Nomination: DC'er of the Month: January 2021

Who is worthy of this honor?

More rules and policies are below.

Nominate the best and the brightest!

Q: What is the [H]ard|DCer of the Month?

Every month, the team gets a chance to choose someone they thought contributed greatly to the team, and give them a bit of recognition for it. At the beginning of each month, a nomination thread is held. Here is your chance to nominate whoever you think deserves recognition. Someone can be nominated for any reason. It does not matter if they designed some massive piece of software to help the team in some way, or simply added a few boxen to ramp up their production.
Click to expand...

Q: How do things work?

Nominations are held for 10 days starting on the 1st of each month. The nominated people move onto a poll and the Poll will be open for 10 days following the end of the nomination thread. The remaining part of the month is reserved for congratulating the winner and have fun. Same as before, vote for whoever you want, for whatever reaons you want. If there is a tie, a runoff will be held. After the winner is chosen, they are interviewed so the entire team can see what makes them tick.

For the [H]ard|DCer of the Year, there is no nominations thread because the only worthy candidates is the [H]ard|DCer of the Month winners for the current year. The poll to choose a winner is done in 2 steps : The first poll will include all 12 winners for the current year and we select only the best 4 winners which will participate in the next round. If there is a tie in the first 4 ranks, the tie winners will move together. In the second round, the one with the most votes will be declared the winner but if there is a tie, a runoff vote will be held. Each step will last 10 days.
Click to expand...

Q: What does the winner get as prize?

Being that there is no cash flow funding the [H]ard|DCer award, there is only so much we can do in the way of prizes The [H]|DCers do not have a physical prize, but thanks to Kyle and the rest of the gang, we still have something to give winners. All winners will receive a custom title showing off their achievement.
Click to expand...

Q: Are there any rules for this?


Past winners cannot be nominated until one full year after they last won.

You cannot nominate yourself.

Hard DCer of the Year winners are excluded forever.

Any contestation or question about the nomination thread should be done via PM.
Click to expand...

Where is motqalden or ChristianVirtual and the past winners list?
M 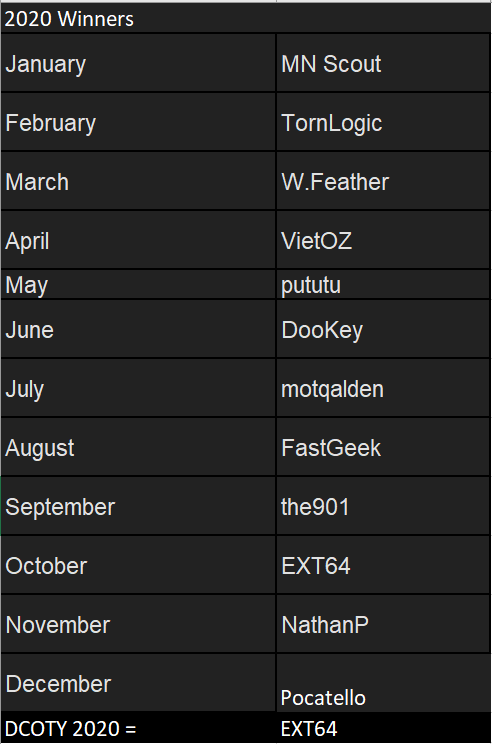 So basically no one on this list except MNScout can be nominated. Anyone else on the team is free game unless previous HDCOTY.
Last edited: Jan 28, 2021
M

I Nominate applejacks because he is a WCG beast that i keep chasing but i am making very slow headway if any at all.
E

I nom Holdolin, for some truly amazing MW and PG numbers (shoot, I need to fire up MW asap!).

I also nom WFeather, as even though he isn't eligible yet, he needs the full 12 months of opportunities to get a win!
P

So EXT64 ... one day after winning Hard DC'er of the Year... you nominate W.Feather ? and he is not eligible. Awesome.
W

Pocatello said:
So EXT64 ... one day after winning Hard DC'er of the Year... you nominate W.Feather ? and he is not eligible. Awesome.
Click to expand...

EXT64 is my nomine, such a [H]ard folder that one is, and a hungry hippo at that!
E

LOL. Perhaps we should block me from nomming too? At least I had one real nom!
P

W.Feather said:
EXT64 is my nomine, such a [H]ard folder that one is, and a hungry hippo at that!
Click to expand...

That is very helpful, W.Feather . As our newest dude of the year... he is not eligible. But you knew that.
E

You're right! He's so helpful, I think he deserves a nom this month! Great idea Pocatello.
P

Any more nominations? First day of February... let's get rolling on the January elections.

Please submit your un-qualified in-eligible names as soon as you can make time for a silly meme.
P