I figured a few people here might be interested.
My Switch was a launch switch and has seen thousands of hours of use.

About a week or two ago my switch started to sound like a jet engine going off, I knew it was time to replace the fan. I've been expecting this for a while so I already looked at some tutorials.
One thing lead to another...

So here we are. 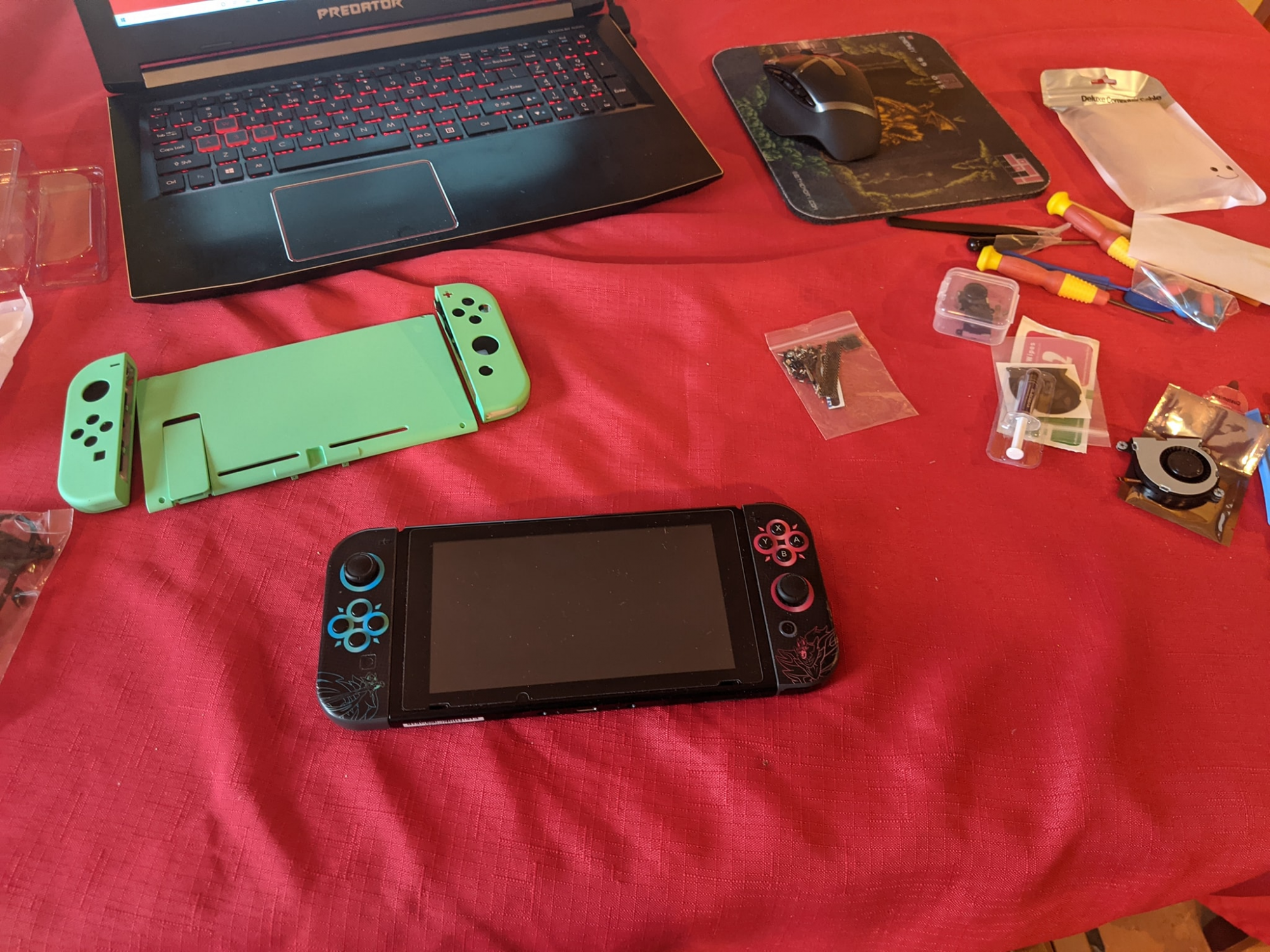 My switch! When Sword/Shield came out I decided to put those stickers on my joycons, mostly to cover up all the grease shine that had accumulated on them. They've been holding out ok.
You can see the new shell to the left, the new fan to the right, and the replacement joycons above. 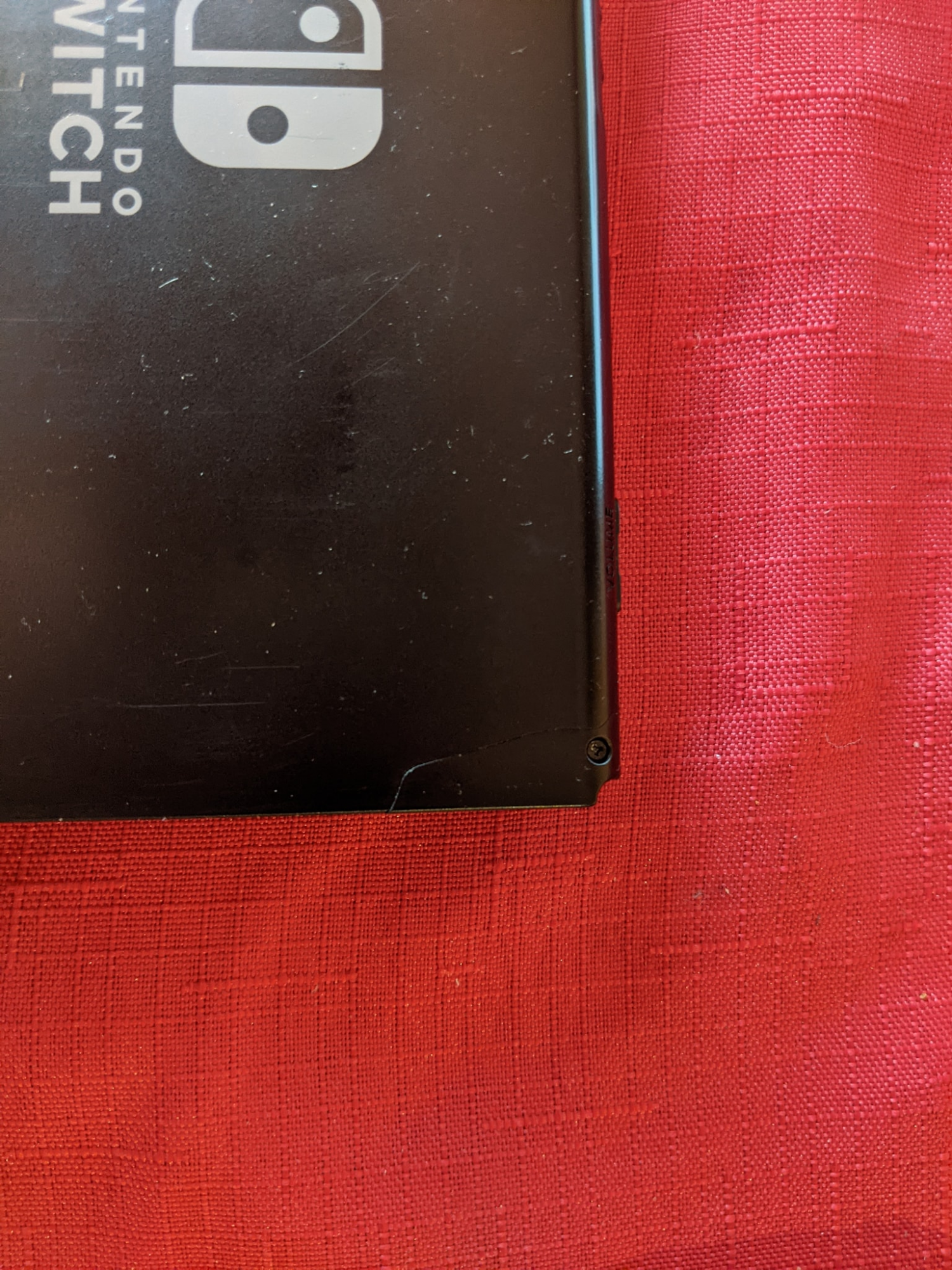 The crack in the corner of my swich, its been there for years but I do expect that it probably lead to more pressure onto the fan, part of the reason for its noise these days. 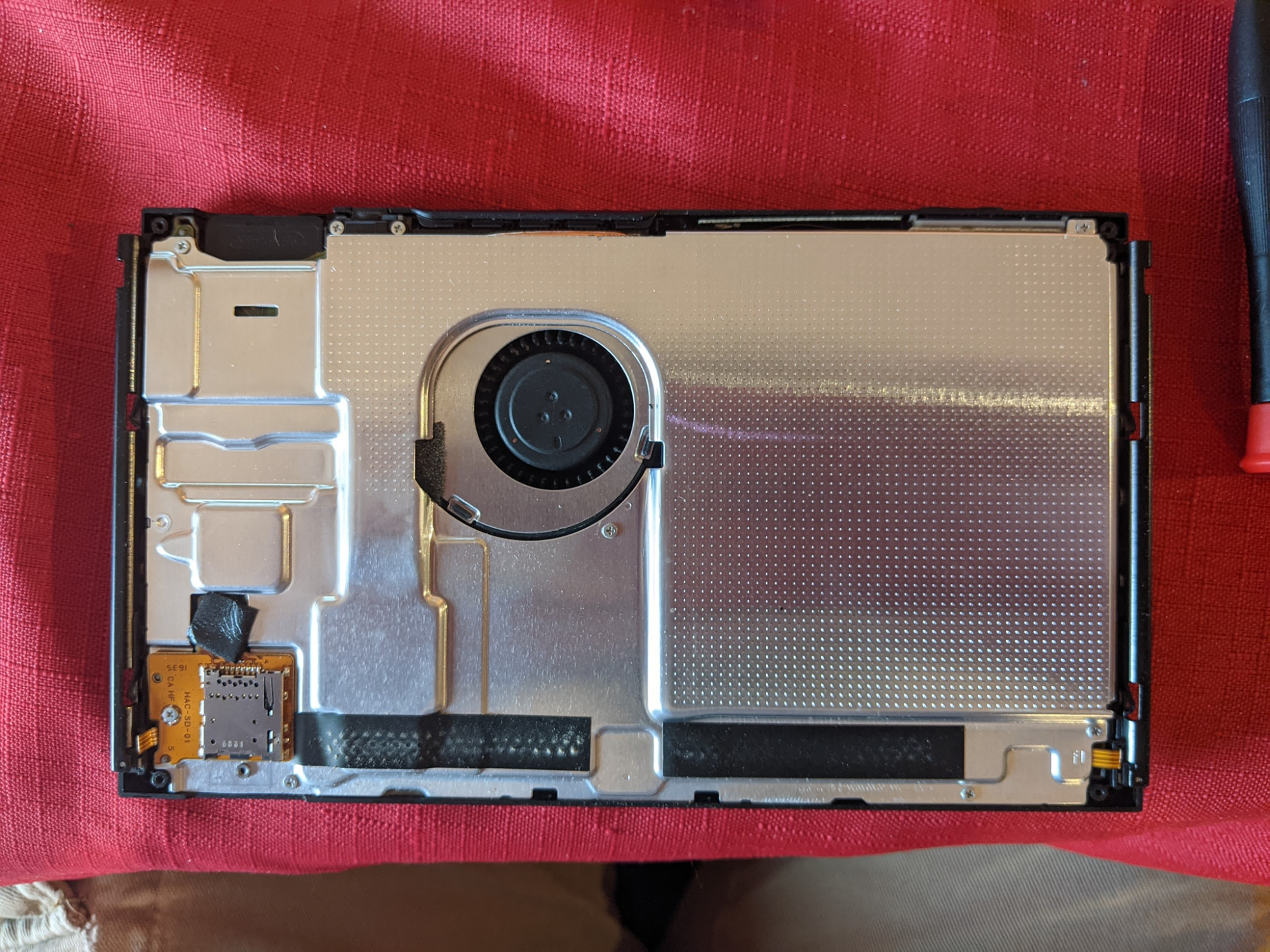 The back removed, this is basically just one bit sheet of metal that is likely mostly for rigidity but also potentially for heat distribution. 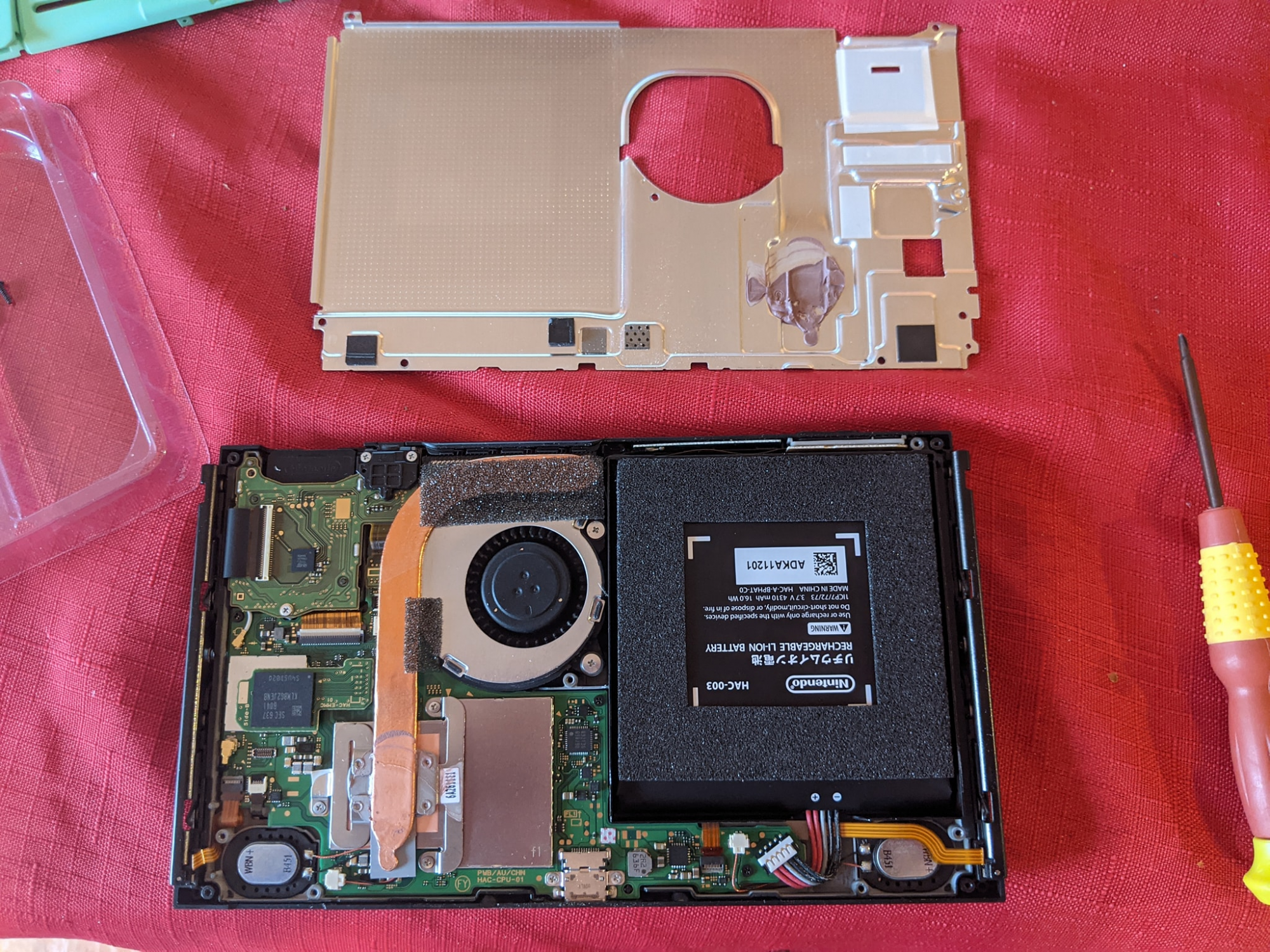 I was surprised that they bothered to put thermal paste above the heatsink, connecting it to the metal plate. All the thermal paste in this thing was dry and cracking, not a surprise at all at this point. 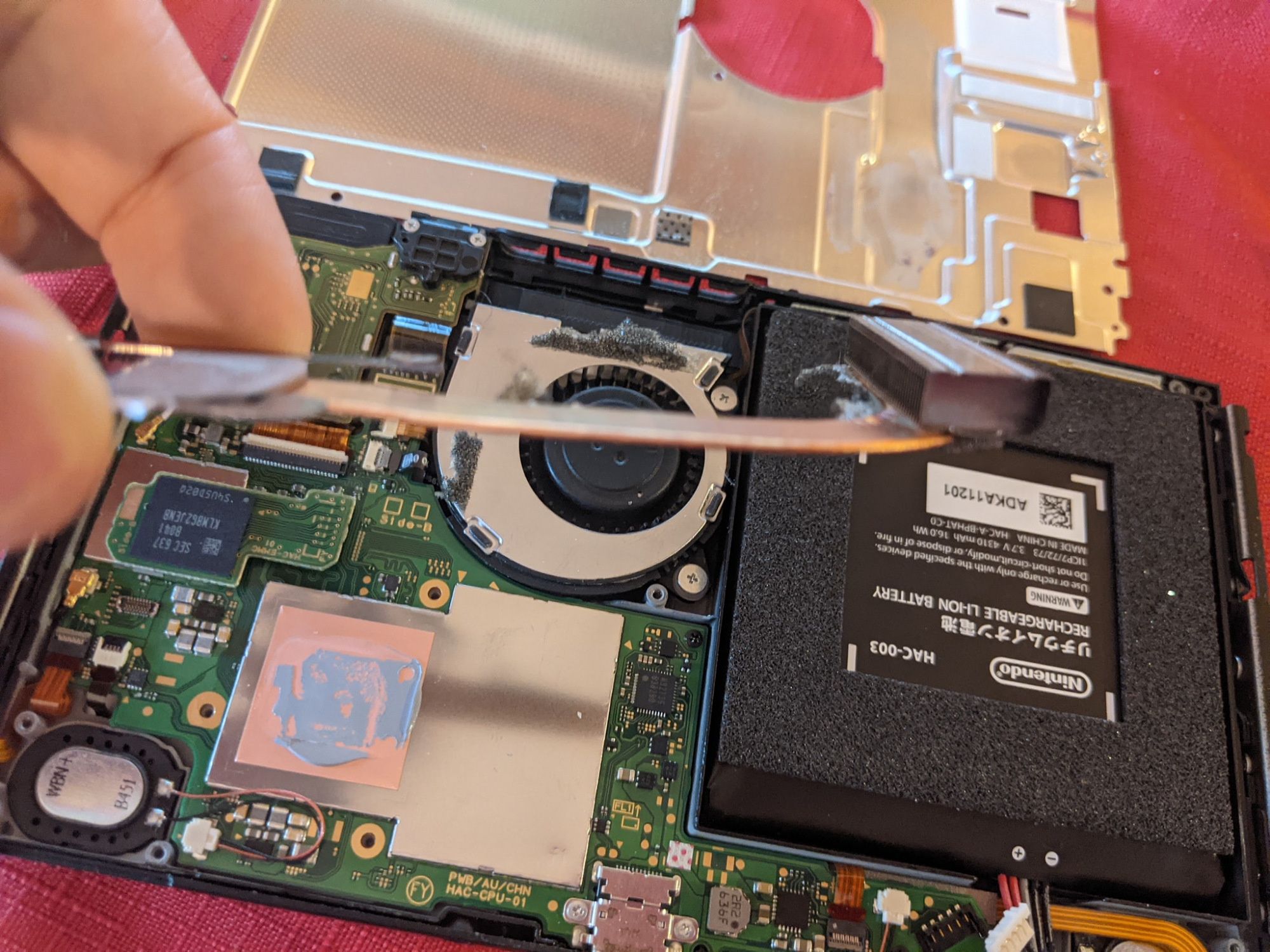 This is the entire switch heatsink. That tiny, wafer thin heatpipe and not even enough fins to cool an NVME. Crazy. I didn't have the guts to remove the metal plate that hides the processor, but i'm sure its down there. I cleaned up all the dried thermal goop and replaced it with Noctua NT-H2 as I still had some left. 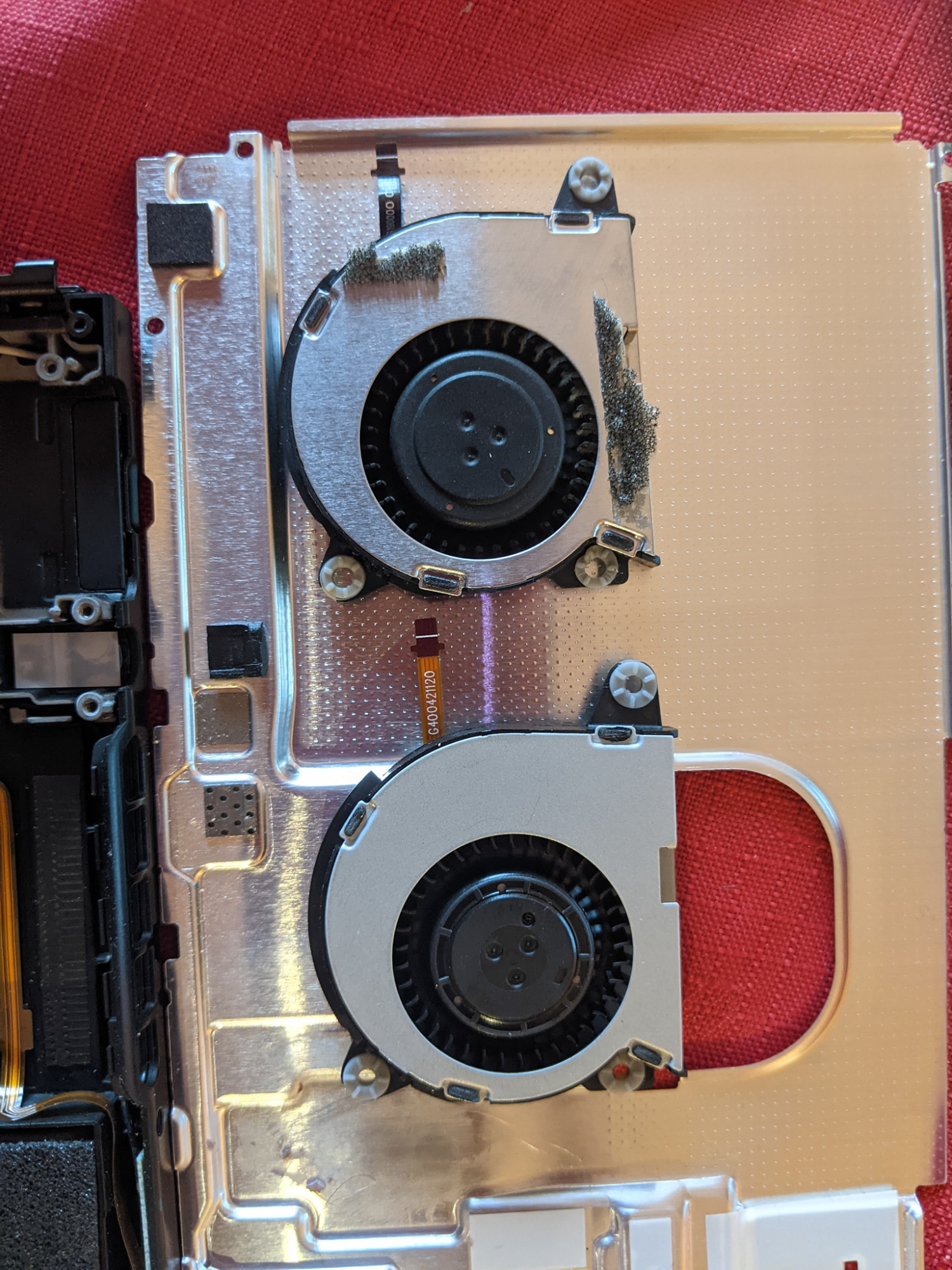 Old fan on tap, new fan on the bottom. Exact same size, different manufactures (Original was Delta, new one is Nidec). They claimed the new one is "cooler and quieter" but we'll see if that happens. Installation wasn't that bad. 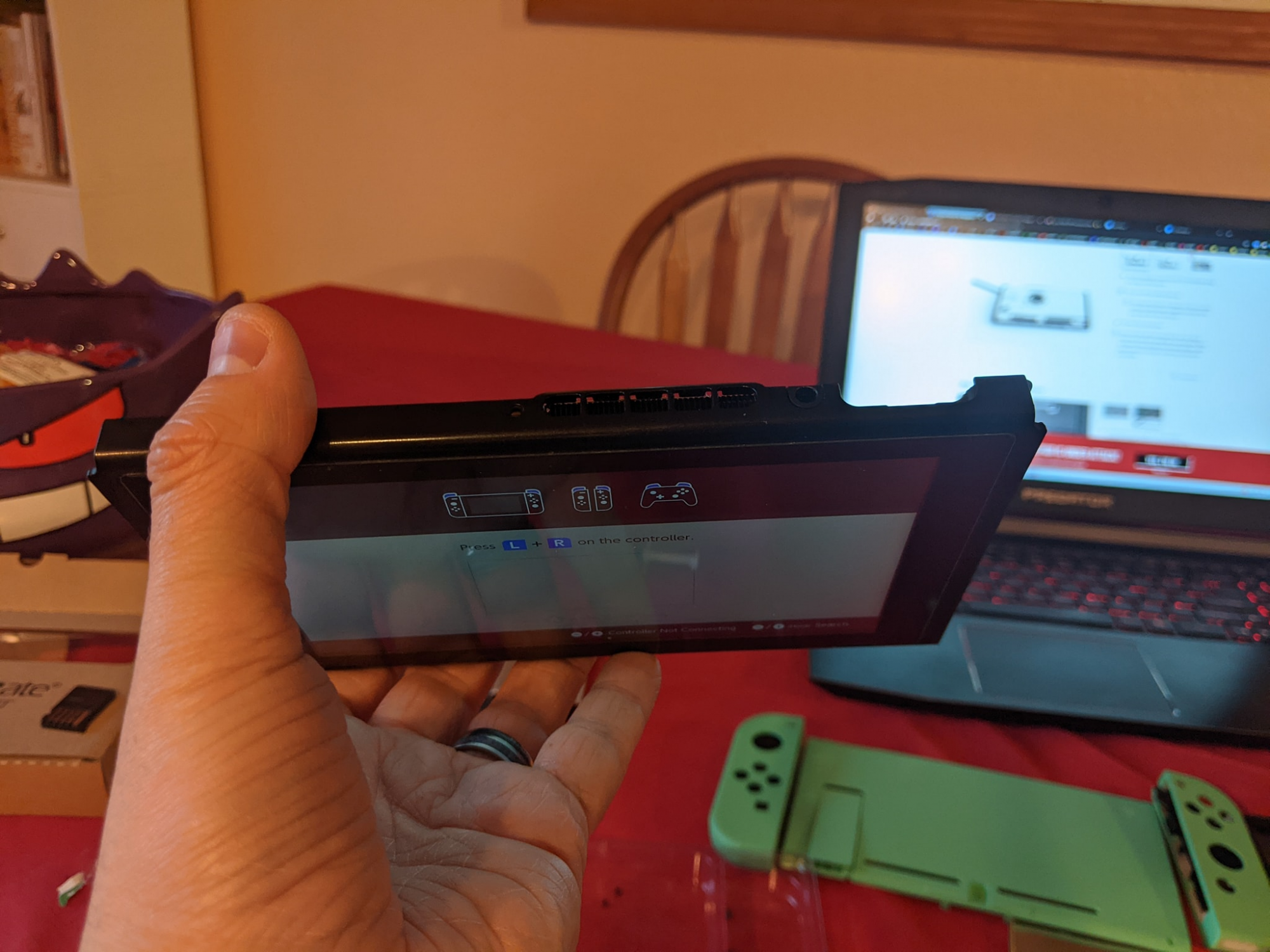 Testing to make sure everything works before I fully put it back together. It turns on! The fan spins! Sucess! 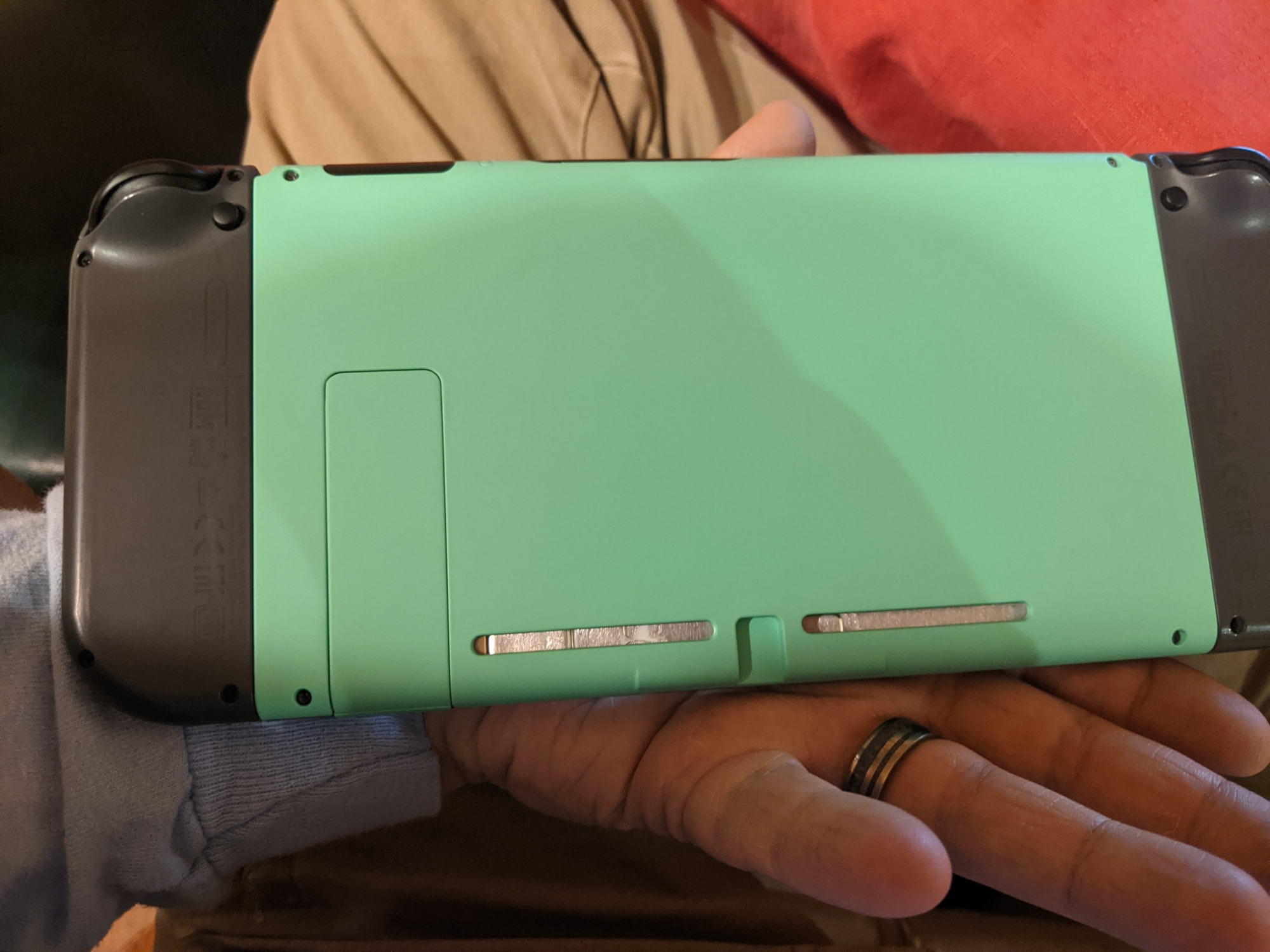 The new back shell! I was feeling pretty good at this point. I didn't bother installing the tiny, Unnecessary taped on fan grills, airflow matters! (it likely doesn't make a difference at all.)

I did have a large bit of frustration with the Micro-SD daughterboard connector. It just didn't want to snap in and it took me quite some time to finally get it connected correctly. 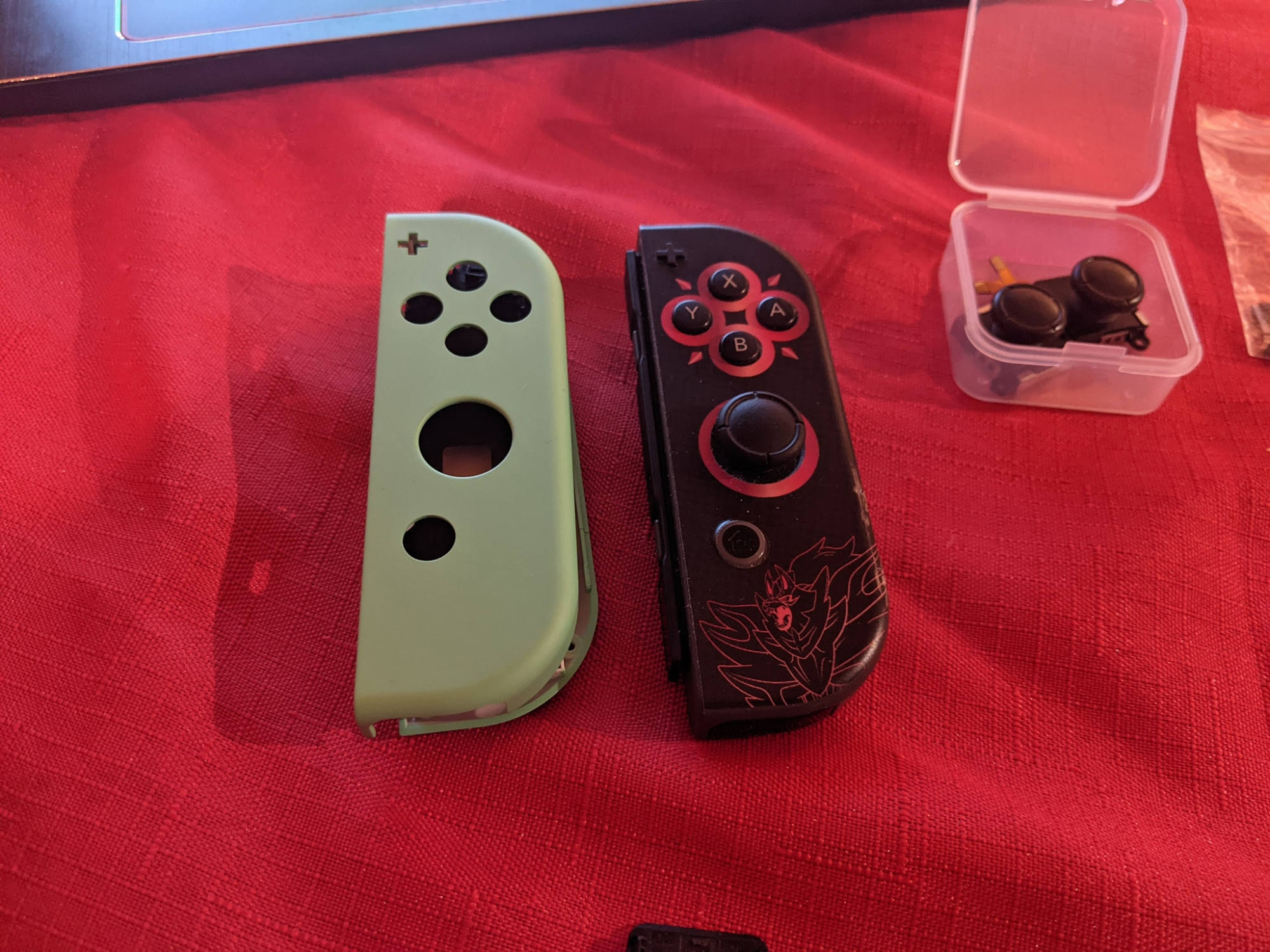 Just replacing a shell and a joystick, shouldn't be that hard, right? I've been building computers for years and messing with electronics forever... How rough can it be? 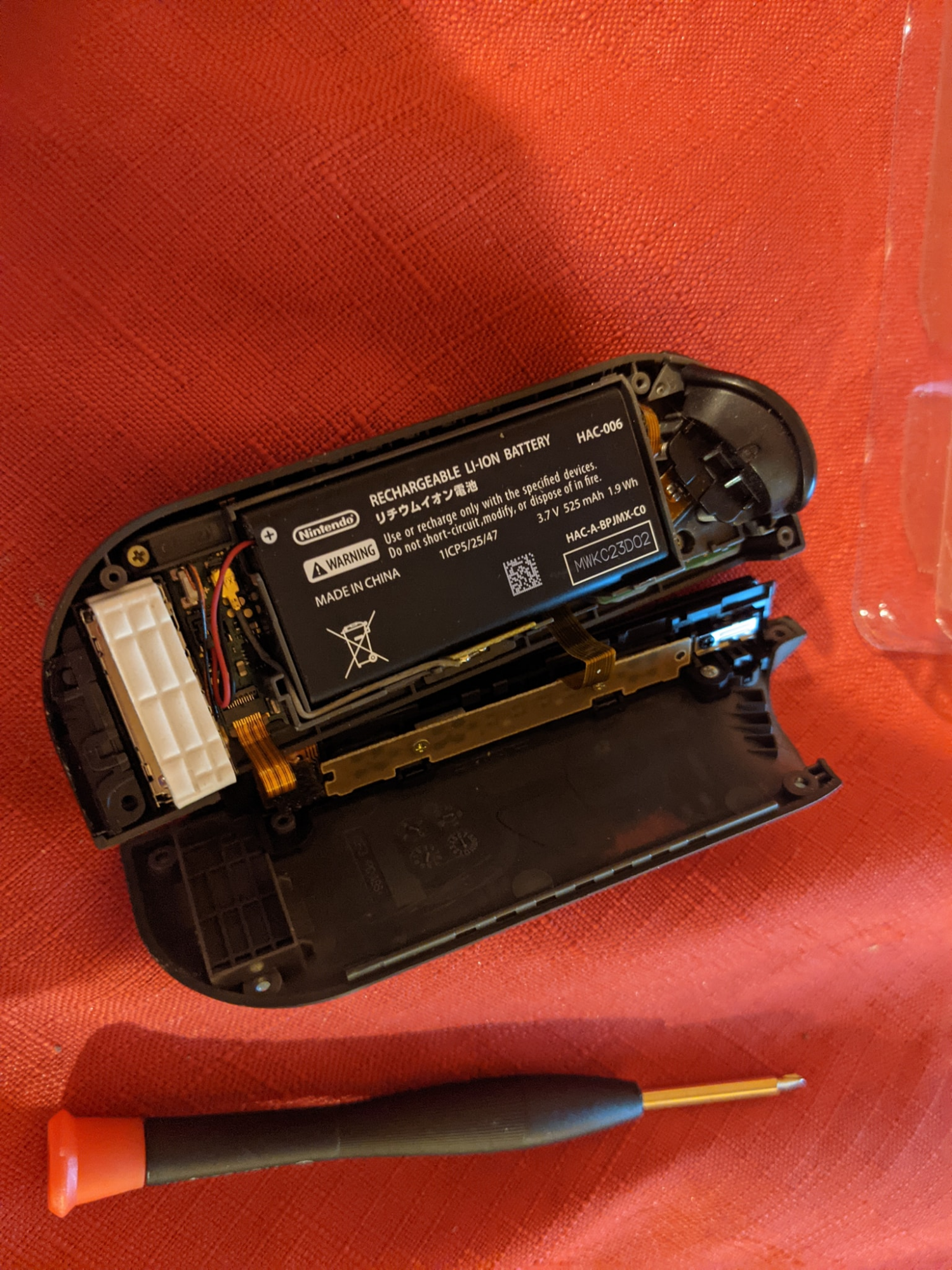 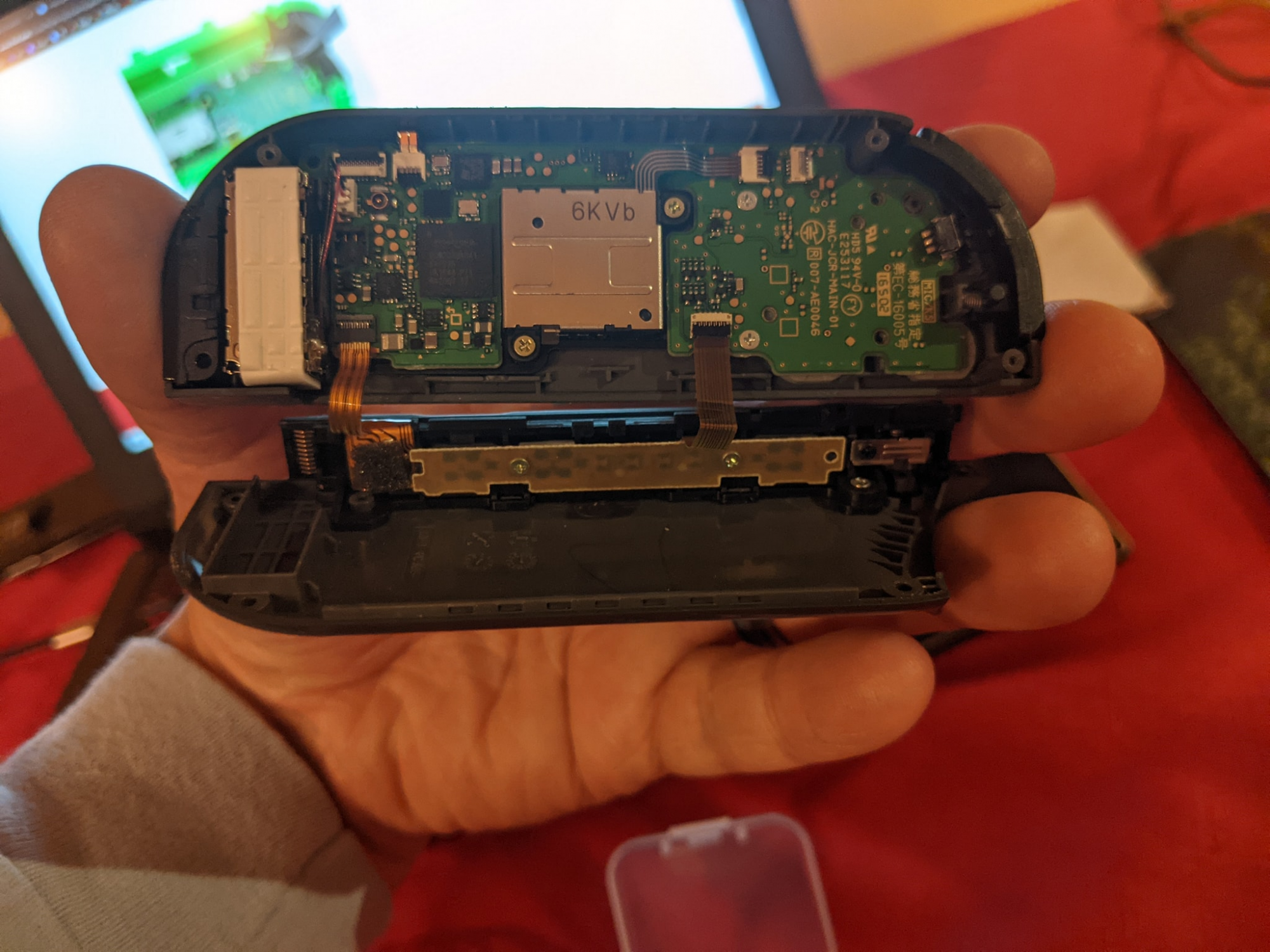 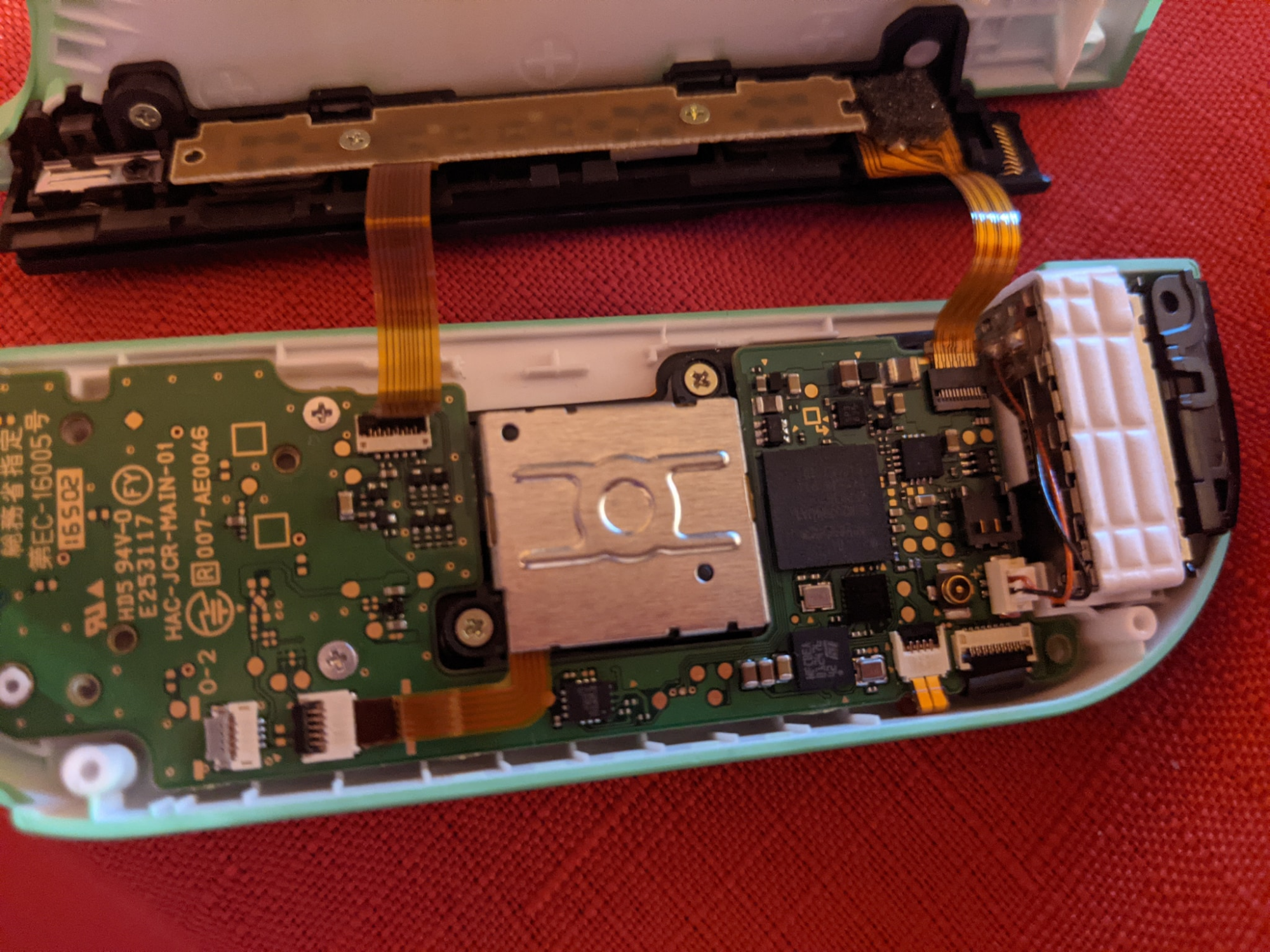 This picture was probably over an hour later. I made a few mistakes and undid the ribbon cables that connect the joycon backplate, getting those back in was difficult. It was also absolutely unnecessary to remove them.
Aligning the rubber membrane and buttons to the new shell took some coaxing, but this is a picture with the new shell and the new joystick attached! 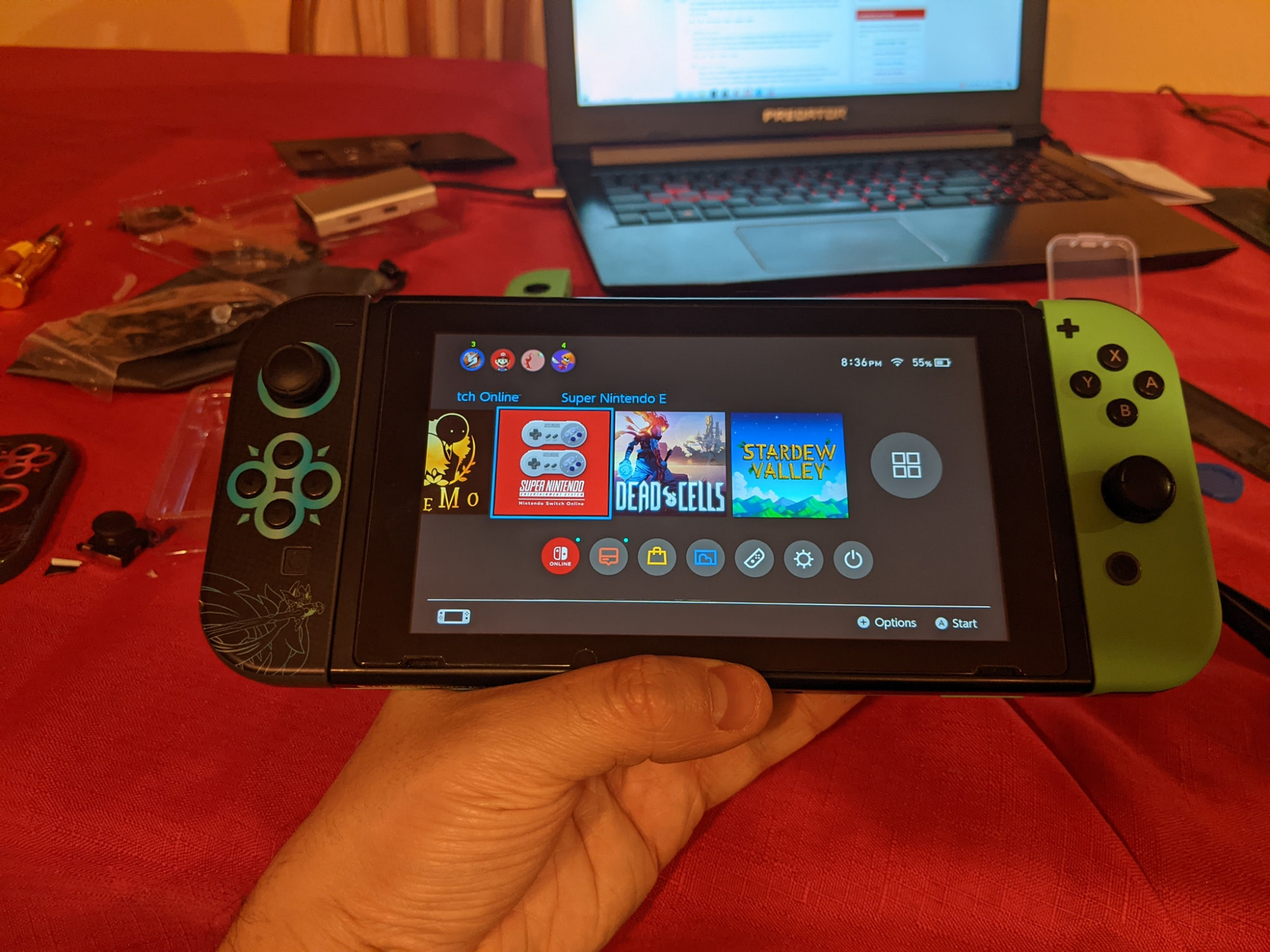 After that, getting it back together and working was pretty simple! Or it would have been, I accidentally pulled out a ribbon cable somewhere along the way so after I got everything back together I had to take the whole joycon apart again to move a single ribbon cable about 1mm and THEN rebuild it and, finally success!
I'm done with 2/3, gonna go for it and finish the left joycon as well. 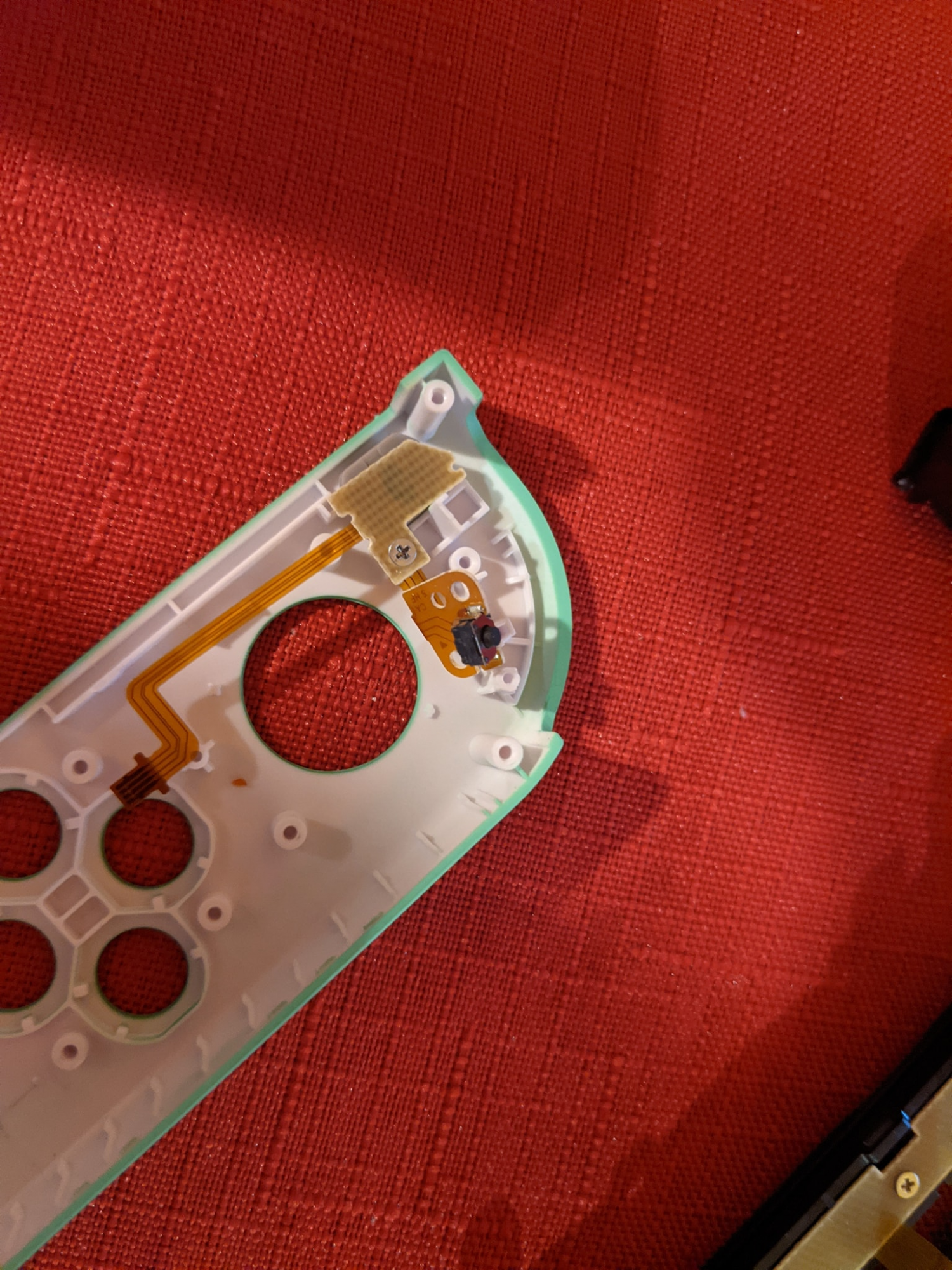 I mostly forgot to take pictures of deconstructing the left joycon. I was a few hours in at this point and after taking apart and rebuilding the right joycon twice, i learned a LOT.
Look at the size of these tiny little boards, one is for the - button, the other is for the ZL, both have the worlds tiniest fucking screws to keep them attached to the shell. 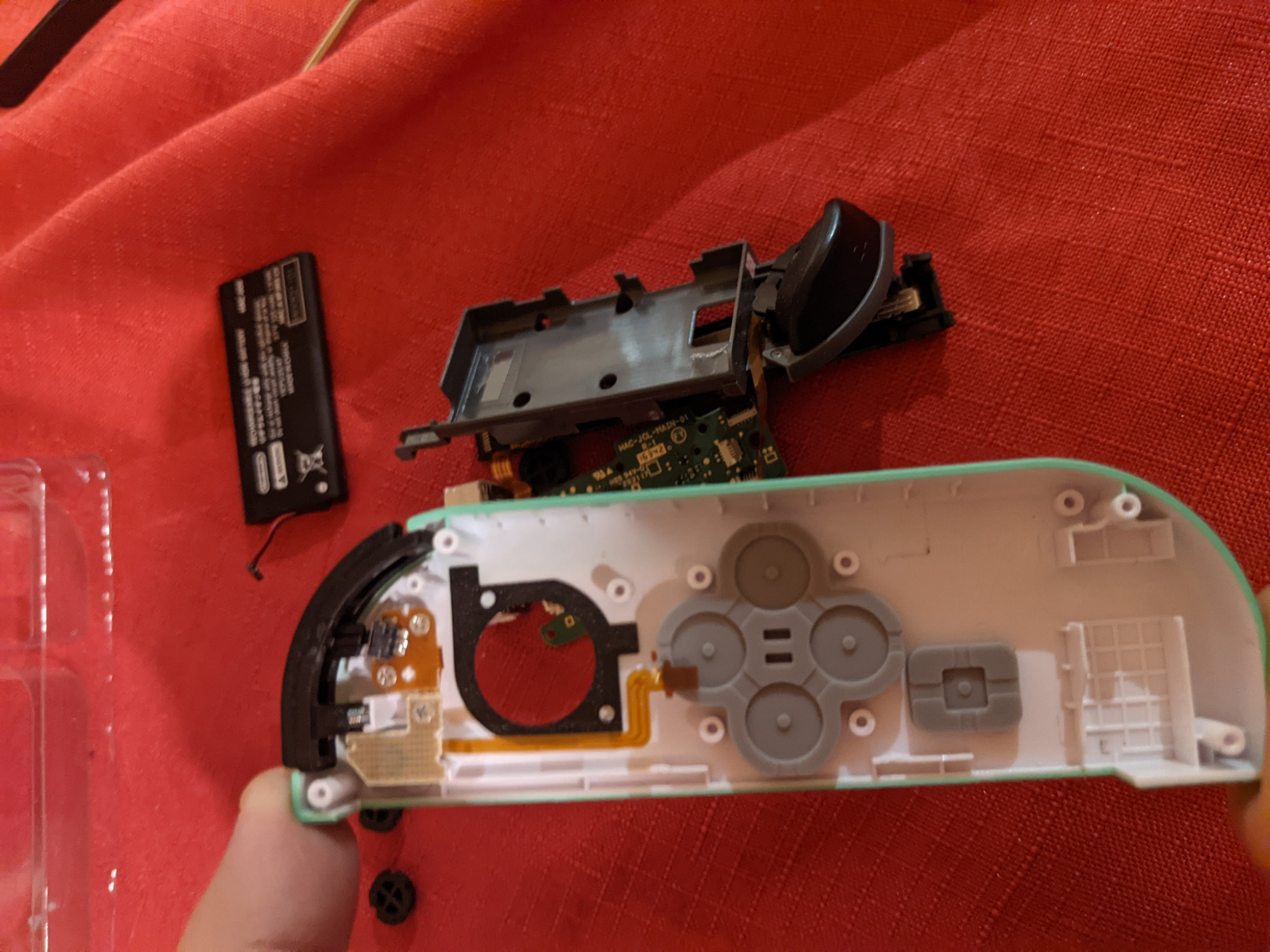 A shot of the button membranes. Luckily the butons and membranes can only fit in in a single direction, so its almost impossible to put the wrong button int he wrong spot. It's still a finicky bit of hardware before you get them secured with a board behind em. 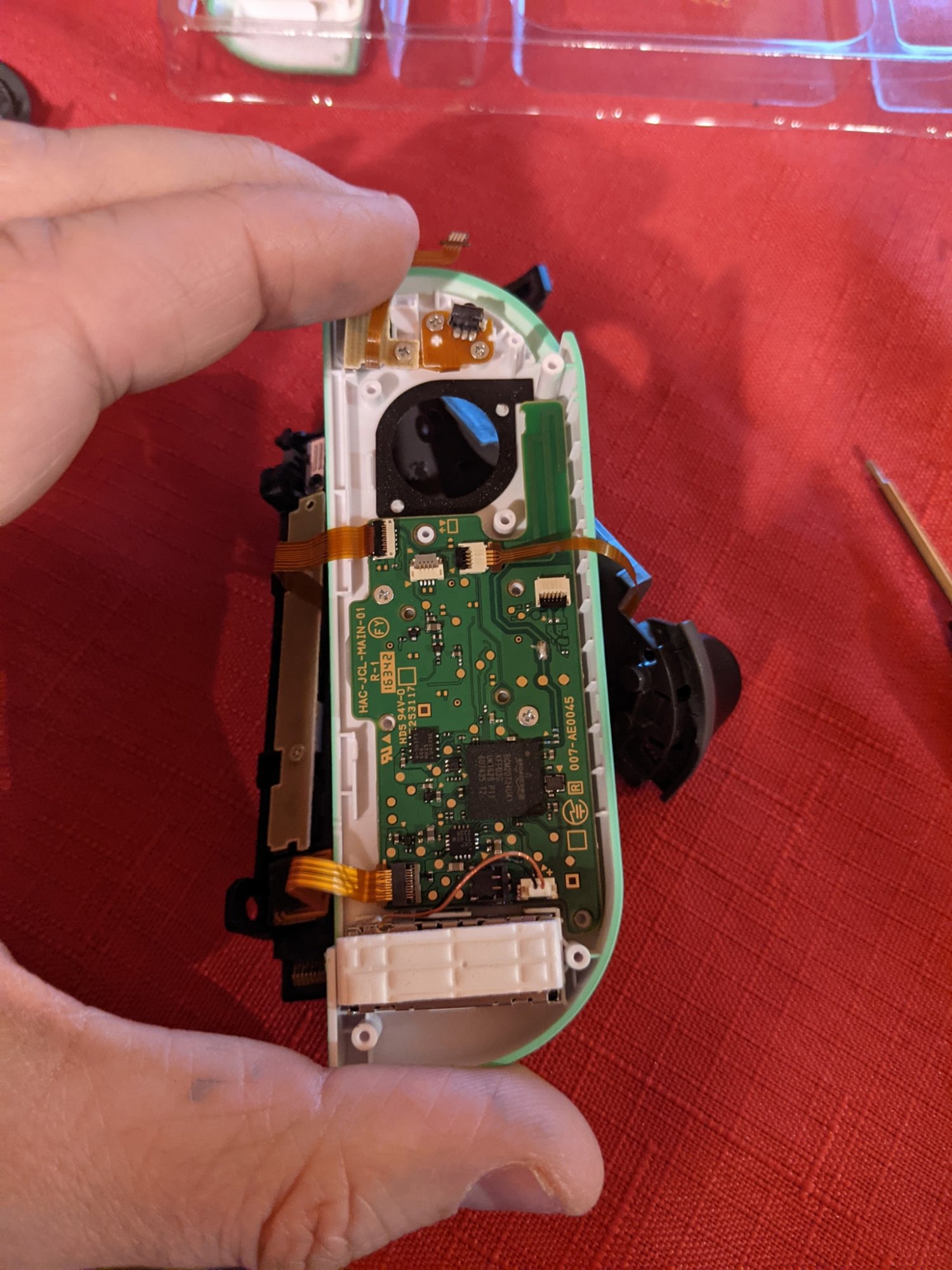 As I learned a bunch from the right joycon, I left as many ribbon cables as I possibly could attached on this side. I just had a bunch of dangling bits. The cables criss cross over this board and the way you reinsert them has to be in a very specific order. Getting the joycon into the hole on this side was more frustrating than the right side due to all the ribbon cables. 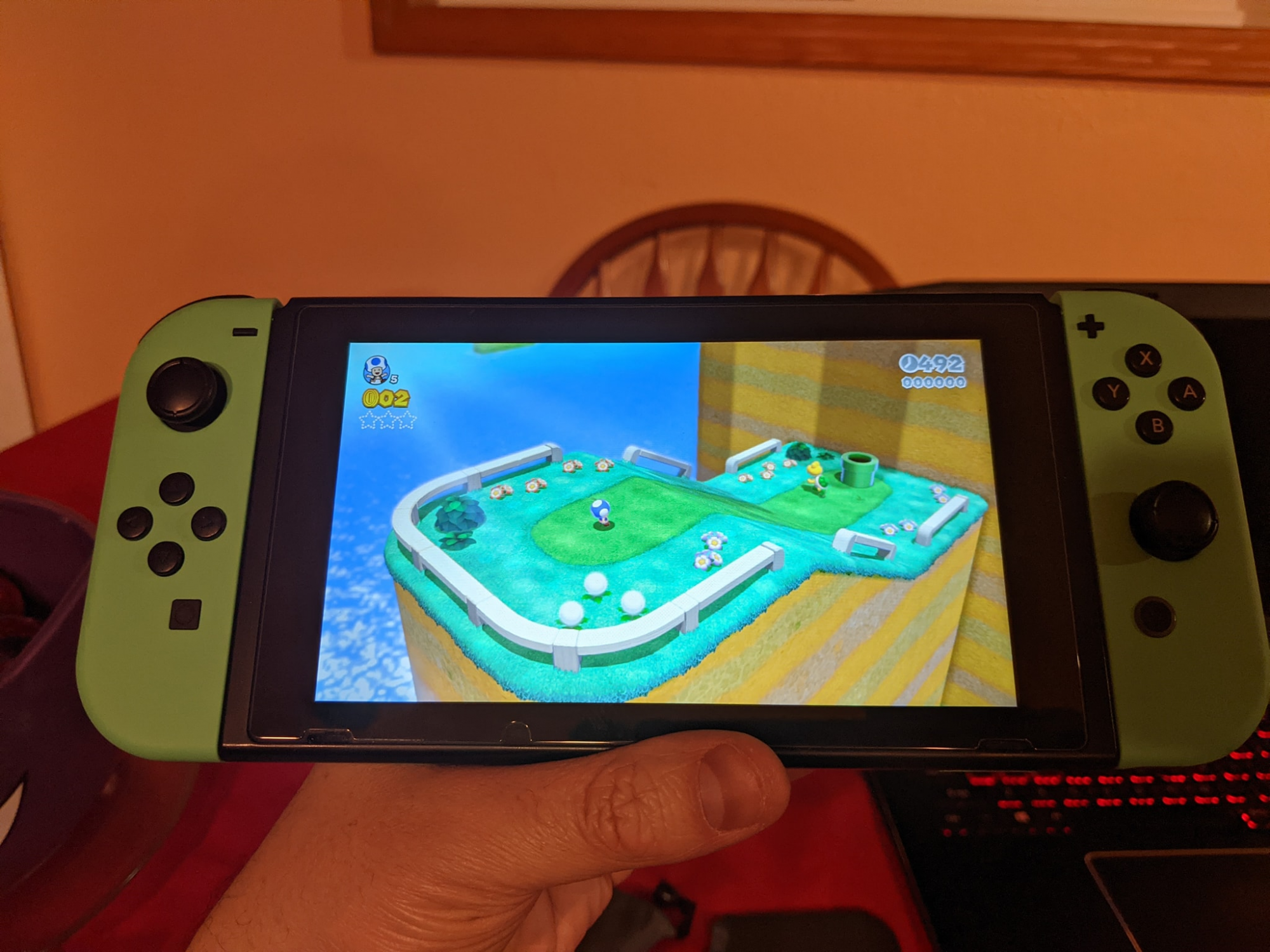 Success! Both joycons and the back are replaced. It's now a pleasing mint green, and the new shell has a better texture/type of plastic than the switch default one. Even at full load the fan isn't loud enough to hear it, and I haven't detected any particular hotspots on the back. Job well done. 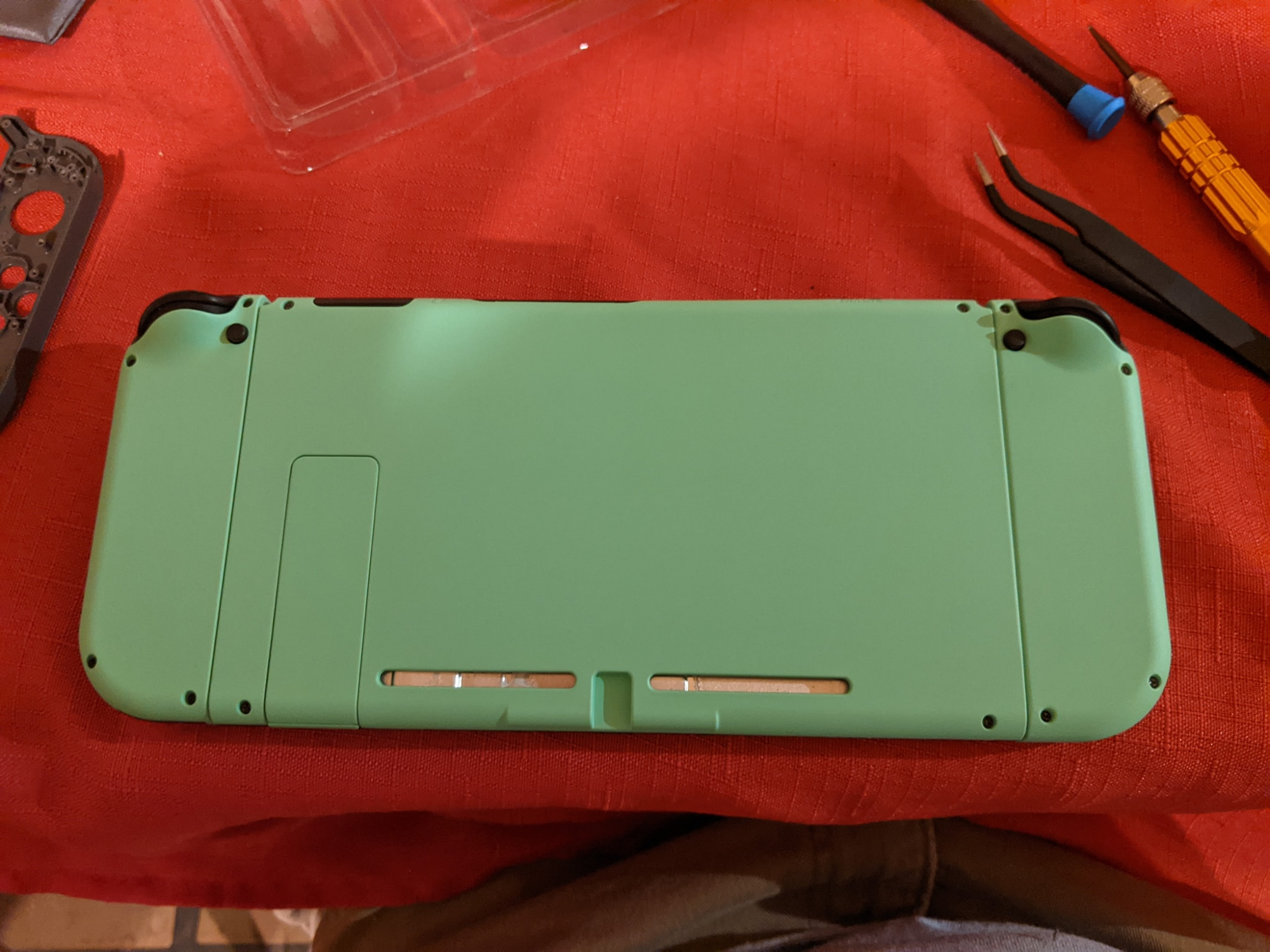 In order order of frustration level.
1: replacing switch back shell, piece of cake.
2: replacing switch fan: not bad, lots of little screws but nothing unreasonable
3: replacing joycon joystick - left, did this one second so I learned from my mistakes on the right!
4: replacing joycon joystick right: follow a guide exactly and don't remove any unnecessary ribbon cables and you'll be fine.
5: replacing joycon shell/buttons - this is awful. Don't reccomend it unless you're *super* good with tweezers and tiny, tiny fucking ribbon cables and the smallest screws possible. Worse than some of the more frustrating laptops i've had to open. Better than phones with glue.
Last edited: Mar 8, 2021

Nice to know, I have a launch Switch as well and while it doesn't have nearly the use as yours does, I expect this will eventually be needed.

MavericK said:
Nice to know, I have a launch Switch as well and while it doesn't have nearly the use as yours does, I expect this will eventually be needed.
Click to expand...

I have multiple titles with hundreds of hours. Zelda: BOTW, Smash Bros, both Xenoblades.
It adds up. (Then probably another 2 dozen titles with hours in the double digits)

I know that MH rise is gonna likely be my most played game of 2021 so getting this done now was partially in preparation for that.

I'm tempted to open it back up in the future and maybe do some minor modding around the processor/heatpipe arrangement, apparently the RAM chips are also underneath that shield, but I'll see how well the relatively minor act of "new fan and new thermal grease" does.

Not sounding like a damn helicopter is already a huge improvement.
C