Does a Steam preorder grant immediate access to the Beta?

Riccochet said:
Maybe reinstall the game or check for overall system stability? I'm on a similar setup and have had no such crashes in 30 hours of game play.
Click to expand...

Lots of posts about it in the Steam forums. That's where I learned that setting everything to low will let you back in.

Bankie said:
Lots of posts about it in the Steam forums. That's where I learned that setting everything to low will let you back in.
Click to expand...

The game will reveal instabilities with hardware. A system rebooting under demand like that could be multiple things, but it's not going to magically get better. You've got a bad component somewhere. Setting things to low allowing the game to launch again could be due to the shader cache, or something else, going corrupt. I've found that random reboots are almost always bad memory, or of course the PSU.
C

They really revamped the colors for spells. I might try it on my vacation next week but don't want my GPU to explode. Or get my char wiped cause its in beta.

Comixbooks said:
They really revamped the colors for spells. I might try it on my vacation next week but don't want my GPU to explode. Or get my char wiped cause its in beta.
Click to expand...

At this point i'd just wait if you knew you were going to play it anyways. Honestly, the game runs great, and i'm somewhat surprised they haven't just released it.
C

This game have controller support? not sure if I want to be hunched over the keyboard for 5000+ hours and turn into a crayon.
C

Comixbooks said:
This game have controller support? not sure if I want to be hunched over the keyboard for 5000+ hours and turn into a crayon.
Click to expand...

For the beta players. Is this game solo friendly? What if I don't want to pursue quest with a group?
C

celwin said:
For the beta players. Is this game solo friendly? What if I don't want to pursue quest with a group?
Click to expand...

I'm Level 22 and haven't grouped up yet, though its an MMO so if you want to run dungeons or whatever they have in store for the final release, a group is the only option.
C

WolfheartFPS live streams New World, along with other RPGs.

I put aside my dislike of MMO's and preordered to try the beta out of boredom. Not finding myself on the hype train after spending a whopping 41 hours in it (I guess I'm a masochist and put up with going to the same places over and over, and over again). These quests, or missions I guess, are fucking stupid... They send you repeatedly to the same places you've been countless times before to do the same exact stuff - loot two chests here, loot two chests there. Or, go get this amount of wood, stone, leather, fish - again and again. When I was level 20 I was going to areas filled with level 8 mobs, or, I was being sent to areas with mobs up to five levels higher than me. But this is what the foundation game loop is. Then there the lagfest wars where you will often find yourself frozen (I get it, it's beta - but nearly 30 days to release and how many betas have there been?), and invasions which I haven't done. Open PVP is rare as often people trying to level don't flag themselves unless rolling in numbers. There's also the cool walking on the ground instead of swimming; at one point I fell off a bridge in the middle while getting attacked when I was reading something and had to try and walk to the shore - ended up drowning. Not sure if there is any mechanics regarding faction balance or incentives to join underdog factions. Mob variety isn't great.

I like the sound design a lot. Given everything I said in paragraph one I think it's a smart move for now to limit characters per server to one - on the other hand if someone is into self-flagellation why not let them. Crafting is okay but not very involved; gather this and that, make selection, hit button. I'm probably alone in this, but I miss early EQ2's crafting system that required some effort from the player to react to things that would then impact the item. The ability for companies to declare war on one another and the ensuing war and maybe the corruption invasion and how it can impact their city is cool in concept.

Long story short, they need to push this shit back and reexamine what they have and how intriguing it is. In my opinion it still needs a lot of work, but I guess I'm in the minority. If it gets stale in the first starting area it's a problem, but again I guess I'm in the minority and a masochist as I kept playing. Seems like there are a number of people pointing out issues but they do so out of one side of their mouth while the other praises the game. I can't help but feel this game isn't close to being finished and not warranting any real excitement for now.

This will be an instant refund once beta is over for me. Everything I said is just my opinion - neither right nor wrong and taking nothing away from someone that is in love with the thing. For me though it's a final nail in the coffin as far as MMO's go... They just feel like a chore (this one currently is a particularly painful one to me), the things people chat about annoy me (this morning people were debating animal rights), and I can do without the cringe stuff of people playing their music through their mics while other players have a WoW moment.
C

I hope the release map is larger than this, about 40 hours in already and I feel I've seen everything. And that's unintentionally.
C

Roleplay as a fetch slave, what an exciting wonder! Can really get into character with that one

Pushed back to September 28. 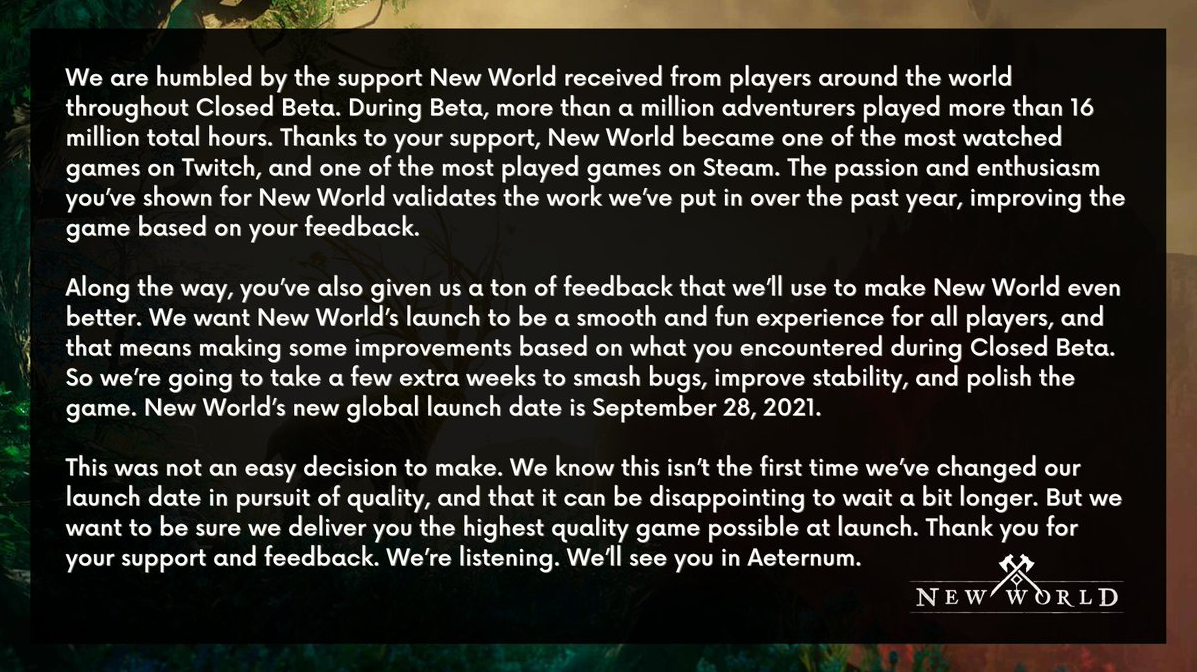 Armenius said:
Pushed back to September 28.

lol, they are really winging it. wouldn't be surprised if they delay it till the holidays.
C

Was suppose to out earlier this year like April.

They pushed out the beta, received feedback and are now attempting to fix those issues.

There's nothing wrong with that.

GOD'SlittleSERVANT said:
They pushed out the beta, received feedback and are now attempting to fix those issues.

Actually quite refreshing considering the slew of recent high profile release that released with no delay after it was clear the betas had issues.
E

Hmmm 16 hours of average playtime. Is that good or bad?

Armenius said:
Actually quite refreshing considering the slew of recent high profile release that released with no delay after it was clear the betas had issues.
Click to expand...

Most games are like that. 1 week of beta, then 2 days later the game is released with nothing fixed.

While I didn't run in to many issues in New World, I'd imagine they are not only fixing bugs. But, also fixing some story line and PvP issues as well. They got a lot of feedback to sift through.
C

Eshelmen said:
Hmmm 16 hours of average playtime. Is that good or bad?
Click to expand...

In the beta? All that matters if if you figured out if you want to play the full game or not. I managed only level 26 after 30 hours or so but I saw quite a few level 50s that had to have well over 150 hours in it.
Z

GoldenTiger said:
We know.... It was a couple of posts above yours .
Click to expand...

Did you hear about the delay in New World?

Eshelmen said:
Did you hear about the delay in New World?

It was fun enough in beta even though I only got to lvl 10. Feels like there will be hundreds of hours of fun in it before I quit. I'll give it a try.
P

An open beta for Amazon's New World MMO will take place from September 9th to September 12th...this beta will allow anyone to try New World out ahead of its eventual September 28th release

While exact specific details weren't shared, Amazon also discussed its desire to support New World with post-launch content and updates...one thing that was hinted was a common player request for more supernatural weapons and elements, which will arrive in some form "shortly after launch"...additionally, more group content and expeditions are on the docket toward the holiday season....

Open beta launched yesterday and lasts through the weekend. There's a button to request access on the steam store page. It can take a while to get the approval email but you can still install/play immediately.

I played to level 10 in about 2.5 hours. Servers seemed relatively stable and I didn't experience any CTDs. Combat is a bit weird--feels like playing a really easy souls game with the dodges and light/heavy attacks. I think it's neat for an MMO to have more 'actiony' mechanics. I suspect/hope combat gets more challenging at later content to incentivize weapon swapping. Lots of crafting options but I didn't dig into it much. Overall I'm undecided but leaning towards 'worth it'. No subscription fee so worst-case scenario I get ~20 hours out of it and it about equals any other game in play/$.
You must log in or register to reply here.
Share:
Reddit Pinterest Tumblr WhatsApp Email Share Link
Top