Just put a new build together to replace my 5yr old office PC:

System has been running a month. Converted from booting from the 860EVO to a cloned Win10 install on the 970 EVO+

Things seemed decent until approx a week ago, whereupon I had a couple of unexplained reboots when I wasn’t in front of the machine. Today, the PC rebooted once while I was away from the keyboard and then hard powered off with no warning about 30mins later. Got so bad it would hard power off when just in the BIOS - so nothing to do with Win10.

I’m guessing it’s a PSU issue from what I’ve read of other people’s experiences. Would be very grateful for any similar experiences others have had which might help me RMA the right component first time round.

I don’t have any spare equipment to swap out with this system to try and troubleshoot, so thanks in advance for any pointers!
Last edited: Tuesday at 10:29 AM

IF you get into bios long enough, up the ram voltage to 1.4v. BUT since its crashing there, id suspect psu or board and as you stated, youll need parts. otherwise youre just guessing. any local shops?

Try setting the memory to the lowest speed it will go and see if things improve.
J

pendragon1 said:
IF you get into bios long enough, up the ram voltage to 1.4v.
Click to expand...

Memory voltage was set to auto. System is completely stock, no overclocking currently

Nenu said:
Try setting the memory to the lowest speed it will go and see if things improve.
Click to expand...

Thanks to both of you for the memory suggestion. I’ve disabled the XMP memory profile I enabled a couple of weeks back (3600mhz) and am now running at default clocks of 2138.70Mhz

Was able to run 10mins of Memtest+ 5.01 from UBCD USB without a crash, so have flipped back and am going to enable XMP again and Run Memtest+ again to see how long it lasts 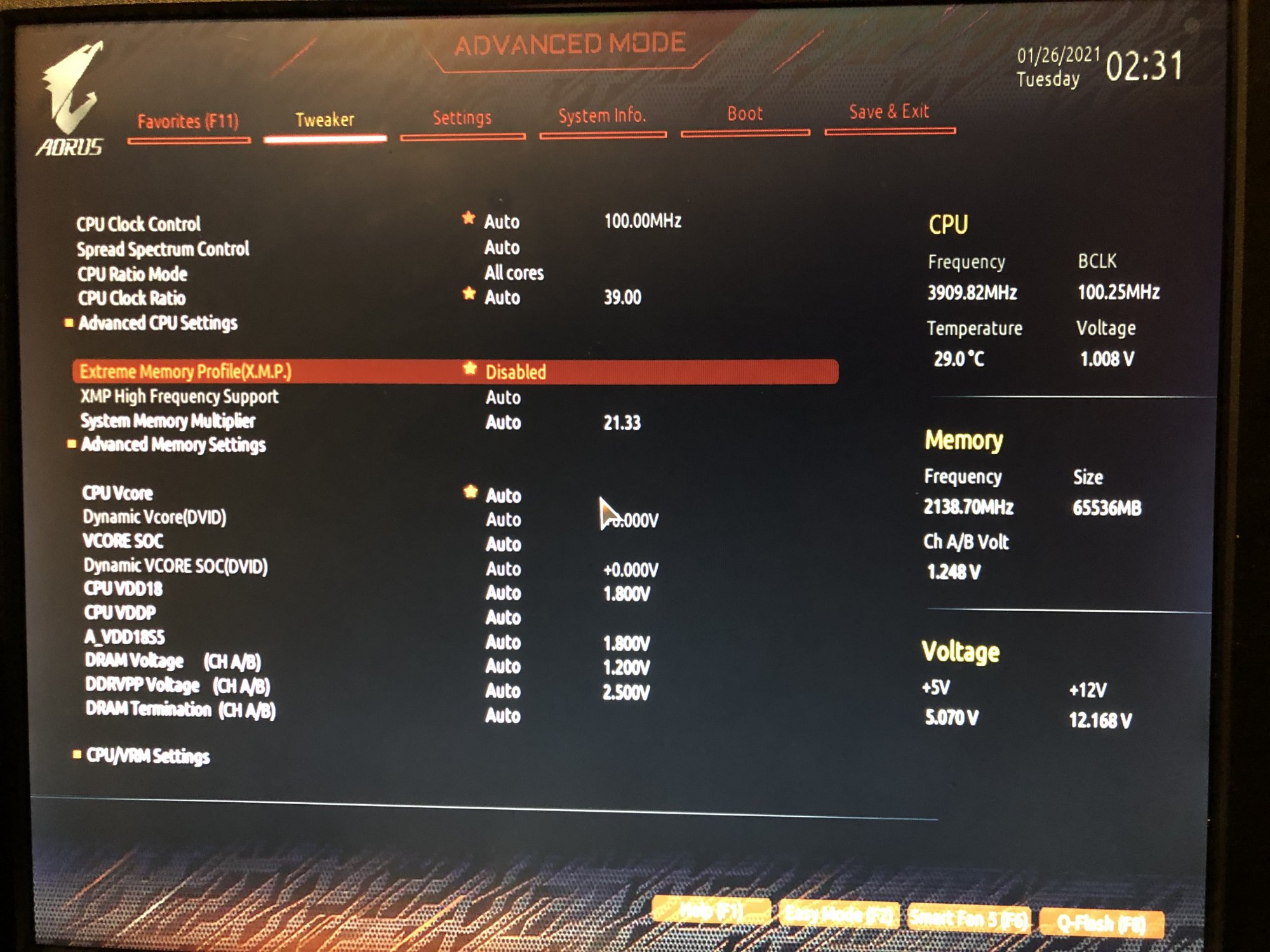 3600 on the ram is technically overclocking it. every set of corsair ram i have ever used needed extra voltage to run at the labeled spec, 1.4v is safe.
J

pendragon1 said:
3600 on the ram is technically overclocking it. every set of corsair ram i have ever used needed extra voltage to run at the labeled spec, 1.4v is safe.
Click to expand...

Good to know, thank you - I may try that, however I’m digging further and going through reviews on Newegg, I see a 4* review by Garrett and a 2* review by Daniel which mention exactly the same issue. Garrett reports his replacement worked fine, so, given that I’m working B&H’s Xmas return period, I may also just flip it back to them and try another.

jw2k_fr said:
Good to know, thank you - I may try that, however I’m digging further and going through reviews on Newegg, I see a 4* review by Garrett and a 2* review by Daniel which mention exactly the same issue. Garrett reports his replacement worked fine, so, given that I’m working B&H’s Xmas return period, I may also just flip it back to them and try another.
Click to expand...

reviews of what, the ram?
J

pendragon1 said:
reviews of what, the ram?
Click to expand...

Ugggh, sorry, late night brain fade - actually not the RAM but the motherboard instead. Seems like there might be quality control issues:
https://www.newegg.com/gigabyte-b55...16813145222?IsFeedbackTab=true#scrollFullInfo

@Daniel: (**)
Cons: Since I've purchased this I've started to have random shut offs with no explanation. Initially I thought it was the power supply but swapping that did not resolve it, the same with memory as it would give the notification of memory error sometimes when it does these random shut downs. Swapping ram did not resolve the issue. The CPU was not the issue as far as I can tell as I purchased the 3700X before this and on the previous motherboard ran just swimmingly.
To go into length: These shut downs are random, and they seem to happen in clusters. The system will literally just turn off as if I pulled the plug. It will then proceed to power on, post, and then either shut down again while powering up or just go along as normal. Occasionally it will shut down multiple times in a row then give me three events: 1 - It will give the memory error code of one long and three short beeps. If I turn off the computer and wait a minute everything chugs along normally 2 - it will power on, the fans will start, but it will not post. What is alarming is that manual holding of the power button will not resolve this and I must literally pull the plug and wait 5 minutes before restarting in which it has so far restarted with no hitch until the next event. 3 - It will power on and everything is fine Activating XMP sometimes seems to make this worse. Even with ram switching and turning off this feature it still happens though.
Click to expand...

Overall Review: Not going into too much detail. Daniel's review below pretty much sums up my experience as well. Random restarts were not due to GPU, RAM, or PSU. Haven't ruled out SDD or Processor, but I think this is a problem with the board. Other than this issue, the board should run fine for what I want it for, hopefully the replacement works as intended. Will update this once I get the replacement. Update: Got my replacement and it's been running for 3 days straight without any issues. A couple of bad ones are bound to slip through the cracks, and I was probably just unlucky. 4/5 eggs. Would be 5/5 if I hadn't received a bad board initially.
Click to expand...

With no gear to test with you may as well start somewhere. If your return window is closing for the mb thats as good a place to start as any. Its better than waiting a month for a gigabyte rma return.
Definitely not what i would normally suggest as a 1st troubleshooting step but you do what you can with what youve got.

Sounds like my issue mine only crashes before the Windows 10 login only if XMP is enabled though!

I did not know XPG (stupid me for not checking) was Adata I hate them I RMA 3 4 GB flash drives (when 4GB ones will still useful) I got 3 more and they each died latter. I guess they want to separate from the name Adata like the cable companies like to do Xfinity = ComCast (*) Spectrum = Charter Communications
*= ComCast is not as bad as most think I actually like their equipment and backend/haul stuff light years better then what Charter uses where I am PassPort straight from the late 1990's - Early 2000's when digital cable because the normal thing.


[RANT Mode]Also screw the FCC for not making providing CableCards a law! $1 for the card and $1 for the secure connection why I don't care if they know what I watch or do just rent it to me for the $1[/RANT MODE]
J

hititnquitit said:
With no gear to test with you may as well start somewhere. If your return window is closing for the mb thats as good a place to start as any. Its better than waiting a month for a gigabyte rma return.
Definitely not what i would normally suggest as a 1st troubleshooting step but you do what you can with what youve got.
Click to expand...

Yes! It's got to be worth a try. So far this evening, an hour plus with no reboot, so it's wildly inconsistent. Will report back once I have the new one.
J

Format _C: said:
Sounds like my issue mine only crashes before the Windows 10 login only if XMP is enabled though!

I've seen it happen both with XMP enable and disabled, I believe. Will test that in more depth once I have the replacement.

Okay, after several days of dicking around I have a new motherboard. Tried to replace the GB with an Asrock (same brand I had previously which was flawless and worked perfectly as a Hackintosh), however, the SATA ports are at 90 degrees fo the plane of the motherboard (they point sideways instead of straight up) which is no good as my Fractal Core 500 case has zero space between the edge of the motherboard and the PSU.

So, I ended up getting a replacement B550i from Amazon this time, and have rebuilt the machine. Booted first time, but is running F10 BIOS, one update previous to what I had ended up on. BIOS settings are stock, apart from drive boot order. Going to see how that goes for a few days. If I get a week without hard boots, I will enable XMP and see how that goes - will up RAM the voltage first, as Format _C: suggested, if I have issues again.

Hoping and praying for stability!
J

48 hours with no reboots so far.
<EDIT> One week and still not a single reboot</EDIT>

Going to leave well alone and resist the urge to upgrade from F10 to the F13a bios update which came out last week...
<EDIT> Still resisting... will wait another week or two </EDIT>

If anyone has upgraded to that version, please post your results. Thanks!
Last edited: Feb 8, 2021
J

After three weeks (and experiencing some weird USB quirks, allegedly fixed in F12), I decided to take the plunge and upgrade to F13 bios. It's been tweaked and revised a couple of times and is currently F13C. It's five months newer than the F10 BIOS my board has currently.

Now that I know that the electrical makeup of the board is good (3 weeks without a single reboot), I will be interested to see whether I have any issues.

PS... if there's a MOD who is able to move this to a mobo forum, maybe that would be more appropriate now that I know it's not the PSU?
<EDIT>Thank you!!</EDIT>
Last edited: Sunday at 5:35 PM

glad you finally got it working. we're you able to get xmp back on?
J

pendragon1 - Haven't got back to that part yet, will give it another week, make sure I have no reboots and then re-enable XMP and report back.

<EDIT> 3 days and no reboots so far... I'm thinking it's going to be fine. Should be enabling XMP soon.</EDIT>
Last edited: Tuesday at 8:05 PM
You must log in or register to reply here.
Share:
Reddit Pinterest Tumblr WhatsApp Email Share Link
Top