Long story short, I'm wondering if my router is going bad, at least on the wireless side, or if it's something else.

The reason to believe it's something else:
Our cable box for the TV in our living room supports Netflix and Amazon Prime. We get really bad quality at times when going through the cable box when streaming. I haven't seen anything bad happen during regular live TV watching as of yet, other than the UI for the cable box being slow on a very very VERY rare occasion or freezing up. But powering it down and starting it back up fixes that issue.

My internet connection normally hits the 200+MBps range without issue. However lately I have been getting drops as low as 8Mbps and more consistent performance in the 30Mbps range per Speedtest.


I do not have any special QoS configs, just the standard port triggering for the Xbox's to play nice.

Log into your modem usually 192.168.0.100 I think and look for errors and look at your connection power raitings for both your up and down badge.

For router are you letting it pick the wireless channel? If so do a scan around you and pick the least used 5ghz and 2.4ghz channels.
M

Logs? Ping your gateway and look for packet drops.
S

Well, I certainly feel foolish. I should have started with the cables!

As far as I can tell now, it was not my router at all, but a bad coaxial cable going from the modem to the splitter. Odd, considering this is the newest cable I have. It's trash now, I guess.

I have no way to test the splitter, but I DID realize I had the old cable from the previous installation at my apartment still handy, because I'm a cable hoarder.
Swapped out the coax cable from the splitter to the modem - FULL SPEED!
Retested by swapping the bad one back in, confirmed it was slow even after a reboot of the modem
Swapped in the tested-good coax from the apartment, it checks out again.
Put the modem back to the router - still full speed

Wired Xbox One speed is still the same, no packet loss, but my phone gets the full 200+ now. I think this speed may be a limitation of the XB1 itself, or its internal speed testing capability. Wired or wireless I can rule out the router as a bottleneck.

At this point, the only way I'll know for sure I am all set is random testing during the day to make sure this is still what I'm seeing. But I'm confident that's all I needed.

As for the TV side, I suspect that the coax cable is seeing its age now. This cable going to the TV, if I recall correctly, is the original cable when we bought the house. So I guess I'm in the market for new coax cable that isn't going to give me this crap later. Any suggestions? Looking at a 50ft run off the top of my head, a 25-footer won't do. I'd cut and crimp it myself but I think that's a bigger investment than I need to make right now for one run.

I am starting to notice that one of my R7000's is going bad, but I've been using it as a wireless bridge. It will overheat and stop getting ip addresses on the bridged side of the network. It's been running for about 5 years though, so it's not like I haven't gotten my money out of it.
S

Ugh. Back to square one. I'm thinking it wasn't the cable, just a fluke.

Random tests on speeds all day were atrocious, barely hitting double digits at all on download. Upload has not been impacted whatsoever. So I put the cable I originally thought was bad, back on.

Tried swapping out the coax splitter for a new one. I did some digging on the one that the cable installer put in and...there's fairly mixed reviews on its quality. So I figured what the hell, they're 10 bucks tops unless I get something insane.The worst that can happen is it's not that either, right?

Swapped it out, "bad" cable and all, and now I am fluctuating between 6Mbps to the full 200+ on repeated tests. As of the completion of this writing I am still at the single digit Mbps, going directly from the modem to the PC.

At this point, it is somewhere between the line that Comcast installed, or my modem.

Pinging my gateway didn't get any results. But I did ping Yahoo's domain and wound up with 2 of 30 dropped pings. Not sure if that's related. 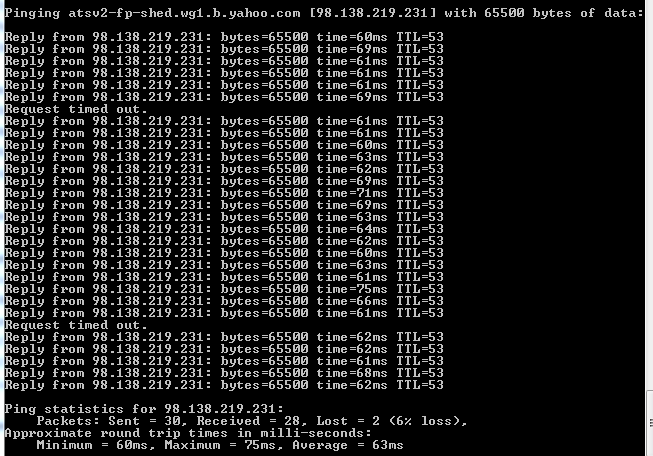 Vengance_01 said:
Log into your modem usually 192.168.0.100 I think and look for errors and look at your connection power raitings for both your up and down badge.

For router are you letting it pick the wireless channel? If so do a scan around you and pick the least used 5ghz and 2.4ghz channels.
Click to expand...

I did end up changing my 2.4GHz channel as the default channel it was on was saturated with other networks in the area. But other than that, I didn't need to change anything else.

There doesn't seem to be any kind of errors to refer to.
M

kirbyrj said:
I am starting to notice that one of my R7000's is going bad, but I've been using it as a wireless bridge. It will overheat and stop getting ip addresses on the bridged side of the network. It's been running for about 5 years though, so it's not like I haven't gotten my money out of it.
Click to expand...

I was thinking I was about to be in the same boat here, but at this point I think I can rule out the router.
S

So in an effort to get this looked at by someone who's actually paid to fix this crap, I got on Xfinity Chat. Managed to skip the usual crap (for a bit) by letting them know what all I already did.

My hopes got up and then were dashed when it tested out at 240Mbps (both on their internal speed tester and Ookla's) but then suddenly dropped. Retested again and barely touched 60Mbps.
M

So the tech swung by today, and after going over everything I did, he decided to check the outside lines since I ruled out everything up to the splitter.

The cable going from the pole to my house was pretty damaged. The insulation was torn up and the aluminum shielding was torn apart on the inside. If I had to guess, some high winds we had a couple weeks back was the culprit, making the line rub against something until it started damaging it.

The initial installation also had some connectors this tech wasn't a fan of on the coax lines, so he clipped them and crimped new ones on all of them.

I've been torture testing the line on and off all day today and so far I am still at a constant full blast speed every time. So far it's looking like a bad line from the pole to the house.


I honestly don't think the temps will ever be an issue. The modem is in my basement where it is cooler than anywhere else in the whole house. This time of year, I'd be amazed if it ever goes above 50F even with the heat on full blast, as it's a bare basement and I just recently discovered a draft in one of the windows.
A

I had issues with my R7000 before (random restarts, sketchy WiFi). Downgraded the firmware and it's rock solid again.
R

Yeah, I've had random drops on the wifi the past few months. Seems worse since the 1.09.88_10.2.88 firmware. I've seen others have problems with it. Sometimes it takes out just the 5ghz wifi, other times both the 2.4 and 5ghz. Only a power cycle fixes it. I'll probably downgrade firmware or jump to ddwrt variant and see how that goes.
You must log in or register to reply here.
Share:
Reddit Pinterest Tumblr WhatsApp Email Share Link
Top