My Office is an Ode to PC Gaming

First off sorry for the picture quality, had to use my phone since my old Canon seems to have died. Wasn't planning on taking any, but a friend wanted me to post my system in their Discord so thought I'd share while I was at it. Still proud of the setup. I had been waiting to share until I felt it was "perfect", but I'm still looking for ideas as to how to make it better so feel free to add your input.

Bought a house about 10 years ago and aside from the daughters being in and out during College / Deployments, I have lived alone. I work a lot of hours, so occasionally I need a project to maintain some sanity. This Office was one. When I was trying to figure out how I was going to organize & decorate it I started going through a bunch of old totes with all my PC & gaming crap. I decided then, instead of buying a bunch of stuff to decorate, I would just make a museum out of all the stuff I've accumulated over the years. I don't have the original copy of X-Wing on floppy disk that was my first PC game ever (on a 486), but I do have one of my first graphics cards: a 3DFX Voodoo 2. Anyway, I may try to get better pics if I can get my camera sorted, but for now here is the quick and dirty. 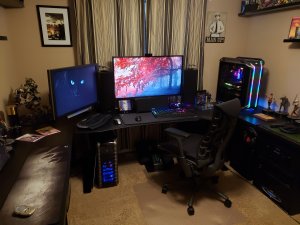 Main monitor is a dated 4k 40" Seiki; I'll get to the system running it in another shot. It is only 60htz with no HDR, so I've been wanting to upgrade for a couple years, but I don't like wide screen and nothing compelling has come out at this size. Side monitor is my older 30" Dell Ultrasharp run by a much older i7 960 system. I build all my systems, so you may notice a gen 1 Cosmos case on the floor and the new Cosmos C700p on the desk. I have a Cosmos 2 in the basement running my Flight / Racing Sim setup. Sound system is driven by a Marantz receiver with a 5.1 Axiom speaker system (Velodyne sub). Headphones are Sennheiser. My original Deus Ex is left of the center speaker, with Human Revolution on the right (with System Shock in front of it). You may notice the Titanfall Collector's Edition statue far left. I bought this mainly to support the Team that left Infinity Ward & Activision to start Respawn. On the floor is a Qubii eliptical because I spend WAAAAY too much time in a chair. Speaking of the chair: Herman Miller Embody, and worth every penny if you sit for long periods. 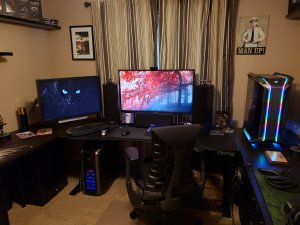 Picture on the left is a numbered limited edition placard from Stalker Clear Sky. Mr. Fife providing the comic relief on the right. 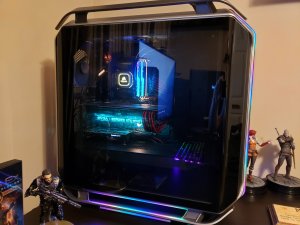 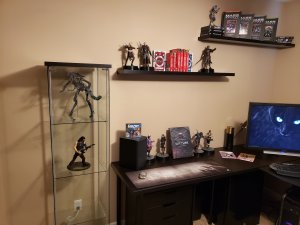 Obviously a huge Witcher & Mass Effect fan. I was never really into collectibles to be honest, mostly because I was broke off my arse for so long (divorce + custody battle). Now I work so much I have little life outside of work, so I end up spending money on this kind of stuff. The display case is a fairly new addition that is still a wip. 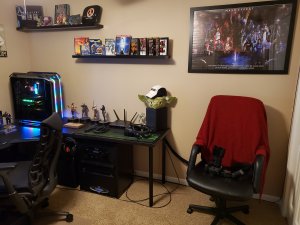 Top shelf houses the aforementioned Voodoo 2 card, X-Wing on CD and the Half-Life 2 Collector's Edition, lower shelf some of my favorites over the years. Hard to beat No One Lives Forever, and I had 1300 hrs in Battlefield 2 back in the day (found a good Clan). Lastly, had to get the Valve Index just so I could play HL again... and it was worth it.

There is a ton more in storage, but shelves full of old games starts to look boring after a while. Open to ideas and suggestions if you have any. I know wire management is an issue, and better pics.

Frraksurred said:
There is a ton more in storage, but shelves full of old games starts to look boring after a while. Open to ideas and suggestions if you have any.
Click to expand...

I have enough costly hobbies, lol. Might do set pieces for the display case though.

Upvote for NOLF. Way ahead of it's time in some ways.
Q

I hate you by the way.
C

I hate you by the way.
Click to expand...

LOL! Dude, we need to find time for some Destiny. Do you typically do PvE or PvP? I suck equally at both, but the Community still makes it fun.

Need to get you in on some Destiny too. Need to get both of you on my friends list.
Q

Frraksurred said:
LOL! Dude, we need to find time for some Destiny. Do you typically do PvE or PvP? I suck equally at both, but the Community still makes it fun.
Click to expand...

I do it all. I haven't been able to get into a Raid yet and I've done Trials twice and that was enough for me. Iron Banner is probably my overall best PVP situation for whatever reason.

Need to get you in on some Destiny too. Need to get both of you on my friends list.
Click to expand...

Criccio has saved me more times than I can count.
A

Nice job, looks amazing! Where did you get the desk?

Andym22 said:
Nice job, looks amazing! Where did you get the desk?
Click to expand...

Center desk is a Fully Jarvis 72" programable standing desk (roughly $800 with options I choose, but available down to $500). The side desks are Ikea basic tables ($60 a piece). Had them all for about 3-4 years, happy over all. The Ikeas won't take much abuse, but if you treat them accordingly they work just fine.
You must log in or register to reply here.
Share:
Reddit Pinterest Tumblr WhatsApp Email Share Link
Top