Monero Crypto Not as Anonymous as You Might Think

If you have been mining Monero on your Threadripper, then using that cryptocurrency for buying hookers and blow, you might want to be aware those some of those older Monero transactions are not as private as you might think. Thanks cageymaru.


All of which means Monero may continue to leak small amounts of information that could be used to point to likely spenders—even if not providing a smoking gun. Even so, the researchers warn that small information leaks can build up over time, and can be combined with other data sources to provide that more concrete evidence. Perhaps more disturbingly for Monero users who spent coins before its privacy improvements, indelible fingerprints could lead to their front door. And that points to a more fundamental problem for cryptocurrencies offering privacy: Any security flaw discovered in the future might apply retroactively, allowing observers to dig up old skeletons buried in the currency's blockchain.
K

mining for hookers and blow..

NOW that is an acceptable use

Better than the IRS using it for their hookers and blow.
I

I had no idea hookers were accepting crypto . On a more serious note. Did you guys receive emails from any other exchanges about contacting a lawyer other than CoinBase ?
R

Imhotep said:
I had no idea hookers were accepting crypto?
Click to expand...

You'd be surprised what you could buy with crypto.
O

how efficient is threadripper for ROI?
a. motherboard/ram/threadripper/ nice gpu... basically a whole tower setup (lets say $2k)
b. mining monero > how long to pay off ?

my guess is a year?
T

oROEchimaru said:
how efficient is threadripper for ROI?
a. motherboard/ram/threadripper/ nice gpu... basically a whole tower setup (lets say $2k)
b. mining monero > how long to pay off ?

oROEchimaru said:
how efficient is threadripper for ROI?
a. motherboard/ram/threadripper/ nice gpu... basically a whole tower setup (lets say $2k)
b. mining monero > how long to pay off ?
my guess is a year?
Click to expand...

Depends on setup, at current profits more than a year though.
A

Nothing on modern technology anonymous, but idiots will keep chasing the chance to be anonymous anyway.
O

That is in funny money though (JK)!

Well I always like the thought of making a good gaming rig and paying it off over time by mining... but the tech changes so fast (cpu not being profitable) so I wasnt sure if it was worth it. Maybe wait for thread ripper v2

RogueTadhg said:
Better than the IRS using it for their hookers and blow.
Click to expand...

That was the NSA, on more than one occasion, but the IRS might feel left out. . .
N

The decentralized blockchains are public records, digital, which once could extract information from. Like Bitcoin once a government ties a wallet address to a person, every transaction after that can be 100% tract in where it goes. Also how much is in it. Something that many governments probably dream of, having 100% tractability of everyone in their system to the Natasha amounts 10^-8 of a Bitcoin and net worth from the beginning of the Blockchain without any errors or human intervention messing with it. Like this coin was made for big governments in mind to begin with from the start - it may have been as far as we know.

Creating wallets is easy especially paper wallets, you could have thousands and only use it once - send to one then to another and then use it to buy what you are going to buy and throw away the wallet (don't use it again). It has no name on it. If you want privacy then the privacy coins with some smart wallet usage will probably go a long way until other holes are found and history is exposed. Once you start using multiple wallets no one knows if that was different individuals or the same individual and one would be tracing a whole bunch of dead wallets or and endless trail of dead wallets. 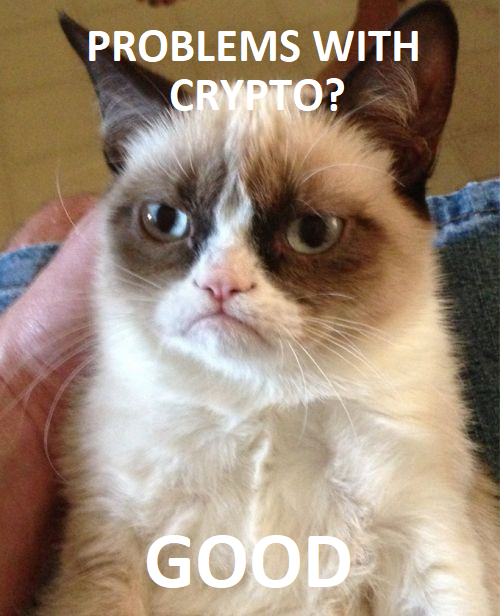 oROEchimaru said:
That is in funny money though (JK)!
Click to expand...

Lol, you're not wrong these days, sadly. It wouldn't be so bad if we weren't also traditionally charged higher prices, even accounting for the exchange rate, in the first place!
T

I normally pay hookers with blow, but I'm old school
U

Why don't people launder their money the old fashion way? With mattress stores.
A

RogueTadhg said:
Better than the IRS using it for their hookers and blow.
Click to expand...

IRS too? I thought that was just the Secret Service?
T

nice to see kyle getting in on the crypto mining hobby.
O

Todd Walter said:
Lol, you're not wrong these days, sadly. It wouldn't be so bad if we weren't also traditionally charged higher prices, even accounting for the exchange rate, in the first place!
Click to expand...

The mishandling of currency transitions is nuts in Canada... however us Americans rarely have any offerings at local shops (only at banks or exchanges).
a. bought eggs, they did a "convienence fee in US for like $12 (2 eggs and toast)... Canadian it was $4... (literally 8$ markup)
b. bought booze at a store... the lady did the currency difference in the wrong direction so instead of a 5-10% surcharge we got a 5-10% discount but since we know the owners we let the lady know lol
c. go to other stores and its a legit government register that does the currency exchange for you and possibly a small transparent fee
You must log in or register to reply here.
Share:
Reddit Pinterest Tumblr WhatsApp Email Share Link
Top