Been out of the home theater game for a bit and with the new Apple 4k TV on it's way, it's time to upgrade to a 4k setup.

we already have the TV that's 4k ready. The current AMP is not.

We have 6" to work with height wise and need a 5.1 setup. Came across a few Marantz receivers that fit the height requirement.

Never herd of Marantz before. Suggestions?
B

Marantz makes some very nice high end AV equipment. Surprised you haven't heard of them as they've been around since the 1950s. Generally any of their products are a good choice, albeit not cheap.

Marantz is a very solid choice, I don't know that they make a bad product ($$$ will get you that).
O

Marantz is long time company. However more recently, they have changed. They went with a pretty bold look on their receivers which don't really match any other company. They were also bought by the same company that owns Denon. So most of the Marantz's are based on or share many components with Denon receivers. Which is fine, I'm a Denon man myself. It's good stuff.
O

westrock2000 said:
Marantz is long time company. However more recently, they have changed. They went with a pretty bold look on their receivers which don't really match any other company. They were also bought by the same company that owns Denon. So most of the Marantz's are based on or share many components with Denon receivers. Which is fine, I'm a Denon man myself. It's good stuff.
Click to expand...

Orddie said:
Thanks! any thoughts on the NR1508?
Click to expand...

Looks pretty solid. Has most of the newest features and looks to exclude more of the extra stuff, either for space or price point. Can't fit a bunch of connections into a small form factor.

I just recently got a new Denon receiver and I see a lot of shared components. The HEOS stuff (though I have not used it, I have used the Airplay though). The Audyssey Muti-EQ makes initial setup a breeze. I have mine set to auto-ECO mode and you can hear it switch between modes when turning the volume up, it's like the sound of a relay, like when you first turn on the reciever. The remote is a simplified version of the one I have....same look and buttons, just less. I don't see the auto-upconversion to turn ALL output to 4K HDMI, but it doesn't have much in the way of analogue inputs so not a big deal for you.

I wouldn't worry about the wattage. Especially if you have a nice powered sub, that's where the power gets sucked up. Throw a 100-200W power sub in with that and you will be fine. Take out the bass and 50W can get more than uncomfortably loud.

Heck I remember 20 years ago when Harmon Kardon sold 40 or 50W/channel recievers and I never had an issue with them.
C

Marantz is an old Japanese company that is now owned by D&M holdings which includes Denon as mentioned by westrock2000. Most of their receivers are identical to their Denon counterparts. Marantz markets itself having high quality audio. They actually still make some of their reference audio products in Japan. Though now all of their consumer level equipment, receivers, speakers, etc, is now made in China. I own a 5 year old SR6004 that's serviced me well and I'm sure the NR1508 will work fine as long as you listen at relatively normal volumes.
V

All the consolidation, there's only like 4 companies left that make receivers, even though there's 30 brands.
J

Just to touch a little more on Marantz and its relation to Denon. D&M Holdings consists of Denon, Marantz, and Boston Acoustics. D&M Holdings was bought by Sound United ( which consists of Polk, and Definitive Technology -- both speaker brands ) in March 2017. Sound United getting D&M also gives them a portfolio which includes receivers and processors. Marantz caters more to the analog crowd and the inclusion of amplifier outputs extend lower into the lineup than Denon. They also make dedicated stereo receivers and low-profile units, like the previously-mentioned NR1508.
M

Scored this Marantz 2220B Receiver (works, but contacts need cleaning) 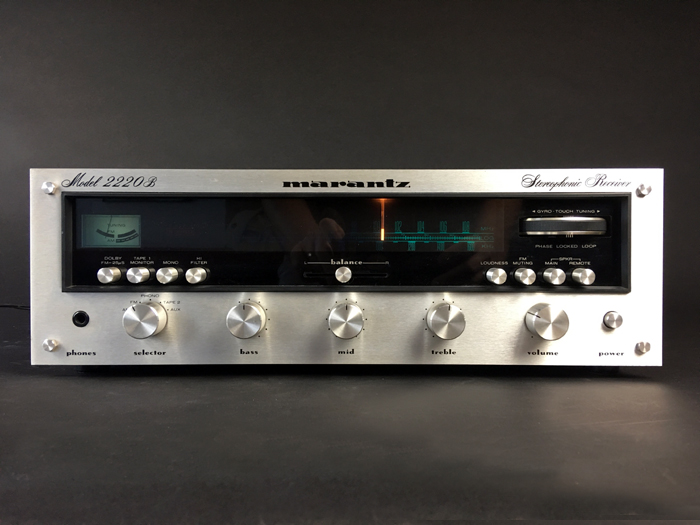 Nice one! I snagged a 2238B for next to nothing (seriously it was $15 or $20) at goodwill a few years back, after a good cleaning and a few replacement capacitors it looks and sounds like new. You might have already seen this, but you can replace the old fuse bulbs with LED equivalents - they're brighter and *hopefully* won't need to be replaced for decades.
C

I had once of those in college... such a sweet stereo amp. Too bad I blew it.