LG teamed up with Call of Duty 4: Black Ops publisher Activision for its “Elite Reaction Test,” an online mini-game of sorts for determining who the best gamers are: PC, Xbox, or PS4 players. The test is simple; players simply hit the targets that glow green. Strangely, PC gamers ended up in last place despite their peripheral of choice.

Reddit just exploded in a cloud of indignation and cheeto dust.

PC gamers are distracted by all the RGB.
Z

The test is on PC using a mouse to control regardless of which system a person chooses as what they game on. So, it's a PC-reflex test no matter what.

It only counts clicking on the green ones as being fully accurate.


When running the PC test, I got 82% accuracy the first time, 78% accuracy on a subsequent try.

It feels easier to me when doing the Xbox test. I wonder if they tweaked the difficulty (how fast new targets appear, how long they stay green, how spread out the targets appear) as some sponsored promotion for Microsoft.

It doesn't seem to really count if you hit the target - going by my peripheral vision I noticed I could land off the target and it would still count at a hit.
B

I tried it twice and didn't do so hot on PC, but then again I'm not an expert twitch gamer. Also using $10 bargain Logitech wireless mouse. It turns into a shitshow near the end with so many popping up at once all over the place, I kind of gave up at the end.

If the exact same person gets wildly different results on xbone vs ps4 there could be a little wireless latency or something going on.

Even the article states it's bunk. "While this study is clearly flawed, the results may still be interesting to some gamers"

Nope, because otherwise, the numbers would be closer to 100%. And a user claimed reddit is exploding?

Not about aim assist at all. Otherwise, why is it only 78%? Nope, they are simply better because they probably play more and practice more. A keyboard and mouse guarantee's nothing.
H

ManofGod said:
Nope, because otherwise, the numbers would be closer to 100%. And a user claimed reddit is exploding?
Click to expand...

What? By no means does aim assist equate to 100% accuracy. Or close to it.

PC gamers have a more powerful tool at hand so their numbers should be way higher if the playing population was actually "better." I'd say that's apples and oranges anyway. PC game players are very top and bottom heavy. There are the people that have been playing twitchy games with mice for 25+ years and there are a boatload of casual players that started Fortnite last week.

On the console side, I've long found Xbox players to be better than Playstation players when it comes to FPS games. I play with friends on both consoles and it can be night and day different with the same game. Destiny (both 1 and 2) and Modern Warfare being prime examples. While there are more people on PSN, that even goes back to the 360 era where that wasn't the case. It's anecdotal of course, but it's waaaaay different in my experience.
P

Well the only console to make it through Doom Ultra Nightmare was the PS4. I can play on Nightmare and do OK myself, although I am nothing like I was when I played Q3 all the time. Snap shots baby.
S

I did this test as few times on PC and my best was 98% accuracy hit 36 targets missed 1 for a top 0%. It's too bad I'm really not that good at COD and or Blackout lol. To be good at that game you need to play a lot and I loose my interest to quickly.

If I was to guess, I'd say 1/8 or more of the 'pc' users taking this test are using a laptop trackpad which would be abysmal so that would automatically bring the scores down as an aggregate.
J

Any mention of how AUTO-AIM improves those numbers?
D

The solution here would be to plug in the gamepad to PC and rerun the tests and put Xbox players on PC to see if it's consistent. Otherwise aimbot.

Well, what LG doesn't know could fill a warehouse.
1

All you have to do is compare Overwatch stats on characters across platforms and you can see a more dominant accuracy on PC compared to consoles. The pro Lucio that used to play on console clearly stated, as he was dared to not be as good, that the mouse actually made it easier for him targeting while doing wall rides.

Interesting "study"; I see no incentive to do good, but I see plenty to do badly (for the "opposite" team).
S

I think the unbiased way to test this is to gather a group of PC players with a (measurably) standardized PC, and a similar group of XBox players with identical XBox systems. Then while the PC players have coffee you take the XBox players out back and beat them with hoses while someone with a pocket protector publishes results that vindicate the PC Master Race.
A

find it hard to believe, the only thing worse than a gamepad for a shooter is laptop touchpad, which would help explain this.
my first try 84 and 2nd 89
edit : couple more tries, 97% accuracy, console plebs who wanna flex... 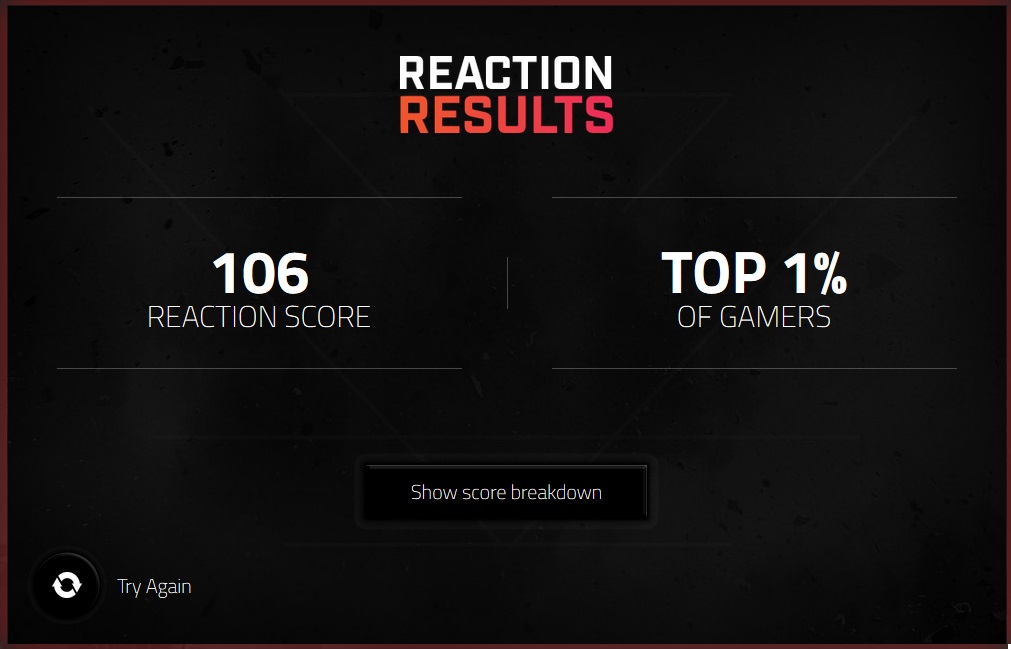 I am old AND slow, and I feel bad now. Thanks.

I actually did better the first time I tried it. I am slow though.
W

So the little lines on the background image are in no way shape or form similar to the linear and angular movements a persons thumb makes when using an Xbox controller.

The image itself actually helps a person track to a target using a controller, half the brain power is done for them already with the background, they just follow the lines. The reverse happens with a mouse, they fall into the lines get confused and take longer, unless you are really experienced with mouse or controller and ignore everything but the target.

Either way, the alignment of the targets favors an average person using a controller instead of a mouse. Flawed study is totally flawed.

If they want to really test this how about making COD cross platform multiplayer with no aim assist and no segregation of players ? I fucking dare ya.
G

Wiffle said:
Either way, the alignment of the targets favors an average person using a controller instead of a mouse. Flawed study is totally flawed.
Click to expand...

If you play a flat level with a controller you can literally just move your thumb left and right and have 100% horizontal accuracy with strafing, there is no movement arcing with the wrist like with a mouse. I have used this method on TF2 i can stand on a flat spot with Heavy weapons and take everyone out no problem, it's comical. However the moment you need to move diagonally or up/down to a height level of any gradient your screwed with a controller vs a mouse.
F

You know it just tricks you. You just click what ever when it gets into fast mode and you get a better score. Need to load up bf4 and see if I still got it.

I remember the term being called "sticky aim" because console players didn't consider it an assist because you guide your aim then it "sticks" to your intended target. Here's an image that perfectly captures what console/sticky aim is: 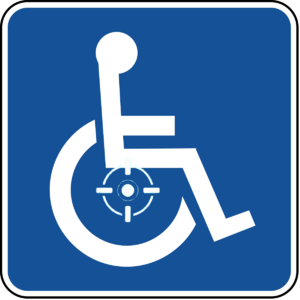 I wonder if this has anything to do with those of us on PC skewing a little older?

It's no secret that reaction time fades as you get a little older.

That, and you have less time to spend practicing. You know, having a job and all that.

Burticus said:
Even the article states it's bunk.
Click to expand...

that's because all those who have played that test were, unknown to them, secretly programmed and things will begin to happen to them on the next full moon

I tried it three times, but got pretty much the same result every time. 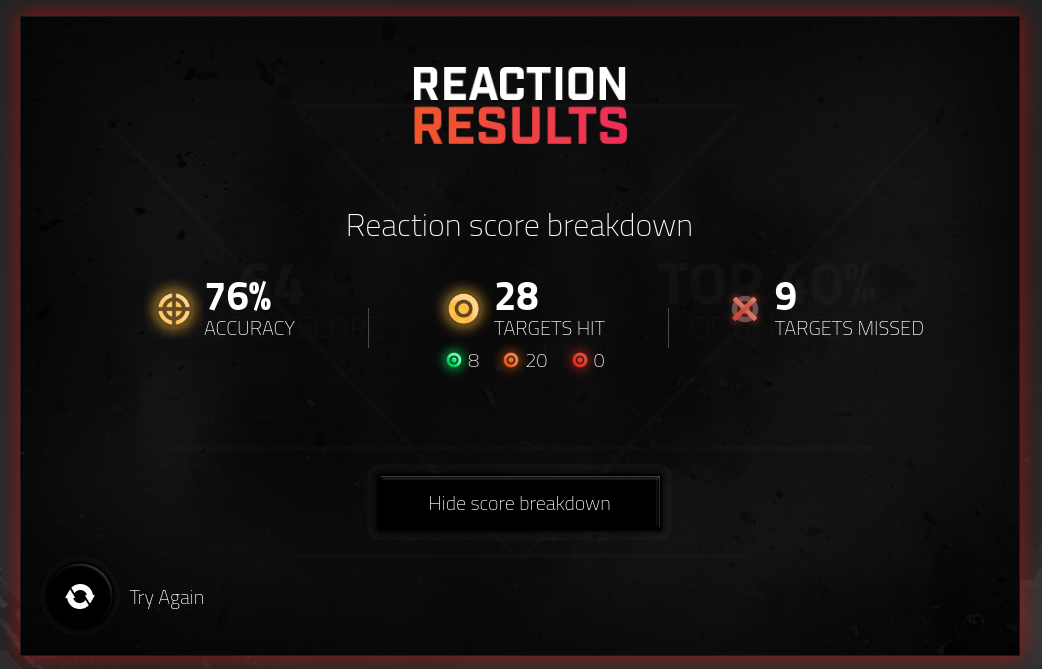 The fact that my my 39 year old reaction time, coupled with currently recovering from testing positive for Influenza A, tested better than the average makes this highly suspect to me

I think this just means the only PC gamers that play call of duty are the noobs. The good PC gamers play other games.

think that is within margin of error? platform of choice is hardly relevant, it comes down to the individual! edit: scored 76% sure i could improve it i would in no way be able to recreate that on that atrocious ps4 controller i got, it is an inferior controller in every way. im 31 old btw, wich count also. and just switching to higher dpi settings for me made better score also

alamox u must be prety good at FPS games i bet, crazy score!

i play with gamepad (easier on the wrists), and when it gets to some shooting mini-game (Evil Within 2, Just Cause etc) m+kb comes into play (for insta win)
D

Reaction test, so really "who is best at playing boring console games with tons of quick time events."

QTEs are the lowest of the low.

If u make a reaction test with tracer elements, it comes down to who is best at it with the best equipment available! It would be seriously biased or idiotic to think otherwise. Adaptation to periphials counts also i guess. For me i would instatly say this test is more like when nvidia trying to advertise 1060ti as a 60 fps rey tracing card

Yea this is a shit test. I got bored halfway through and stopped making any effort and got 78%
S

consoles have aim assist. ALL games have it. don't feed this SH$%

You guys are not seeing the positive side, here. Now we can use this "study" to argue for cross platform multiplayer since controller players are so much better than us PC gamers.
You must log in or register to reply here.
Share:
Reddit Pinterest Tumblr WhatsApp Email Share Link
Top