Is this GPU Artifacting

Pretty sure it is but it's been a very long time since I've had that as a problem (overdoing an OC on a Radeon probably) but I've had this come up on windows desktop a couple of times and wondering what the cause is. Basically get black squares all over the screen. 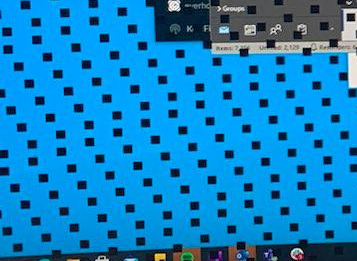 Sorry for potato like phone pic. It refreshes away pretty quick and haven't got a screen shot. Got a relatively clean install, can't reliably reproduce. Card is just on standard power profile and CPU just has normal increase in power allocation etc for dynamic overclock.

Not had any problems with card since new except for a bit of coil whine on some games, just thought I'd check.

do a screen cap, see if theyre in it. then test/replace: cable, psu, gpu

could also try turning down the mem speed to see if they go away.
S

pendragon1 said:
do a screen cap, see if theyre in it. then test/replace: cable, psu, gpu
Click to expand...

Good advice, definitely rule everything else out first. Fortunately it's EVGA so the RMA should be painless if it comes to that.

GoodBoy said:
Looks like a VRAM issue to me.

My first thought too but I try to never jump to conclusion without proofing. Vram speed reduction is where I'd start see if it eliminates the issue. Very easy test as well.
You must log in or register to reply here.
Share:
Reddit Pinterest Tumblr WhatsApp Email Share Link
Top