Intel cuts prices by up to 74% on Xeons

Good time to hold off on your purchases and hang on a bit until the drops find their way to your etailer. 2nd hand market will probably drop bunches too. 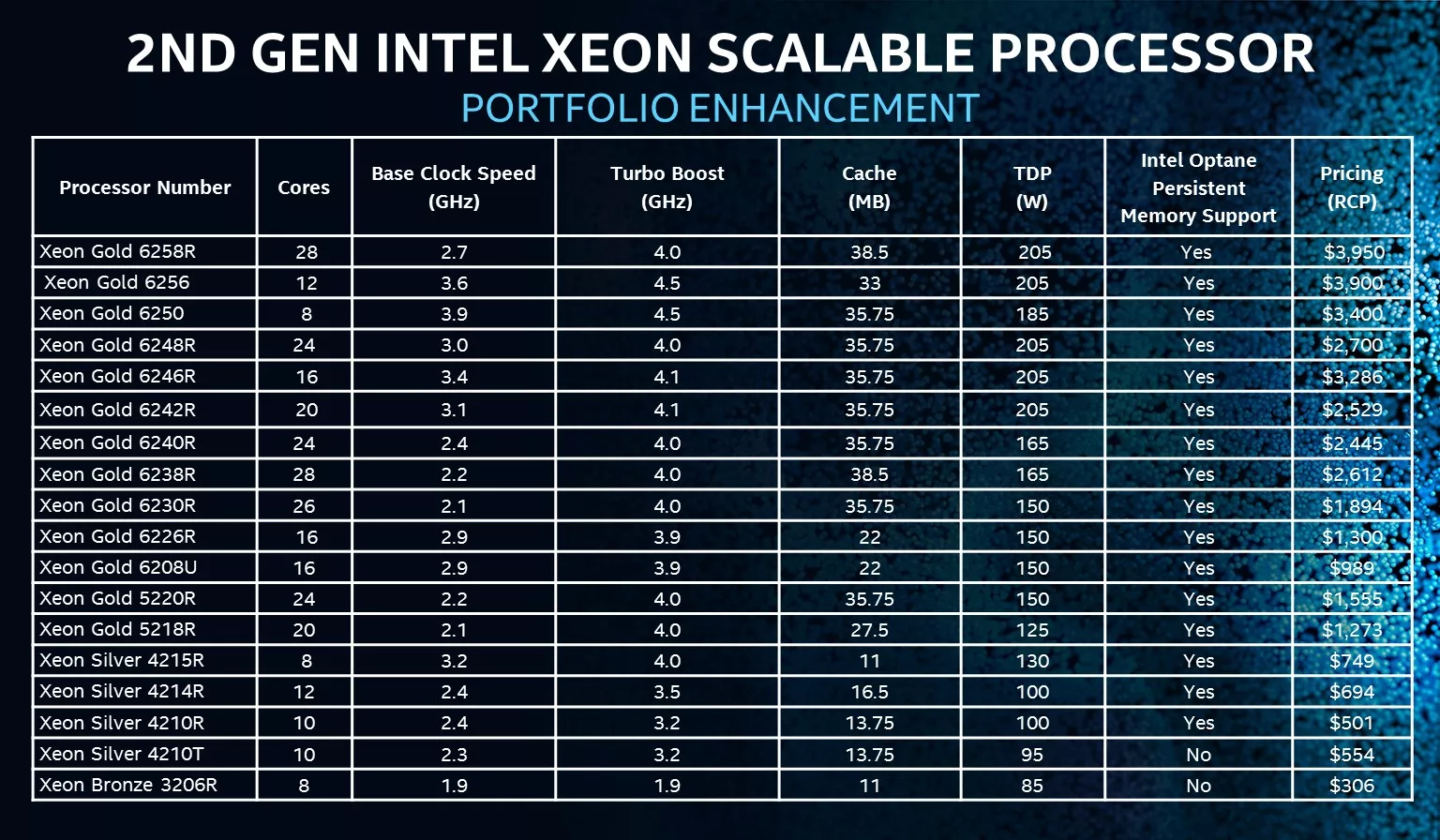 Why would I want a new XEON when AMD's offerings wipe the floor with Intel's offerings?
C

Some people want Intel for any reason. I'm not here to argue that. Those who want Intel can save a boatload of money by waiting a bit.
R

Those who want intel can still thank AMD for this. Do you think intel would be giving us more cores and cheaper prices if AMD released bulldozer 2.0 instead of ryzen? They are feeling the heat and being forced to actually be competitive again. About time Intel's price gouging is being put in check.

My company is still marching towards AMD. Intel has screwed the pooch on availability and pricing for too long now. Now they have effing shortages on NICs. We're moving to broadcom on NICs.
S

i just like how they pulled a move out of AMD's RTG marketing book.. took the same processors, changed the names and slashed the prices so that they don't have to honor the lower prices in their contracts with companies that have been waiting months for their orders to be filled. way to go intel, trying to save face where ever you can even though you know you still can't fulfill these orders anyways.

Competition is a beautiful thing.
D

OFaceSIG said:
My company is still marching towards AMD. Intel has screwed the pooch on availability and pricing for too long now. Now they have effing shortages on NICs. We're moving to broadcom on NICs.
Click to expand...

Really? Never had a single problem with them.

Sounds to me like the are right up the millennials' alley though.
D

cyclone3d said:
Really? Never had a single problem with them.

I've had countless problems with them over the years. I've even had problems with them in the very workplace OFaceSIG is referring to. I don't want to get overly specific, but I've had issues with Broadcom NICs negotiating with Cisco switches. I've had trouble doing PXE boots to them and issues with SAN arrays and FCoE etc. You can normally work around the issues with those controllers but there are better options out there. There are probably worse options too, but Intel NICs as an example are far better than Broadcom's.
Last edited: Feb 25, 2020
T

cyclone3d said:
Why would I want a new XEON when AMD's offerings wipe the floor with Intel's offerings?
Click to expand...

Volume of offerings. Not saying Epyc hasn't made some inroads, but it's still slow going from availability to end server product right now.
S

From the looks of things, these will have less addressable total memory than the platinums you're comparing them to. 384gb vs 4tb
T

Syndicated_Death said:
From the looks of things, these will have less addressable total memory than the platinums you're comparing them to. 384gb vs 4tb
Click to expand...

I looked at the 3 top models. It looks like they support 1tb.

thecold said:
I looked at the 3 top models. It looks like they support 1tb.

*obviously support can and does change depending on the model and I'm not going through all of them*
Click to expand...

Syndicated_Death said:
This is what I dug up here...

Those were just the specs of the said tests/benchmarks for comparison. I didn't read anything about specifications other than the giant picture. Anyways I went through about 7 models and they all supported 1tb of ram (including some silvers). I could find all of them in ark except the bronze.

For HPC applications, Intel offers a heck of a lot more support than AMD does - VTune Amplifier is incredible compared to AMD's offerings for profiling and hunting down performance hotspots. The latest price "cuts" bring Intel back on price parity with AMD - a 7552 is a 48c/96t for $4190, which gets you a pair of 6230R's over in Intel land (52c/104t) with a little bit of change left over. The AMD offering is certainly the way to go for hyperscaling (it's almost twice as dense), but the Intel offering has more PCI-e (3.0, which a lot of peripherals are still on), higher FP throughput, and better development and profiling tools, which makes it more attractive for smaller installations where density is less of an issue. Looking at the situation right now, Xeons are also available in more diverse form factors than Epycs - Tier 1 vendors are still just beginning to flesh out their AMD lineups.

My guess is that these prices are what the hyperscalers have *actually* been paying for Skylake Xeons the whole time, not the ludicrous $10K+ list prices on Intel's site. It would explain why they haven't all jumped ship to AMD (at the scale at which Amazon and friends deploy servers, it becomes worth it to reengineer a substantial fraction of the hardware and software stack to halve hardware costs and power consumption!), and it would at least partially explain why we've been able to get $10K Platinums on eBay for $2K since almost launch day.

This also represents a return to normalcy for high-end CPU prices - during the era of Westmere and Sandy Bridge, a pair of almost-flagships would run you around $2K a piece. Pricing really started slipping during the Haswell and Broadwell era (the 18C Haswells and 22C Broadwells were such a poor value proposition that I've never seen them in the wild before), and took a dive down the deep end when Skylake SP launched. I don't really have data for Skylake, but I would bet that most large deployments were using the trimmed down Xeon Golds, and not the 24/26/28c large processors.
S

Thanks for the info. Do you think these prices will affect prices for the old Intel Xeon processors (not on the list) still available new from venders and also the used market prices of Xeons?
U

When is this happening?
K

SLP Firehawk said:
Thanks for the info. Do you think these prices will affect prices for the old Intel Xeon processors (not on the list) still available new from venders and also the used market prices of Xeons?
Click to expand...

I would imagine that in the used market, it will definitely affect pricing. In the new market, maybe slightly. You can still buy old Intel CPUs NIB from some vendors and even though performance wise they are the equivalent to a $150 part, they still run $380 or so. The fact that essentially the same processor has gone from "Platinum" to "Gold" shows that Intel is playing the marketing game in order to keep their existing customers who might have paid up to 74% more money happy.
O