I've been wanting to try the Innovation Cooling Graphite Thermal Pad and I finally got a chance. It works great. 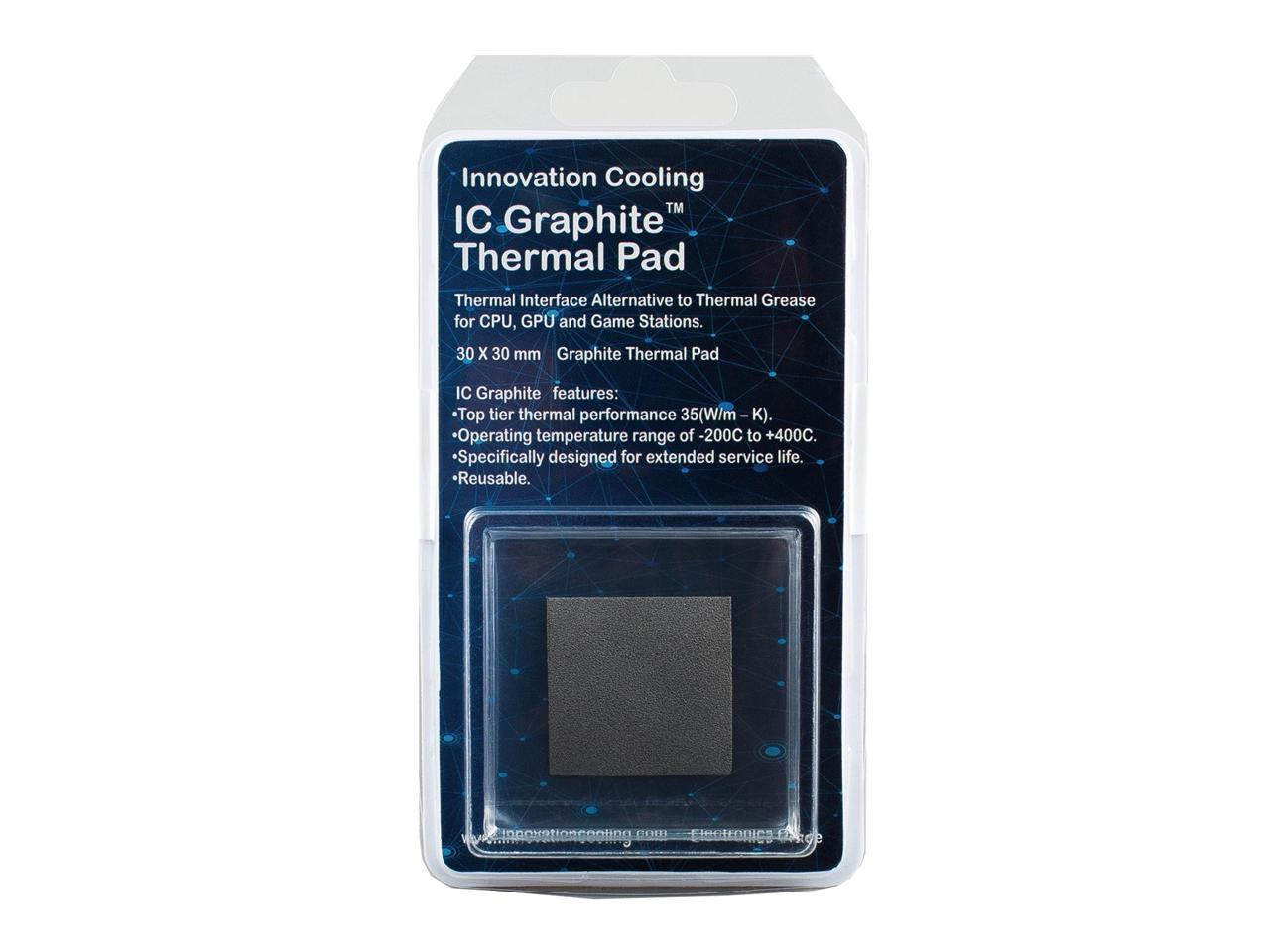 The machine I'm using in a Mini ITX board with a 4790K and GTX 1060 6GB. This is my spare machine and I recently had a power supply failure (my cat stepped on the surge protector) and I decided to rebuild it with a new motherboard/case/PSU.

Since the machine was dead, I was not able to test what the temps were before, however I can confirm that the thermal pad seems to work at least as good as paste from what I recall.

Basically I am getting 32C at idle on the Windows desktop, about 65C in gaming (Cyberpunk 2077), and with the Intel Burn Test it reached 80C even after a few minutes. So I would consider that pretty good.

Keep in mind, this is a small build with a low-profile fan heatsink, so I wasn't expecting amazing temps. However, it seems within the same range as paste and I like the other properties (no mess, reusable, long life).

I have one of those sitting here right now, but I haven't installed it yet. I'm planning on replacing my CPU cooler on Monday, so I'll give it a go and let you know.
L

I use to use a graphite pad on my 1950x, well long story short, it seemed to run close but always higher than something like MX-4. At the time I was having issues with the Enermax Threadripper 360 AIO so I was removing and putting back the cooler often so I got a graphite pad to avoid constantly cleaning off and reapply paste. In general I went back and forth between it and MX-4 and the pad was always had slightly higher temps (IIRC 1c - 4c at idle).
C

LurkerLito said:
I use to use a graphite pad on my 1950x, well long story short, it seemed to run close but always higher than something like MX-4. At the time I was having issues with the Enermax Threadripper 360 AIO so I was removing and putting back the cooler often so I got a graphite pad to avoid constantly cleaning off and reapply paste. In general I went back and forth between it and MX-4 and the pad was always had slightly higher temps (IIRC 1c - 4c at idle).
Click to expand...

Temp after idle is also a good metric (after running a stress test 10-30 minutes), as long as you're consistent in recording at a specific time.

Yeah, I watched all of Steve's videos after I purchased.

Seems the consensus is that the pads can run a few degrees hotter, but for most builds it's probably within reason.

If you are overclocking or have a high TDP CPU, then paste is probably still the best option.
F

These pads are not bad (I was testing them over on the group test over on notebookreview forums, still have a few packs left), as well as a couple packs of the original Panasonic Soft PGS+ pads I bought off Digikey, which are the same (you get a bit more for your money buying the panasonic pads directly, but you have to know exactly what product ID model to search for!). But I would absolutely NOT recommend them on any high core count CPU's on desktops or high wattage GPU's for any reason whatsoever. Not only does it perform worse than MX-4 on lower wattage chips, if you put them on a high TDP chip like a 10900k or a RTX 3090, it will quickly overwhelm the pad and your temps will just keep rising until you reach throttling point, if you put a heavy load on it.

These pads are okay for a mount and permanently forget (except for thermal VRAM pads! Those often have to be replaced every few years) on 45W or other low power CPU's and on reasonable GPU's like a 115W GTX 1060 or 1070 or some 2060 Max Q or similar chips.

tl;dr: don't use these if you are overclocking. If you want to not repaste too often, try a paste with high longevity, like Thermalright TFX
L

cybereality said:
This is my spare machine and I recently had a power supply failure (my cat stepped on the surge protector) and I decided to rebuild it with a new motherboard/case/PSU.
Click to expand...

These pads are great. I have one and have been very impressed with its performance. But that's not why I'm here.

I need to know how a cat stepping on a surge protector blew up a PSU? How large is this cat?....and what brand is the surge protector so I can make sure I don't have any of them.

Yeah, well I didn't think that was possible, but the machine was dead. It's a Belkin surge protector, that I've been using for years on multiple machines, it's very good quality.

Basically my cat stepped on the button to turn off the surge protector while the computer was on. Normally this shouldn't hurt anything, and it's happened before (blackouts, etc.) and it was never a problem.

However, this time the PC refused to turn on. I used the jumper on the motherboard, and was able to get power. Except the main hard drive had crashed, I could get into BIOS but after that it would go to a black and white flashing screen.

I tried checking all the power and SATA cables, everything was connected fine, but the hard drive was clearly damaged. After more testing, the machine would not turn on at all, even with the jumper trick.

That said, this motherboard is old (I got it 5 years ago) and I had problems before with the power switch (in an older case) so I think something was wrong with either the PSU or mobo, or both, and the cat stepping on the surge protector was the last straw.

Now that I rebuilt it, everything is working good, so at least the main components were not damaged (CPU, RAM, GPU). That SSD I was using was completely dead, though, and I could not access it even connecting to my main machine (with a USB dock).

Maybe I could have salvaged more, but the parts were not expensive, and also it was kind of a fun project to rebuild seeing as you can't buy good parts these days. At least I got a chance to build a computer again just for the hobby aspect.
You must log in or register to reply here.
Share:
Reddit Pinterest Tumblr WhatsApp Email Share Link
Top