I see the GTX1650 Super isn't going to be restocked; what then will be the equivalent?

That card would've been perfect for my needs; so am wondering what's going to be the card equivalent to it? 1660 etc, or nothing below the RTX 3x ?
D

A 980 Ti is almost the same performance, if you don't mind buying used.
P

Direkt said:
A 980 Ti is almost the same performance, if you don't mind buying used.
Click to expand...

pippenainteasy said:
isn’t that closer to a 1660 ti?
Click to expand...

You're right, I wasn't aware there was that significant of a difference between the 1650 and the 1660 until you mentioned it.
J

The OP is asking about the 1650 Super. So pretty much the bottom line is all comparable. The others are all slower (graph from Techspot). 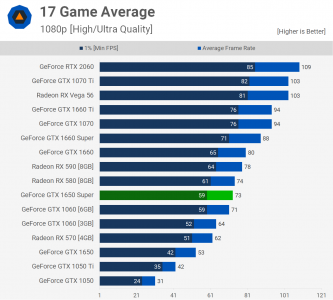 kirbyrj said:
The OP is asking about the 1650 Super. So pretty much the bottom line is all comparable. The others are all slower (graph from Techspot).
Click to expand...

Wow, I have to stop posting before having my morning coffee.
A

They have discontinued the 16 series to focus on the RTX 30 cards, it seems. They only kept making them as long as they did to relieve supply issues (usually they would have stopped shortly before or after the launch of the new cards), but now they're just going to pump out as many RTX 30 cards as they can.

As far as I know, a 1650 Super should perform about on par with a stock 980, while a 980 Ti is almost a match for the 1070. Though I guess it partly depends on which games you play and what they're optimized for.

What I can tell you for sure is that almost all the 16 series cards are outclassed by a 1070 (the 1660 Ti is the sole exception and basically just matches a 1070), and in my opinion are not a good deal at current prices for that reason. They were basically obsolete at launch (but were at least priced fairly), and are only "worth something" now because the used market is so crazy that people are willing to pay inflated prices for a 980 level of performance.

I would say the equivalent will hopefully be a desktop version of the 3050. The market desperately needs lower-end 30 series GPUs that aren't quite good enough for mining but are better than what gamers are settling for now.
You must log in or register to reply here.
Share:
Reddit Pinterest Tumblr WhatsApp Email Share Link
Top