i want to give antipesto93 from ocforums.com the credit for this, he is the one that gave me the idea!


my 8800gtx died a little over 3 months ago. went ahead and ordered a new video card because i figured the card is completely dead without having to pay to send it in and get it repaired because i didnt register it when i bought it initially(dumb, i know...). anyway, i am posting this message running off my 8800gtx!

i got the idea from another forum, because some guy in the UK bought a dead 8800gtx off of ebay that had red vertical lines through the screen...my card had the same symptoms...one day it locked up on me, rebooted, then locked up on me even quicker...rebooted, red lines all over the screen and windows wouldnt even boot. i tried the card in a friends computer with the same result...

supposedly this is similar to a trick used to fix dead xbox 360s. some sort of electrical connection gets frail and it eventually fails because of some tiny micro-fractures in solder joints or something....anyway heating the components up helps melt the solder and form new joints.

im now torn as to whether i should sell this card for cheap to someone or keep it as a backup... 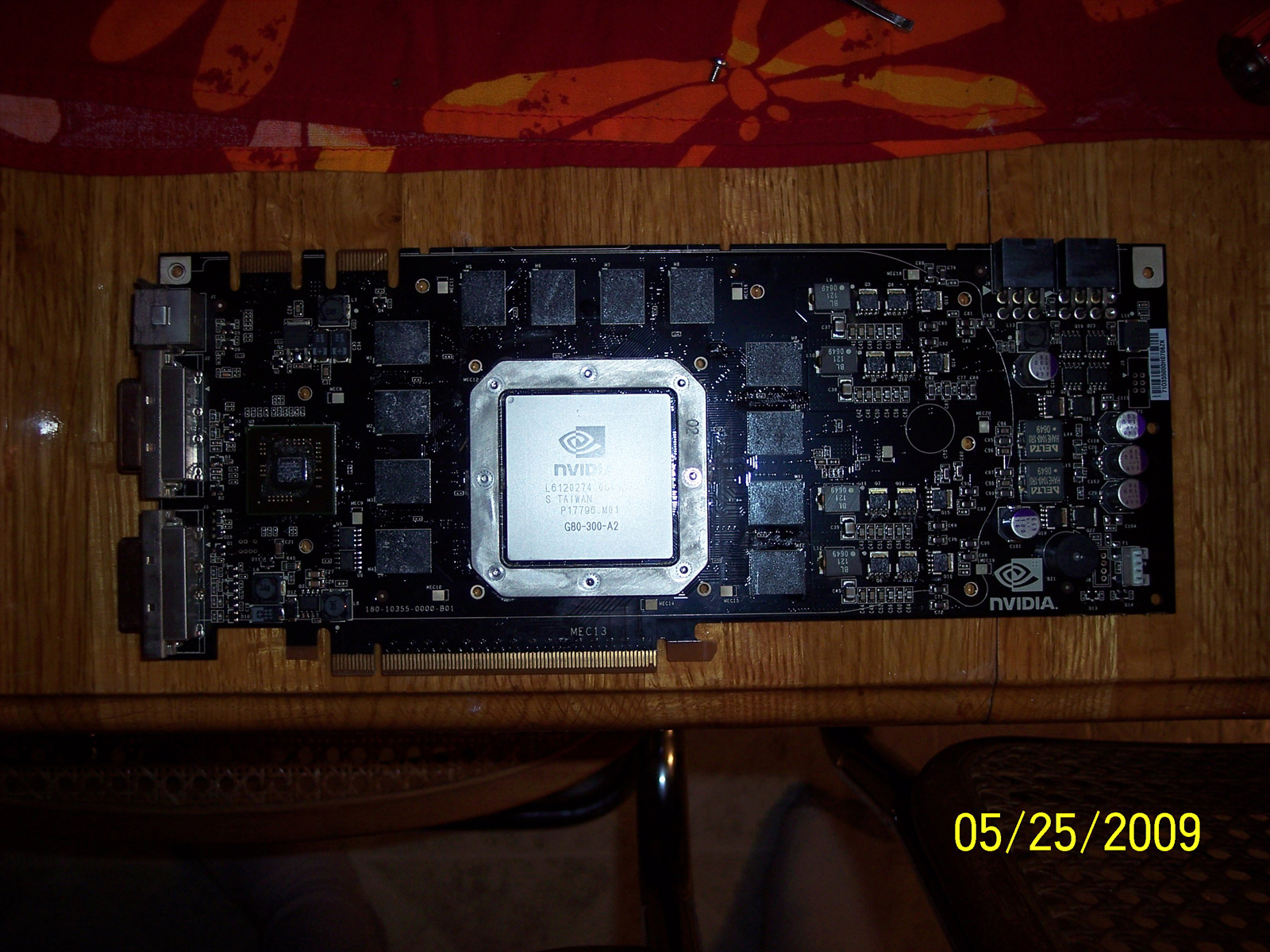 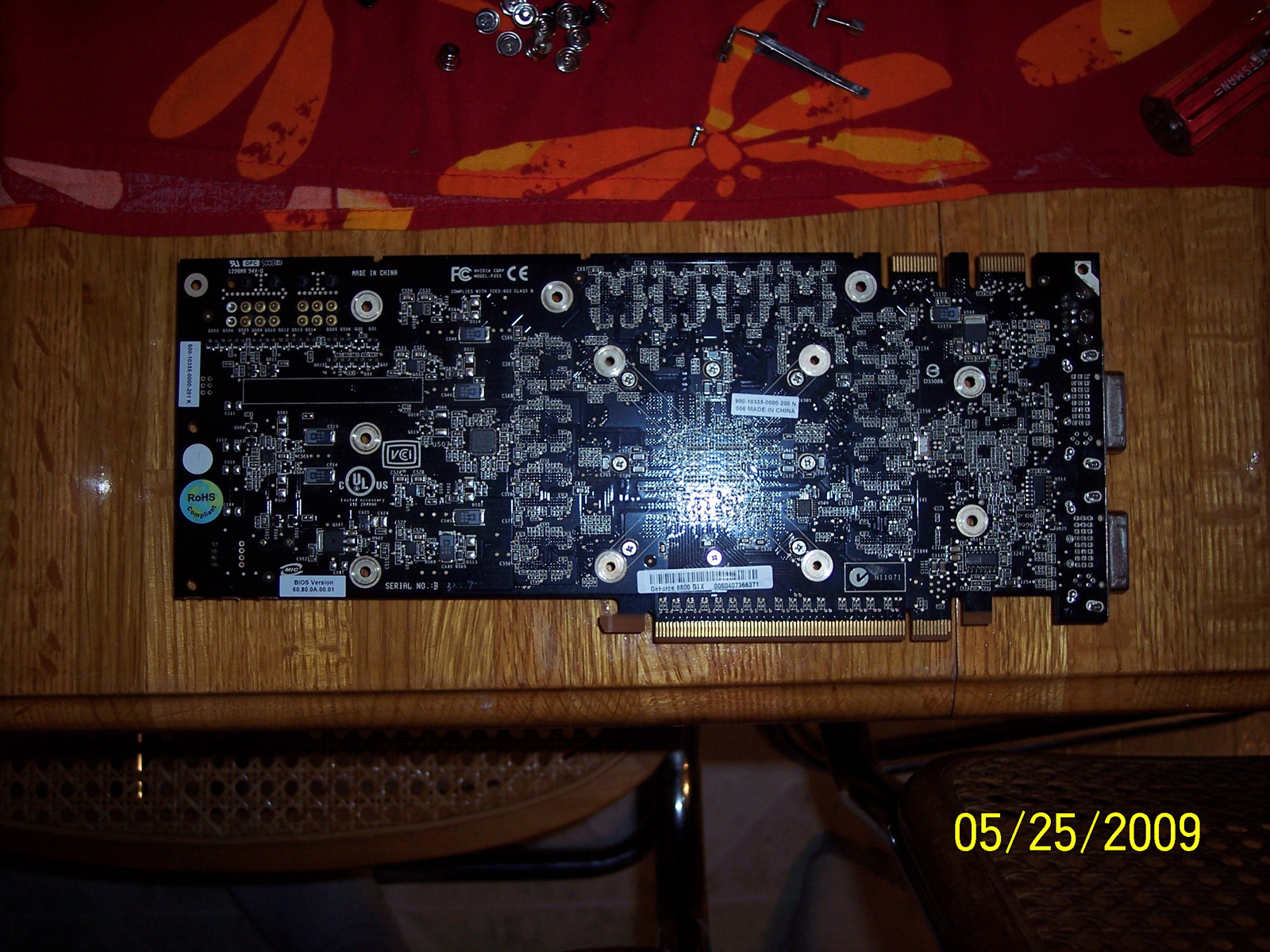 side shot propped up on foil 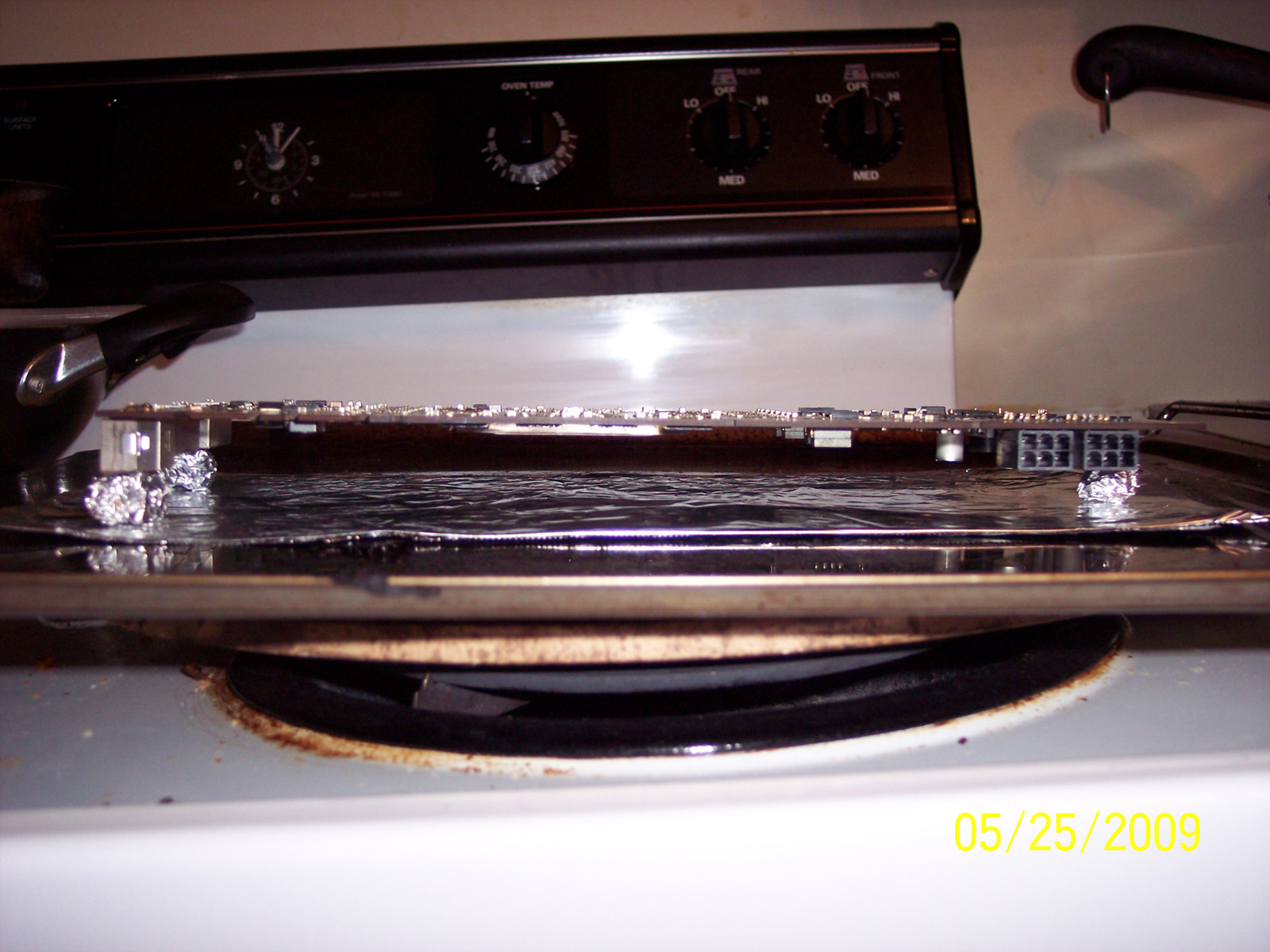 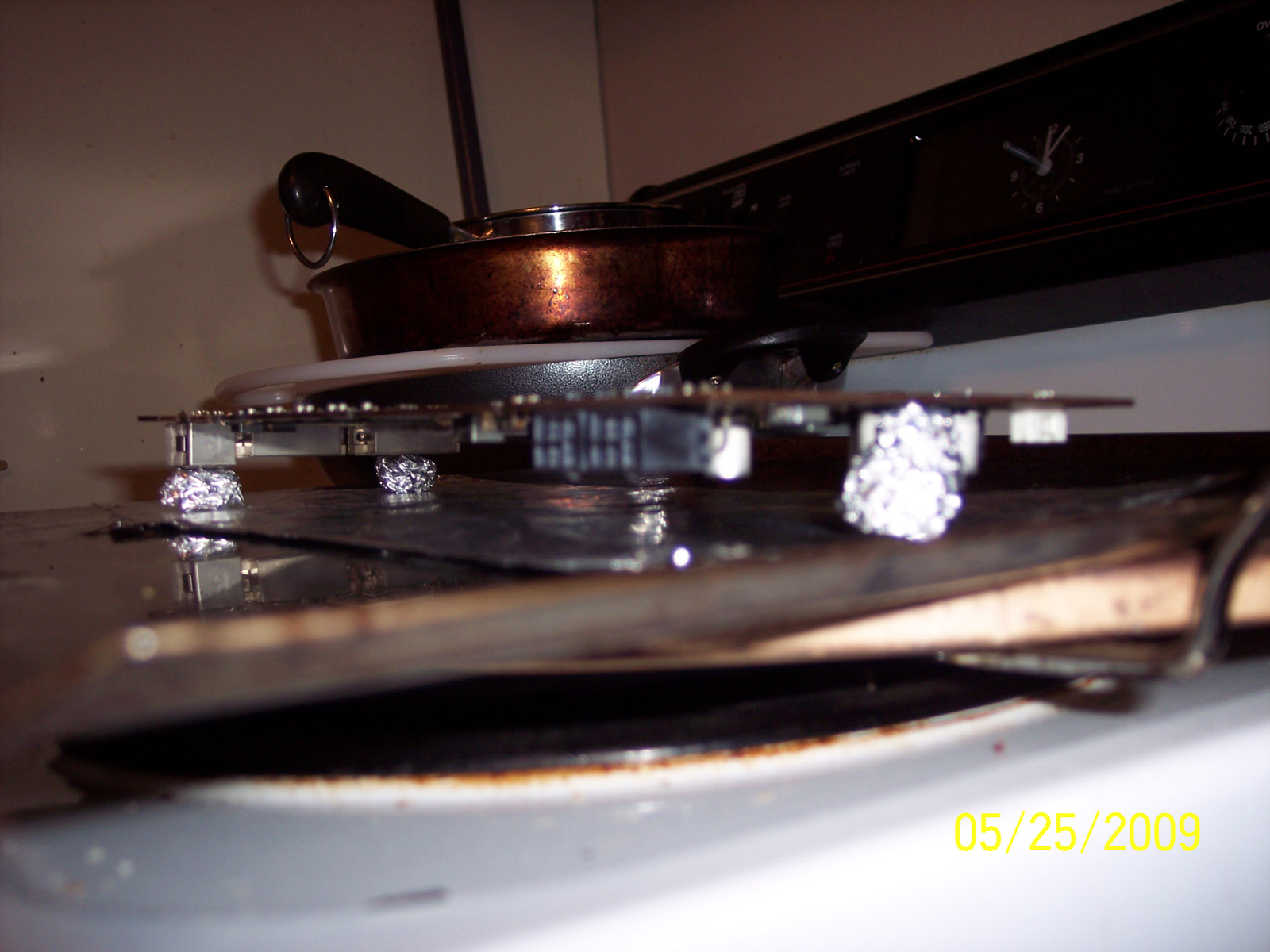 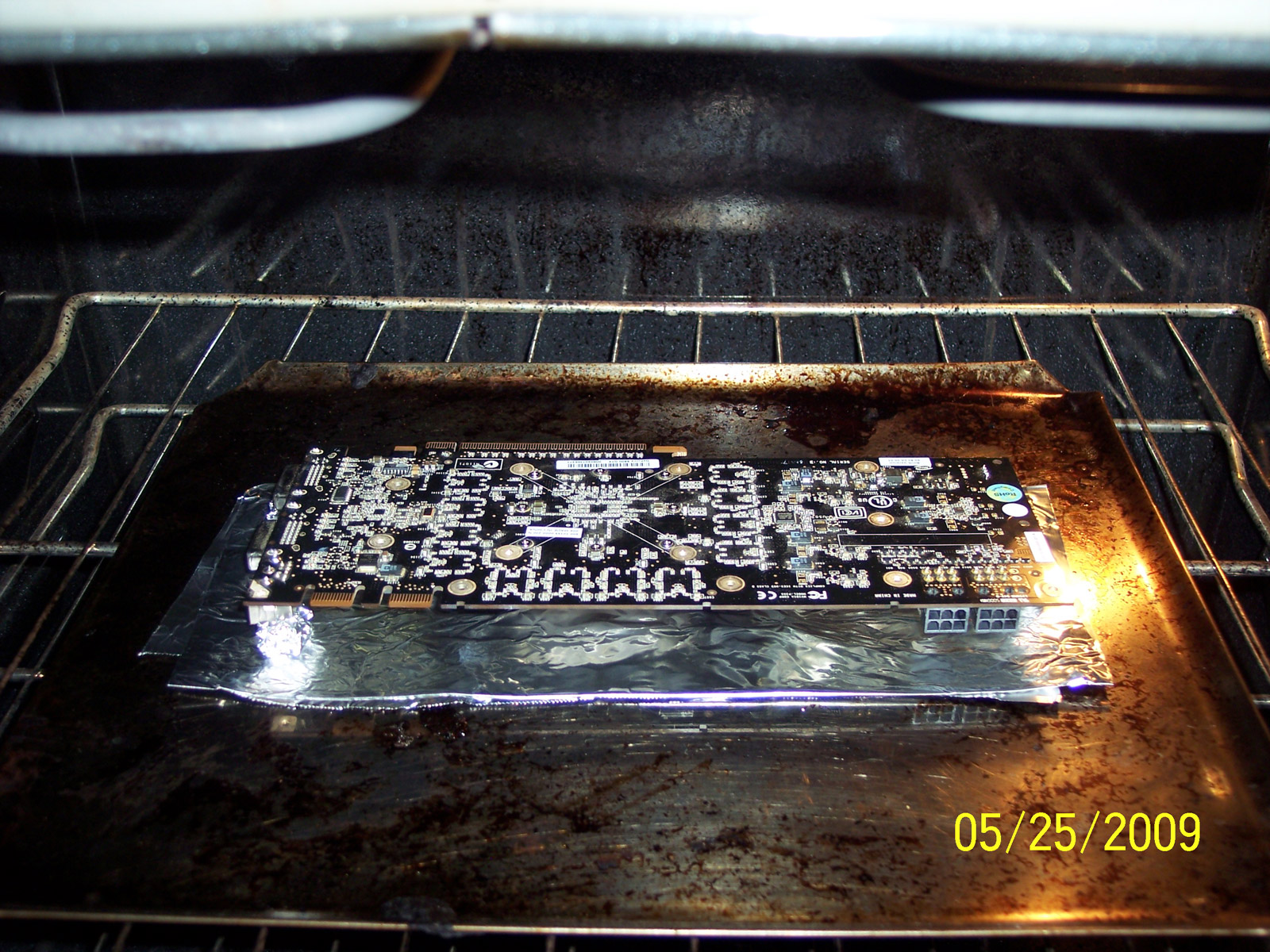 akashi_tm has been kind enough to provide a short, easy to follow video tutorial for the baking process. i would like to remind everyone please do this with utmost caution, care and patience.


it has been a good week for baking...

I bought a laptop with borked video because i was fairly positive it could be fixed by baking...

It is working now after 7m 45s @ 385f in a conventional oven. i noticed a heavy solder smell when pulling the board out of the oven.

EVERYTHING WAS REMOVED FROM THE MOTHERBOARD! All protective covers/plastic. 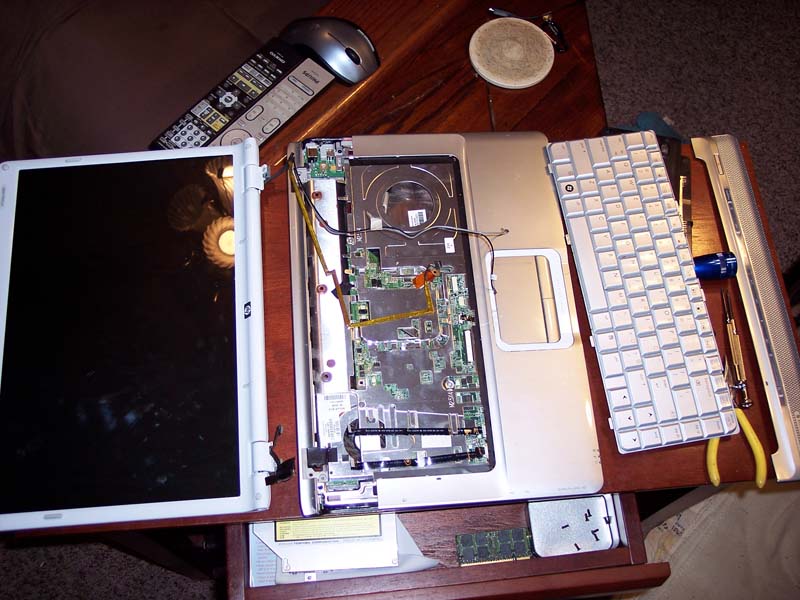 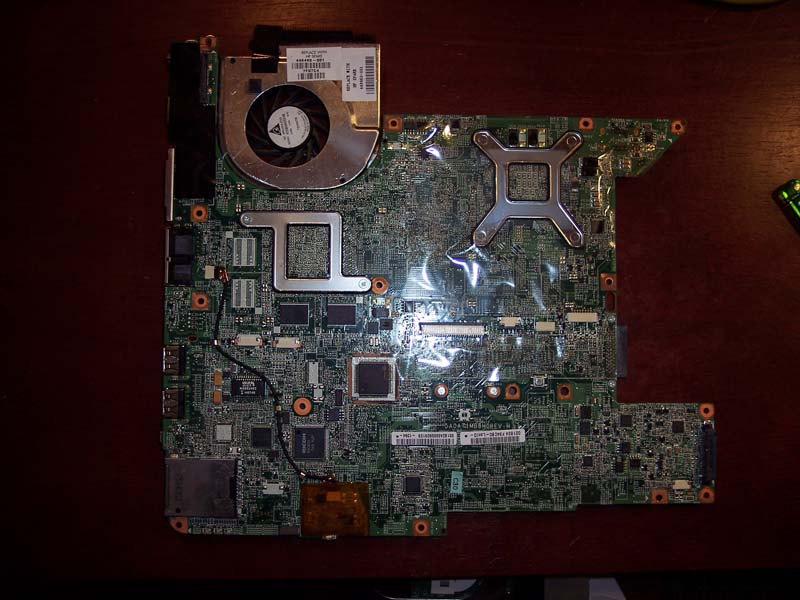 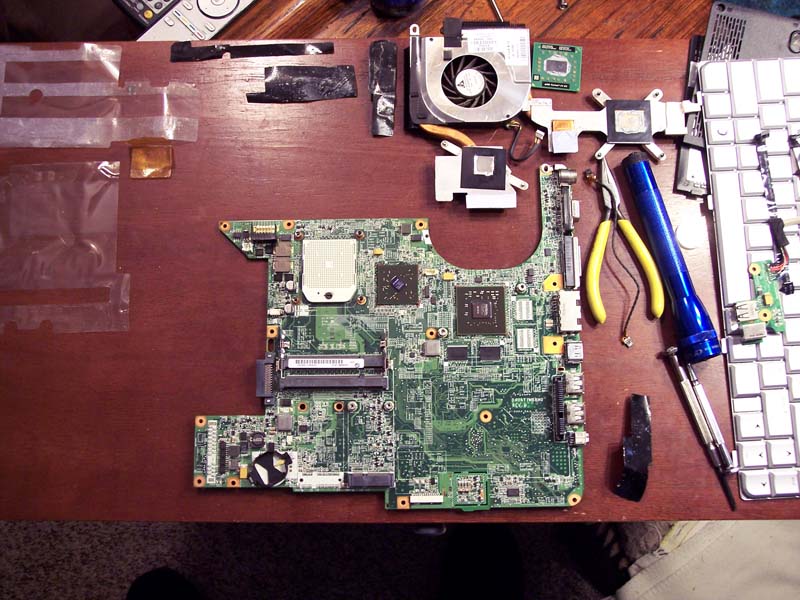 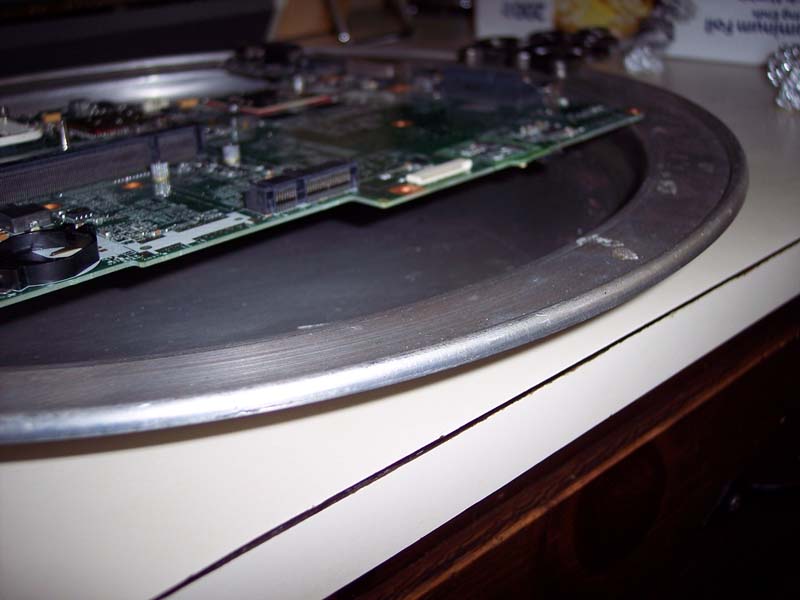 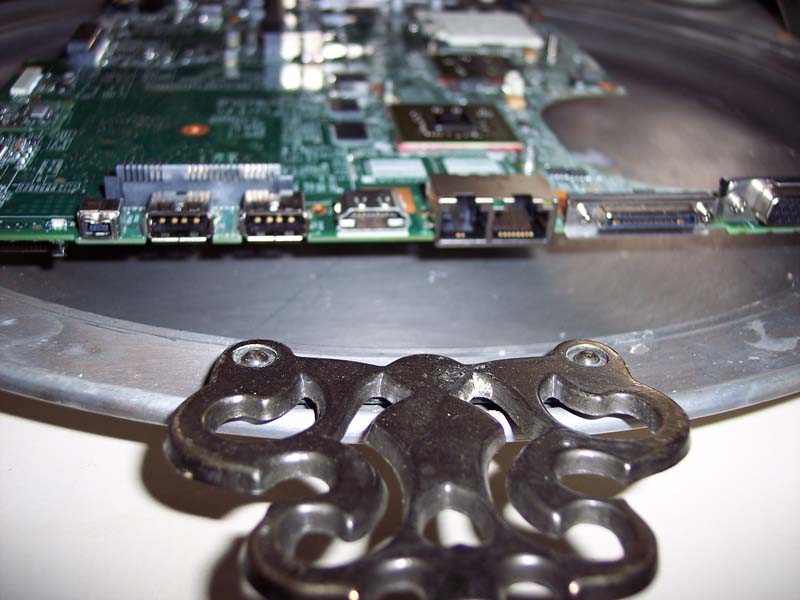 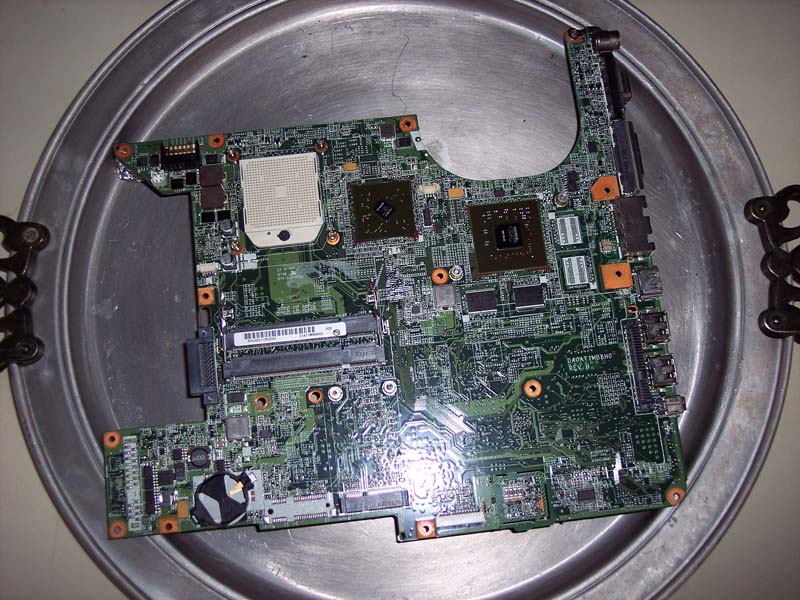 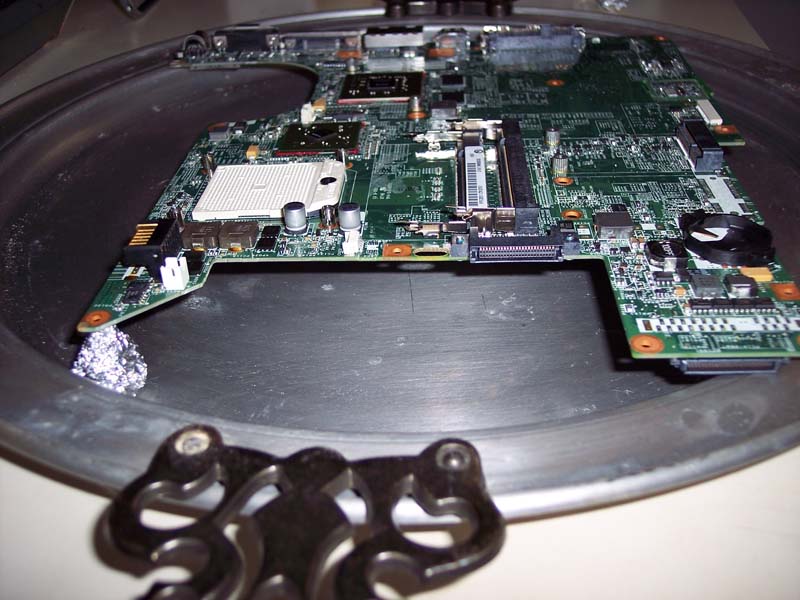 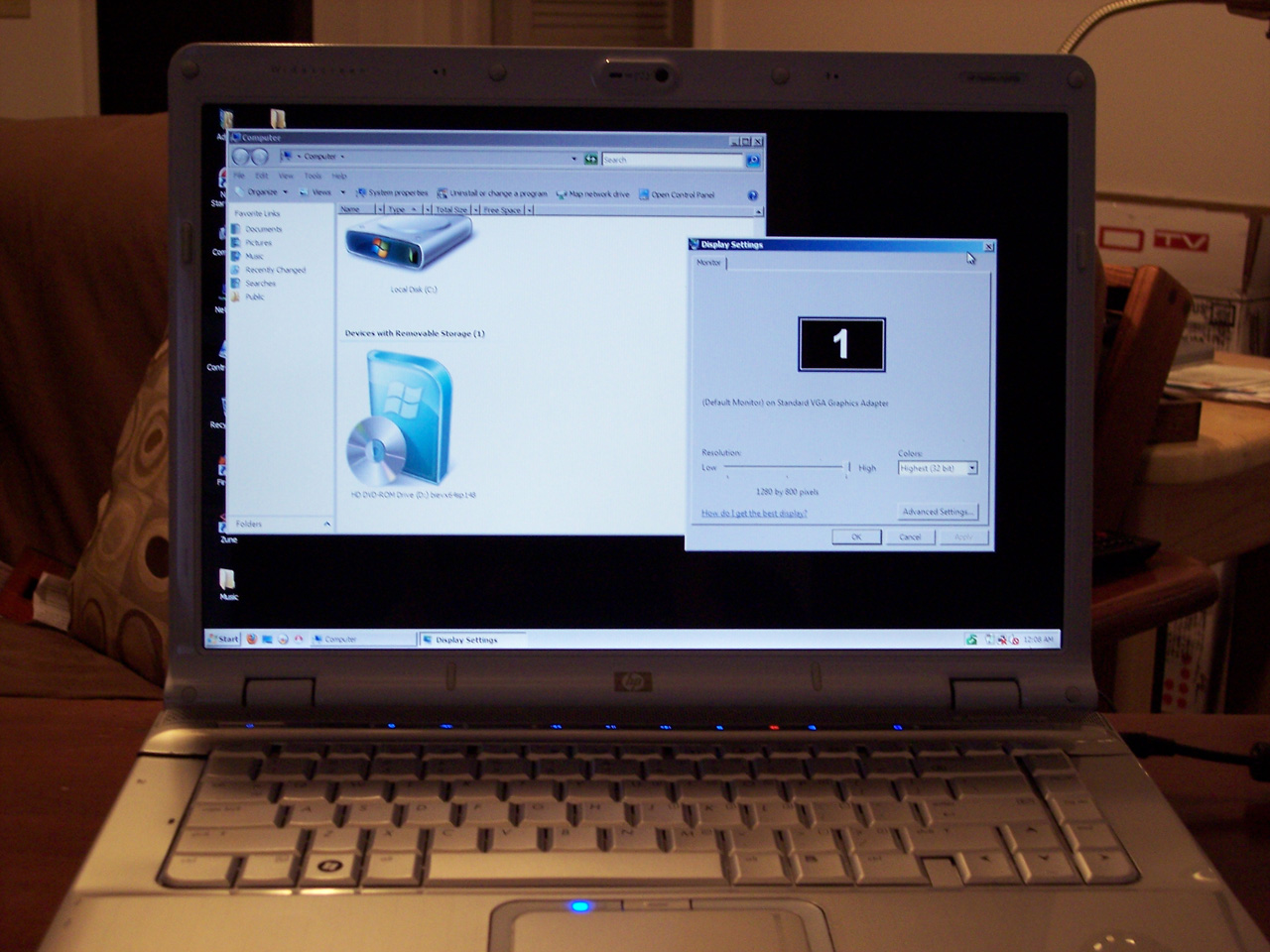 gdonavan was able to get his broken 37" LCD tv to work by baking the mainboard. check out his post!


trick_m0nkey has shown us another method of fixing a dead gpu on a laptop motherboard using a heat gun. check it out here!
Last edited: Jul 9, 2010
U

Oven? Jesus christ. Use a heat gun next time and do specific parts.
B

Are you sure these directions aren't about cooking a baked potato?

Hey, the card was dead, who gives a shit about the method. Kudos to you Haste. Take pictures next time!

your story is hilarious and awesome. congratulations, seems like some solder did indeed get separated from a critical joint.. what a crazy fix~!
T

Totally laughed.... I believe you that this worked but man!
A

Those of you freaking out about sticking it in an oven have evidently never been in a manufacturing plant that builds automobile electronics.

The machines apply solder paste, place all the parts on the board, and then the whole board goes through an oven to melt the solder and form the electrical connections.

IF the oven isn't quite hot enough it can lead to premature failure. Stress or flexing of the boards can mess up solder joints as well.

Sometimes boards that are inspected and have poor solder joints are stuck through the "reflow" oven to remelt the solder in order to make the connections better.

I recently had an 8800GTS do the same thing to me. I guess instead of using it as a paper weight I'll give this a shot. lol
C

interesting way to fix it. glad this worked out for ya.

I used a heat gun on my PS3 To fix it, but i knew which chips to apply heat to. Kudos for your fix!!!
A

Are you sure these directions aren't about cooking a baked potato?
Click to expand...

The oven makes a lot of sense, how do you think they solder on those BGA( Ball grid array) integrated circuits such as the north bridge and south bridge and video card ram? they put it into an oven just like this guy did.
T

This is strangely awesome and I might resort to it soon enough. Did you also have to remove the headspreader off the core to pull this off?
C

Modder of the year award for the OP.
I

Hmmm,
I may have to try this w/ my 7800gt when I get back to school, it was having similar problems to this.
Awesome story Haste, congratulations on the success!
S

I will be baking a fresh batch of 1950xtx this evening because of this thread.
U

haha grats on the fix!! you should post a worklog next time with some pix
N

Trombe said:
This is strangely awesome and I might resort to it soon enough. Did you also have to remove the headspreader off the core to pull this off?
Click to expand...

nope. i only took off all the bits that had screws excluding the ones around the heatspreader itself.


went ahead and re-enacted the baking so i could get some pics up for anyone interested. i edited my first post
S

may wanna clean that oven

Wow, I'm really impressed and that makes total sense about fixing the tiny fractures in the soldiering. Great work!
R

Does a resurrected video card eat brains?
U

Only comment I can think to add is 385F is on too low to make solder reflow. However the oven may spike higher. Also 8-10 minutes is a long time so keep a close eye on the board. Preheating the board 120C then careful use of a heatgun might be safer. Glad it worked and just wanted to add some thoughts on this may, or may not, be done more reliably.
M

unrealsword said:
Oven? Jesus christ. Use a heat gun next time and do specific parts.
Click to expand...

This method might wok better. A heat gun could blow the solder over to areas where it doesn't belong, whereas the over just reflows the solder.

Congrats on the fix.
P

I would be careful about this though. Heating up, melting down or burning electronics can release toxins into the air that could cause brain damage and/or death.
M

I bought 2 8800GTX cards back in 2007 and 3 months back one of them died on me. Computer froze and crashed, but since I had them running in SLI some times it would work for a few mins. Anyways I figured it out by taking the cards out and putting them in one at a time. Found the one that casued red lines and glitches all over the screen and RMAed it to BFG (got to love 100% life time warrenty).
So I get it back and what happens... 1 month later the other card has the same death! I sware to god I think they build these things to fail on purpose. Any ways sent the other card RMA and now I am happy to say both are back to running at 100% SLI happiness.

I would have never thought to try to do this to fix a card, but now I know what to do when these cards die on my again and if it doesnt work, RMA again I guess. Awesome Post!
H

awesome work. that's pretty much the same way i, along with other fixers, fix 360s. you're right about that.

btw, do you have the link to the original suggestion?
K

Sell it to a folder for cheap. They will use everything that card has left.
K

stealthy123 said:
I will be baking a fresh batch of 1950xtx this evening because of this thread.
Click to expand...

Yum, can I get some?

Another success story and I'll toss in my old X850XT that recently took a big dump. WTF, it's useless as it is now.

Sorry, there will not be any pics of my oven...
C

I might just have to call horse chunks on this one.

do you think this method will repair my GeForce Go 7800 GTX? take a look at this particular damage:


[Tomorrow I will be oven baking my card]
A

I Go to Court for Fun.

mtrupi said:
Only comment I can think to add is 385F is on too low to make solder reflow. However the oven may spike higher. Also 8-10 minutes is a long time so keep a close eye on the board. Preheating the board 120C then careful use of a heatgun might be safer. Glad it worked and just wanted to add some thoughts on this may, or may not, be done more reliably.
Click to expand...


this was my thought too. IIRC solder takes about ~700F to flow

ALL4AMD said:
this was my thought too. IIRC solder takes about ~700F to flow

i could definitely see this working, and seems like a fantastic way to reseat all the connections. i know the same method(more or less) is used successfully on rrod 360s.

one has to wonder how many cards could have been saved with this method.
A

I Go to Court for Fun.

i could definitely see this working, and seems like a fantastic way to reseat all the connections. i know the same method(more or less) is used successfully on rrod 360s.

W00t, nice fix dude, I will remember this if my 88 goes tits up in a similar fashion to yours since its now out of warranty, ty xfx.
You must log in or register to reply here.
Share:
Reddit Pinterest Tumblr WhatsApp Email Share Link
Top