Help with CrystalDiskInfo for my HD

My brother is having some PC problems. His PC takes forever (2-4 minutes) to fully boot up and recently it's been randomly shutting down. So he dropped it off yesterday for me to look at.

First I cleaned a bunch of dust out of the case. Then I scanned for virus's (with Malwarebytes and Avast) and removed some odd start up items and misc nonsense programs, which seems to help the boot time a bit. I have suspected that his HD has been failing for a while now, so I ran CrystalDiskInfo on the HD. I know the CrystalDiskInfo results say "Caution" but I figured I'd also get some [H] opinions on the numbers / info listed below.

My other thought with the random shutdowns is that it's PSU related, but figured I'd start with the HD.

Thanks in advance for any assistance. 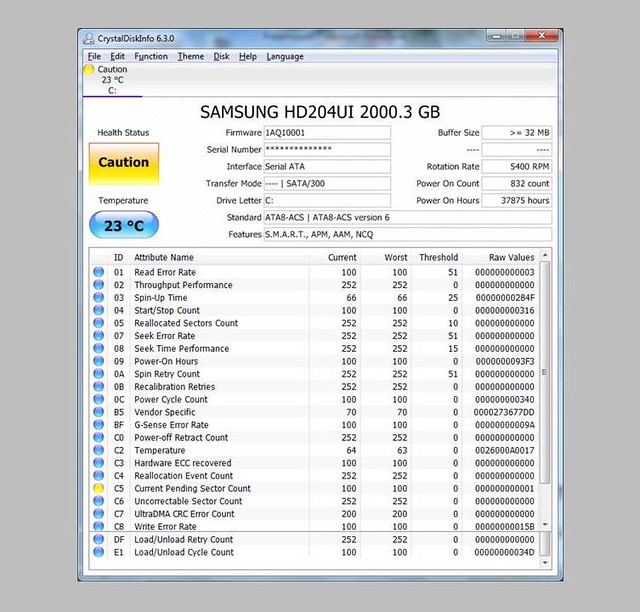 Your drive indicates that 1 single sector that you wrote to sometime in the past is now not readable. This may be a problem or not. Watch this number if it continues to grow over time you probably have a problem with the heads. At this point I would not say for sure that the drive is the cause of the system problems. Although if the pending sector is an important one it could be causing issues (which may be resolved with a full format). In either case its time to take a system backup.
D

Yep, he's got all his important data backed up to an external drive. Always the first step when we start looking into system issues.

We did end up replacing the drive. It was the original 5400 rpm drive that came in the PC a few years ago. We figured why not completely eliminate the HD as the issue by replacing it. And in the process he was able to upgrade to a WD Black 7200 rpm drive. I imaged his old drive and then cloned it onto the new one to save the time of completely reinstalling Windows.

So, he good news ... the PC boots up and loads everything 100% faster, just like a normal PC. But the bad news ... it still randomly shuts down like before. It'll run for 3 - 4 hours and then shut down. So now I'm thinking we'll look at the PSU as a possible problem??

Any other suggestions as we continue to look at things here??
D

1 potentially bad sector wouldn't be the cause of slowdowns, not even if it was the very 1st sector on the drive (which would affect the booting process to some degrees if the content was corrupt in that sector or unreadable). As for the shutdown issues are we talking about a situation where Windows itself starts an automated shutdown with the usual logoff process that takes a few seconds or longer, or are we talking about an "insta-shutdown" where the machine it up and running and literally then totally powers off like you'd pulled the plug from the wall?

If it's a typical automated shutdown it could be malware of some kind or something similar (software related, maybe) - if it's a hard insta-shutdown like a total power loss I'd suspect either the PSU itself or perhaps the potential for bad caps on the mobo that could cause a lot more problems. If you can take a close look at the capacitors surrounding the power supply connector on the mobo and generally any of the larger caps and see if any of them are bulging on the top meaning they don't have a nice flat surface but instead a slightly rounded look to them which means they're going bad and either should be replaced (not an easy thing to do) or the mobo itself needs replacement.

A simple example image of bad caps would be this:

The caps in the front portion of the image have the typical flat smooth top surface, the ones with the red arrows plainly show the curvature caused by the caps going bad. If you ever wondered why large capacitors have that funky "X" or "Y" pattern cut/grooved into the tops of them that's why: to allow the capacitor to expand (hopefully gracefully) over time and provide a visual aspect that can be seen to let someone know "Hey, I'm going bad over here..." or words to that effect.
Last edited by a moderator: Apr 8, 2017
D

Yep, after getting an explanation of the CrystalDiskInfo I agree that the HD wasn't causing the shutdown issues. But I think it was the cause of the slooooooow startup time. So we figured while we were working on things we'd just spend $100 and upgrade to a new WD Black HD and in the process it'd be a 7200 rpm HD to bring him into 2017!!! Hopefully this new HD will help avoid any future HD issues.

The shut downs are immediate. PC is on and then "bang" it's off. We'll look into a new PSU, but will look at the caps first.

At least the new HD and possible new PSU can be carried over to a new PC build down the road if / when he decides to do that.
You must log in or register to reply here.
Share:
Reddit Pinterest Tumblr WhatsApp Email Share Link
Top