H3VR is having amazing updates

So if you don't know, H3VR(Hotdogs, Horseshoes, and Handgrenades) is essentially a gun simulator for VR. It has been for a while, a little bit gimmicky, with no "genuine" game modes(scores, upgrades, etc.). That looks like it's changing as the developer(Anton Hand) has been creating a CRAZY amount of content. Not just new weapons, but entirely new levels, new systems, new improvements across the board, and finally, new enemies.

If you didn't know, he streams every few days on Twitch(rustyhand) and has been uploading update videos to Youtube pretty much every Friday. One of the new modes he's teasing this month is a completely revamped zombie mode called Rise of the Rottweiners. It's going to be on an enormous map with both zombies and civilians(who can be spoken to). The new enemies(Sosigs) are actually really fun and funny to mess around with, there's a little area that was created just for them to be messed with. When you shoot them, they bleed mustard, they can be blinded/stunned, they have location based damage, all 4 of their sections can be severed using melee weapons, or you can just go right up to them and snap their necks with your bare hands or pick them up and toss them at another Sosig.

I've just been so surprised at how awesome this game is and how dedicated the developer is to making it better every chance he gets! Good things are coming down the pipe-line!

Yep, the game has been updated regularly since release with tons of content and fixes. Anton is one of, if not the best indie developer out there currently when it comes to community support and communication.

Link for those interested - game is still only $20 and the amount of content since launch has exploded at least tenfold:

Welp, just got through a 3+ hour long session of Return of the Rottweiners. I was sweating, my arms are tired, and I can't wait to head back in! Just got a crazy sweet weapon after clearing out a certain location. I can't believe this is only the first 1/2 of the mode!

Do I like hot dogs? Horseshoes? Oh, ffs, this isn't Half Life 3, wtf kind of evil trickery is this... screw these guys...
A

Return of the Rottweiners just got a major update. There are now powerful and deadly Pacification squads, purchasable weapons, new areas(turrets, squads, high-level loot, etc.), and the addition of a "stealth" system, where suppressors/silencers and hiding actually are useful.

It is one of my go to games when I demo the Vive for friends/relatives. Alongside "Richie's Plank Adventure", "VR Fun House", and "Trials On Tattooine". Sometimes toss "Emily Wants To Play" or another horror one in there.
A 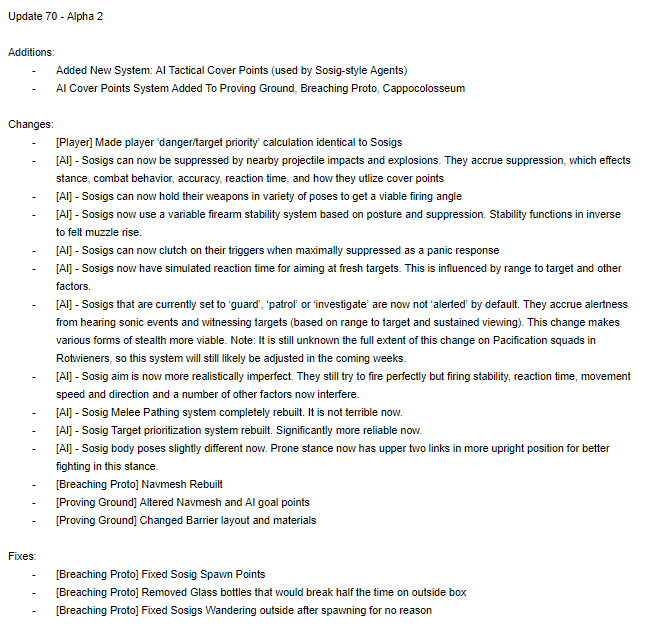 A BIG AI update is going to drop tonight. He's giving them the ability to crouch, cover fire, giving them sight and hearing, and upgrading a bunch of the scenes with this new system. This is going to be awesome!
Z

The only game I wish I still had my Vive for...
A

Oh my god! One of the craziest updates for H3VR I've ever seen! Team Fortress 2 in H3VR!
O

How has Valve not brought this developer onboard yet? Amazing work.
Z

odditory said:
How has Valve not brought this developer onboard yet? Amazing work.
Click to expand...

This still worth picking up? Sitting in my cart for a while...
Z

Fuck yeah it is!
P

The dev is personable, provides consistent updates, and you can tell he really loves what he does. There's a lot of content here for the price, as well

Mattygoes said:
I know H3VR, it's awesome. I also watched some of his streams and I am impressed by what I see there. I like VR shooters but H3VR never ever had any content that was worth playing it (imho). But if this changes now ... awesome! Thanks for the update.
Click to expand...

H3VR is my favorite "just fuck around" VR game...I haven't quite figured out all the game modes, but they are interesting for sure.


I still love grenade skeeball
A

That absolute g*#-d&$! madman actually implemented bayonets and UNDERBARREL LAUNCHERS to H3VR and he stated that the underbarrel launcher is just the first in a series of underbarrel devices!

Let me know when it becomes the Gary's Mod of VR, because that would make returning to VR worthwhile.

Have you played it? I mean, it's pretty much a gun-centric Gary's Mod in VR. I never had interest in it until I tried it and started following the dev updates
A

Why not just play Garry's Mod in VR?

ROTR got updated finally?! Just what I was waiting for!!!
A