On the healing bench today, we have a really special guest, graciously provided by our very own Halon, in this Matrox M9120 Plus, which seems to have a little problem powering on.

Matrox is not a name you hear very often anymore, but they're actually still around, making really specialized PC parts, including, as I understand it, this card. Yes, that's right, this is a graphics card with 512MB of DDR2 memory, and you can actually go out and buy a brand new one right now. Maybe. If you can find somewhere that actually sells them. From what I can tell, these are typically used in specialized applications like medical imaging devices, where image quality and stability matter more than cutting edge features or compute performance. I'm curious what Halon was using it for - maybe he'll chime in later.

One thing to note here: I'm going to call the great big processing chip on this a GPU for the sake of convention, but it may not technically be one. This card does theoretically support DirectX 9 and OpenGL, but it's not really meant for playing 3D games.

Product page for it here:
https://www.matrox.com/graphics/en/products/graphics_cards/m_series/m9120pluslpx16/ 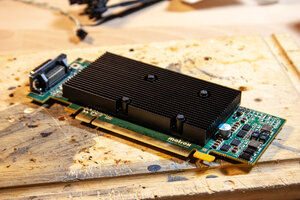 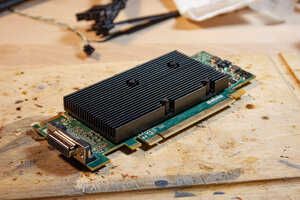 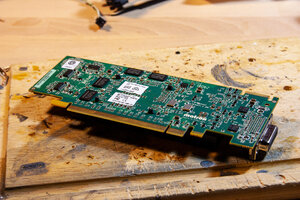 One thing I noticed is that the card is warped ever so slightly, probably thanks to the mounting pressure of the heatsink. It's not perfectly flat. It wouldn't totally shock me to find out that the reason it doesn't work is that there's a broken trace somewhere inside the card, but that's just speculation at this point. It could also be a broken solder ball under the GPU, or one of the other BGA chips on the board. 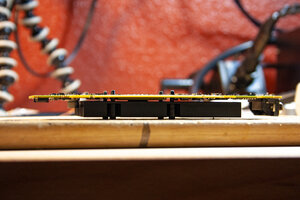 Here it is with the heatsink removed. The etching on the die is surprisingly deep. They clearly weren't terribly worried about cooling. The TIM was hard as a rock, too. Not surprising for a card this old, I guess. There's no evidence of corrosion or physical damage that I can see, though. It's surprisingly clean for a used card of this age. 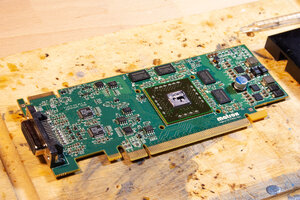 After a couple of hours of soaking with isopropanol, I was able to soften the TIM enough to scrape it off with an old gift card and my fingernail. 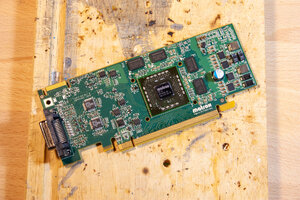 Let's take some resistance measurements.
I think this is the GPU core. This seems pretty low for a GPU this size, but it's really old, so it could be sane. It's at least not a dead short. 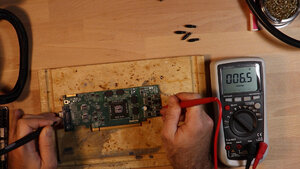 This is probably the memory rail. 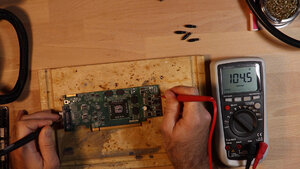 We have two more VRMs on the board, which are made up of these Richtek RT9183s. These are low dropout regulators, which work differently from the buck converters that are used for the major rails. They consist of only the tiny SOP-8 IC you see there - there aren't inductors or external MOSFETs or anything.

This is the first one. Measuring its output is going to be a problem, since the heatsink covers it once it's installed. Without a working card to check against, it's hard to say whether any of the values we see here are correct, but they at least look sane. Clearly faulty would be like, millions of ohms, or zero. 700 is probably OK. 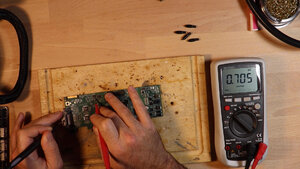 The other one is on the back of the card. Also looks sane. That's 93.5 on the meter, in case it's not clear. 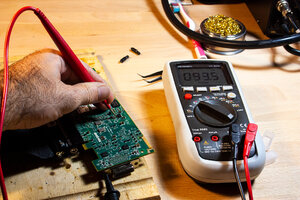 The next step is to install the card into the system and see if it works. So far, we haven't seen anything obviously amiss, besides that we're told it doesn't work. Stay tuned...

Hi there! I ended up picking up one of these because a Direct3D 9-capable discrete PCIe card manufactured by someone who wasn't Nvidia or AMD is a rare commodity, and these are going for pretty cheap on eBay. This was the first card I found, and never worked but was sold as-is; I acquired a like-new second that's managed to putter along in a spare computer after some initial testing.

All around, it is probably the slowest discrete card I've played with in a decade. While DirectX 9.0 support is in and appears to behave better than the GeForceFX series, the M9120 is pokey enough to feel like it resents you for making it render 3D. Left 4 Dead is all but unplayable at 640x480 with lowest detail settings, and coronas shine proudly through level geometry - sometimes multiple layers of it. OpenGL is locked at v2.0 and the GLSL interpreter's buggy, though I did get it to run The Binding of Isaac: Rebirth in a window if you disable shader effects at the command line. Otherwise the level transition shader effects run so slowly you could seriously get up to pee and come back before they're finished. Against all sanity, this geologically slow graphics card is being fed by a Core i5 4590, so I'll be encoding the results to 720p30 and uploading them to YouTube some time soon.

I used to be a director of an research facility that did XRD our instruments used a matrox capture card it cost about 10K to replace.
B

Ok, finally getting back after this after faffing about with real life for a couple of months.

I mentioned before that this RT9183 on the front of the card was going to be a pain to check because it's located under the heatsink, and unlike other cards I've worked on, I don't think you can run this card at all with the heatsink off. Even after just a minute or so, the heatsink gets pretty hot, and I think it would cook the core if I just started it up with no heatsink at all.

So, I soldered a wire to the output pin on this regulator, so I can check it with the heatsink on. 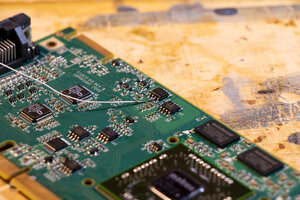 Then, I put a little dab of AS5 on it, and put the heatsink back on. 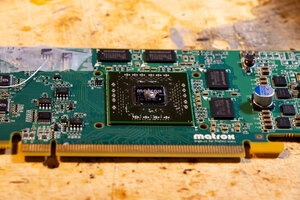 I plugged the card back into the system, and fired it up. Let's check some voltages.
First, the dangly wire. Looks sane. That's inside the range of normal for an RT9183. 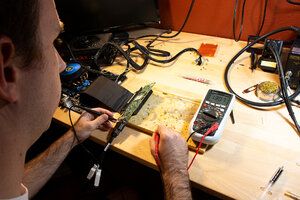 I assume this is the GPU core. This actually looks kind of low for a card of this age, but it's not an unreasonable value. 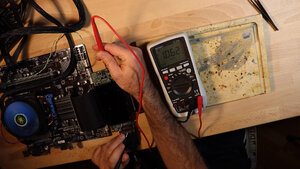 I assume this one is the memory. DDR2 memory should actually run at 1.8v, so this could be high, but I could also believe that graphics card DDR2 runs at a different voltage. 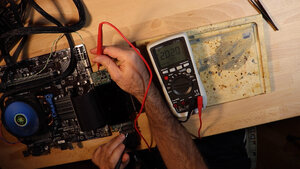 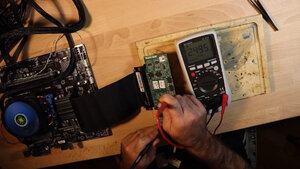 The 3.3V rail. This comes from the PCI-E slot. Looks good - same voltage as I see on other cards with this power supply. 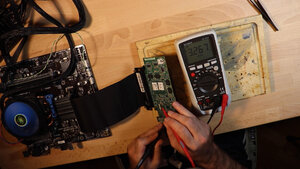 2.5V. This appears to be the same rail as the memory. Looks OK, though. 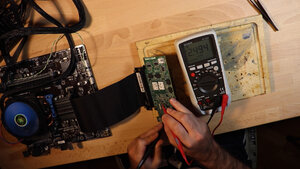 I think that's all the voltages on the card. I feel like there should be a 5V rail somewhere, but I didn't find one when I poked around the card. We're not seeing any dead circuits here, so that's good in the sense that we can probably rule out a power rail issue. It's bad in the sense that it means troubleshooting is a lot more complex, as the problem could be almost anything.

I think the next troubleshooting step may be to check the display drivers and BIOS chip to make sure the voltages are actually getting to them. An open circuit on the VCC pin to any of those would explain why the card doesn't work.
You must log in or register to reply here.
Share:
Reddit Pinterest Tumblr WhatsApp Email Share Link
Top