GPD launched their new Win Max 8-inch gaming laptop/handheld hybrid. Interesting choice of specs... Core i5-1035G7 (Iris Plus 940 iGPU). I suspect many here, myself included, would have probably preferred a Ryzen + Vega APU. Is it that there's no Ryzen 4000 APU within a 15-25W power envelope? 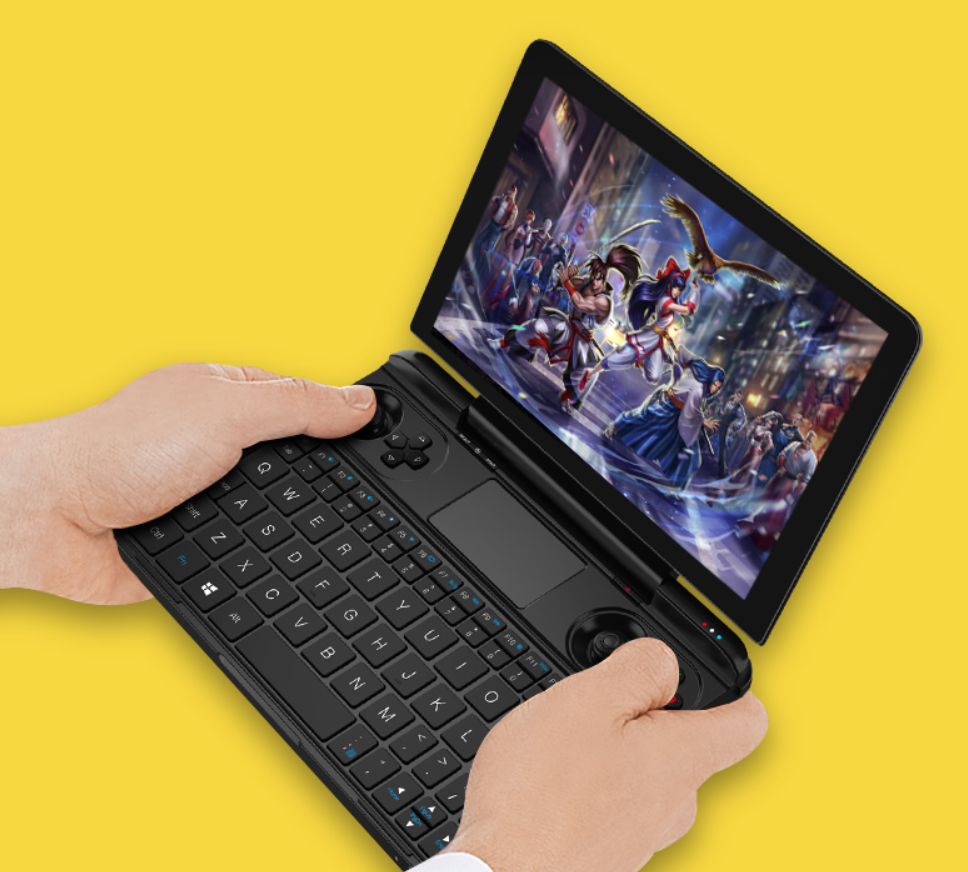 Well there are Ryzen 4000 mobile APUs within 15W TDP... I wonder why they went with Intel.

The design of this highly-custom laptop started 12-18 months back, so Zen 2 APU was just a fart-in-the-wind. But they will have a chance for the next design win!

It's nice for a company to actually ship a product (anyoner seen SMACH-Z yet? Anybody, Anybody??)
Last edited: Apr 20, 2020
J

We have yet to see how AMD's 7nm APUs work under a lower power budget. However, another part is Intel has a lot of reference designs and work out there, whereas AMD may not. One of the chief editors of Anandtech went over that recently.

As for Smach-Z, that scam started with touting Bulldozer parts, and using an Intel Atom tablet motherboard in their "prototype," lol.

The original Win Max parts with AMD hardware used AMD Ryzen Embedded V1000 series chips. That's too many generations out of date to go forward with in today's market.

If only I had the money, I'll get a GPD with the MSI gf63.
Be interesting to see how far GPD goes in the future. Iirc, they're releasing Win 3 next year.
Maybe we'll see a full blown gaming laptop.
Last edited: Apr 21, 2020
D

The Mad Atheist said:
If only I had the money, I'll a GPD with the MSI gf63.
Be interesting to see how far GPD goes in the future. Iirc, they're releasing Win 3 next year.
Maybe we'll a full blown gaming laptop.
Click to expand...

I doubt we'll see their next model in less than 2 years - these are small-market devices that are hard to design properly. It takes time for enough purchases to come along to actually pay for this thing!

There are alwaysfar more "If only I had the money" posts than peple actually looking to buy.

$999 fully loaded. Just add Xbox controller, or use the keyboard and a mouse like a Christian.

Axman said:
$999 fully loaded. Just add Xbox controller, or use the keyboard and a mouse like a Christian.
Click to expand...

Too pricey.
Not seeing the Christian reference.

Are you kidding? $999 for that is making me consider another MSI laptop, something I swore off 10 years ago.

Axman said:
Are you kidding? $999 for that is making me consider another MSI laptop, something I swore off 10 years ago.
Click to expand...

Going for this once my covid money comes in, adding another 8gb, and moving to 500gb from stock 256gb for sub $800 tax and ship. Would the HP G15 Pavilion with the same hardware plus comes with a SD slot and number pad, but they're a couple hundred extra. Don't want to spend the whole check on it because I'm getting a g604, HDDs, and a controller.

Seriously. Who the fuck does not put a SD slot on their laptops!? My 2010 pavilion had one, even my craptastic 2005 laptop I'm borrowing has one.

The Mad Atheist said:
Going for this once my covid money comes in
Click to expand...

Get the low-end model with the good CPU and up the RAM for 2x8 or 2x16gb and it's good, maybe up the NVME and add an SSD and it's golden.

51Wh battery isn't great but 3-4 hours for a not kidding gaming laptop that weighs 4 pounds is fine. Looks like they really packed in the cooling, too.

The Win Max doesn't seem to compete, price-wise, and the form factor is meh.

The SmachZ, for all that it's got going against it, is at least the right size. A netbook with a built-in D-pad is going to be awkward; might as well get a decent portable gaming laptop, and here we are.

Card readers and other non-data slots are completely optional in the new world of USB3 docks/power supplies.

I want this.
D

The Smach-Z is the right size, but as you can see, it's a whole lot harder to design it in to that tiny package .

How many more years before we see that one for sale in a store?

That is why this market is almost devoid of products - the costs of development are high, and everybody has their own personal list ten miles long about "what you're doing wrong."

You can't make a tablet-sized integrated-controller gaming PC, and satisfy everyone. Instead, the mass-market tablet-sized portable gaming devices are just running Linux/Android (and there's a matching controls/size for every desire out there).
Last edited: Apr 21, 2020
R

I admit I like the idea, but I have several concerns. First, the CPU - its a 4 core, 8 thread i5, with a max turbo of 3.7ghz? I understand a small size, but can they at least do a little better in cores and/or frequency? The CPU is one thing that can't be expanded and will be used no matter what external stuff you plug in, so having it be limited is a concern. I'd feel much better with 8 or even 6 cores at whatever performance. Could they replace it with a Zen2 (or even an upcoming Zen3) model with 8 core / 16 thread (or even 6 / 12?) and if so would they be able to add frequency/IPC for overall enhanced performance per-core? Regarding the GPU, I honestly don't know how it stacks up to the latest AMD integrated APU style setup in the 4000 Zen2 series, so it may or may not be a significant advantage. Still , even if it was only a limited comparison it may be worth it for CPU improvement. One thing I do like is the noting of external GPU connectivity via Thunderbolt 3 ; I have to wonder if an AMD variant could do something comparable either licensing TB3 or (as some suggest) the latest gen of USB will be natively "better" bi-directionally than TB3 so natural progression will handle to a more open standard with USB 4.x.

Now onto what I like - I like the small size, touch screen / high quality display, recent and powerful specs (NVMe SSD, 16GB RAM etc - though it would be preferable if these were slotted), ancillary features and connectivity (WiFi 6, Bluetooth 5 , USB 3.x A and C, RJ45 Ethernet , backlit keyboard), small power brick etc. The screen quality (IPS, DCI-P3 etc) is nice, but I admit I'm split on the resolution. I know they did that to maximize performance with the integrated (which lets face it is playable but nothing to write home about) but perhaps even upgrading it to a "mobile device / tablet equivalent" to 1920x1080 would be suitable for when it came to desktop / media etc.. use. With decent connectivity, users could plug it into whatever accessories they wished, from external displays (for media use, gaming, productivity) or patching in Thunderbolt 3 / USB 4 connectivity to PCI-E to allow for eGPU to add external graphics power for use on the native display or external ones like.

Ultimately I like the idea, but I'm interested in see some updates or revisions if possible. Also, I'd be very interested to see how standardized this turns out to be and if it is easily Linux friendly/compatible.
1

RanceJustice said:
The CPU is one thing that can't be expanded
Click to expand...

I wouldn't be surprised if the expected use case for this is probably more towards emulating old consoles like the SNES than playing modern AAA games, just like the earlier ones, even tho the page shows PC games. But if you want to play PC games note that it's only a 1280x800 screen, and yet it still has passable framerates in a lot of games, if you click the original link.

I saw a guy in a movie theater last year playing with one of the previous models before the movie started. He said it was great for that.
D

1_rick said:
I wouldn't be surprised if the expected use case for this is probably more towards emulating old consoles like the SNES than playing modern AAA games, just like the earlier ones, even tho the page shows PC games. But if you want to play PC games note that it's only a 1280x800 screen, and yet it still has passable framerates in a lot of games, if you click the original link.

I saw a guy in a movie theater last year playing with one of the previous models before the movie started. He said it was great for that.
Click to expand...

Right, and don't hate on the frequency loss. Ice Lake mostly makes up for it with a 15% IPC performance improvement over Skylake.

So that turbo speed is actually equivalent to 4.3 Ghz Skylake.

Ice Lake quad core should be an excellent no-compromise portable steam machine with integrated controllers. It''s abut twice the weight of a Switch, but 10x as powerful.
Last edited: Apr 22, 2020

I dunno, I'm starting to think it's pretty cool again.
Click to expand...

Right, it's the most powerful 8" windows touchscreen computer you can buy. It's simultaneously a good handheld gaming system (at least GT 1030 performance levels), with detachable controllers.

You can upgrade the GPU when docked via Thunderbolt), so you can also make it the ultimate portable Steam system. a 1660 Ti is not out-of-order in one of these docks! 8 threads is going to be enough for demanding games above 60fps for the next few years (and by that time, we'll have the AMD Zen 3 APU version!)