Japanese trailer for PS4 remaster coming 2017, also coming to the US and EU. Looks like it includes both the original and International versions of the game. No mention of a PC version, but given recent history there may be one released sometime after the console version, which is why I'm posting this in General.

Final Fantasy XII The Zodiac Age Launches on PS4 in 2017

About time! I've been wanting the International Zodiac Job System version since I first heard of it. Never got an US release and figured it would never happen. This is great news!

Pumped for this - this was the Final Fantasy that I missed during its first release, but really wanted to play and was just waiting for a new release.

I want a PC version for the chance that someone can find a way to mod Vaan out of the game, or make him less of a game killing "character".
T

A PC release will probably follow 6-12 months after. FFXII is the last piece of the pie I think for FF all on one platform.
C

I enjoyed FF12 immensely, it was one of the few console games that felt enormous and open world to me. I had a 60+ hours game file that wasn't anywhere near completion before classes started again and I switched games. I'm interested in this.
K

I enjoyed the original FF12. Hopefully this comes out for PC. Trend seems they are releasing most Final Fantasy games for PC. We just got the X/X-2 remaster along with Type -0, 13,13-2,13-3.
R

I found that FF12 was one of the better "post VI" offerings - I enjoyed both VII, VIII, and IX, didn't care too much for X or X-2, XI was a MMO so it can't be rated normally, XII was enjoyable, XIII and XIII-2 were less so, and XIV is again a MMO (but a great one!).

I look forward to seeing XII offered on PC, complete with International Zodiac Job Edition upgrades. Too bad its not until next year - honestly, I thought it would have debuted sooner. Perhaps Square is finally understanding the value of PC releases. However, I dojn't want to see another debacle with Japanese audio/original music etc like what just happened with X and X-2 - only to be resolved by a modder!
C

Having played the SNES FF's, FF has been the sole reason for me to even be tempted to buy consoles, but the release of FFX/X-2 on PC pretty much completely sealed it off, it was literally the ONLY game I would by a PS4 for.

People also have been modding FFX/X-2 so I have been using it to up the textures and QoL changes.

That being said, I, for some reason, simply can't get into FF7 or 8, I think 7 because the tempo of the game (not the plot) is non-existent (the time to get into combat from a random encounter in FF7 is by far the longest, and everything seem to be in slow motion), while 8 has control issues (not being able to properly remap Squall's gunblade trigger button is a MAJOR minus, and playing on a Steam controller is very unfluidic due to the fact that it emulates keyboard, and thus can only move in 8 directions, unlike with a controller).

Was about to start 9 before D3 Season 6 started, then FFX/X-2 happened, still trying to plow through FFX (stupid Yu Pagoda's, and stupid Penance for requiring fully developed characters).

Back on topic, if FFXII remaster comes out in 2017, then we can expect it on PC (if at all, though a reasonable expectation) only in 2018, given the time it took for FFX/X-2 remaster to appear on PC (exactly 1 year after PS4 release).
M

A little late to the party, but here is cam footage of gameplay from San Diego Comic Con. Looks pretty damned good, actually. Looks like they took the time to improve the textures for the higher resolution and increased the polygon count on 3D models (at least the characters).

They share some names, but as far as I'm aware there is no connection between FF12 and FFT.

just remake Final Fantasy 8 so I can be happy already!

Would this remaster look better than it would on PS2 Emulator with resolution and image res cranked up?

I think it does. They also got rid of the horrible motion blur, which you can't get rid of through emulation. Also, you can make the textures sharper, but you can't increase the fidelity. There is already a video comparing what we've seen of the remaster with the original emulated on PCSX2.

I don't know why but I felt this XII was pretty boring. It was one of the few that failed to capture me and I loved FFT. So I don't know why it was so meh to me. They need to hurry up and make a VI from the ground up.

This is one of my all time favorite FF games but I'm hoping they release it to Steam eventually.

No earlier release for the JP version, it's an international release? Laaaame.

Just got a notice in my e-mail today about a Collector's Edition that is exclusive to the SE online store. They are only making 2,000 copies and they sell for $199.99 USD. Of course, I wouldn't be sharing unless I already grabbed one . 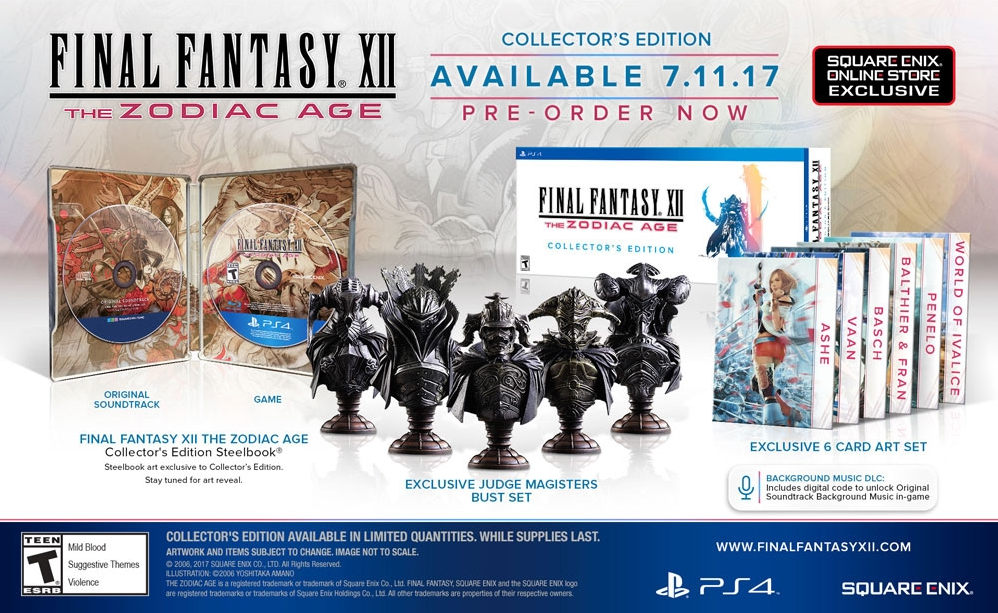 There is also a limited edition that includes typical fare for an SE title (steelbook, digital OST) for a more reasonable $49.99 USD.
Last edited: Jun 9, 2017

Just got the e-mail today that the PC version is coming out February 1!

A physical collector's edition like the PS4 version is also available.
https://store.na.square-enix.com/pr...asy-xii-the-zodiac-age-collector-s-edition-pc 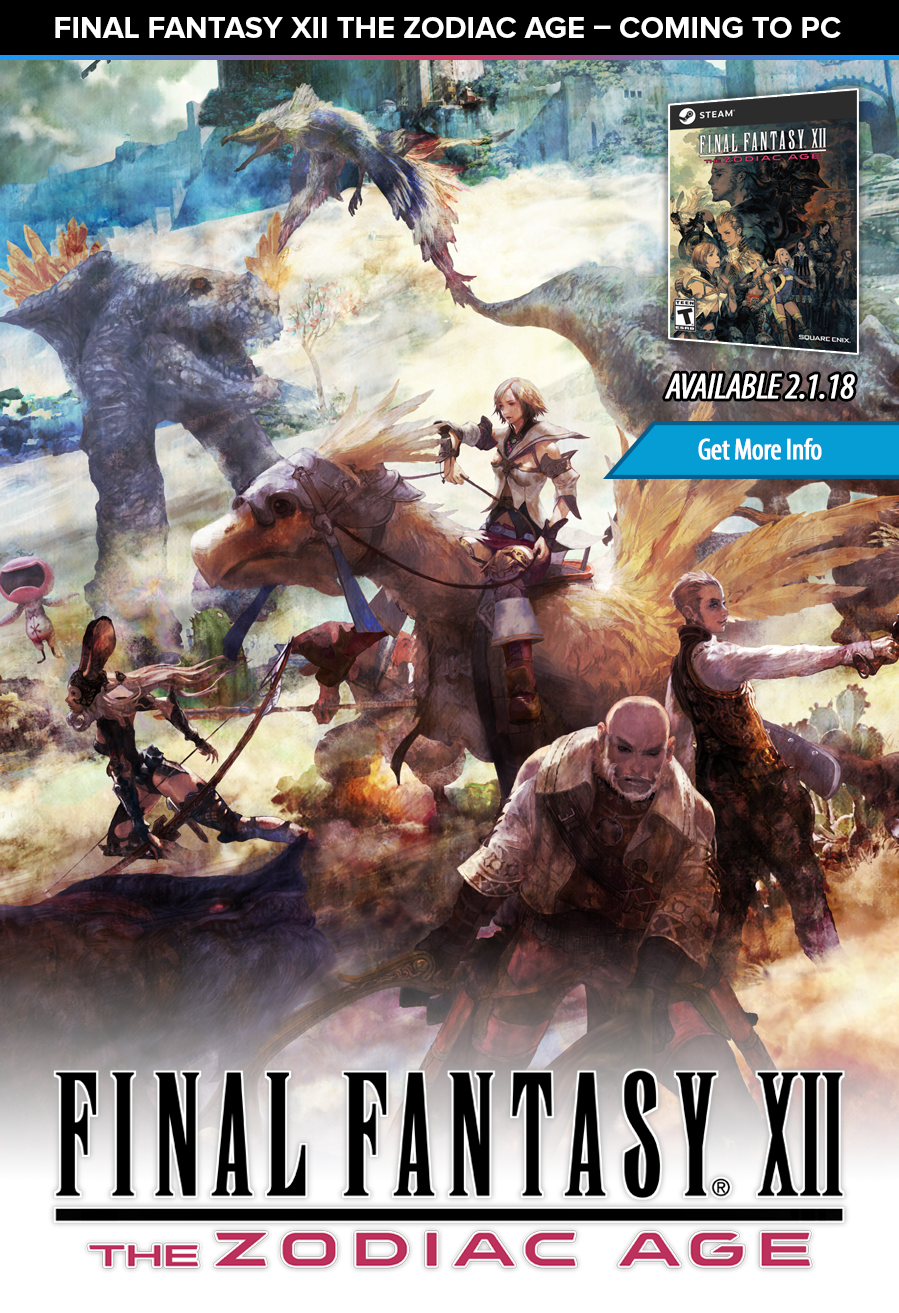 Woo, here's to hoping that it's a smooth release.
R

Looks like good support for PC features, JP Audio option, and all the various Zodiac edition upgrades plus more! If its done as well as it looks, I'm in for a copy.

Armenius I saw this & jumped for joy. Now I'll get to play XII & XV properly on PC this year, which will be quite satisfying.

Key thing here too is they added support for 21:9!
C

I hope I can get my hands on that collector's...
S

Can't wait to cruise control a large chunk of the game by Berserk, Haste, Shell, Protect, and whatever else-ing Vaan so he attacks 5 times in the span of anyone else's 1 and hits like a truck full of bears with an electrical current running through it - while Ashe tanks shit in a miniskirt.

Balthier was an interesting character. Vaan and Penello, not so much. Not a bad FF game. FF13 was a trainwreck.
K

med1kl said:
Balthier was an interesting character. Vaan and Penello, not so much. Not a bad FF game. FF13 was a trainwreck.
Click to expand...

FF13 was unplayable. I had to stop. It was painful. I'm excited for this one, I missed it back when it first came out.
C

I had no issues with ff13. It was certainly more appealing than 12 was to me. Mostly the art style and gambit mechanics felt off. I'm not saying 13 was great or 12 was bad, I just enjoyed 13 more.

That being said I'm grabbing this when it comes out to try the zodiac changes and just to replay it.
D

CptCabbit said:
I had no issues with ff13. It was certainly more appealing than 12 was to me. Mostly the art style and gambit mechanics felt off. I'm not saying 13 was great or 12 was bad, I just enjoyed 13 more.

That being said I'm grabbing this when it comes out to try the zodiac changes and just to replay it.
Click to expand...

Having an actual class system helps a ton, at least with how characters feel. One of my biggest gameplay issues with the original release is how everyone felt the same and there was no real reason to pick one character over another for your party. Implementing jobs takes care of that pretty well and helps each character feel unique. The combinations you can do with the job classes are nice as well.
V

Kevin5255 said:
FF13 was unplayable. I had to stop. It was painful. I'm excited for this one, I missed it back when it first came out.
Click to expand...

Oh come on ffxiii wasn't that bad. It get more hate then it deserves.
D

vegeta535 said:
Oh come on ffxiii wasn't that bad. It get more hate then it deserves.
Click to expand...