Facebook has rolled out a new page today that you can use to check your IQ in just a matter of seconds! Simply click here and find out if you are one of the people that has recently been tagged with having an intellectual disability.

Recently, we shared information about the potential misuse of your Facebook data by apps and websites. We also shared plans for how we're taking action to prevent this from happening in the future. Check below to see if your information may have been shared with Cambridge Analytica by the app “This Is Your Digital Life.”
T

Funny that they needed to specify CamAnal by name instead of "How can I tell if my info was shared (with anyone)?"
E

I am not sure that page is really needed for that "test", if you have a facebook page period I think you fall into one category of intellectual disability. That page just helps diagnosis how bad it is.
W

Haven't had my coffee yet so my IQ is pretty low, but I'm still not falling for the FB trap...I'm no zucker.
A

I think an intellectual disability is a given if someone didn't know what Facebook was in 2004.

Sounds like a way to categorize people into groups who they can restrict.
(Tin foil hat on) so the government can limit access to your freedoms later on.
F

So, they going to make one to also show how much information they gave away (with permission and great fanfair) to the 2011-2012 Obama campaign? I mean, it was only on a much greater scale so I'd assume it might be of interest to folks. :/

Or like previously mentioned - to anybody else? I mean, they don't survive on selling facebook data right?
O

at least they updated it for mobile (website) so you can check multiple permissions to apps at the same time and remove them...
S

More quizzes and tests to gather your info
B

Well, you have to admit, if any company knows anything about "intellectual disabilities", it would be Facebook. I mean,...I thought one had to be intellectually challenged to have a Facebook account?

This headline sounds like a link to a virus, and the iq check is wether or not you click it. . .

How do I find that out without logging in?

Took one for the team

TheGeekFreek said:
Took one for the team

TheGeekFreek said:
Took one for the team

Thanks "friend". Wish I knew who it was. I don't use any FB apps for this very reason. My public profile is bare bones, don't care if they know my page likes and my birthday is bogus.
K 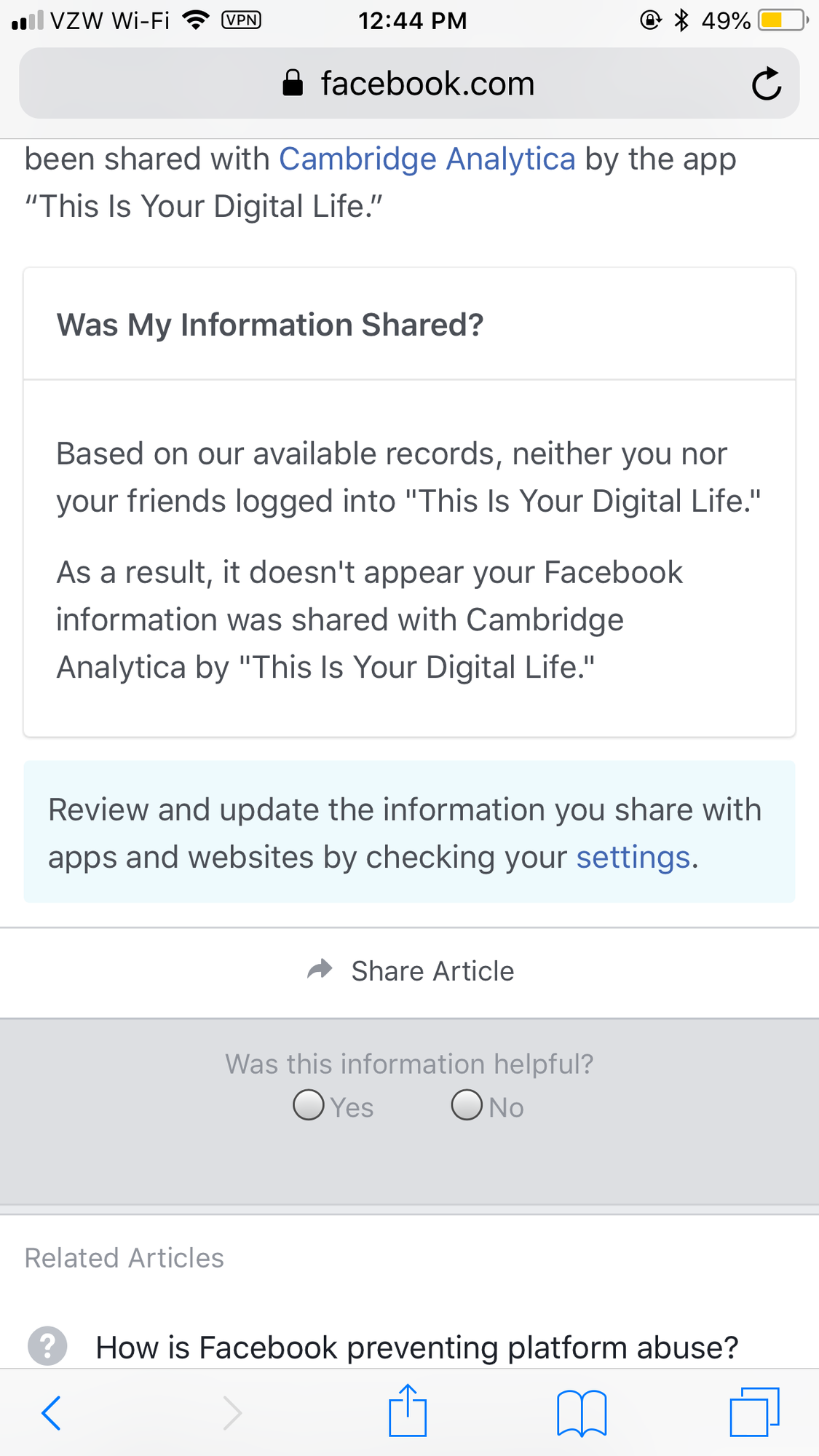 So facebook just got busted for violating privacy with these stupid quizzes/tests, and now they want me to take an 'IQ' test?..... I'll get right on that. I'm sure this won't open up access to all my/friends data like last time.....

All the "oh mah gersh if you have FB you are teh stoopid" posts are really really original
Good going guys!

Keep up the good work

Yea its a shit system, however unfortunately its how some people stay in contact with other people.....really unfortunate

And I bet y'all have gmail accounts etc so Google has even more info on you all!

thenapalm said:
Funny that they needed to specify CamAnal by name instead of "How can I tell if my info was shared (with anyone)?"
Click to expand...

Muh Russia narrative. I'm pretty sure Camb. only is a story because they leveraged FB tools for free. Does that make them worse than people who paid for the data?
D

Biznatch said:
So facebook just got busted for violating privacy with these stupid quizzes/tests, and now they want me to take an 'IQ' test?..... I'll get right on that. I'm sure this won't open up access to all my/friends data like last time.....
Click to expand...

FB collects and sells ad data. A third party app that people had to click agree to on profile access, just like the prompt you get installing an app that needs access to GPS, camera etc etc does. So people agreed to share all data with FB and then agreed again to share that data with this third party app, the owner of the app then shared that data with another third party for campaign use. Which is already against FBs terms, as you are giving away their product, not something FB wants at all. FB sells ad data, everyone should know this, however these news pieces actually are not even about FB sharing data, but a third party app, but FB is a name everyone will notice in a headline, so it gets used.
You must log in or register to reply here.
Share:
Reddit Pinterest Tumblr WhatsApp Email Share Link
Top