So I finally caved in to the upgrade itch and bought an open box EVGA RTX 2080 Ti XC Ultra from Microcenter. Was marked down to $1015 with full manufacturer warranty intact. Got the card home and installed it - fresh install of Windows 10, system imediately locks up on the account creation part of Windows 10 setup. Card artifacts and eventually BSOD's with Video scheduler error. Contacted EVGA support after trying the card in a 2nd system and getting the same results as soon as it gets into Windows. EVGA was awesome as usual and is taking care of me, they are sending me a replacement card, should be here in the next few days. The person I spoke to at EVGA made a comment that someone else had registered the card and clearly had just returned the card to Microcenter rather than going thru EVGA support. After my RMA was approved and I packed the card back up - I decided to peel back the "open box" sticker that Microcenter had slapped on the box: 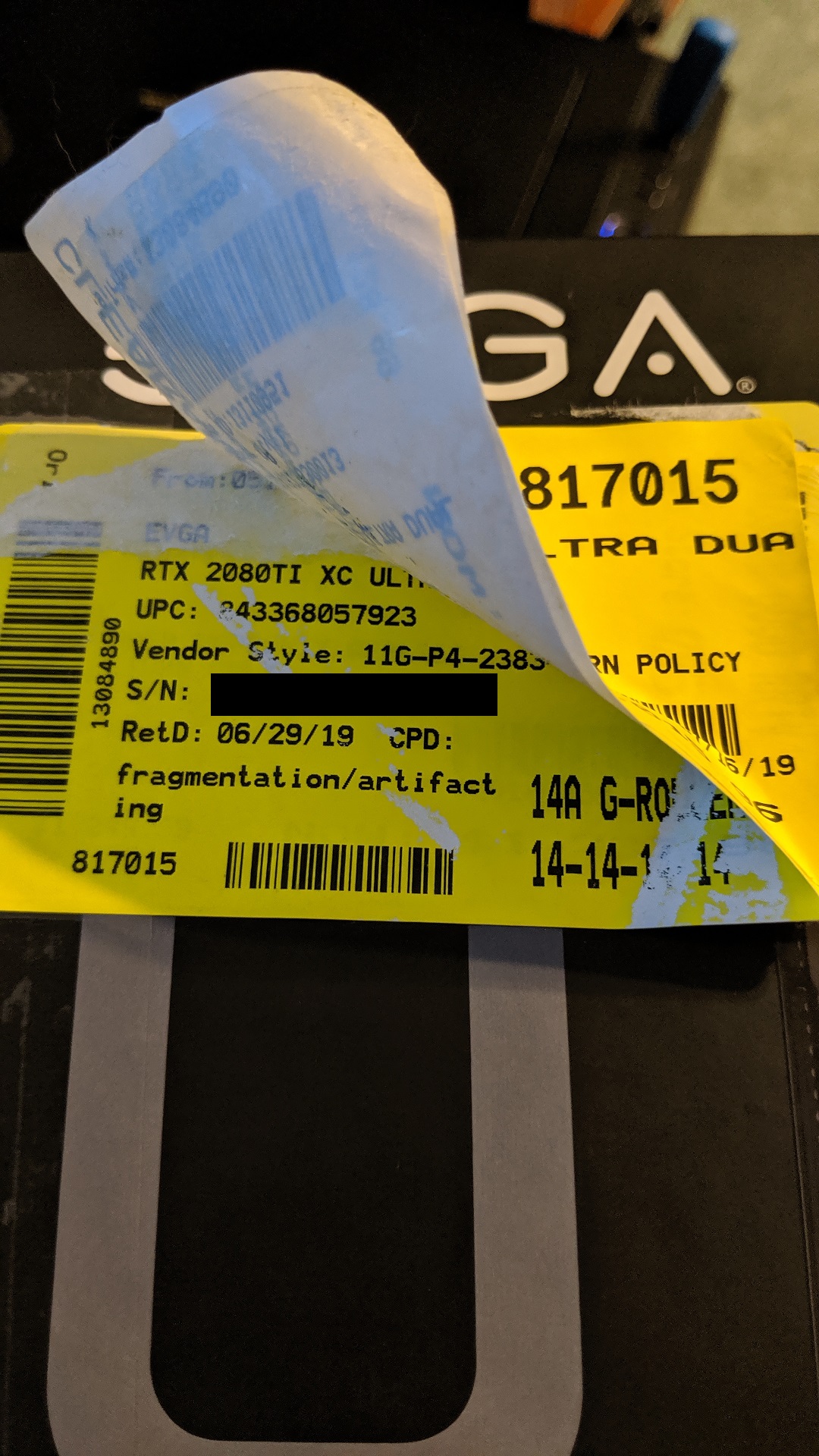 Don't care at this point, EVGA taking care of me. They even asked if I got a good deal on the card, lol.
M

Lol those notes would've been important to list while on the shelf.
G

Mav451 said:
Lol those notes would've been important to list while on the shelf.
Click to expand...

You'd think so, but nope!
M

This is why I NEVER buy opened/returned hardware. It was returned for a reason and I am not willing to risk any potential issues. Most of the time you can buy the same item brand new for about the same price anyway. Heck I just bought the same exact card brand new as the OP for only 90 bucks more which is nothing when spending well over $1000. And does that used card even come with the game bundle? If not then I did not pay any more money when you factor that in.
G

I bought a Zotac Gaming AMP RTX 2080 off Amazon warehouse deals for $300 less than I paid for EVGA Ultra XU OC.Both were fine but now I think I should look for one of these RTX 2080TI deals and hope i get a bad one and return it for new one,sounds like a great deal to me.
I am cheap but also a nutbar I bought 4 RTX 2080 but not one RTX 2080Ti because it is double the price up here in Canada from what I paid for a Zotac Gaming AMP RTX 2080.
D

Wow, that's some shady shit from Microcenter. But as always, solid support from EVGA.
P

misterbobby said:
This is why I NEVER buy opened/returned hardware. It was returned for a reason and I am not willing to risk any potential issues. Most of the time you can buy the same item brand new for about the same price anyway. Heck I just bought the same exact card brand new as the OP for only 90 bucks more which is nothing when spending well over $1000. And does that used card even come with the game bundle? If not then I did not pay any more money when you factor that in.
Click to expand...

EVGA approved my RMA and the card will be here by 7/30.
M

EVGA approved my RMA and the card will be here by 7/30.
Click to expand...

Well it is good that you got the games and that it worked out but that still changes nothing about how I feel dealing with open boxed items. Again I paid only 90 bucks more for the exact same item and got a brand new card with no hassle or drama. My time alone and not having to deal with contacting companies and waiting for another card is worth the 90 bucks more.
A

Microcenter open box sucks. The three things I’ve bought open box there open box have had issues. (Two motherboards and a PSU)
I don’t bother with it anymore.

I don’t think they actually test them at my store. I think they just throw them back on the shelf and figure the next customer will test them — or bring it back if it doesn’t work. I agree with the previous poster. My time and frustration levels are worth more than 10% of the hardware cost.

Nothing more frustrating in computer building than getting a faulty motherboard and only realizing it after you put the whole case together. I’ve NEVER had a faulty new motherboard and I’ve bought probably 50+ Enthusiast motherboards over the years between swapping out my hardware and building rigs to sell or for friends/family, but I’m one for three on Microcenter open box motherboards.

My 290X was a open box from Amazon, I went for it because it was cheaper and well the 290X was hard to find at the time. I know why it got returned, that card had almost no overclocking head room at all. Worked great for me for many years but it was obviously a card that just barely made the cut.

Usually I'm all for open box, comes with the same warranty as a BNIB, if it's defective, you're covered, usually you end up with a solid product for cheaper, win win all around. But this is one of those cases where you get what you pay for unfortunately Sketchy move on MC's part (clearly this is known DOA), slapping the sticker on known-defective, but hey, you're getting taken care of by EVGA, all will be made well eventually.

That being said, if this is a high-uptime component and you can't afford downtime, I'd steer clear of OB type buys. Personal rig stuff (I don't rely on my sig rig for my income), yeah, I'd go open box with no worries, it's not the end of the world if I can't game for a few days while trying to save some money.

If it's any consolation, looks like you're saving ~200 bucks by going OB, just gotta jump through some hoops (per Amazon, didn't check NowInStock).
Last edited: Jul 29, 2019
P

Well I finally got the replacement card. Got around to testing it.

Firestrike Ultra and Timespy comparisons. I did not have a Timespy run on the Titan Xp with my 2600X. 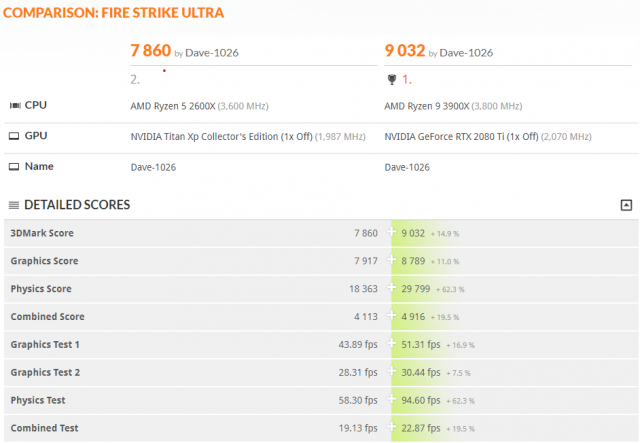 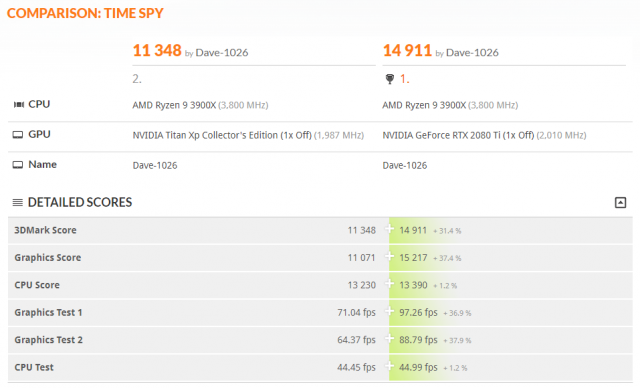 I really must get the wrong people when I've spoken to EVGA support for help. It took me 3 weeks and multiple contacts just to get the fan/heatsink on my 2080 Ti hybrid kit replaced (which went on a 2080 Ti XC Ultra), it was an absolute nightmare.

The first rep I spoke to lied to me just to get me off the phone, saying it was normal operation for the VRM fan to spin for a couple seconds and stop over and over and that the fan was uncontrollable in Precision X1 even though it clearly states on their website that it is.

I called back a week later because I didn't believe him and pushed the issue further with a different rep who was going to send a replacement, but then over the course of a few days, a higher technician derailed that and wanted me to try a different BIOS.

When the technician didn't respond after I told him which model 2080ti it was for the BIOS, I sent an e-mail to the support team and got some sass and had to e-mail that agent's supervisor, who then turned me to someone else who basically blew me off and said a different BIOS would do nothing.

I called in again and got another rep who actually used the hybrid kit and understood the problem. He requested that I send in the heatsink and fan for RMA. While the second rep didn't ask me to, this one did. He was nice and helpful and at this point I was starting to get desperate, so I did as he asked, dragging things out further. I followed up a few days after the RMA Department received the fan heatsink and he said he was waiting to hear back from them. Four days later I followed up again and never heard back.

Called in again and the next rep I spoke to said a manager would have to call me back about my issue, which never happened. Called back the next day and the last rep told me it was being shipped out, and the rep handling the case would e-mail me a tracking number, which also never happened.

I got a notification from my UPS My Choice later that day. It was mailed out with next day shipping, I guess that's the least they could do after 3 weeks of hell. Funny thing is the same day it shipped out the hybrid kits came back in stock. Coincidence? I'm uncertain.

I really felt like at one point I was going to have to pull a PayPal chargeback and throw my card's warranties to the wind just to get some kind of resolution.
Last edited: Aug 8, 2019
You must log in or register to reply here.
Share:
Reddit Pinterest Tumblr WhatsApp Email Link
Top