So I'm downgrading/upgrading to the slightly slower but more cores 2667's.

There is a potential/possible issue though. Since the microcode updates, and I'm not sure if it its the Windows 10 patches or this Dell T7910 BIOS ones I have had occasional crashes. Seemingly at random but definitely more when I have the system heavily loaded. Never really know though. System might be up for 3 weeks without a single problem or it might be up for 3 days.

Since this is a machine I rely on to make a living I've bit the bullet and ordered two 2667 V3 cpu's to replace these ES ones in hopes that I can end the random crashes. The other day I lost a half a day of work and I cannot risk that instability. I got these in November of 2016 and really have had zero issues until around when the spectre stuff came about. So I'm personally attributing the crashes to that. I've run 24+ hour ram tests and everything else and cannot find any other reason for crashes. Cannot remember where but I did read something on some site that indicated that this is likely the reason for crashes on the early stepping V3 cpu's. I'm not going to try and roll back the various Windows patches and try to downgrade the BIOS on this machine though.

I believe these are the earliest QEYM stepping which is probably why I've had crashes. That being said, if you run them on an older board without all the microcode updates for spectre crap and some of the Windows patch updates for the same they will probably run just fine.

On the plus side I'll soon be helping out on the challenges again with even more cores.

If one of you wants to test first before buying I'll also work with you on that and if they are unstable for you then I'll take them back and eBay them.

Once the others I'm replacing these with come in I'll post a pic of the actual CPU's. That will probably be late next week. For now a CPU ID and Intel IPDT screen shots. On IPDT, if you are not aware, brand string and SPBC are expected fails on ES and QS CPU's... SPBC is actually a check if the CPU is an ES or QS and the brand string is not encoded on ES and QS CPU's. 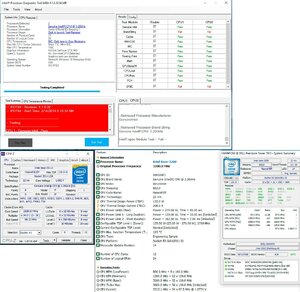 Well an update. Also bought two special Dell OEM liquid coolers that are available for the Precision 7910 Workstations. Those are hard to find but since I deal with Dell on some business things I got a guy on the EMC side who hooked me up with them as a warranty item! Pretty slick little radiators that a are a lot quieter than the standard heat pipe coolers. They are actually made by Asetek who is the OEM behind a lot of watercooling setups. Anyways got those in today so I shut down, pulled the ES CPU's out and put the new ones in with the fancy new liquid coolers. Pretty slick - the BIOS recognizes that the liquid coolers are installed and shows a new page for them. Up and running and all is good.

Here is the rub. Just a bit ago I'm sitting here and decide I need to clean the AS goop off the old CPU's and heatsinks. On close inspection under a magnifier I just noticed that one of the CPU's has two of the tiny SMD caps are gone on the bottom of it. I was in IT work for 15 years and have built hundreds of computers. I know for a fact I did not break those off. I do vaguely remember when I got those ES CPU's in a couple of years ago though. I remember being very busy but had to have them in. So I just hurriedly stuck them in and fired back up to get back to work. What I now realize is that I didn't even really look at them close other than to note the speed and confidential on top. So now I suspect that one has been the cause of the occasional random crashes.... I've seen at least a dozen times in the past CPU's with one or more of those gone and still work perfect while some end up totally dead and some work but are flaky. So there is a good chance that the one is flaky. Oh and as I figured above, these are QEYM. If you are curious - I bought them from one of the China sellers on eBay back then.

So with that being said. Price drop! The one with the two SMD's caps missing for $25, the other one for $75.