Digitimes Claims that Memory is Cheap, and that AMD is Gaining Market Share

Citing industry sources, a recent report from Digitimes claims that prices for 1TB "gaming" SSDs fell more than 50% since 2018. According to their data, a 1TB SSD used to cost 10,000 New Taiwan Dollars (about $324 USD), whereas they're going for NT$3000-5000 ($97-$160) tody. This seemingly lines up with historical price data, as a 1TB Samsung 860 EVO, for instance, dropped from $330 in January 2018 to $128 in December. PCPartpicker's 1TB SSD chart paints a fuzzier picture, as the "average" selling price for SSDs is much higher than the list price for the most common drives, but even the average has fallen significantly since early 2018. Digitimes also claims that 4GB and 8GB memory modules have fallen to $30 and $60, respectively. According to PCPartPicker's DDR4 charts, that's nearly half the price they were going for about a year ago, and Digitimes believes that memory prices should drop even more in the first quarter of 2019.

Meanwhile, the publication's sources also claim that AMD has a 17% share of the "gaming market," whatever that means. AMD themselves recently highlighted Mercury Research's market share numbers, which claim that AMD has a 15.8% and 12.1% slice of the desktop and notebook markets, respectively, but those numbers only represent Q4 2018.

Despite growing adoption of NAND flash chips in SSDs, the prices will see a sequential drop of over 15% in the first quarter of 2019 thanks to weakening total bit demand for PC-use SSDs and SSD price falls... The sources continued that shipments of gaming DDR4 high-spec modules have been affected by the shortages of Intel CPUs, driving gaming consumers to turn to AMD platforms. This has pushed up AMD's share of the gaming market to 17% and increased shipments of DDR4 3200 MHz and under modules, compared to a slowdown in shipments of 3600-4000 MHz modules.

One of the better times to build a PC I can remember. Video card prices have returned to normal, memory is cheap, cheap SSDs, and 4 to 12 core processors that are reasonably priced.

There is an expectation that tech comes down in price over time as volume production increases. DDR4 has been around for a long time now (4 years?) We should be in volume production. The per GB price should be half today for DDR4 compared to what it was in 2011-2012 for DDR3, when I was paying $4.99 per GB for basic non-OC DDR3 RAM.

RAM is still very much overpriced.

Until we reach that level RAM is still overpriced. Don't let anyone tell you otherwise.

I would imagine ram cost/GB is going to scale pretty linearly with cost/transistor, given we're not exactly finding new ways to make a dram cell (variations on the 6T). That transistor cost been stagnating, if not rising, on new nodes, even if mechanically the chip size is shrinking with node. I don't know how that tracks over time as processes mature, so perhaps <=20 nm'ish nodes are now cheaper per transistor than 28nm. That's not to say that present memory prices aren't artificially raised, BUT, there's going to be a floor. So there needs to be a dose of sobriety in terms of expectation rather than assuming that it's going to just keep dropping and dropping and dropping and dropping. 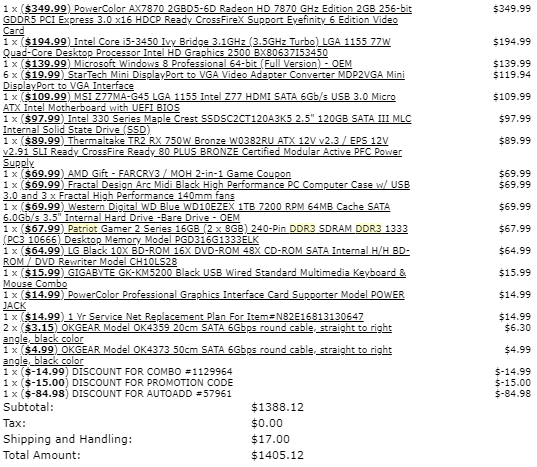 Not really cheap, it's where it was before artifical inflation caused prices to skyrocket, also a 1 TB drive that is MLC at $300 doesn't compare to a 1TB QLC/TLC drive going for 120$.
N

1Nocturnal101 said:
Not really cheap, it's where it was before artifical inflation caused prices to skyrocket, also a 1 TB drive that is MLC at $300 doesn't compare to a 1TB QLC/TLC drive going for 120$.
Click to expand...

Well worth the cost back then, considering what a game-changer it was/is.

You forget that tech like this is supposed to get cheaper with time.

Can you imagine if we still paid the same per MB of storage as we did in the 1980's?

Zarathustra[H] said:
Can you imagine if we still paid the same per MB of storage as we did in the 1980's?
Click to expand...

False equivalence, dynamic ram isn't storage and have totally different trajectories (think of how much you could complain about how slow a HDD is relative to DRAM over the past 40 years). As I wrote above (and was subsequently ignored, although I screwed up and made an analogy to SRAM), cost per transistor is not really dropping with process nodes, and a dram cell's architecture is pretty stable (trench capacitor). Supporting architecture is changing incrementally, but not majorly, and towards greater complexity. Ergo, costs/MB are expected to drop, albeit asymptotically. Add some form of price fixing and a massive increase in demand over the past several years, and, yeah, we're going to see prices rise, even if that is a historical bump.
You must log in or register to reply here.
Share:
Reddit Pinterest Tumblr WhatsApp Email Share Link
Top