So I am at my wits end regarding this, and I'd appreciate any suggestions.

I have a HTPC setup in my livingroom. It is used for both TV and music. I have it configured as the center of a multi-room system via the analogue Zone2 outputs on the back of the receiver. A cable run goes to the basement where I have a distribution amp, and from there I have RCA cables run all over the house: Kitchen, office, master bedroom, back porch, etc.

My most common source for music is Spotify, as it is just too damned convenient.

The problem: Denon lists most of their receivers as having Spotify connect, but the function is spotty at best.

Sometimes you pull out your phone, and it connects to the receiver and just works. Sometimes no matter what you do it refuses to connect. Sometimes you see the receiver detected in the list of available playback devices, and it just refuses to connect, and sometimes it doesn't even show up in the list of available devices. I have googled the issue and the internet is full of others with the same problem, and while there are often many suggested solutions, but never a silver bullet.

Nothing seems to work. If at the given time the Denon receiver has decided it doesn't want to work today, it's just not going to work no matter what you do. Then another day it may start randomly working again.

The only thing that seems to reliably get me back and running again after this has happened is to do a reset to factory defaults on the unit. The thing is, a home theater setup is highly complex, and restoring all the sound settings and room corrections after a reset is at least a half an hour process, requiring a quiet house. This is not something I can do every couple of weeks when the unit starts acting up again.

This has often resulted in us just giving up and listening to music over our phone speakers, which is INCREDIBLY frustrating given the expense and time I have put into this multiroom sound system. The Spotify Connect feature on Denon receivers simply is so unreliable it is completely useless.

The thing is, it's not just my unit, or my model. I have tried it on both the AVR-x3300W I have now, AND the previous unit I had, the AVR-x1300W, with exactly the same results.

My network is fairly decent (Procurve gigabit switch in the basement, with cat 5e cables in the walls to all major devices and Unifi Wireless Access points) and connected to the outside world via Fios gigabit service which has been damned near flawless, so I doubt either of those are the problem.

I do have the whole house on a VPN service (PIA) and while that sometimes causes problems with certain services, I doubt that is the case here, as I had these problems

So, I have started thinking about alternatives I can do to fix this, and have come up with the following list:

1.) Buy a Spotify Connect compatible device and plug it into the one of the many either analogue RCA, HDMI or optical inputs on the back of the unit, thus bypassing the internal disaster of a feature

2.) Running another length of wire from my main PC and playing analogue audio from there into the back of the Receiver as a music source.

3.) Using DLNA audio output from my PC to the receiver. (I've tried this, but found that there is an unacceptable time lag, and it too is very unreliable, but maybe I just need to set it up better)

I'm at my wits end here, and would appreciate some input and suggestions. At this point I want to stab everyone over at Denon....

Moreover, I'd like to understand if there is anyone out there with a Denon receiver who DOESN'T have these issues. Anyone for whom it just works as intended. This problem seems so common on the internet, that I assumed this feature is just broken across all Denon (And possibly Marantz?) units.
Last edited: Sep 11, 2018
F

I don't play much music on my Denon, so I'm not much help with Spotify. But, I'm wondering if the app is being automatically updated on your phones and causing connection issues with the receiver? Have you updated the firmware on the Denon?
D

Have you tried updating the firmware on the receiver? I know the 3300 is last year's model, and with the release of the 3400 maybe there is an update available for the 3300? I personally run an Onkyo in the bedroom and a Yamaha in the living with no problems with Spotify on either, not that that helps you at all though.
P

I have a six year old Denon Reciever and it generally doesn't have any problems with Spotify Connect. It is nice because then I don't have to turn on the TV.

DahlKen said:
Have you tried updating the firmware on the receiver? I know the 3300 is last year's model, and with the release of the 3400 maybe there is an update available for the 3300? I personally run an Onkyo in the bedroom and a Yamaha in the living with no problems with Spotify on either, not that that helps you at all though.
Click to expand...

Yeah, I've kept it up to date. Just did the latest update last week. It added some sort of Auto Low Latency Mode or something like that. Don't think it's relevant to me and my usage.
D

For Spotify and Denon Receiver connection, it is not a hard thing to do that. Here is an article to show you how to use Spotify on Denon Receiver via the DRmare Spotify Music Converter. 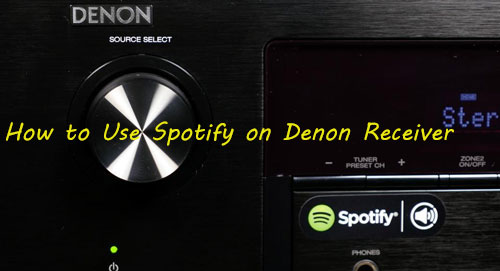 Someone is a bit late to the party...

In order to stay on topic, Zarathustra, I'm assuming you were able to get this fixed, if not, could you run the PC app and have it play in zone 2 or does it have to be at the receiver level for multi-zone playback? I've never actually used Spotify connect via my Denon.
You must log in or register to reply here.
Share:
Reddit Pinterest Tumblr WhatsApp Email Share Link
Top