Earlier this month I bought a pair of "MDR-V6" headphones from eBay. Price was about $40 shipped to my door which was obviously too good to be true. That, on top of the seller already having a bunch of negative feedbacks for selling counterfeit headphones was a pretty clear sign. I decided to get a pair anyway just to see what exactly a counterfeit headphone actually looks like. I had a pair of Sony MDR-7506 headphones in the past (Pro version of the MDR-V6) so I’m pretty familiar with the sound. I also borrowed a newly purchased pair from a friend who got them at a local store. About a week after the auction the Seller was "no longer a registered member of eBay" lol. Package took almost a month to arrive and for some reason went all the way through New York, even though that isn't exactly on the way from Hong Kong to California... 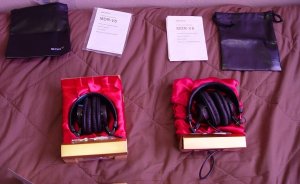 The fake headphones came rather loosely packed and did not really form-fit into the packaging like the authentic pair do. The manual is a cheap copy, and the little leather pouch feels like its made out of cheap plastic-leather material, definitely a different kind of leather than the authentic pouch. 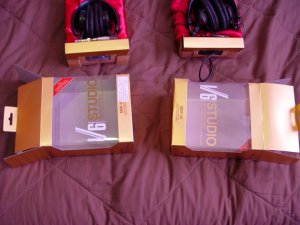 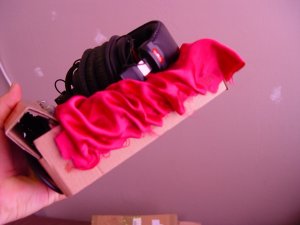 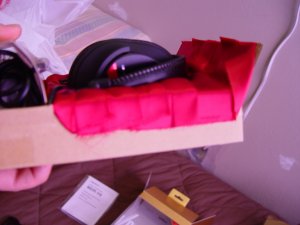 With the fake headphones, the red material is sloppy and hastily attached, on the authentic pair it is clean and professional looking. The boxes are nearly identical but on the fake pair all of the printing is done on a plastic insert that is behind the first plastic layer of the box. On the authentic pair, there is only one layer of plastic, that is part of the box, and its printed directly on there. 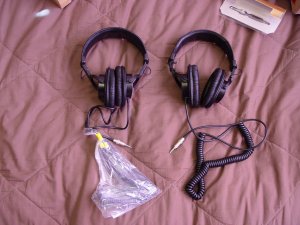 The fake pair did not come with the cord wrapped up while the authentic pair did. 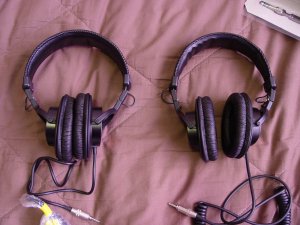 One thing that is immediately obvious is the headband. The authentic pair actually clamps on my head pretty well. The counterfeit pair feels like its about to fall off my head and has very little clamping force. The headband itself is slightly different between the two. The leather material is very slightly different, and the stitching is tighter on the authentic pair. The metal part where you adjust the headphone to fit your head is slightly different. On the authentic pair it slides in and out like a well-oiled machine and you hear a click for every notch. On the counterfeit pair adjusting the size feels like youre adjusting something cheap, and there is much less of a defined click for each notch on the metal. 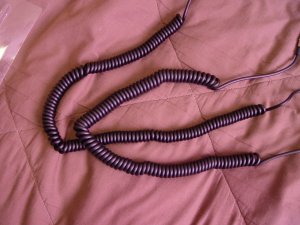 The cord on the fake pair looks to be made of a slightly cheaper rubber and the cord isnt coiled as tightly (top cord is authentic, bottom is fake). 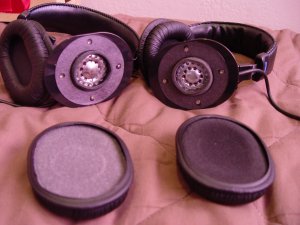 Now were getting to it. There are clear differences in the driver. The metal on the authentic pair feels like thin steel, while the metal on the counterfeit pair is definitely aluminum. The configuration of the holes is slightly different as well. 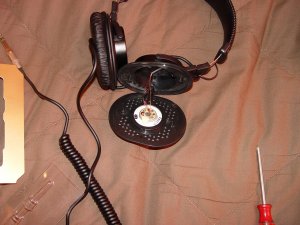 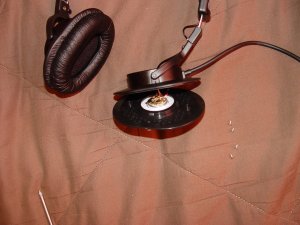 Authentic on top, fake on bottom. Overall the drivers look a lot closer to each other than I expected. You can tell that there are some differences when you look in through the metal in the front.

Overall, Id say its a pretty good counterfeit. It would be extremely difficult to tell that it was a fake by looking at it without having a real pair sitting right there.

The sound however, reveals the biggest difference.

Listening to the authentic pair, one of the first things you notice is the rather bright treble that these headphones are known for. Along with the punchy bass these are basically the exact same sound I remember from my MDR-7506 headphones. There is really no mistaking that treble, these are the real deal.

Listening to the counterfeit pair, you immediately notice that the highs that you expect to be there are simply gone, not there at all. MDR-V6 headphones have a fairly easy to identify sound signature and these definitely dont have it. In addition to the lack of treble, the bass was also muddy with each beat not being particularly defined. Pretty much the kind of sound you would expect out of a ~$20 pair of headphones purchased at K-Mart. Even though there are a lot of subtle differences between the two, you could probably write off the differences as them coming from different factories or something. The sound is a clear giveaway though. I feel bad for anyone who bought a pair and thinks they are real, as they simply dont know what they are missing.
Last edited: Oct 2, 2020
4

Thanks for the write-up GotNoRice!

I've always wanted to compare counterfeit vs. authentic myself, but never wanted to put in the money!
D

I think most people would be fooled and just think they got a second hand well worn pair or something. The sound does change after they have been burned in. I don't think that would help for the cheap pair. But it might a little... Some of the lower end sony headphones do use similar looking drivers, so possibly thats where they got them from? Though that is unlikely because it would be cheaper to mass produce your own!
0

Youre nuts for spending $40 to fill a curiosity of what "a counterfeit headphone is like" (i could have told you that for $20 )... but whatever floats your boat.

Anything on ebay that is not strictly from an authorized dealer like buy.com ebay account (theres some other dealers who do ebay as well) is going to be fake pretty much. flash memory, earphones, headphones, all stuff thats super small and very hard to benchmark for the average person. I always cringe when someone says "got a sweet deal on headphones from ebay they were less than half!!", because i dont want to break it to them that they got swindled good.

Curious what you would have "told" me since the two headphones are extremely similar. I have serious doubts that anyone who didn't have an authentic pair right there to compare with would be able to tell them apart.

Anything on ebay that is not strictly from an authorized dealer like buy.com ebay account (theres some other dealers who do ebay as well) is going to be fake pretty much. flash memory, earphones, headphones, all stuff thats super small and very hard to benchmark for the average person. I always cringe when someone says "got a sweet deal on headphones from ebay they were less than half!!", because i dont want to break it to them that they got swindled good.
Click to expand...

But you know, most people, when they think of a counterfeit product they are thinking of something they would be able to look at and easily identify as a fake; as in, obvious cosmetic differences that stand out. There have already been several threads at places like head-fi where people have posted threads "Are these headphones fake" and even posted pictures only to have the majority of the responses be "Looks identical to my real pair, they are probably not fake". Again, there were small cosmetic differences between the two Sony headphones but it wasn't until you actually listened to them and realized they sounded like crap that they could conclusively be identified as counterfeit.

About the $40 I spent, I already sold the counterfeit pair to a friend for $25 who is going to use the pads and cord to replace old pads and a broken cord on his headphones so I'm really only out $15.
M

Thanks for the effort on this writeup. I hope it's appearing elsewhere online.
Q

Sorry to revive the thread.

Thank you for this thread. I was going to buy a pair from eBay but you discouraged me. I will buy it from a local store.
I hope I will enjoy them. 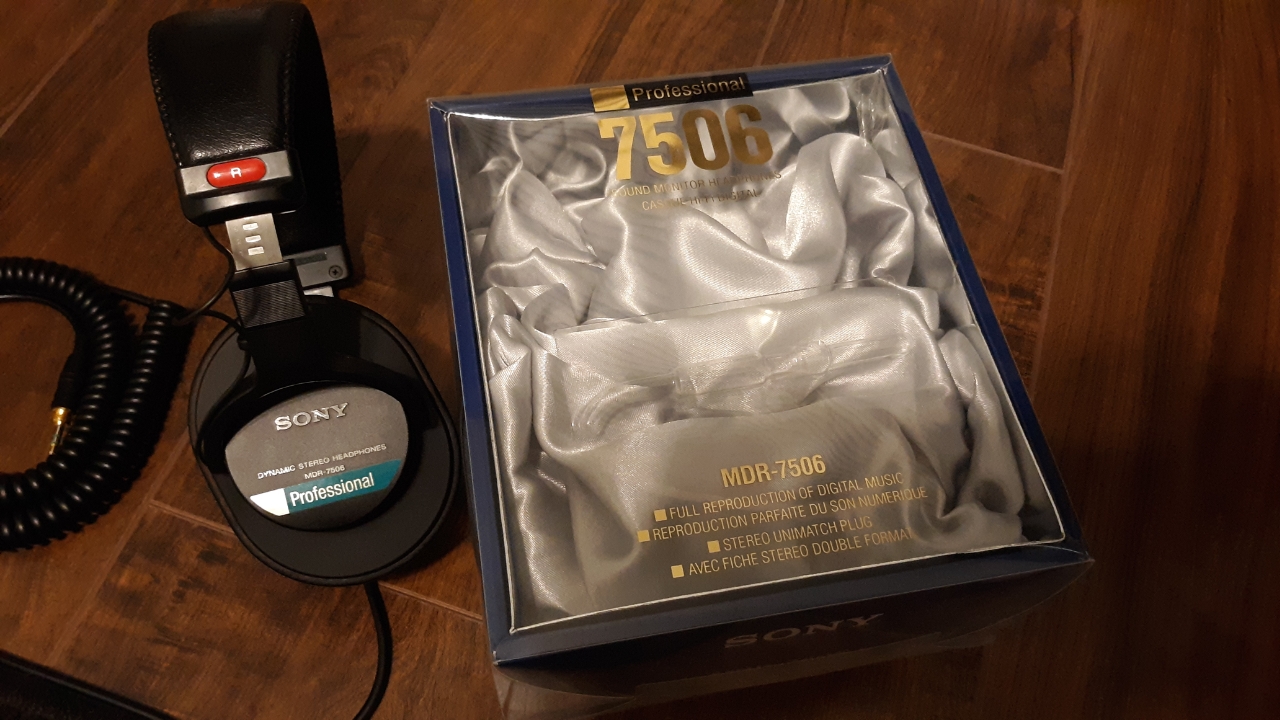 !! What a glorious headset!! Fits my tiny head pearfectly and the sound is out of this world clear! Actually pretty sad often because taco hear (bad)things that she didn't hear before with regular earbuds!

I still have a pair of MDR-V6 headphones (an authentic pair). They have held up great over the years, although I have switched over to using velour pads from the Beyerdynamic DT250, which are a direct fit. They are my go-to headphones for traveling because they are so durable (no big deal getting crushed inside a suitcase) and fold up to be so compact.

It's pretty amazing how widely used these headphones are in studios and broadcasting. You see them everywhere, and in many movies also.
A

I might get another pair of the V6's ... I have my modded removable cable set .. but I think I may get either another V6 or the MDR-CD900ST

GotNoRice said:
I still have a pair of MDR-V6 headphones (an authentic pair). They have held up great over the years, although I have switched over to using velour pads from the Beyerdynamic DT250, which are a direct fit. They are my go-to headphones for traveling because they are so durable (no big deal getting crushed inside a suitcase) and fold up to be so compact.

It's pretty amazing how widely used these headphones are in studios and broadcasting. You see them everywhere, and in many movies also.
Click to expand...

On the TV/film sets I've been on (quite a few), I haven't actually seen a single MDR-V6 (so, maybe not so common anymore), but I do see a TON of MDR-7506 ... to the point where I'm surprised if I don't see one (or more) being used during the shoots.

Side note: there's also this little gray headphone I see lots of the PAs (Production Assistants) using on set (looks super cheap and flimsy); haven't gotten a good enough look to see what it is, though.
You must log in or register to reply here.
Share:
Reddit Pinterest Tumblr WhatsApp Email Share Link
Top