I have 9 Corsair SP120 rgb fans. They are hooked up as follows.

Suddenly one day, all the fans have simultaneously started to randomly flicker, not completely on and off but with a slight pulsing dimming effect, just enough to notice it, almost like power isn't staying constant. It is set to static color, made sure it wasn't some weird effect selected.

I have moved everything off that sata power cable (2 SSD's)

I have given the two led controllers they're own new sata power cables.

I did read that disabling Windows 10 Fast Boot solves a lot of these problems, and it did for a few hours ( was happy ) but it started again.

I have zero signs of a bad psu, multiple stress tests with both cpu and gpu combined. Voltages never go below their ratings.

Both led controllers are from older cases, the 460x and the 570x.

I have tried both LINK 4 and iCue. I have exhausted all trouble shooting methods I could find online.

My main issue is I can't trace it back to a bad usb device, since all 9 of them are doing it together, and they're spread across 2 brand new commanders, and their own led controller unit. Even so, the led power and effect signal comes from the led controller unit

I'm at a loss, I've resorted to turning off the leds.

Any ideas or help would be appreciated very much.
F

try updating the firmware on all the devices and then reinstall the iCUE software.

Also, try using both channels on one of the commander pro's for the fans leds.

You can go to the Lighting Hardware setup and make all the fans a static solid color and then unplug the USB header on the commander pro, this should eliminate any software issue from the PC causing the issue. 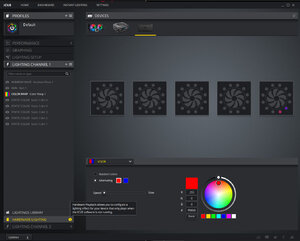 All the firmware is up to date. I will try saving my static color to everything and unhooking my commanders and see what happens. Thank you for that idea.
You must log in or register to reply here.
Share:
Reddit Pinterest Tumblr WhatsApp Email Share Link
Top