mine broke with only web browsing office type work and not 1 game played with it and seems all are failing at a alarming rate still in warranty.

im done with this company buzzing psu buggy firmware updates and now this is the last straw. 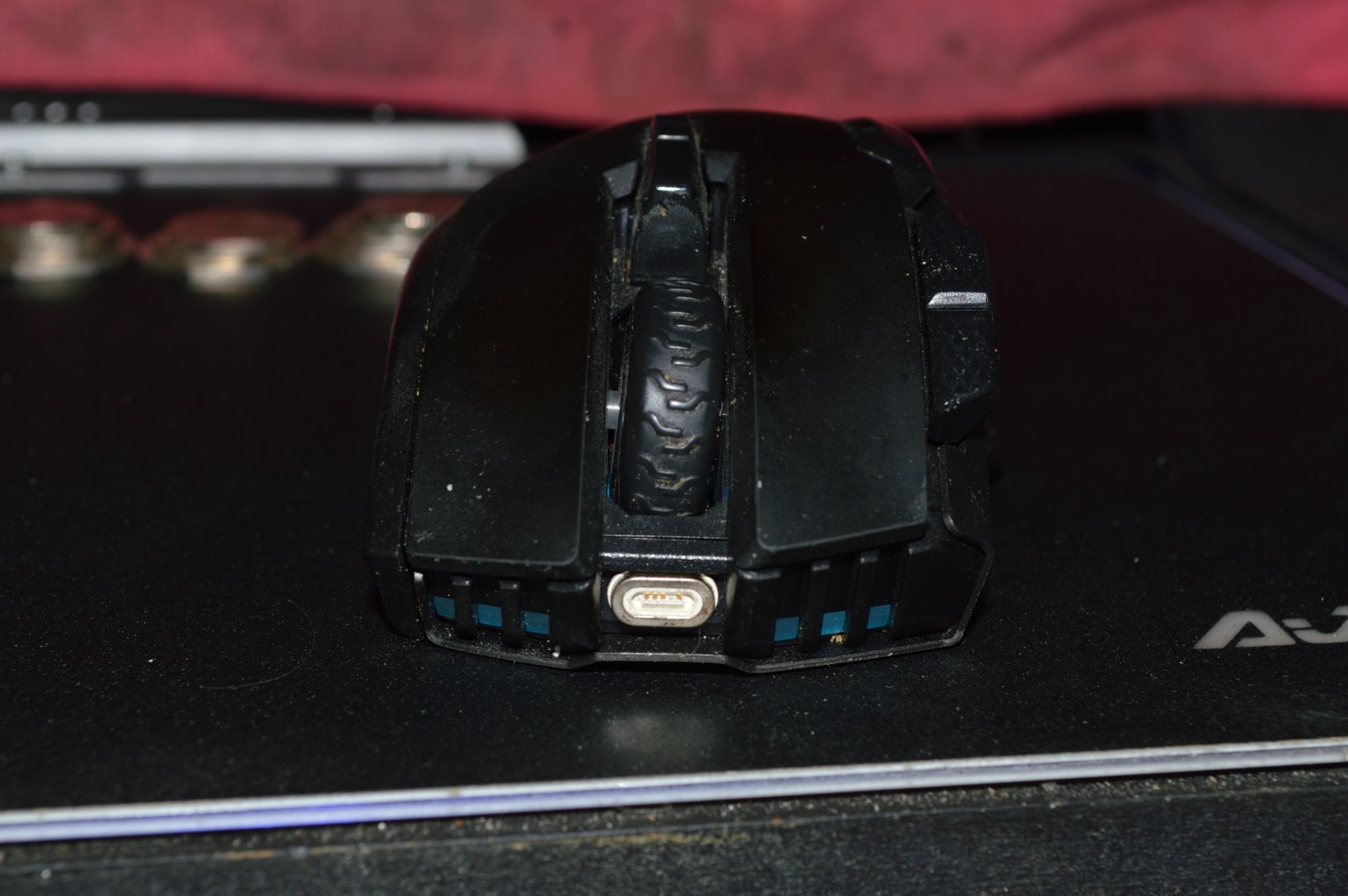 I've had several mice in the last 20+ years of all brands, none has ever looked that filthy, nor one has ever broken from use and I also don't play games, heck even my XBOX controllers don't look dirty.
J

lol not much point cleaning it now tho had to replace the micro switch on my old razor mouse but that lasted 6 years b4 it started double clicking and had to be replaced, it still works fine.

and this mouse is also doing this as well and not long after the wheel has broken just over a year old.
D

Well, not dragging your mouse through a used litter box is the first step in making sure your mice last.
J

People... It's an extreme closeup of a mouse that has a little normal-use dust on it. Give me a flippin' break with the "Oh, it's DISGUSTINGLY FILTHY! That must be why it broke." bullshit.

As far as Corsair products are concerned, my experience has been that they make what are otherwise excellent products with usually one weird (usually cut-corner) "WTF??" flaw in them. Examples:

1) Void Pro wired headset where after a month of standard use (with standard use being defined as NOT throwing it around, wrenching on it, sitting on it, dropping it, or other forms of physical punishment that one would logically try to use to explain such problems), the mic stopped working and after a few months of use, the rubberized plastic microphone simply broke off. I had a working mic on my webcam, so I worked around the non-functioning mic, and just snipped the mic on the headset off when I got tired of it dangling by my chin. The actual headset functions just fine and still sounds great. I tried to RMA it when the mic stopped working, but Corsair advised me that it would take them a while to replace it due to stock shortages at the time and since I had a working mic and a need for working headset speakers, I ultimately never bothered. (Personally Experienced)

2) K70 RGB (the original RGB release with the 2 USB plugs -- in case you didn't have a USB 3.0 plug wherein you could use 2 USB 2.0 ports to support the power draw of the lighting) where the cable breaks internally near where it goes into the keyboard if you move it frequently. I use my keyboard in my lap while leaning back in my chair. (Personally experienced TWICE, with the second time being out of warranty; keyboard is still usable by taping the cable so it bends to the right all of the time - works fine, is ugly as sin). Consequently despite the cable being relatively easy to replace for an enthusiast, Corsair will NOT sell you a new cable. This problem is common enough that I have found a web page where someone hacked in a USB-C port onto the back of the keyboard so they can use a regular USB-A to USB-C or USB-C to USB-C cable instead (making the cable easily swappable should any future issues arise as well).

3a) M65 Mouse where the mouse wheel is difficult to use because using it causes it to randomly scroll in whichever direction it happens to feel like at the moment. Never found a fix for this, and it never bothered me enough to RMA it. (Personally experienced)

3b) Same M65 Mouse, where after 3 years of standard desk use, the left mouse button just stopped working because there is a little plastic bit on a hinge under the button that happens to press down onto the switch deep in the mouse, and that bit picked that moment to just... fall off into the mouse. The fix was to disassemble the mouse and reconnect the plastic bit. (Personally experienced)

4) Commander Pro firmware was really buggy with fan control early on, causing it to randomly turn off your system fans - thankfully, this has been fixed for a while now but it took several months and numerous firmware revisions (Personally experienced)

5) iCue software problems have been legendary over it's release cycle - It has thankfully been much more stable this past year. (Personally experienced)

6) Corsair HD 120 RGB fan where one-and-only-one of the LEDs in it decided it was going to go off-script and do whatever it wants despite it's settings in iCue. Any fans chained behind it on the Corsair RGB fan hub have ALL of their LEDs act just like that one wonky LED - fix was to move the fan with the wonky light to position 6 on the hub. I can't really RMA this fan, because I would have to completely disassemble my wife's loop to get to it and it just isn't worth the effort. (Personally experienced)

7) My son's wireless Corsair Void Pro wireless headset dongle is so flimsy that he broke the plastic housing on it by regularly unplugging it when he was done with it (front USB port on the computer, did not want it to get accidentally hit and broken). A little tape, and just leaving the dongle connected to a short USB extension cable that allows it to be plugged into a rear USB port on the computer and still sit on his desk under his monitor was the fix for this. (Personally experienced)

8) The Corsair nVidia RTX 2000-series water blocks whereby putting a bit of pressure on the connector plane will cause it to squirt into your computer... Because they opted not to have a third screw in the middle to properly support the connector plane. (saw several videos on this, have not personally experienced)


My wife and I have recently each upgraded to the new Corsair Virtuoso SE Wireless 7.1 headsets (the "Espresso" ones seem to be less popular for some reason, and have been on sale for less than the non-SE Virtuoso headsets via Best Buy and Amazon lately). Personally, the Virtuoso Espressos look fantastic and so far I can find nothing faulty with either set after a couple of months of use. EVERYTHING on this headset seems to be well thought out and of quality manufacture, including the keyed aluminum removable bendy mic on it.

Now one might say... "But MVMiller12, if Corsair products are so flipping bad, why do you keep buying their shit? Doesn't that make you either a hypocrite or a lunatic?"

Well, maybe it does, but with that being said, though - with the exception of that (generally only) one major flaw on each product, they have been excellent products. And once you know the work-around or fix for the flaw, what remains is STILL an excellent product. I love my K70 RGB keyboard with Cherry MX Browns. It is the 2nd best keyboard I have ever owned, just behind my IBM Model M from back in the day, and a complete joy to type on. That M65 mouse is the most comfortable mouse I have found for my huge hammy hands. The Commander Pros allow for easy centralized control for each of my watercooled systems as well as providing a one-stop shop for controlling the lighting on everything (because, sometimes less is more in the RGB department, and sometimes MORE is more as well - good to have the choice). The wired Corsair Void Pro headset served my wife very well until she needed a better mic for her schoolwork (since the webcam mic was picking up everything going on in the house around her). My son ADORES his Wireless Void Pro and treats it like it is made of gold. In the case of the Virtuoso headsets, we tried several different makes and models before my wife settled on her pair, and for the money they were the best purchase available at the time. After a month or so of her using them nearly every day for school and gaming, I bought myself the same set.
J

i have the k70 rgb kbd and never had a problem with it tho i never move it as sat on my desk and best kbd i have had, also the mouse is the best that fits my hand but not long after i got it i had to turn it on and off for months after a firmware update where the dpi would go to slowest speed its fixed now tho but drove me insane as could be every few hrs or every 5 mins at random.

i also got a psu it worked fine but the coil wine was driving me up the wall so had to rma it.

had to send that back and get one of these

so i could then send back the corsair one and got this that will be for my thread ripper build when i can get a 3090.