We recently chopped up a 2 post telecom rack to turn it into a sorta ghetto 4 post rack for my rackmount servers, ups and switch / cable internet gear. I was going to buy a skeletek rack, but didn't feel like spending $260

There has been an addition in progress on the house for some time now since we are paying out of pocket, so progress is slow. Anyways, upstairs over the garage I had all the network drops run under the last small set of stairs, so there is a small cubby under there with two 20a circuits and a light.

I forgot to get some before pics, but you guys know what it looks like.. standard 2 post telecom rack. Here's after we disassembled it, and started chopping it and the angle iron up a bit on the portable bandsaw: 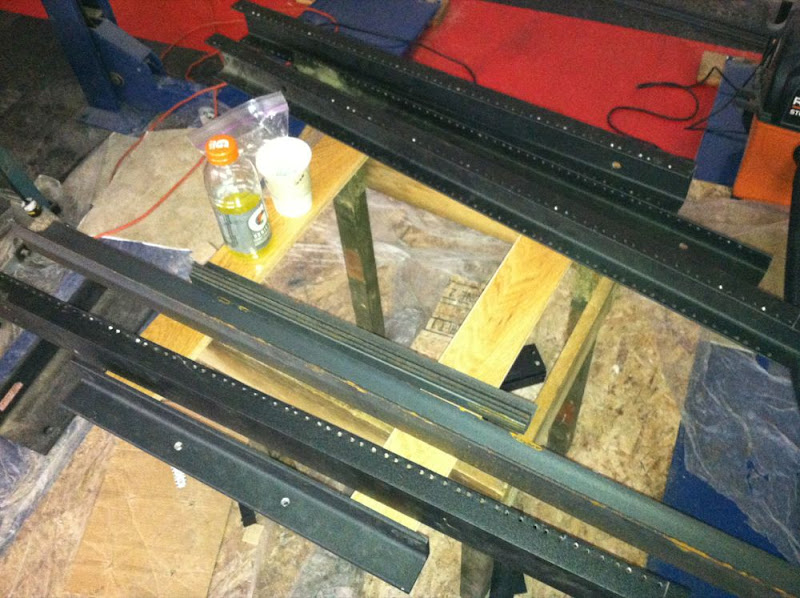 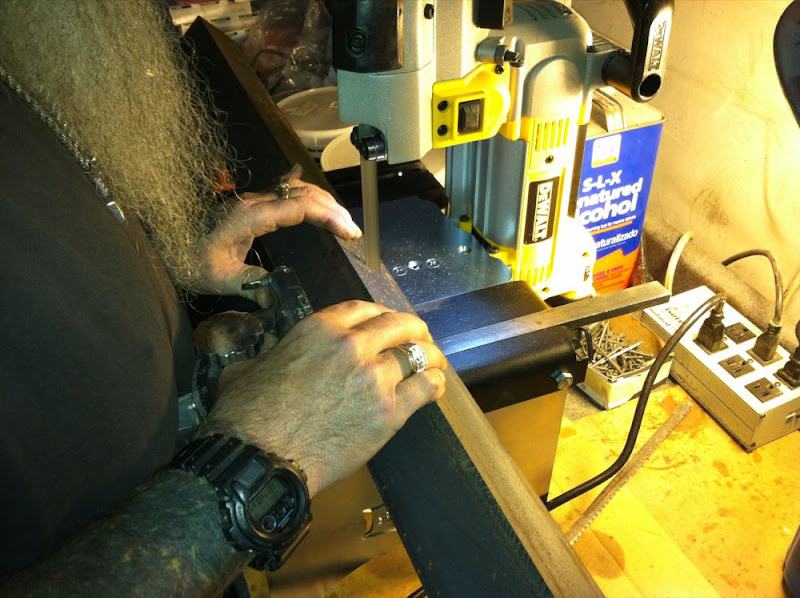 Chopped the 2.5" angle iron and put some 275lb straight casters on from harbor freight. just laying on the side to check height of the wheels Sides drilled and bolted to the angle iron with the wheels: 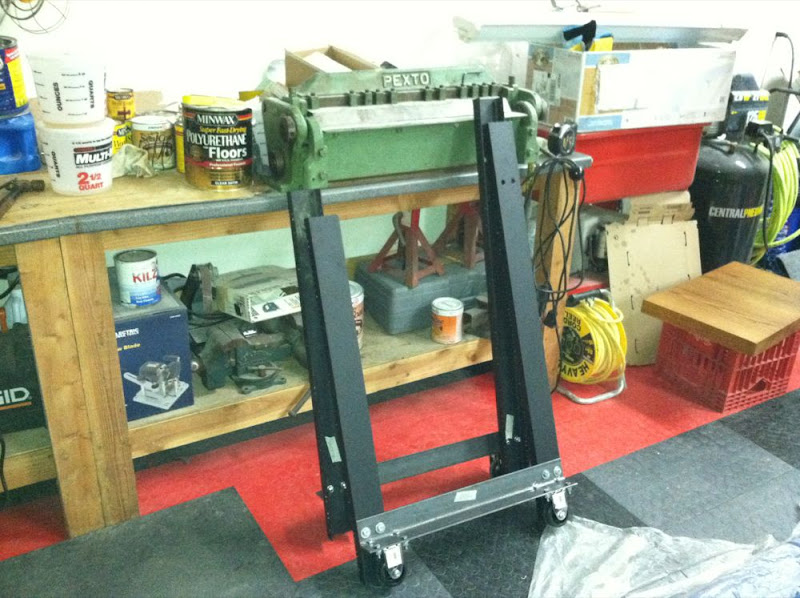 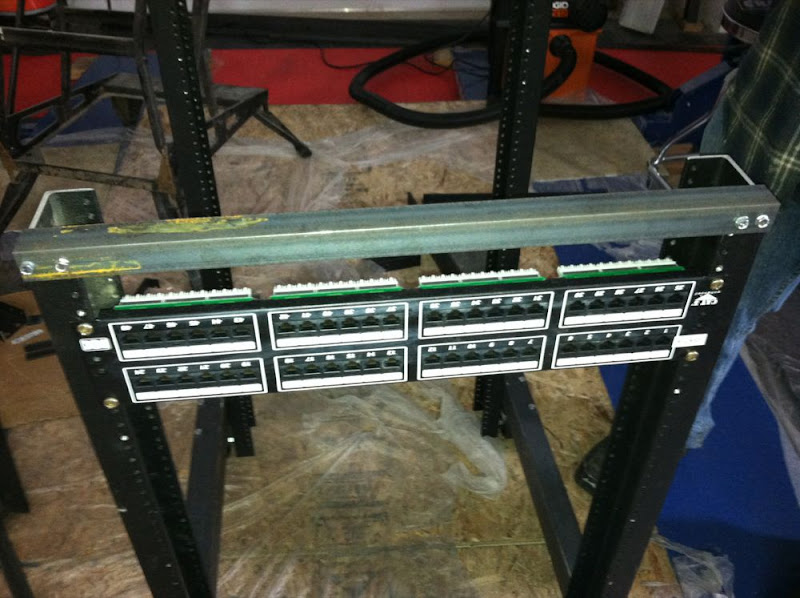 Here it is all slapped together 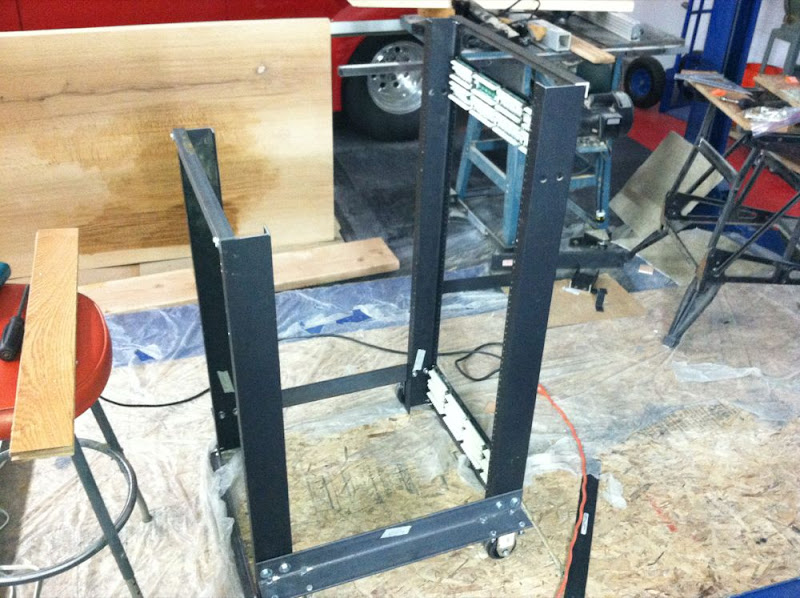 Before I loaded all my crap in there, just to show where it's going under the stairs (which aren't done.. just plywood tops for now lol) 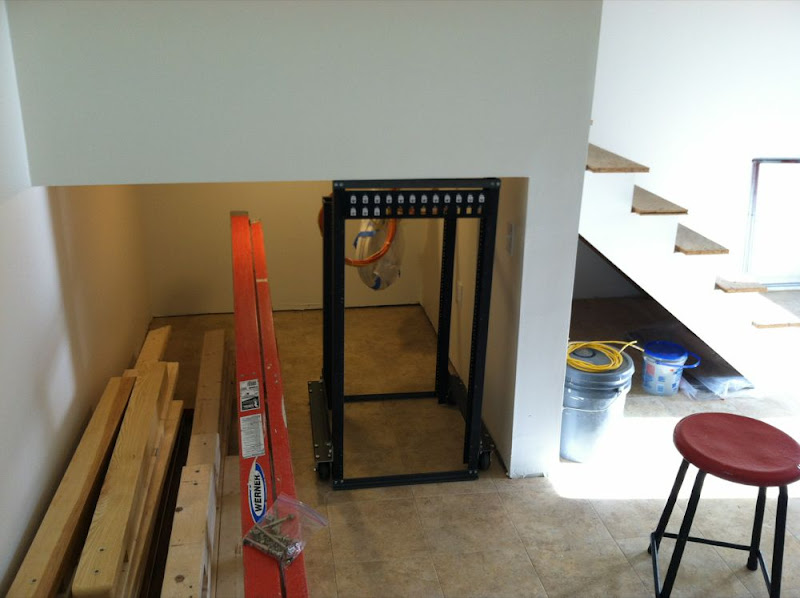 Ok now with it loaded up with my crap 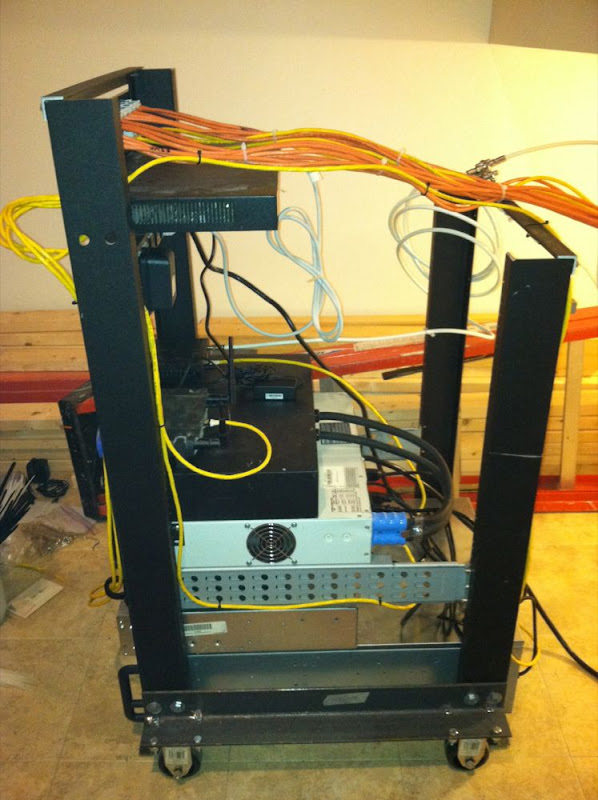 I had to spin the ups rails upside down since when I set the distance between the poles, I just eyeballed it with a few patch panels instead of measuring.. well, the servers and everything fit fine, but I'm about 3/16" too narrow to fit the ups with the ups rails. Oh well. I just flipped them over, and stuck my supermicro mini itx server inbetween them. Problem solved. 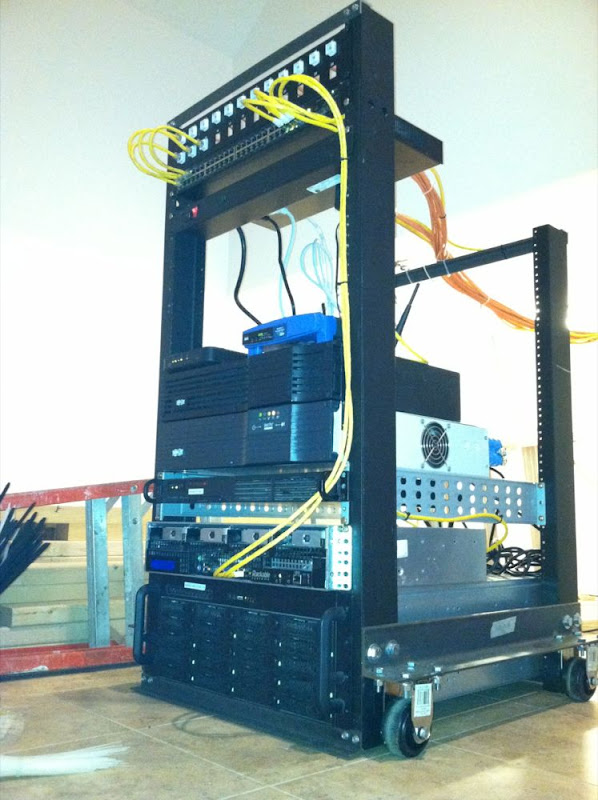 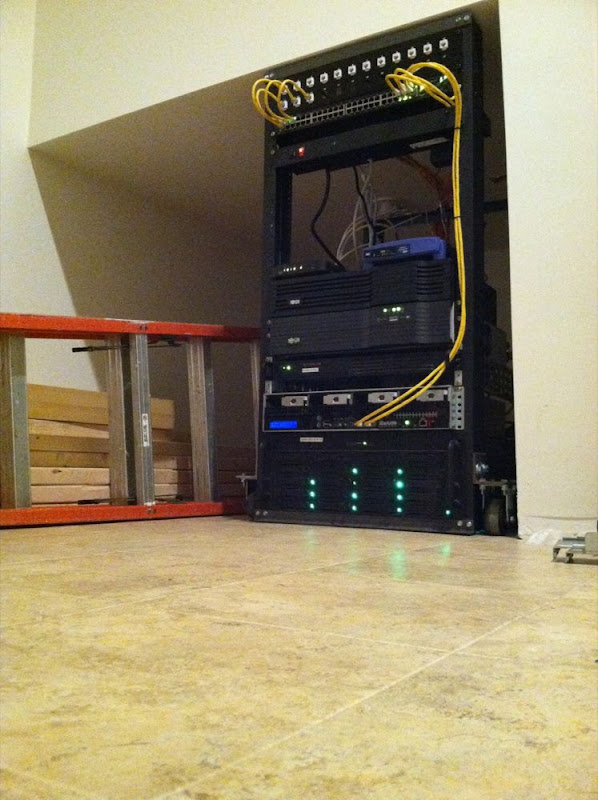 Only using 3 network drops right now in the old part of the house. All the others are double drops to the new addition.

I've got a big fileserver at the bottom running FreeBSD 8.2 for ZFS. Its got ~13.5tb in two ZFS arrays to store movies and tv shows, plus misc random data.

The server above it is a rackable systems server with dual Xeon E5420's with 12mb cache and 16gb ram, running Linux and Plex media server. It doesnt have much for disk space, basically just a cpu box to do transcoding for our Roku, ATV2, and the Atom ION machine that I have downstairs hooked to the projector.

Then tucked inside the upside down ups rails is my Supermicro Intel Atom 330 mini server that runs pFsense for my firewall.

Above that is a tripp lite smart2200rmxl2u ups with an extended run battery cabinet on top of it.

Then I have a cisco cable modem (100mbit package), and an old Linksys wifi router running Tomato firmware. That is getting replaced in a few days when my Ubiquiti Unifi AP shows up in the mail.

Then there's a 15a rack mounted surge strip, a Dell 2748 gigabit switch, and then a keystone patch panel. All cat6 wiring. I may swap the network drops over to one of the two real cat5e patch panels that I have since I find that one a bit ugly. I had picked that up so that I could have rg6 and cat6 drops right to the panel (had 4 satellite drops), so that I could patch in the rg6 to wherever I needed it to go. Since then, I've dropped the satellite, so I have all the wires in the cubby there, but don't really need them, or the keystone patch panel at this point.

Anyways, I've got about $45 into the rack for materials. The rack itself was free
M

Pretty neat job ! If I understand correctly the rack is directly on the basement floor ? Depending on where you live, watch out for the floods.

I didnt know that ZZTOP was into servers.
D

Metraon said:
Pretty neat job ! If I understand correctly the rack is directly on the basement floor ? Depending on where you live, watch out for the floods.

I didnt know that ZZTOP was into servers.
Click to expand...

Oh, no, it's upstairs in a breezeway between the old part of the house and the new part of the house. It's about 14 feet off the ground. The stairs there are to get up into the loft above the garage. 13ft ceilings down there, so there had to be two sets of stairs to not end up wasting that whole room

lol, that's my dad, although my beard is almost as big
U

Sounds just like me. My dad looks the same is a machinist as well . Looks good. I took a 24u 2 post wall mount rack and took just the front rails and got my dad to build out a square frame for it. I then used plywood that sits on the angle iron that makes up the frame. I have pictures of it in the networking pictures thread.
A

looks good! I did the same recently.
R

Love it. Custom, compact, and portable.