Can you get half RTX3080 performance for half the price? Asus TUF RTX 3060 review

Hello everyone and welcome to another review. So just like everyone else has been doing, I will do a brief review on the RTX3060. 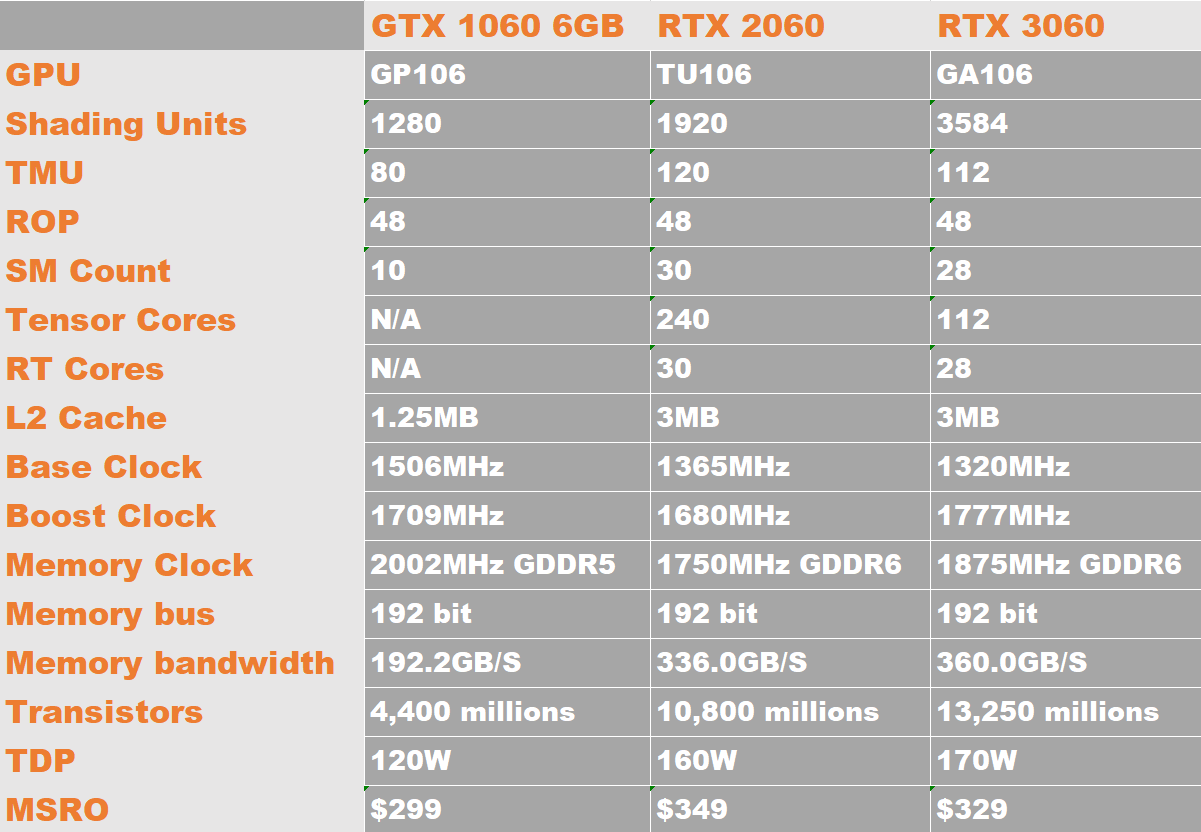 Price wise, thanks to the mining hype, you can even make money in some cases by selling your two or three years old graphics card, which is so ironic. The GTX1060 has a MSRP of $249, the RTR 2060 has a MSRP of $349. However you are welcomed to check on eBay to see how much they goes for right now.

The RTX 3060 carries a price tag of $329, however not a single card is release at that price point. You will be spending an average of $450+tax for an AIB model RTX3060, of course that’s given you can grab one at MSRP. You might end up spending double that money if you are shopping on eBay. 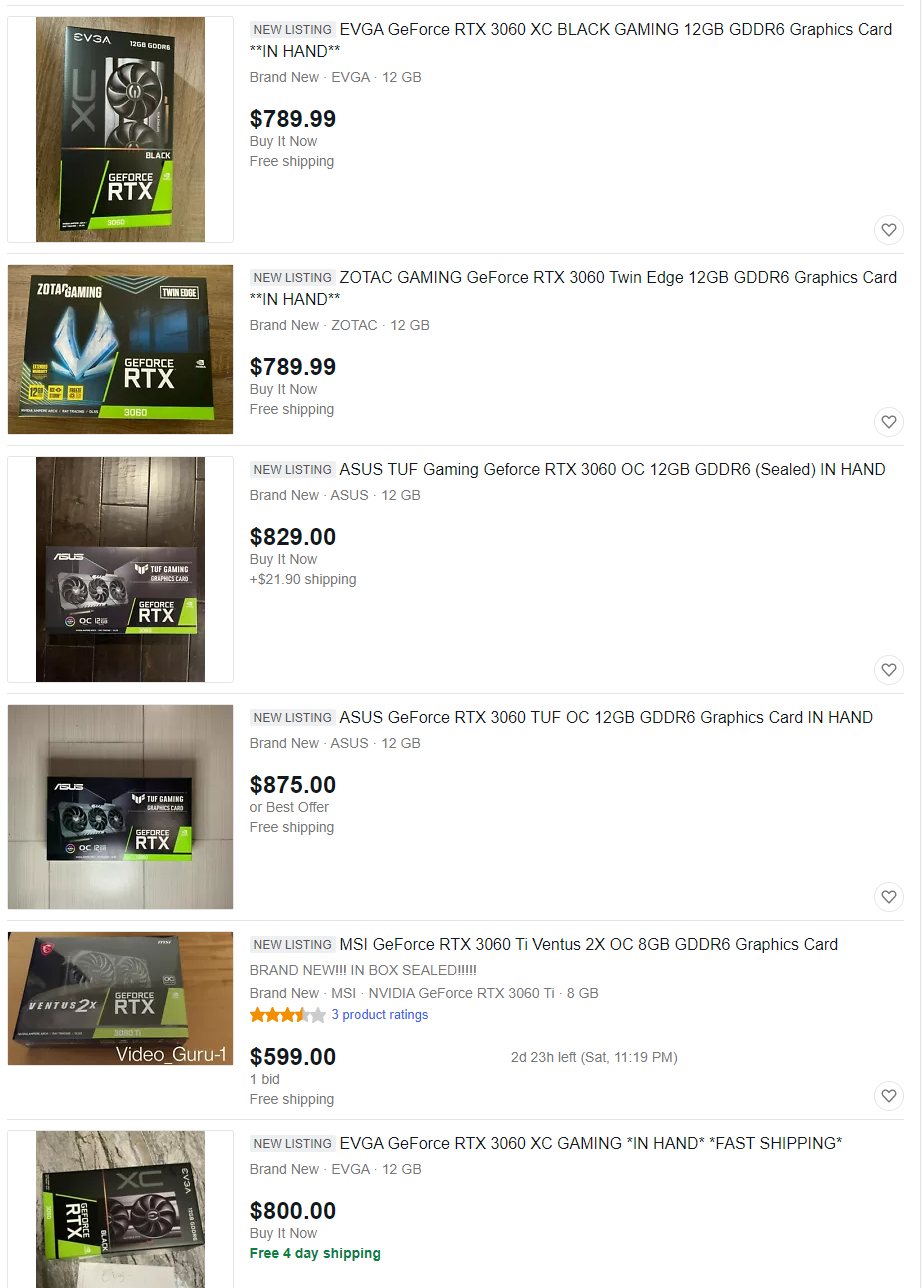 The RTX 3060 uses GA106 die, it is the smallest die so far in the Ampere family. It supports all the new feature and second generation RT core that’s brought by the new architecture. It has a TDP of 170W, and you can increase the power limit by up to 15% depends on which model you are getting. So only one 8pin power connector is present on the board. 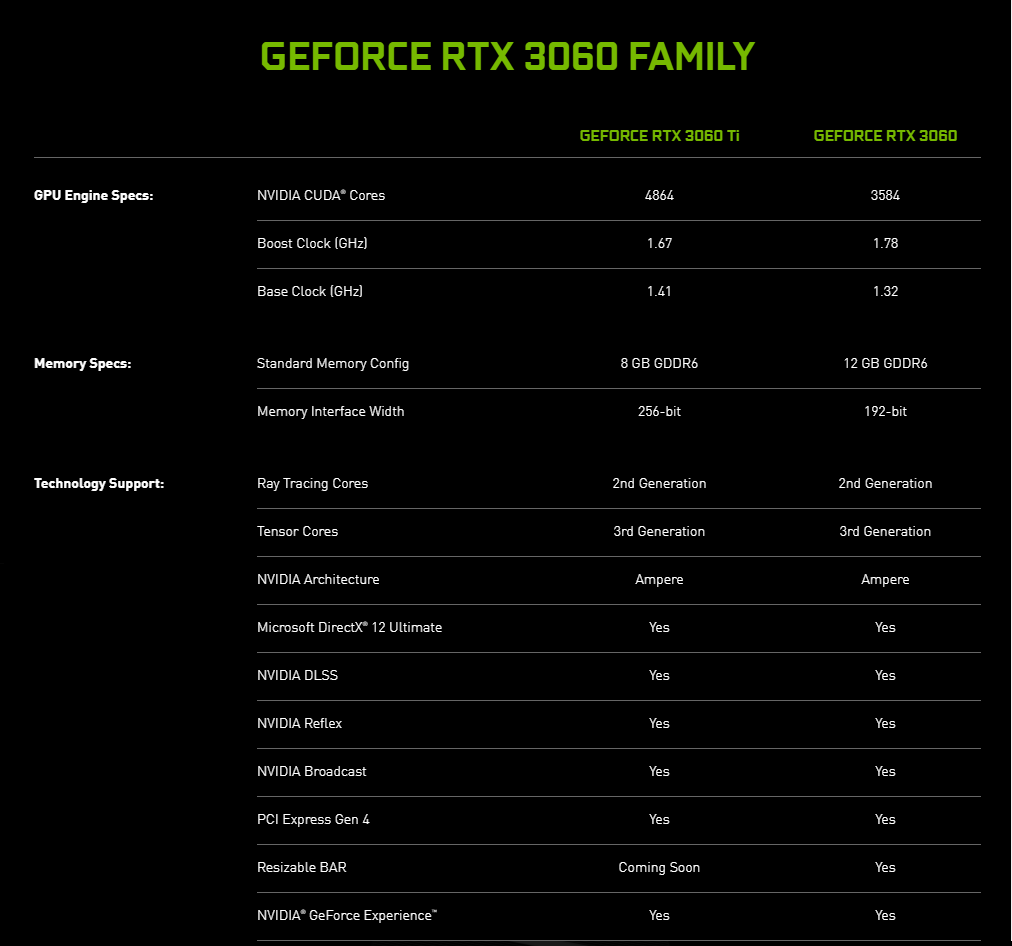 In this review we will be looking at the Asus TUF RTX3060. It is one of the more expensive model and it’s priced at $489. To be honest this is definitely a bad value considering it’s performance. And it’s a horrible value if you are getting it for $800 on eBay. 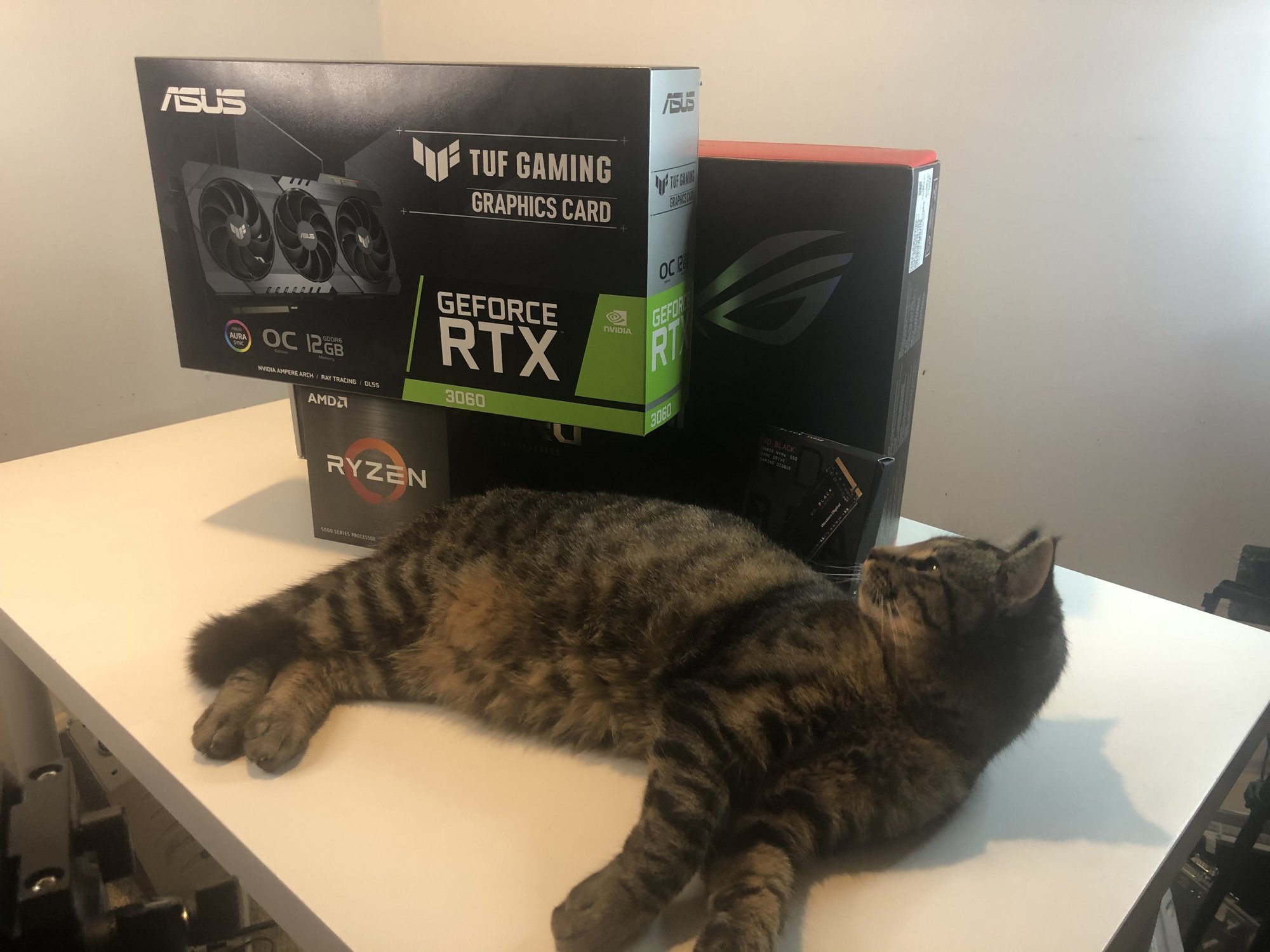 The cooler design it similar to the TUF 3070 and TUF 3080. And in our review we found out it’s definitely an overkill for the small GA106 die. And RGB wise it’s also the same as it’s bigger brothers. The TUF logo on the back of the card will light up. 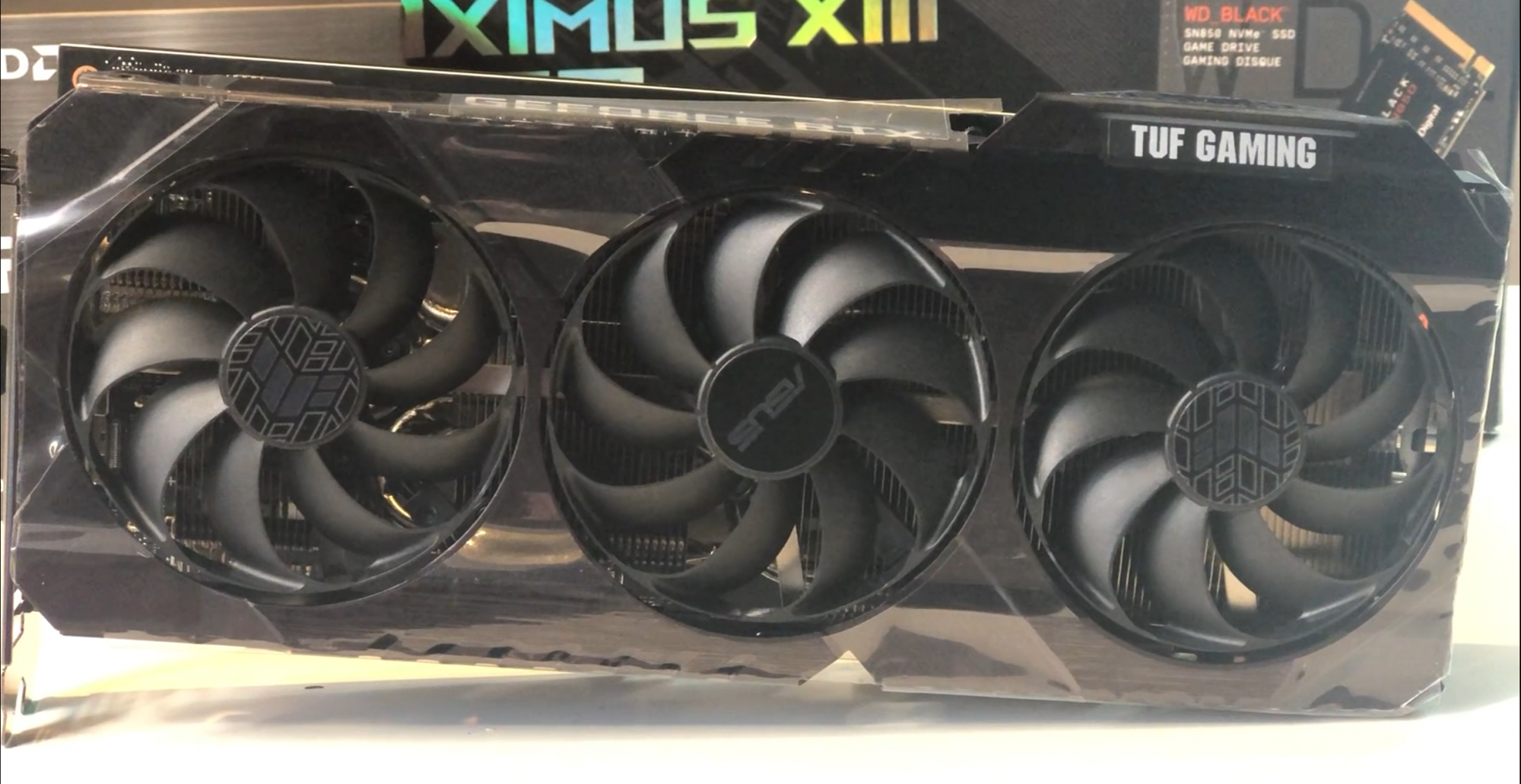 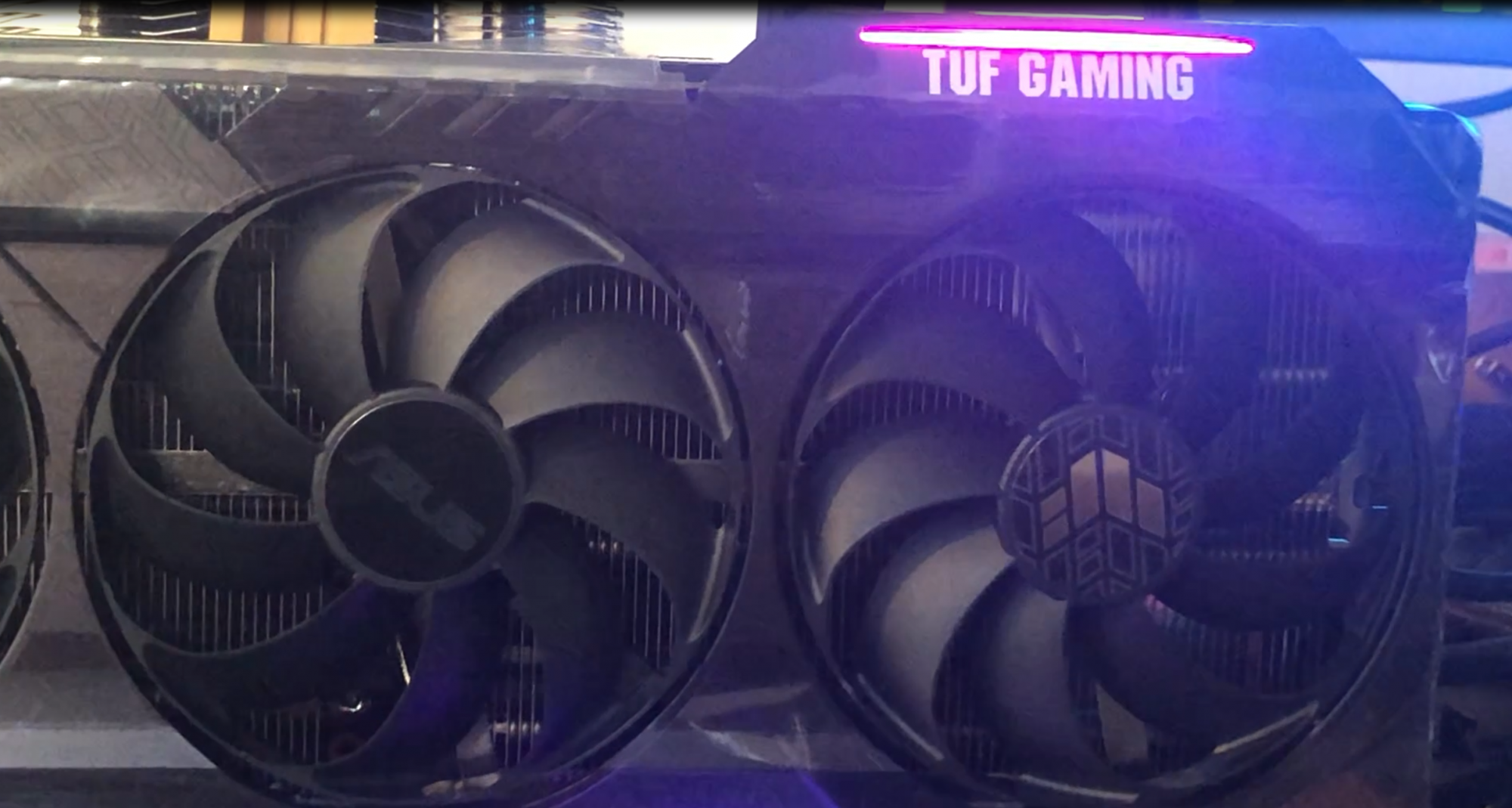 In this review we will be pairing it with the Rocket lake i7 11700 and Asus Maximum XIII Hero. We will be using two sticks of G skill DDR4 3200Mhz CL14 memories. And we are doing a different approach on this one. Just based on the MSRP, the RTX 3060 TUF is exactly half of the MSI RTX3080 Gaming X Trio. So for half the price, does it offer more than half of the performance? Let’s find out.

First let’s take a look at GPU-Z. The TUF has exactly the stock specs. Only with a slightly higher boost clock. Although being a lower end variant, it still supports PCI-E4.0 X16. It has 3584 Cuda cores instead of 4864 on the Ti variant. But this is actually not the complete GA106 core. The complete GA106 cores has 3840 cores and it’s all enabled on the mobile version. The desktop version however, disabled one group of compute unit. 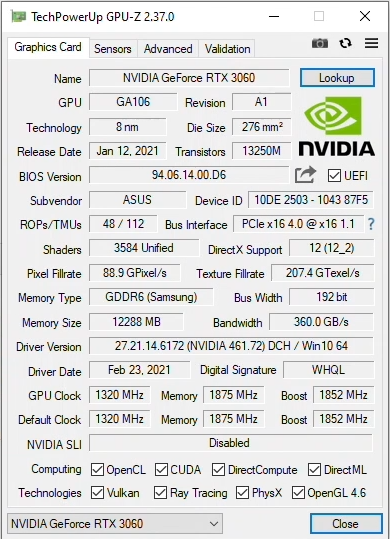 Spec wise it’s actually less than half of the RTX 3080. The the memory bandwidth is also much lower compares to RTX 3080. 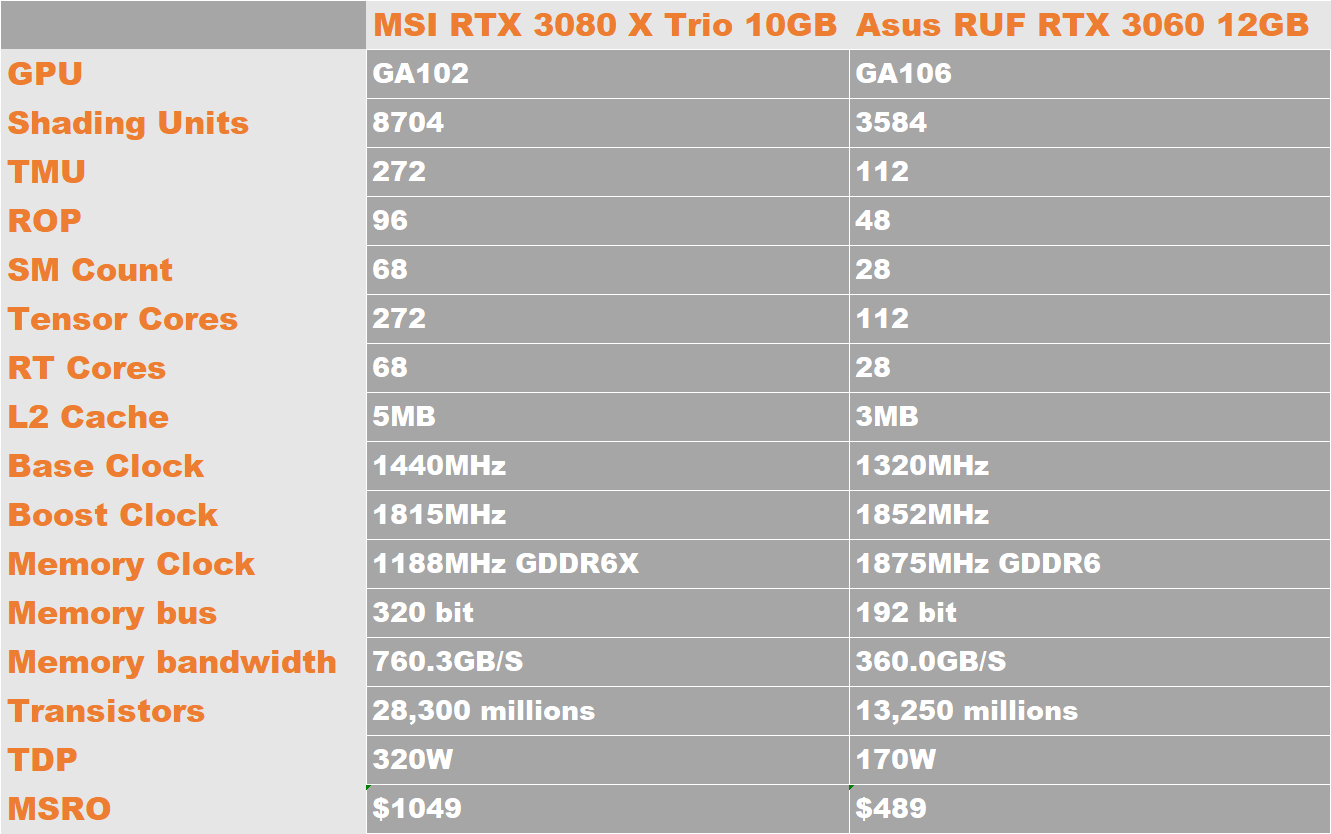 Let’s run some benchmarks and take a look at how it performs. First let’s start with 3DMark Timespy. As expected, we are getting roughly half of the performance on our RTX3060 compares to RTX3080. And it is almost a perfect 50%.

In Unigine Superposition. The trend continues. It is getting less than half of the FPS and overall score. Actually it’s getting similar scores to RTX2070 Stock cards.

In Unigine Heaven, it’s again less than half of the performance of RTX3080. Even an overclocked RTX2060 can get higher scores than this.

In unigine Vally, it’s actually getting less than half of the average FPS compares to RTX 3080. However the score is at roughly 75%.

In Horizon, it gets about 60% of the performance compares to our RTX3080.

In Shadow of the Tomb Raider, it’s still getting 50% or less performance compares to RTX 3080.

Lastly is the compute performance. It is getting about 55% performance. Which shows similar scaling in game tests.

Temperature wise, since it’s a much smaller die, it stays very cool. The fan is capped at 50% and it’s still whisper quiet. The highest temperature recorded is 60C and that’s with furmark. It is not a realistic representation of actual daily workload. In actual gaming, it stays below 55C in most of the times. And the fan only start spinning when the card gets over 45C. So overall it’s a very quiet card. I don’t notice much of a difference between fan noise and difference in temperature between quiet and performance BIOS. 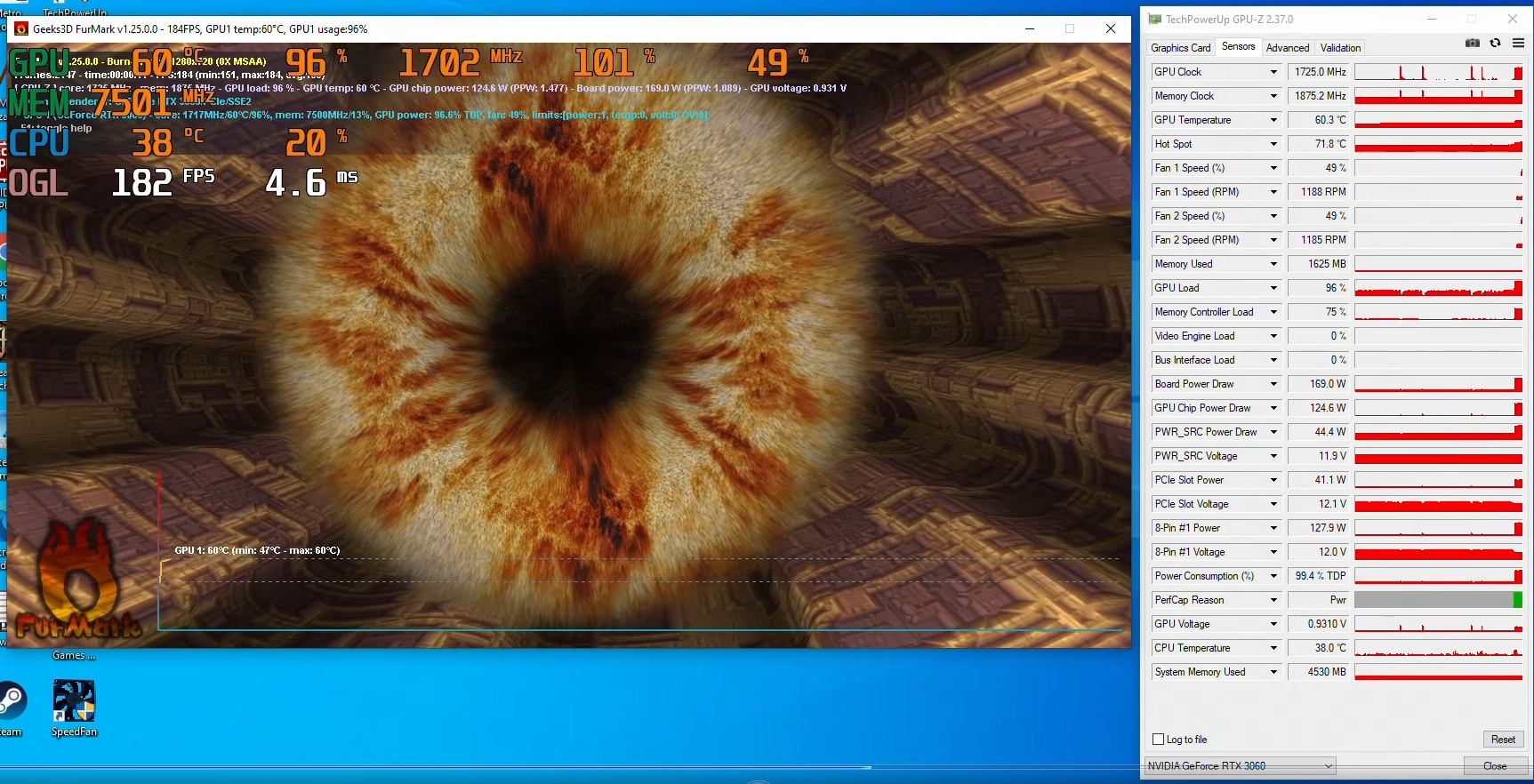 For overclocking. The TUF has 10% head room in terms of power limit. I only had couple hours with this card so I did not have time to fine tune the curve. But I was able to get an easy 220MHz overclock on the core. And we got close to 10% increase in performance. The 3Dmark Timespy score increases from 8084 to 8601. 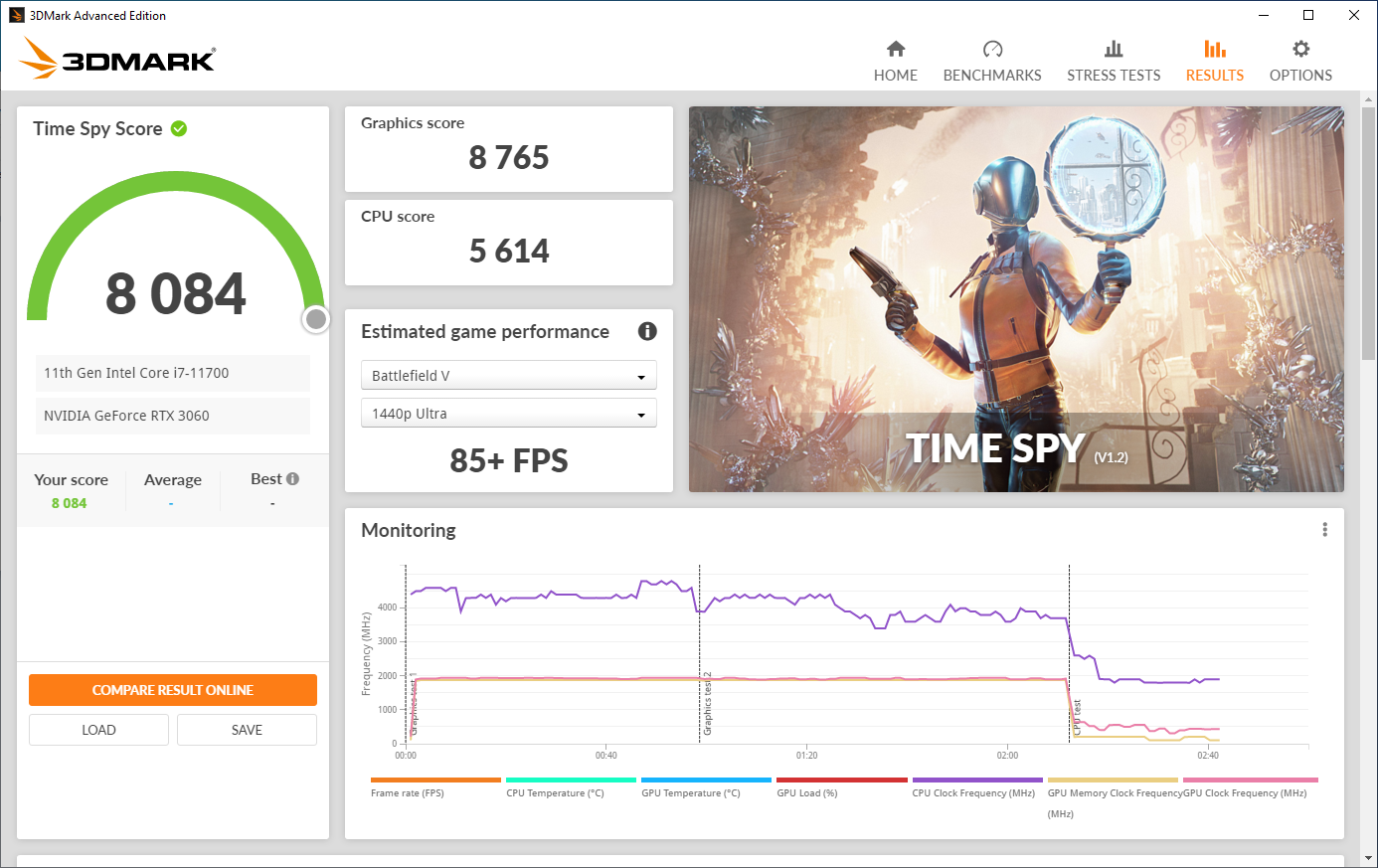 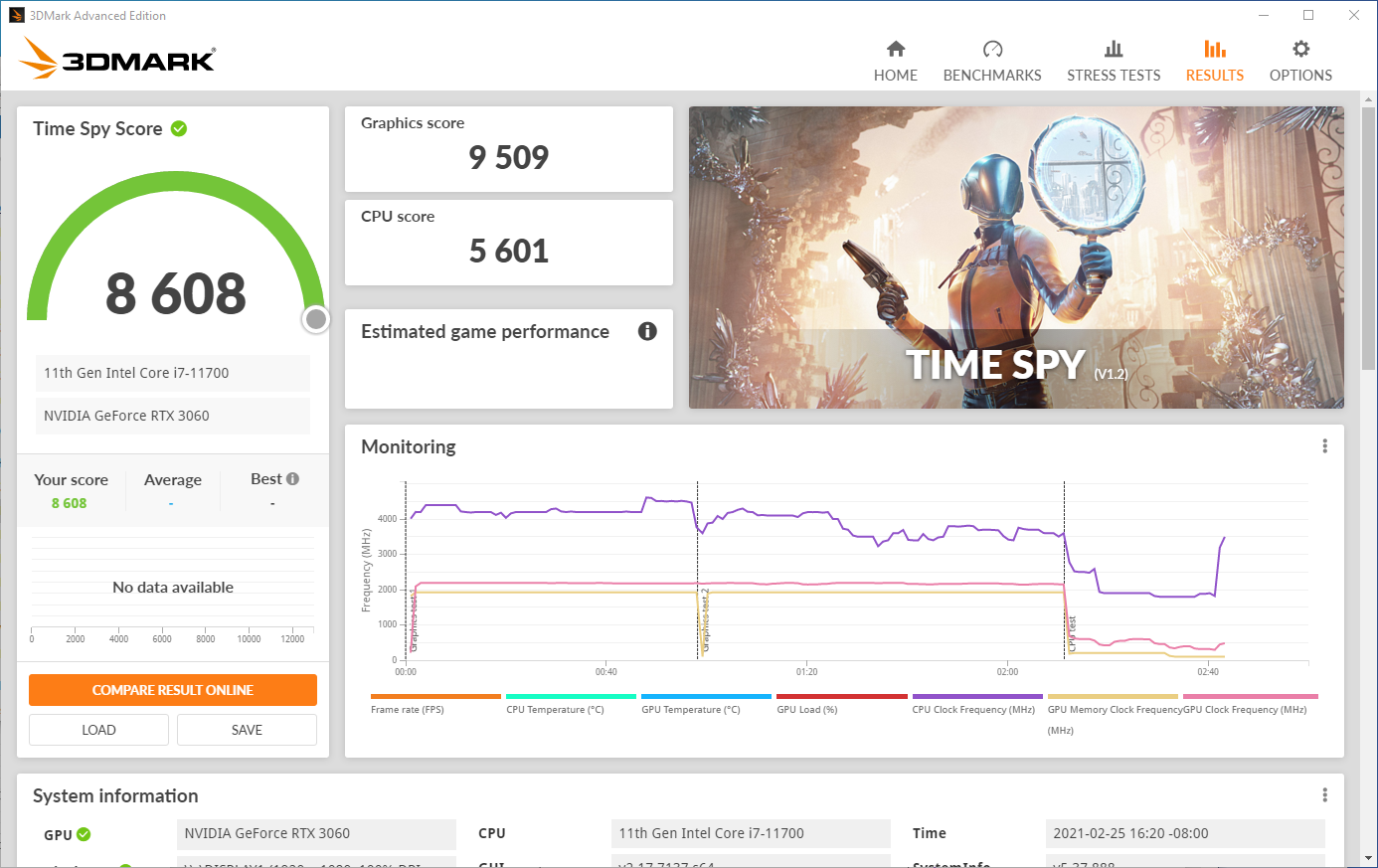 Lastly mining. I know I know many gamers hates miners because they contributes a lot to the crazy video card prices. So Nvidia claims that they have nerfed the mining performance on the RTX3060 so gamers will be able to get them. The answer is yes, and no. Yes Nvidia did actually limit the mining performance on this card. In our test it is only able to get about 21Mh per second in our Ethereum mining test, which is only half of what it’s capable of. However this is a firmware level limit and I already heard about people cracking the firmware to remove the limit. And in my opinion, the real reason Nvidia limit the performance on this card is because they want to sell their mining cards, which is coming soon. 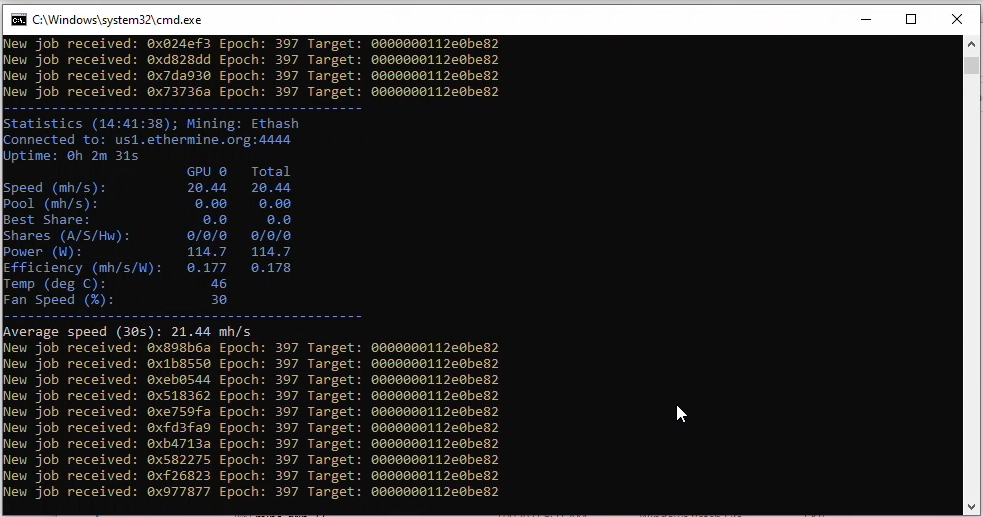 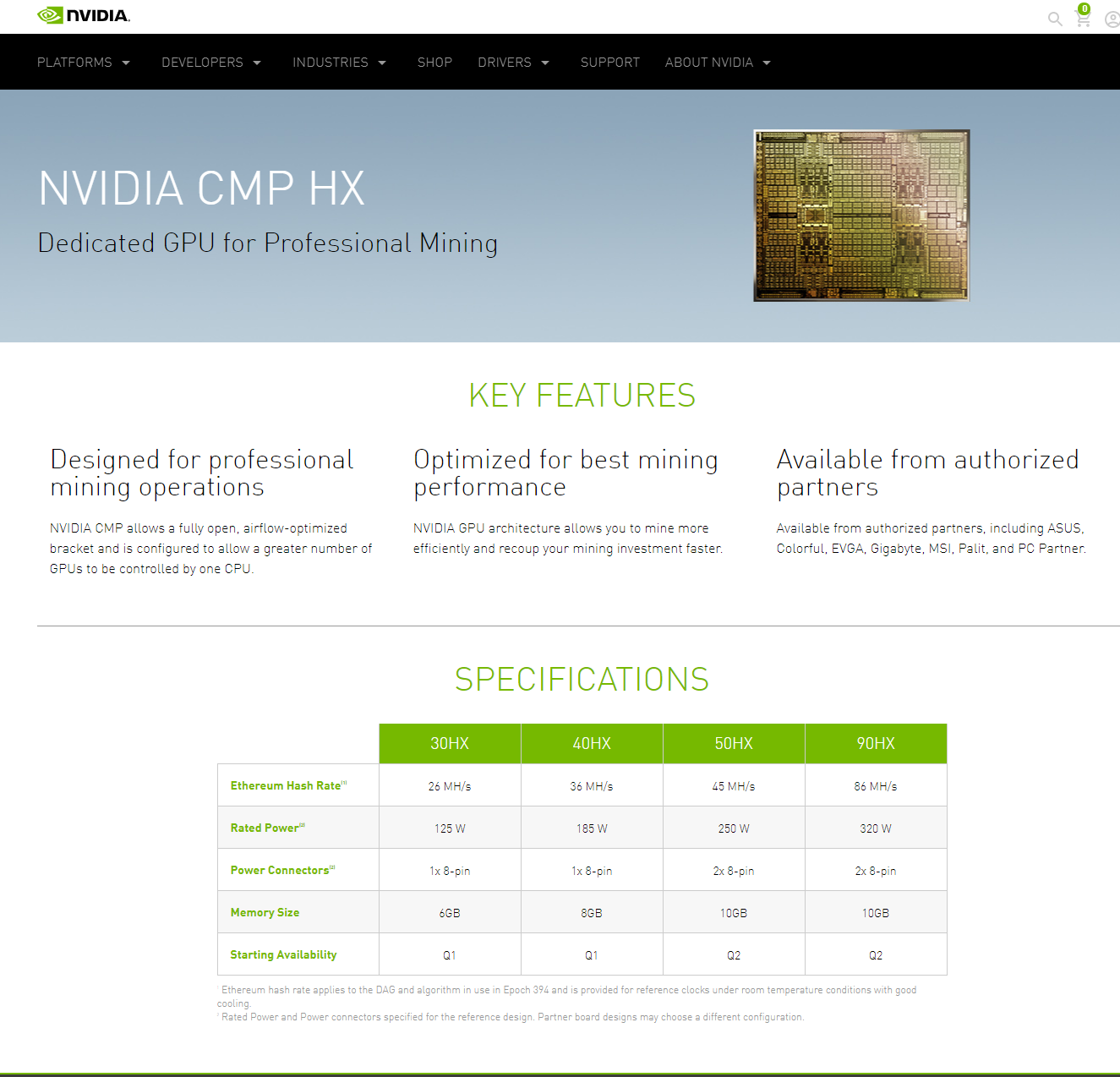 Just my opinion on mining. So I was one of the first miners in crypto currency. Actually I think I still have about 10 bitcoins but I lost my wallet years ago. It’s about half a million in value as of today’s bitcoin price, but am I mad? Actually no. I’m glad I got out of crypto mining. Don’t get me wrong, it is okay to mine as a business. By saying business I mean operating a mining farm on a larger scale. Because of my job, I get to know some miners that’s mining on a data center level of scale. It is treated as a real business. They have professionals to handle everything from purchasing, deploying, maintaining and decommissioning the equipment. It is more like the way to operate an actual cloud data center like AWS. They have very professional risk management and financial teams behind them. For individuals however, let’s be honest. The majority of people does not have the experience, or the actual knowledge that is required to operate an actual business, not to say a high risk business like this. They don’t have the proper purchasing channel, and they have no idea of the actual risk related with mining. Everyone thinks they can get an ROI in 100 days just based on the hardware cost and the current price of crypto. But it’s a lot more complicated than that, especially some miners are mining random cryptos that seems to have a really short ROI on paper. Let’s face it, with the pandemic right now, most people cannot afford to throw couple grants, or even more into water if anything goes wrong. If you talked to individual miners about the risk, they will tell you they have everything under calculation. But that answer simply tells you they have no idea of the risk involved. If you are familiar with the financial world, even Warren Buffett can’t tell you there is very little risk involved just because he has done his math and research. There are too many factors involved and there is no way one human being can draw a conclusion like that. Not to say, unlike Buffett, most miners cannot afford the lost if anything goes south. So mining with your spare card or PC? That’s fine. But if you are spending $1000 buying RTX 3070 on eBay hoping you can make money on mining, please, forget it. 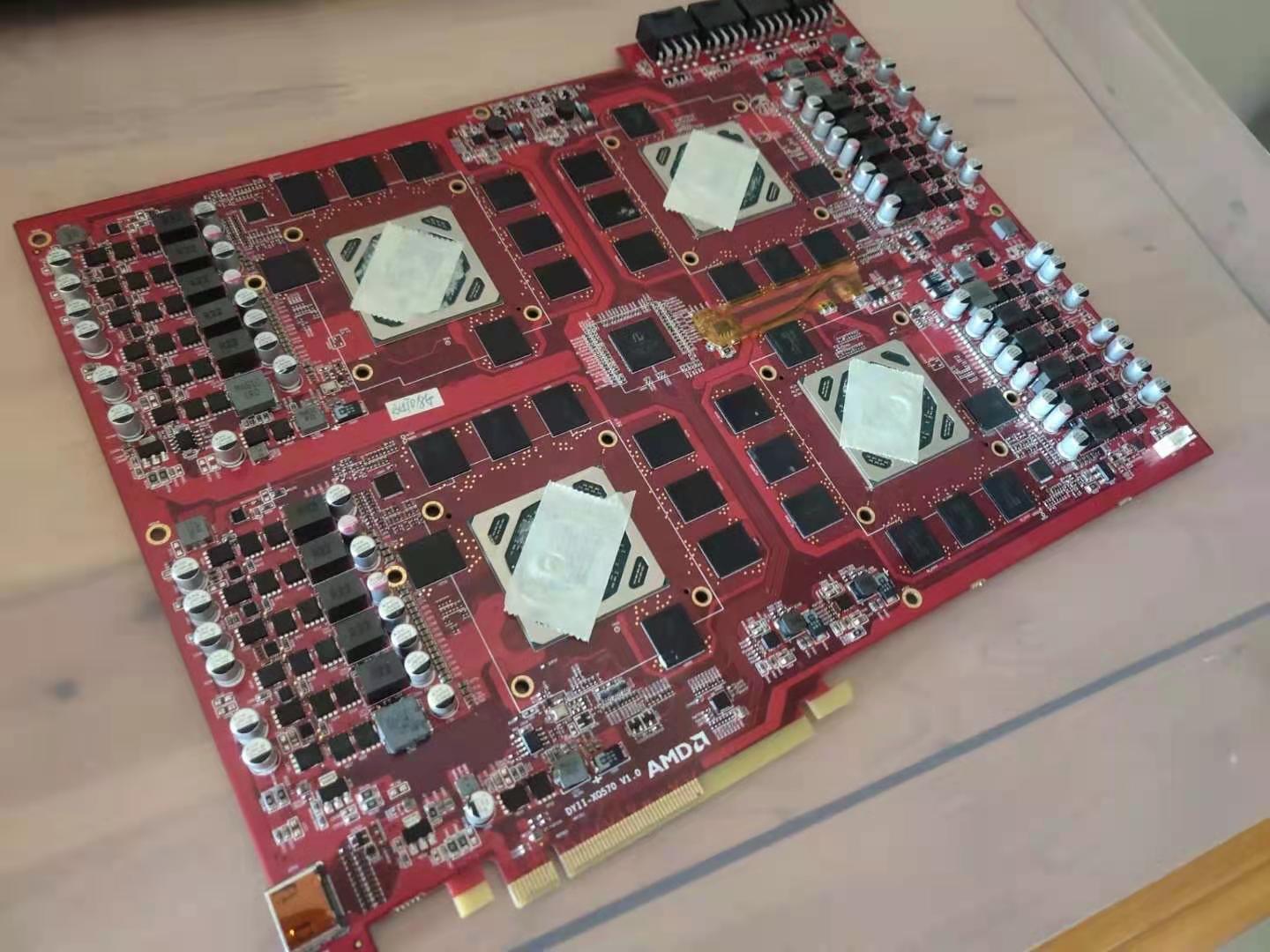 So should you buy a RTX3060? I guess it doesn’t matter because you won’t be able to get one anyways. But even if you can get one at MSRP, I would still say the current MSRP is way too high for a card with this kind of performance. Unless you absolutely need a card right now, I would say just wait and see.

You can watch a video version of this review here:

thanks for sharing! I gotta ask tho...
whAt

KATEKATEKATE said:
thanks for sharing! I gotta ask tho...
whAt

Looks like a custom mining GPU board with four 7970-era GPUs and a PLX bridge.
D

Nice review btw! Also keep in mind they only nerfed eth mining. While right now, it is most profitable, it likely won't be for long after EIP-1559.
R

cagoblex said:
But if you are spending $1000 buying RTX 3070 on eBay hoping you can make money on mining, please, forget it.
Click to expand...

Also, yeah I have some mined bitcoins forever lost from almost 10yrs ago...
I

I almost feel bad having a 3000 series card when I’m not playing games and people are struggling to get them.
S

Iratus said:
I almost feel bad having a 3000 series card when I’m not playing games and people are struggling to get them.
Click to expand...

Same. I don't think I had time to launch a game in weeks.
C

Sir Psycho said:
Same. I don't think I had time to launch a game in weeks.
Click to expand...

Me too. I have way too many 30 series card sitting here. I just sell it to my friends who needs them. But honestly my 3080 is just sitting in my PC doing nothing...
A

Nice review btw! Also keep in mind they only nerfed eth mining. While right now, it is most profitable, it likely won't be for long after EIP-1559.
Click to expand...

Looks line nVidia "accidentally" uploaded drivers to their website that unlock the mining potential. All you need are updated drivers and a dummy HDMI plug apparently.
C

Nice review btw! Also keep in mind they only nerfed eth mining. While right now, it is most profitable, it likely won't be for long after EIP-1559.
Click to expand...