First of all I say HI, I'm new to this forum.

My PC starts to get really slow when multitasking, to the point that it gets quite annoying, archiving/extracting combined with copying and downloading almost freezes the PC, plus archiving also takes an eternity and leaves the PC non-operational.

So I thought, I have it already since 5-6 years, perhaps now is time to change, as I still have a lot of stuff to do in the future, all my game collections are weekly updated, changed, reorganized and so on. When I then checked when my PC is actually from, I saw that I got it the 10th of May 2010!! So it's already 9 years old. Decision taken, time for a new one.

So I was researching and reviewing every single component for the last 3-4 days and came to a conclusion.

I wanted to post it here, in case anyone has some suggestions or ideas. I should mention some things first, so that you know why I get specific components.

First of all, I use 2 Dell S2715H monitors, which are Full HD only, so no need for any high end GPU.

I play 5% of my time on the PC, prefer playing on consoles, thus it's not really meant for gaming, and if I play on the PC, then it's some kind of simulation, strategy game, turn based or real time, or some graphic adventures, well, everything that definitely plays better with mouse and keyboard rather than a controller.

PC has also to be future proof, reason why I don't want too low end components.

Price is not an issue, I buy a PC every (apparently 9 years), I'm not the one wanting to change every 2 years or so.

Going with this one, as it's still considerably faster than a Ryzen 7, although almost double the price, but still 250€ cheaper than the 2950X.

I probably will change the Vega 56 for a Vega 64, as the shop where I buy it, it's almost the same price.

Or for even a little bit more, I could get an RTX2070, considering also that my Dells don't have Freesync, nor G-Sync.

Wanted to go with a be quiet! Dark Rock Pro 4, but it has one big disadvantage, I goes over the RAM slots, restricting you to 45mm high RAM, and the Corsair I want are 51mm. Could go with G.Skill Trident Z, but they're 120€ more expensive, for same speed and latency.

Still checking some reviews here, wanted to go with the big Dark Base Pro 900 rev.2, as it's the only one where you can still fit an optical drive, which I still will buy, as I have many data BluRays laying around, and ripping will be done. Plus it has USB-C 3.1 on the front, which the other don't have. I'm still looking if I could go with the silent base models 601 or 801. I also have an external BluRay burner, so that's not too much of an issue.

I still have older 2.1 Logitech speakers, and I think it's time to change to something better and more performant, and I have the Edifier 2.1 speakers already for a longer time on my list. Great price/value.

Like I said, it's not so much about the price, if I would now spend 500€ more would not be an issue. But I'd really like it to last longer, as I don't change PCs every 2-3 years. Rather spend the money now and be set for a while.
W

Just be aware that, if you ever upgrade to more than 16 cores, Threadripper's clunky memory controller design can cause performance consistency issues.

This may get fixed with Zen 2.0's shared memory controller, but it's stilll not clear how much tht will impact latency in 4 and 8 chip configurations.
D

Ok, thanks for the information.

Also going for the Palit RTX2070 and changing the memory to G.Skill Flare-X DDR4-2933, seems to be optimized for AMD. If I chose DDR4-3200, it gives me a message that it’s not compatible with the CPU?
W

I'm not too familiar with memory on AMD systems, but it seems to be more picky tan other platforms at overclocked speed (especially with 4 DIMMS).

Since you are working with a quad-channel setup here, I'd recommend going with whatever is on the qualified vendor list for your motherboard. You can still try faster DIMMs, but it may cause you more headaches than you're looking for.

So are you doing anything (like work related) that really requires this many threads? Otherwise you might think about a 2700x.
D

I’m doing a lot of stuff together, mainly copying huge amount of files and extracting/compressing plus encoding. So I don’t actually know if 16 cores would really help or if 8 would definitely be enough. The ONLY thing I know is that at the moment it’s not working at all.
W

DeadVoivod said:
I’m doing a lot of stuff together, mainly copying huge amount of files and extracting/compressing plus encoding. So I don’t actually know if 16 cores would really help or if 8 would definitely be enough. The ONLY thing I know is that at the moment it’s not working at all.
Click to expand...

What is your current system, so we can figure out how far in the hole you are? If it's just a old i3 or Core i5, the 2700x will quadruple throughput.
D

My initial thought was getting the 2700X, plus the AM4 mobos are cheaper. But like I mentioned, price is not so much an issue, and I definitely want to keep it longer, as I don’t plan to change regularly.
W

My initial thought was getting the 2700X, plus the AM4 mobos are cheaper. But like I mentioned, price is not so much an issue, and I definitely want to keep it longer, as I don’t plan to change regularly.
Click to expand...

Well, you buy 2700x today, it will give you 4 times the encode performance. And you will have the option to upgrade to Zen 2 mainstream (released around June), and that should launch with 12 cores, and then later 16 cores.

As long as you buy an x470 motherboard, you should have a guaranteed Zen 2 upgrade path.

And I recommended you don''t shoot or the moon cores-wise. You may find that some software doesn't scale so well, so you're better of with the peak single-thread performance you get with the mainstream platform. You would already be jumping up from 4 threads to 16 threads with the 2700x, and each of them does a whole lot more for you. And if you're needing more performance, there is an upgrade path that only requires you buy a processor.

The Threadripper platform is more for specific use case. I don't think that movie compression scales all that well above the 8 core 16 thread mark:

That's barely 30% performance improvement when you double the cores (ignore the 32-core, they were just showing it has issues). Performance is still growing, but it's very expensive for the performance bump. You see that same issue with the Intel cores at the top of the graph (10->18 cores, 15% more performance).

If price is no issue, then you should just get the 9900k and be done with it. The wide vector units on the Intel plus the much higher clock speeds means it's %50 faster than the 2700x in HEVC encoding. 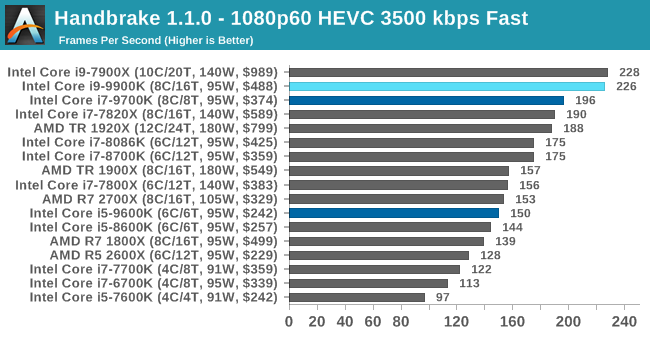 Thanks for the graphs, I also already checked some out myself. There’s one about 7-zip compression that got me hooked to the Threadripper, as I would say that’s one of my main programs always running in the background whilst doing other stuff.

Plus you made my life even worse now by mentioning the Intel CPUs, I tried to completely ignore them

Also, in my case, would I benefit from more memory, let’s say 64GB? Or is that another overkill! That always seems to be a heated discussion as opinions differ so much.

I really think you'll be good with a Ryzen 2700x system based on your use-case... But if you say money isn't a huge issue, the 9900k will somewhat offer you the best of both worlds in terms of single core and multi-threaded performance in general. 8 cores 16 threads is nothing to scoff at, and the higher IPC/clock speed on Intel does handily beat out Ryzen, but the cost difference is quite a lot..

I read about the i9900 now, and saw its indeed single core superiority but still very good multicore performance, that might just do the trick. And I guess getting an RTX2070 with it will be fine, definitely not needing the 2080.
W

8 cores and 16 threads will match the core configuration of the PS5, set to launch next year, so you will have the right number of threads for any demanding console ports. for the next five years, while probably having a 50% clock advantage (Zen on consoles is expected to start at 3 GHz).

Also, AMD is so threatened by the 9900k they're going to launch with 12 core Zen 2. With it's expected 20% faster performance, that will just barely match your 9900k in productivity. We will see if they can actually price it lower.

Convinced, thanks a lot for your insight, help and suggestions.

This setup will even save me 500€ compared to Threadripper CPU and TR4 mainboard, less RAM (32GB) and lower GPU. Excellent.
R

I do really have to ask why the need for 64GB of RAM... I really can't imagine anything you've mentioned requiring that much. And 'future proof' isn't really a reason?

Indeed, will do that, thought the same.
D

I ordered the stuff now, and this will be my setup:

I actually have an 750 i5. But I think I need a more modern PC to play the new games. thanks for share info
T