Sometimes less is more. We typically work with a lot of motherboards that fall into the more is more category and some that have a high price that can’t easily be justified by most people. The ASUS PRIME Z390-A seems to lean towards less is more. On paper the Z390-A seems to have a lot going for it and is light on fluff. How does it stack up? Read on and find out.
B

I'm using this motherboard for the new build in my sig. It seems to perform well so far. I haven't tried any OC yet.

It does have one glaring issue though...

"ASUS supports a feature known sometimes as "fan smoothing". Sometimes this is only adjustable as a single value. In this case it’s presented as two separate values which control the fan speed changes either up or down. You can adjust these to create a smoother or rougher fan speed changing behavior. One might wish to make the changes more gradual, so they are less jarring and far less noticeable."

It simply doesn't work. For the CPU fan anyways. In both the AI Suite III program and the QFan control in the BIOS the smoothing of the CPU fan is ignored and any small change in CPU load will cause the heatsink fan to quickly ramp up the RPM.

Browse to a new webpage? Vroom.

Asus has known about this for a year already (it's also a problem on other motherboards) but they seem to think it's not a big enough issue to fix. It's very annoying.

My last motherboard was an Asus Z97-A and all of the fan settings worked flawlessly.
S

Try setting up a custom fan curve. My Gigabyte board did the same thing - fans ramping up and down during even small load, I've set them to only start ramping up once temperature goes over 65C and all is quiet now.
B

stashix said:
Try setting up a custom fan curve. My Gigabyte board did the same thing - fans ramping up and down during even small load, I've set them to only start ramping up once temperature goes over 65C and all is quiet now.
Click to expand...

I have a custom curve set. Setting it high kinda defeats the purpose of a smooth curve and is just a band-aid solution instead of a proper fix.

Blown Cap said:
I have a custom curve set. Setting it high kinda defeats the purpose of a smooth curve and is just a band-aid solution instead of a proper fix.
Click to expand...

What fans are you running exactly and how do you have those connected. I have not seen issues with ASUS fan controller for years.

Thanks for the review guys.

The two front case fans are Noctua NF-A14 PWM connected to the CHA_FAN2 and M.2_FAN headers.

The rear fan is a Noctua NF-S12A PWM that's connected to the CHA_FAN1 header.

Forwarded to my contacts at ASUS.

PhoenixGenesys said:
Could you always get ASUS to clarify the lack of phase doublers on all of their new motherboards? Even the ASUS ROG Dominus Extreme with 32 power stages is just an 8 phase motherboard, and the VRM is controlled by a single ASP1405 chip, so it has four power stages per phase. When you have two power stages and two inductors per phase, then your inductance gets cut in half, or the case of the Dominus Extreme, it gets reduced to a quarter. I know that NVIDIA board partners are doing the same thing now because big Turing chips are power hungry. The problem is that efficiency goes out the window, and this is especially hard on the PSU. I can understand GPUs for what it's worth, but these are CPUs, and other than saving money and economies of scale, there is no reason to throw away doublers. Less than a year ago the ASUS ROG Crosshair VII Hero came out with a 10+2 phase VRM, which puts to shame the VRM on the Zenith Extreme, Rampage VI Extreme, and other very expensive ASUS motherboards. So I can only wonder what happened between then and now. I just purchased an ASUS X299 Prime Deluxe II motherboard for a new build based on the [H] review. It's competition for the GIGABYTE X299 Designare EX. The difference is that the GIGABYTE has a proper, all Intersil, 12 phase VRM, that can overclock an i9 9990XE up to 5GHz on all cores (500Watts+ power usage) without blowing up. I doubt that the 6 phase VRM on the ASUS Prime Deluxe II can do the same. So I am not sure if I will stick with the ASUS or go with the GIGABYTE.

I am not an electrical engineer. However, I can think for myself, and just like many in this community, I have an analytical mind. So I ask this of ASUS: can you please be straight forward with us, your customers, and tell us why you are throwing out doublers, and how your new VRM designs affect our expensive CPUs, as well as the rest of our computer systems? What about longevity? Thank you, and thanks to [H] for the review.
Click to expand...

When comparing our new power architecture, users and media have found that the new generation omits an IC called a "phase doubler" and then conject it was done to cut costs. This is absolutely not the case; the omission of a phase doubler better suits high power draw CPUs. Based on a one-to-one comparison, the effects of using or not using phase doublers can be summarized by the table below.

Doublers adds roughly 20ns of propagation delay making it harder to get a good transient response, which means using a VRM design with phase doublers may result in a larger transient VDROP than a solution without phase doublers.

We do not comment on phase count because it can be misleading in regards to the overall performance of the VRM. To meet the power demands of these high core count CPUs, we’ve implemented an improved VRM solution that focuses on transient response. The new design teams power stages and doubles the amount of current supplied by each phase, delivering better processor stability during load transitions. The complaints made by the public and several media sites draw a conclusion based on the number of asynchronous phases. While this can be valid in certain contexts, it is not the sole factor in determining VRM quality.

We always evaluate and design VRM according to the needs of the CPU. There is no single solution that satisfies all CPUs and usage models. Since current trend in CPUs is increasing current draw (due to increasing core count), we believe Twin is so far the best solution for the foreseeable future. 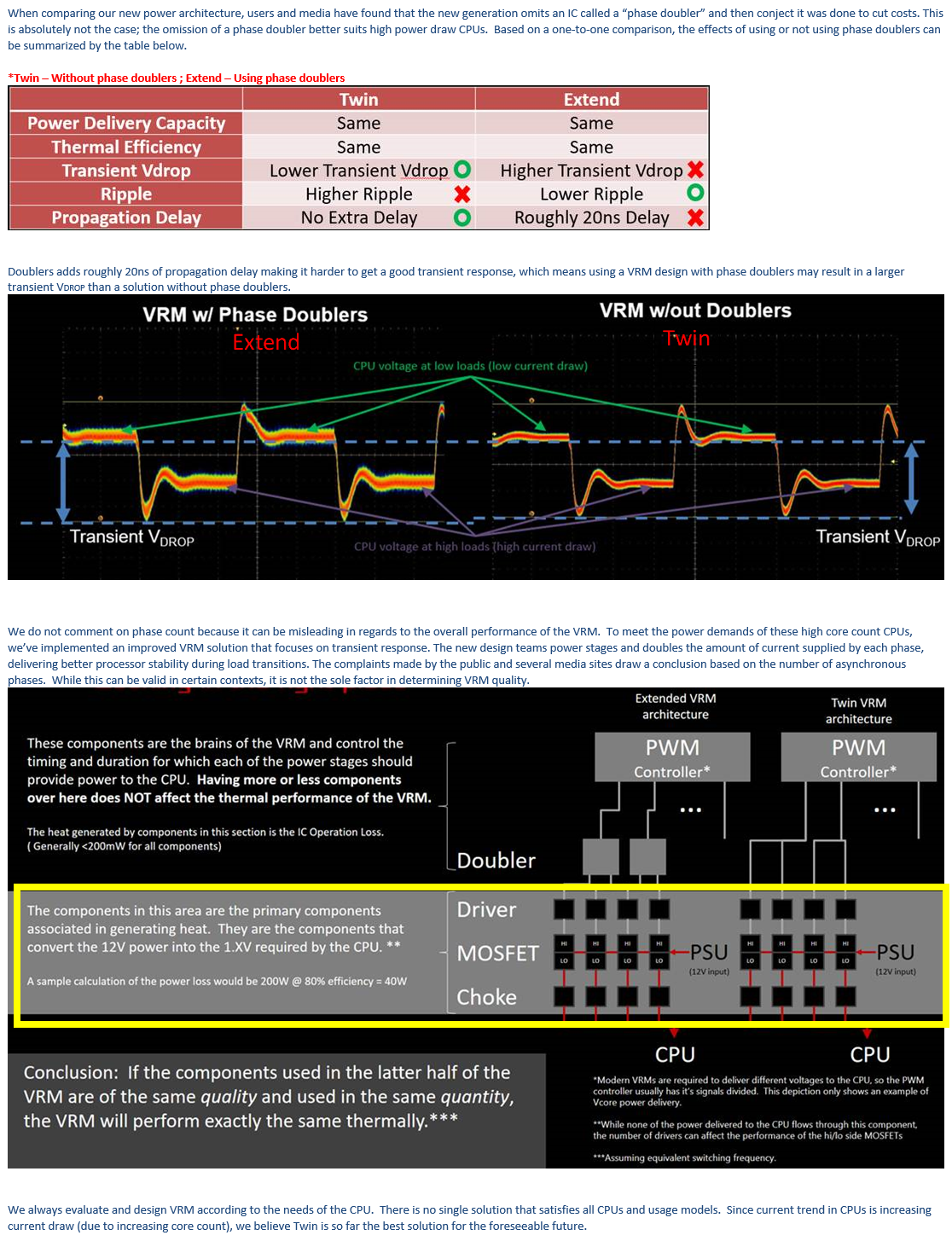 I updated my computer with this motherboard a couple of weeks ago. Well, the disk drives and video card stayed the same, everything else inside was changed.

I was pleased with the locations of the fan headers - which I saw was mentioned in this review - no need for an extension for the rear fan cable to snake around the video card like on my old P6T-SE.

There are quite a few bits of protective film to peel off - I think I got them all eventually.

In the BIOS, if you set the LEDs to "Stealth" then even the power and disk LEDs are off, so there is no point reversing their connections and wondering why they aren't working. Oops

Overall it's a decent and stable board whether you're using auto settings or manual. I like that the UEFI is still easy to navigate which is similar to my older Z97 board.
D

Thank you for doing this review. I stopped buying flagship and halo boards years ago because I just don't keep a computer long enough for me to justify the added expense.

This is right in my target range for an upgrade from my Skylake.

Same price point in Canada as MSI Z390 Tomahawk, which I had a great experience building for my buddy. Glad to know this is another option that may even be better.

Blown Cap said:
Have you heard anything back yet?
Click to expand...