I have strange problem. I use Asus P8B WS motherboard in Supermicro Chassis. By now I had Corsair 1000W PSU.
I decided to change it to PWS-920P-SQ. But Motherboard wont boot. DIAG_CPU led is always on. Of cource I connected 8 pin cpu cable.
I tested another Supermicro PSU and same result.

I tested those PSU on other motherboard and booted smoothly. P8B WS is fine as work good with Corsair PSU.

What may be the problem?

If you put the Corsair PSU back on does it boot again?
P

Yes, exactly. Somehow Asus P8B WS does not like any of Supermicro PSU. While old P4 motherboard boots with that just fine. I have no idea what may be wrong.
Does anyone heard about such misterious incompatibility?
P

This is DIAG_VGA not DIAG_CPU. Its even more misterious. I use onboard VGA.

Is there a difference between the power supplies' +5VSB current it can supply? I have ran into issues before with WS/server motherboards that won't power up if the +5VSB doesn't supply enough current, but that's usually just boards with IPMI/KVM baseboard management capabilities.

Are you sure that's your PSU model? Looking it up at SuperMicro I get a 1U 12V-only unit designed to plug into a chassis. If it is, what's the chassis? It may not be providing the correct voltages or using an older ATX/EPS spec breakout that is compatible with P4-era but not later systems.
P

I am really confused now. Indeed in PWS-920P-SQ specs I read:
+5V N/A
+12V 75A
+3.3V N/A
5V Standby 4A
However I connect this PSU over Power Distributor pdb-pt846-8824. This is ATX compliant. I just checked with multimeter and I got 3,3V, 5V and 12V out of ATX connector.
With this PSU I was able to successfully power SUPERMICRO motherboards X8DTE-F and X10DRL-i and... old Pentium 4 motherboard.
Even it was only chassis PSU, then harddrives SAS/SATA need both 12 and 5 V. So why is specs stating only 12V ?

https://www.supermicro.com/en/support/resources/pws
Looks none of Supermicro PSU supply 3,3 and 5V. I am guessing Power Distributor has voltage converters.
Last edited: Nov 3, 2020

12V only (or 24V/48V) has been the standard in rackmount servers for quite awhile (it's working its way down to our level, there's a long thread about it in here, somewhere). Some motherboards only use 12V, while others rely on a PDU to get the other voltages through conversion. This is what your PDU is designed in part to do, along with the redundancy.

It is not easy to find specs on this thing, but I did find a few things that may generate and answer some questions.
1) When you test it on your Supermicro boards, are you plugging in an extra (5 pin?) cable into the motherboard? That is, is there a connector on the PDU that doesn't have a twin on the Corsair unit (I don't mean the floppy power connectors)? This would be the SMBUS cable that interfaces the motherboard with the unit and helps make everything work right. My guess is that the P4 is old enough to have the -12V on the ATX connector that tricks the PDU into working.

2) Server stuff has very narrow compatibility and validation to work with products. This unit is only validated with Supermicro boards and chassis, and it might just be possible that while the voltages you read are fine, something in it just triggers the protection circuits of the Asus board and it won't accept it (or the other way around).

3) Have you tried resetting the BIOS to defaults and making sure the EPU and GPU Boost switches are put to OFF then plugging in the SuperMicro PSU?

Beyond that, I've got nothing. I could only recommend you continue using the Corsair since it obviously works, but I suppose there's a good reason you're trying to use the server PSU instead.
P

Thank you for you input. I really appreciate your will to help.
Ad 1)
I know there is such connector in supermicro PSU without having it connected supermicro mobos booted successfully.

Ad 2)
Hard to confirm or not. When pressing power button on Asus motherboard, supermicro PSU starts normally. I mean all disks start, I can see diagnostic led on LSI MegaRAID controller. Even I can see it successfully checks disks and validate virtual drive presence. Only Motherboard has problem to post.

Ad 3)
GPU boost is off. I will try resseting bios.

I need to add that I contacted supermicro support. They just answered immediately. I asked about PSU compatibility with 3rd party motherboards and only 12V in specs. These are the answers:

Thank you for contacting Supermicro tech support
The power supply and power distributor should work with most 3rd party motherboards.

I am going to ask same questions to Asus support. Hopefully this will give me more answers.
Also I agree it is hard to call P4 motherboard modern one. I am looking for successor of my motherboard - Asus P9D WS, and maybe something from different vendor to verify. In below reddit thread guy is describing exactly same problem with Asus X99. Sadly he just gave up:
https://www.reddit.com/r/homelab/comments/exv54g/requesting_help_with_new_server_build/

And yes I need Supermicro PSU. Although Corsair RM1000x has 1000W of power, most of it is provided over 6/8 connectors for Graphics cards. I need much power over 4 pin molex connectors to power backplane and 18 x 3TB SAS disks. Unfortunately Corsair is not able to provide such, as sometimes Backplane is lighting red leds, and disks are resseting. This is dangerous and during tests I lost virtual drive (Fortunately I had backup).
G

pablocool said:
I decided to change it to PWS-920P-SQ. But Motherboard wont boot. DIAG_CPU led is always on. Of cource I connected 8 pin cpu cable.
Click to expand...

I find this happens when the EPS12V connector is accidentally swapped with the PCIe 8 pin power cable. Whichever genius designed both connectors made them interchangeable, but the power polarity is 180 degrees inverted. 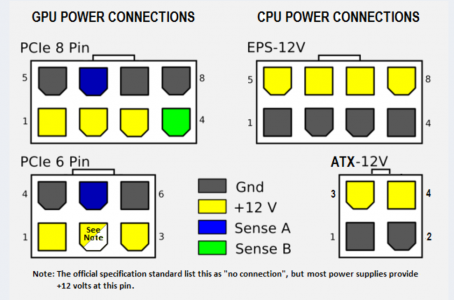 Even though the keying is different, it's very possible to plug in the wrong cable, and it doesn't help that many supplies don't properly label the two connectors.
P

Thanks for input. In both cases I pług EPS CPU power pług. Moreover supermicro is server psu and doesnt have pcie graphic carda pług.

I checked with PCI post board and codes are get are 78 and 15 randomly.
G

pablocool said:
Thanks for input. In both cases I pług EPS CPU power pług. Moreover supermicro is server psu and doesnt have pcie graphic carda pług. 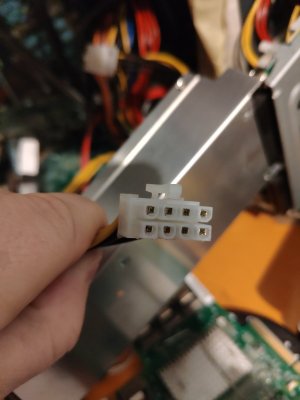 Well the pinout of the connector definitely matches the EPS12v pinout with the +12v on the tab side.

Maybe you could hook everything back up, unplug the power supply from the wall and use a multimeter in ohms or diode mode to check for power rail shorts to ground, which would be any metal on the case. If you got low ohms or a beep, there's a direct short to ground.
P

Sorry but I am afraid I do not follow. Which two points are you suggesting to check if there is short?
G

pablocool said:
Sorry but I am afraid I do not follow. Which two points are you suggesting to check if there is short?
Click to expand...

All of the power rails. Plug the power supply to the motherboard, but make sure its not plugged into the wall.

Put the multimeter in ohms mode. Then take the negative lead (black) of a multimeter and touch it to the case, then take the positive lead (red) and probe all of the power rails (+3.3v, +5v, +12v and -12v.)

You can probe any power rail from any wire which leads to it. +12v would be any yellow wire, +5v would be any red wire, +3.3v would be any orange wire and -12v would be the blue wire on the ATX power connector. You can stick the probe in the back of the connector, just make sure you get a good connection.

In ohms mode, you should get a measurement in the tens or hundreds of k ohm or higher. If you get a measurement in hundreds of ohms or less, there's a short somewhere. Since you said the board works with another power supply, the short is likely going to be a connector with an incorrect pinout sending power where it shouldn't go. Something like the case earlier where I suspected the PCIe and EPS12v connectors were being swapped. But since it's not that, I suspect a connector somewhere else may have the wrong pinout.
P

Nothing interesting came from my testing. I lend other not server grade motherboard from my Friend (1151 socket). It wont boot exactly same as Asus does not... Really crazy thing.
You must log in or register to reply here.
Share:
Reddit Pinterest Tumblr WhatsApp Email Share Link
Top