First, comparing to the Dell, it's not a 2n1, so no tablet mode. Not a huge deal for me as I don't use that mode often, but a bit of a bummer as sometimes it's useful. However, it gains a vastly superior screen (both in size and quality) to the Dell and actually doubles the battery life, easily worth the trade-off, while having around the same dimensions and weight. It also loses a webcam and sd card reader, both of which I use but also both of which can be solved via usb peripherals I already have. Not ideal as I have to carry a couple of accessories, but not a deal breaker. That said, performance is not comparable, the G14 more than doubles the multicore performance and gives a solid 25% jump in single core all while delivering 10h battery life in light use vs. 5 hours on the Dell. The built in vega8 is faster than the 2700u vega10, without even considering the rtx2060. Those are huge jumps given the same form factor, it feels like they're separated by 5 years, not 2.

Now, comparing to the monster Helios 500...The G14 cpu outperforms it, and by a fairly significant amount which blows my mind considering the Helios has a full desktop CPU in it. That's with the G14 at stock and with the cpu on the Helios overclocked to the limits of the machine with a kryonaut repaste and fans cranked up to ear splitting levels, running at 4ghz all core. We're talking an 8 lb desktop replacement with massive fans, repasted and overclocked to the maximum the cooling can handle getting beat by a box stock 14" sub 4lbs thin and light - the G14 is around 5% faster multicore and 20% faster single core. GPU wise, the difference is smaller. In VR, the G14 outperforms the Helios as the Vega arch in the Helios just isn't great for VR, but not by a significant amount, maybe 5-10%. In 2d, the Helios outperforms the G14 by a similar amount...but again, in both cases the Helios is overclocked and pushed to the limits of the machine at +200mhz core and 100mhz ram, with an unlimited power budget (stock 120W gpu, pulling ~150W oc'd) and the G14 is stock running at half the wattage. The difference is ~10% in warzone at 80-105fps for the G14 and 90-120fps for the Helios. Given the difference in form factor (especially considering the 14lbs laptop/charger combined weight of the Helios), that's nothing short of incredible. The 330W charger for the Helios alone weighs more than the G14 laptop/charger combined. Screen wise, they're both good, 120hz for the G14 and 144hz for the Helios, both freesync, but colors are a little better for the G14. My eyes are still good so the size isn't a big deal. Port wise the Helios has more, including gigabit ethernet (another accessory for the G14, but I have one so nbd as it's not needed often). Biggest difference is the usb-c port on the G14 supports a higher display port version so can drive higher res. That can be good for VR, depending on the headset. The Helios can get 1.5 hours on battery max (not while gaming, that's like 20 minutes). It's meant to move from outlet to outlet, it's more of a UPS. G14 gets 10 hours.

Software wise, the G14 needed the least tweaking to get the most out of it (update the nvidia drivers and figure out how to set the right display adapter for certain software, mainly VR, and it was all good), the Helios requires the most by far. The Helios requires some fairly hefty driver tetris to get working at it's maximum, including a 3 step GPU driver update (load driver and reboot, unlock oc via afterburner and reboot, load registry power table and reboot). The Dell needs ryzenadj to properly set the cpu tdp, but due to some dsdt wizardry they've done, has to have stapm timer unlocked vs just a tdp set which took hours of tweaking to get working, along with loading nbfc to properly set the fan curve. AMD in general still has a long way to go to get oems to properly support their hardware, but the G14 is a step forward as it operates at maximum for the chassis pretty much out of the box unlike the other two, so hopefully asus keeps the G14 up to date - but based on their gl702zc, I kind of doubt they will...which means we may have some continued driver tetris to look forward to. Unlike some here who are concerned with temps, even though in spec, I love that they released it set up to perform at the maximum the chassis will allow out of the box, unlike the other two which require a ton of tweaking to get to that point - and community developed software to do so. I spent hours on both of them tweaking them to get get the maximum out of them, the G14 was much easier.

Some other observations. The Helios has one of the best laptop keyboards I've used. The Dell's is good but nothing to write home about. The G14 is somewhere in between. The keyboard lighting is fine for me, I don't need it very often and when I do, setting it to max I can read everything fine. I don't know why people harp on that, for the most part I leave it off, same on the Dell. I leave the RGB lighting on on the Helios as being much darker in color, I find leaving it on makes it easier to read and it has more keys (num pad) so I look at it more often. The Helios sounds like a jet when it's ramped up, the G14 is a little quieter, but I have a VR headset or headphones on most of the time so don't care much on either. The Dell is just fast enough to enjoyably game at 720p (which is nbd given the screen size), but I usually don't bother. One thing the Helios and Dell are missing is Cuda acceleration, which I have some software that makes us of, so the G14 is a huge boost there. The G14 is a great replacement, sacrificing nothing important to me, gaining me cuda acceleration, while having a few compromises, mostly having to make sure I have the proper usb cords for my cameras with me instead of being able to just pop in an sdcard. Also, even a crappy webcam is better than no webcam, and while I can usually just use my phone and I have an old usb webcam if I really want to use the G14, it seems like a kind of dumb omission. An sdcard reader and 720p webcam would really elevate this thing and cost Asus maybe $10 (that they could turn around and charge me $50 for and I'd gladly pay). Still, 10 hours of battery and sub 4lbs weight in a machine with this performance is amazing.

All things considered, this is making me even more curious as to what they will be able to do with their next gen mobile chips and mobile GPUs. Hopefully AMD will have something competitive and vendors won't have to rely on Nvidia GPUs next time - maybe some kind of mobile NAVI???
R

So basically, due to Covid, I'm watching our 18 month old in the living room all day. The home theater has been lost to Daniel Tigers Neighborhood as is my HTPC with it's nice gaming setup. I recently bought a Razer Stealth 13 with a GeForce MX250, but quickly found it lacking as a full time gaming and editing rig, and the wife rejected my plan of moving my 9900K / 2080 rig to the dining room table. So laptops or bust.

So far, I've been pretty happy with the G14. The build quality is big step below the Razer, but that's to be expected. It gets burning hot to the touch while gaming, the metal feels a bit like plastic, the power cord design is out of 1990s laptop, and it has the worst backlit keyboard I've ever used. I just turn it off now as it's actually easier to see it without the backlight. I knew all this when I bought it. On the flip side, the performance has been outstanding. I can happily play Battlefield 1 in the 90FPS range on Ultra, and the Gsync/Freesync display keeps everything looking good. While not as good a display as a true IPS or OLED, it's acceptable, and I like the 120HZ refresh. The keyboard feels squishy, but fine. I don't have high expectations for laptop keyboards so I'm rarely disappointed. Editing in Adobe Premier has been fine as well. The built in speakers are pretty decent.

I even tried using the Vega iGPU for gaming and it plays older stuff well enough. It's faster than the MX250.

For the price, this thing is hard to beat. Yes, it has some issues. But overall, for something that feels like an ultra-book, it's excellent. I'm very happy I bought it.
S

All things considered, this is making me even more curious as to what they will be able to do with their next gen mobile chips and mobile GPUs. Hopefully AMD will have something competitive and vendors won't have to rely on Nvidia GPUs next time - maybe some kind of mobile NAVI???
Click to expand...

i know they announced the 5500m in october, the 5300m in november and then mentioned the 5600m/5700m like 2 or 3 months ago but i haven't seen any of the gpu's mentioned outside of that. aparently MSI has something with the 5500m but dunno.
J

Pics and Vids or it did not happen!
B

jcagara08 said:
Pics and Vids or it did not happen!
Click to expand...

Here you go - maxxed out minecraft RTX and size comparison to the Helios 500 that it goes toe to toe with. 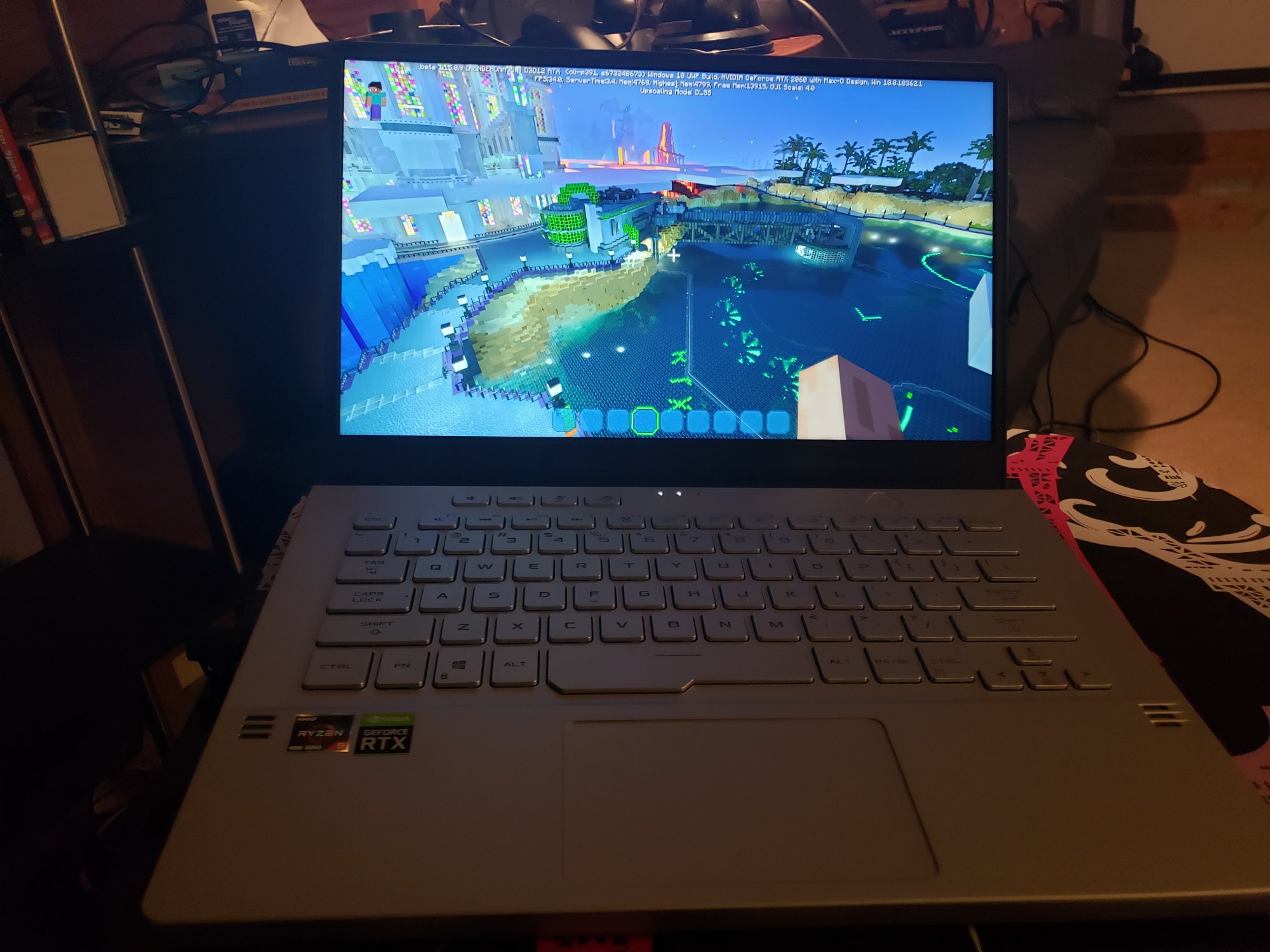 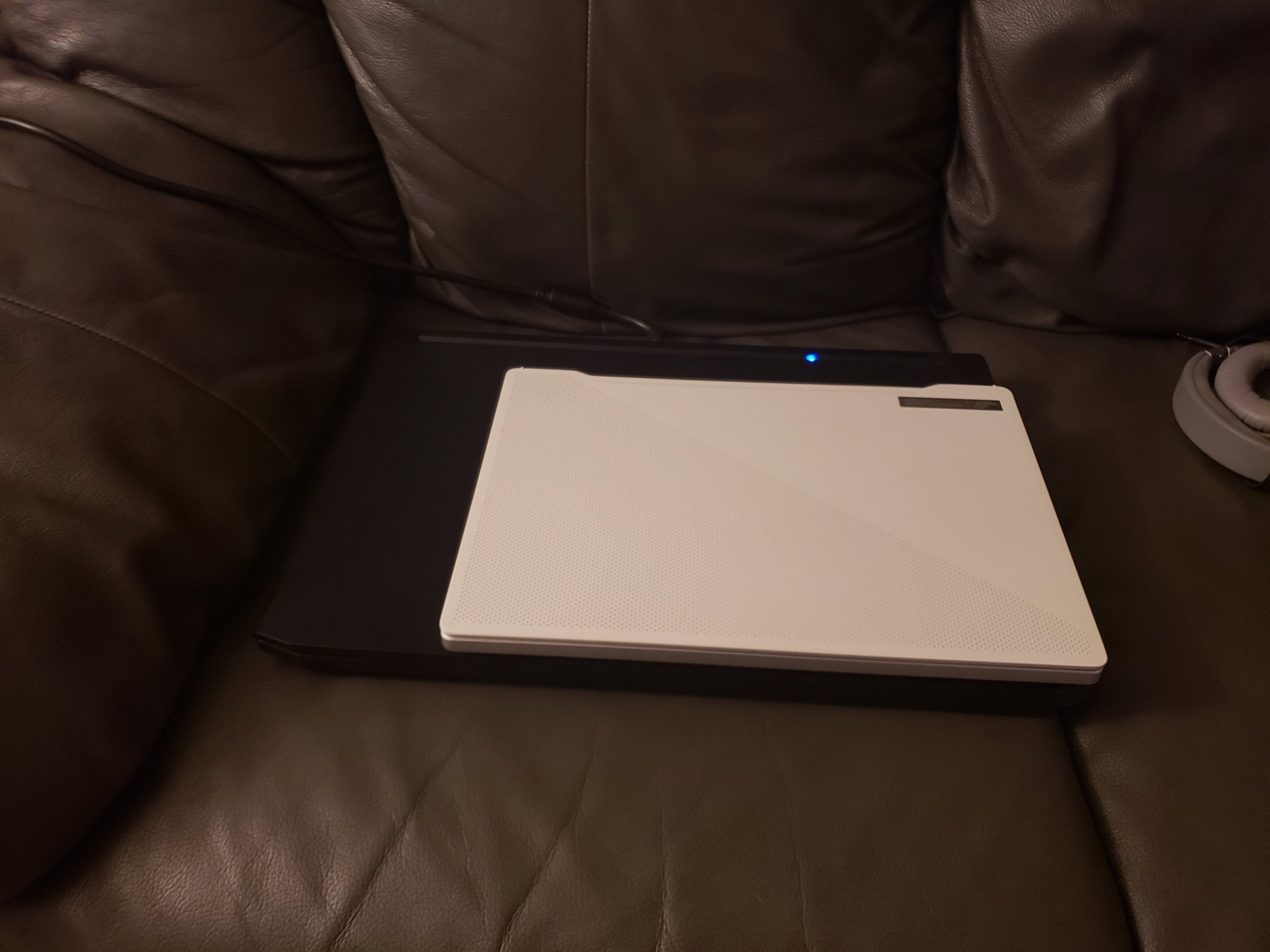 bobzdar said:
Here you go - maxxed out minecraft RTX and size comparison to the Helios 500 that it goes toe to toe with.

whoah what a beauty, no pun intended buddy, just wanted to see how it looks like, looking great!

looking to purchase this, but it seems to be rare in my place maybe due to the corona craze