Anyone here old enough to understand this ?

I am proud to admit that I do.
D

Yes, I am old enough to understand this reference.
D

486 33mhz, I'm guessing no math coprocessor? Man what a difference the coprocessor made on floating point calcs, lol. Yeah, I had a 286, 386 then jumped up to a Pentium (no MMX). I also played Oregon trail many times on an Apple II, probably still my all time favorite game.

Sulphademus said:
I didn't know EDO went as fast as 200!
Click to expand...

It didn't (66Mhz) but the people the "joke" is aimed at wouldn't realise that (nor probably would the woman in the cartoon).

I was using BBC Micro systems at infant school in the late 70's & remember playing Elite on them in the very early 80's. First DOS based PC clone I worked on (physically taking it apart & repairing it) was in the very early 90's with a massive 10MB hard drive & 2 x 5.25" floppies! VGA graphics with Prince of Persia was the dogs dangly's then compared to "Head Over Heels" 3D wireframe type platform game
Last edited: Feb 20, 2020
C

Ok, so looking stuff up about EDO, it sould like it wasn't actually running at 66Mhz. That is just the max bus speed that EDO was specified to run at.

It really sounds like EDO DIMMs run asynchronously from the bus speed.

Ready4Dis said:
Oregon trail many times on an Apple II
Click to expand...

Great game played the newer version on the 486. 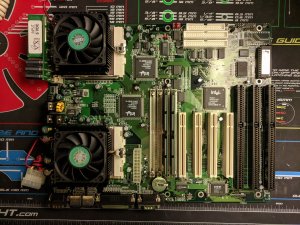 128MB? Wow! I remember when we had 1mb (640kb and 384kb in shadow ram) and trying to use QEMM or whatever to try to load crap into upper memory to have more ram to run apps. Damn that was a long time ago ... anyone remember Egghead game / software store? Not sure if it was anywhere else (other than the east coast), back when EA was still a good game company :-D
D

I used to hang out at Egghead at the mall lusting for stuff I couldn't afford. Those were the day, LOL.
P

We had an Egghead in San Diego back in the day. Was a candy store for nerds. Loved it. Bought those 720KB 3.5" diskettes and used the hole punch to make them dual side 1.4MB diskettes. I remember buying Starflight there and losing whole weekends to it.

We had an Egghead about 30min from my house. I loved going there. Closer to my house, about 5 minutes away at the mall, we also had a Software Etc. I always drooled over the AWE64 Golds, Sound Blaster Platinums, and Voodoo cards. One year for Christmas my parents ended up getting me a SB Live and a Voodoo Banshee.

Yes. Long after I spent many days typing in machine code out of Compute! magazine so I could do neat stuff on my Commodore 64. Which had soldered memory which was slower than this here fancy EDO RAM.
B

Yup Yup. I actually have some brand new 64mb EDO 72pin kits for sale on ebay. Found them in the WAAAAAAYYYYY back of the closet.

Of course the 200mhz reference was wrong, but it's a playboy cartoon or something, not a tech reference.

OliverQueen said:
Prince of Persia was the dogs dangly's then compared to "Head Over Heels" 3D wireframe type platform game
Click to expand...

Lol, I remember that game. I may still have the install disc's for that somewhere

Ahhh yes, memories. I remember 32Mb of EDO memory, 66Mhz Cytrix 686 CPU, 25Mb Maxtor HD, SoundBlaster 16 ISA... long forget the video card I had back then though on the PCI bus, may have been a Matrox Mystique 220... the oldest card I still have in my possession anymore is a Voodoo3 3000 AGP sadly.

I have a pile of FPM around here somewhere
D

I remember that my parents paid several hundred dollars for 8 kilobytes of ram for my first computer in the early 1980s.
D

drescherjm said:
I remember that my parents paid several hundred dollars for 8 kilobytes of ram for my first computer in the early 1980s.
Click to expand...

If I had all the money I spent on computer stuff that's now taking up space at the dump I could retire to Hawaii.
B

Deadjasper said:
If I had all the money I spent on computer stuff that's now taking up space at the dump I could retire to Hawaii.
Click to expand...

I feel your pain. Probably more like a new Honda Civic than a retirement in paradise tho. And this is coming from a guy who dropped a cool grand on a 2x cd-r burner back in 1996 (and 2x speed was a joke, it was just tempting the coaster gods to laugh at you). And $10 a blank unless you bought in bulk..... thousands of dollars just in optical media over the years. Good times.
D

Burticus said:
I feel your pain. Probably more like a new Honda Civic than a retirement in paradise tho. And this is coming from a guy who dropped a cool grand on a 2x cd-r burner back in 1996 (and 2x speed was a joke, it was just tempting the coaster gods to laugh at you). And $10 a blank unless you bought in bulk..... thousands of dollars just in optical media over the years. Good times.
Click to expand...

How well I remember. Optical was the miracle tech of the century. People paid extra for software that can on a CD.
G

cyclone3d said:
Ok, so looking stuff up about EDO, it sould like it wasn't actually running at 66Mhz. That is just the max bus speed that EDO was specified to run at.
Click to expand...

66MHz EDO would have been bitchin' fast, there was never consumer motherboard memory using the EDO standard that ran that fast. There were very specialized high speed EDO memory chips made for video cards though, like the Voodoo and Voodoo2.

The absolute fastest EDO memory available for consumer PCs was 50ns, and that wasn't until late in its life when SDRAM was supplanting it. Most of the time it was 60, 70 or 80ns. Older 30 pin SIMMs that used FPM or PM ran much slower, I have some ancient 30 pin SIMMs that have 120 and 200ns ratings.

Yes. PM, FPM and EDO all operated asynchronously to the FSB. 50ns is 20 MHz, 60ns is 16.67 MHz, 70ns is 14.28 MHz, etc. Lots of wait states were used when accessing main memory, which is why large motherboard caches using SRAM became important. You could hit the cache at the FSB speed, which was 3 times or more faster.

Yes, and I remember when EDO RAM first came out to replace Fast Page.

I do as well, pretty good

Wow talk about a flashback. I can't remember the last time I heard anyone talk about EDO.

Youngsters!
(get off my lawn!) 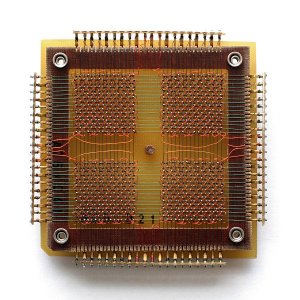 I still recall how the HX chipset had a tag RAM that allowed caching above the 64MB range with EDO support only. However, the VX had support for faster FSB SDRAM with no higher 64MB caching range, and it was a bit of a interesting choice at the time. The Apollo VP2 chipset was really an excellent chipset. Had excellent buffers for concurrent operation with the buses, 512MB cache, a tag RAM with write-thru caching though, but at a much higher install support for RAM. You can have your choice too with EDO or SDRAM. AMD later licensed the VP2 for their AMD 640 chipset line for the K6 series. Anything after the VP2 sucked ass and was nothing more than shit.
S

Those of you that grew up on the Oregon Trail on the Apple IIe computers might also remember Odell Lake and Where in the World is Carmen Sandiego. You may also remember typing papers on Mecc Word and printing awesome banners on seemingly endless paper using a dot matrix printer with holes on the edges for the printer's feed rollers, which had perforations where you could remove them. I really loved making those banners. Some were over a dozen pages long. That was a common thing back then to be able to make huge banners with an everyday printer. What happened? Anyone remember Mecc Graph? I had to do 6th grade science presentations (e.g. the effects of video games on heart rate and blood pressure or the effects of various zit creams on agar filled petri dishes) by making graphs on it, then taking the paper printout and copying it on to a transparency for an overhead projector. All of that software came on 5.25" floppy drives. I still have a few. Those were the days... I feel old now.

I still have a nice Compaq Armada 1590DMT Pentium MMX laptop and docking station. The laptop has a lot of impressive features:
3.5" floppy AND CD ROM
Line-in and line-out audio - made for good work with a stereo.
two expansion card slots
parallel port for printers (older cable for printers; they were super thick, heavy, and not very flexible)
serial port, but not USB
VGA out
PS2 for kybd mouse
Power input didn't need an adaptor on the cord! No annoying box halfway up the cord. It was built into the laptop itself; of course the laptop was heavy.
Also, this thing was WIRELESS! Well, you need some oddball infrared device, but the laptop had an IR window on the back of it and on the docking station.
It had a faxmodem built into the laptop.
The touchpad was somewhat new, replacing older red dot option in the middle of the keybard.

There was a time a friend left this laptop on the roof of my mother's car so that he would have a free hand to open the car door. He got in and forgot about it. Not knowing this, I drove off and made it a couple miles before it flew off the car roof into a ditch at an intersection. Once we figured out why it was missing, we found it, and it was (and still is!) somehow still completely fine.

Am I the only one here who actually used Burst EDO RAM?
G

Unabomber said:
Am I the only one here who actually used Burst EDO RAM?
Click to expand...

Probably. By the time BEDO was ready for market, all asynchronous memory types had been dropped for SDRAM. Apple was the last holdout with their weird 5 volt 168 pin EDO DIMMs used in many of their Power Macintosh machines, like the 6360, 6400 and 6500. Everyone hated Apple for using them because it made the memory proprietary and expensive. They eventually went back to industry standard modules with the G3 series and later.
T

I don't get it... I mean I do... minute amount of ancient RAM, running at (comparative to now) super slow clock speed... ha ha?
Is there a pun here I'm missing or something, or is that it?
L

Sooo many hours spent on the oregon trail I decided to move here lol.
C

Hmm I hate to admit that I do
Y

Oh yeah, that and older. Haha. First computer we got was a 286, that was followed by a Pentium 166mhz, I can still see the MMX logo in my minds eye.

lol im only 39 but i do get it cause for awhile i had to use a old pentium with 32 or 64 megs of ram might even been less it was windows 95 days cause i killed my main pc overclocking/modding it to a new heatsink lol. That old pc had 1 pci slot i had to decided if i wanted internet or a video card to do some movie watching couldn't do both lol.
You must log in or register to reply here.
Share:
Reddit Pinterest Tumblr WhatsApp Email Share Link
Top