AMD's Next Horizon Event is Live

AMD's Next Horizon event is live. AMD is posting slides of the event on slideshare, and on Twitter, while some sites at the event are independently covering it. Currently, AMD's event page doesn't have a live stream, but you can check out the promotional video they just uploaded here.


Today, AMD demonstrates its total commitment to datacenter computing innovation, at AMD’s Next Horizon event in San Francisco, by detailing its upcoming 7nm compute and graphics product portfolio designed to extend the capabilities of the modern datacenter.
S


removing original link since it was just a restream of alex on tech's stream..

watch this one instead..

Thanks. I saw that, but the live stream wasn't there a few minutes ago.


EDIT: And just so you know, that guy is screen capping Alex on Tech's stream, and doesn't have the whole presentation.
Last edited: Nov 6, 2018
S

AlphaAtlas said:
Thanks. I saw that, but the live stream wasn't there a few minutes ago.
Click to expand...

it's not official.. found the link on anandtech's live blog.

Alex on Tech is streaming AMD's Next Horizon event live.

Check it out here.
M

The word of the day: double-double.
S

nice zen 2 will have hardware fix for spectre.

now they're getting to the good shit.

Can't watch this at work

Will have to rely on comments here to keep up with what is going on.

Hoping for some good performance news for Zen2 3000 CPU's.
S

it's mostly going to be server related and maybe enterprise vega 7nm.

this guy(forgot his name already) is shitting all over intel without ever directly mentioning them.. friggin hilarious.

That's cool. Chiplet designs basically avoid certain microwave circuit design limitations. It was nothing but theory back in the early 2000s (I have some books on the topic), and now you can buy 7nm chiplet compute cores. Smart move.

Yeah, I just saw that. This is a Datacenter event. But certain things can be used as predictors for the consumer/enthusiast/pro-sumer parts.

It's rare for me to encounter stuff I don't have any clue what it is, but that happened today. R5a, M5a and T3a. Never heard of them before, and google isn't helping much
J

Zen 2 news? Any non-datacenter info on this?
S

Joust said:
Zen 2 news? Any non-datacenter info on this?
Click to expand...

nothing yet for non datacenter stuff but i'd expect the chiplet design to be used with zen 2 am4 which could be a massive improvement over zen+ but i think threadripper would see the biggest improvement. 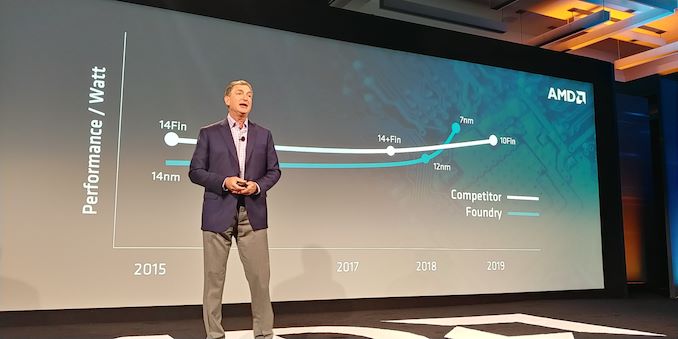 I mean, It has a useless level of detail, but still nice to see that they are optimistic!

Joust said:
Zen 2 news? Any non-datacenter info on this?
Click to expand...

Not really. Now they're talking about gpu density in the datacenter for remote computation. They've got a new, very small form factor Radeon card. Considering that the best small form factor computers are based on datacenter type components (mini-PCI-E), this is good news for some.
S

I mean, It has a useless level of detail, but still nice to see that they are optimistic!
Click to expand...

sirmonkey1985 said:
he actually goes further in the discussion saying that yes it's 7nm but it's basically the same critical design size as intel's 10nm.
Click to expand...

I think we expected that. TSMC has always been slightly larger at the same node name compared to Intel. It's a shame everyone can't just use the standard ITRS definitions. Either way, Intel's 10nm has serious problems, but TSMC seems to have their process working, so that's an advantage right there.

Also, notice that the axis on the chart is perf/watt, so it's not simply a matter of charting the node size.
S

"We believe in open source because we don't have the means nor the staff to do it ourselves"....

The conversation regarding Infinity fabric and PCIe4 seems pretty interesting.

Connected in a ring, no scaling or switching, 100GB/s per link GPU-GPU or CPU-GPU.

No mention of latency though.

Stoly said:
"We believe in open source because we don't have the means nor the staff to do it ourselves"....
Click to expand...

That's the sentiment on all fronts right now. "Ain't nobody got time for this" until AI takes over.

Stoly said:
"We believe in open source because we don't have the means nor the staff to do it ourselves"....
Click to expand...

The only problem I have with them touting their Linux support is that I recently built a Raven Ridge Ryzen 5 2400G APU for my fiance.

It's been on the market for 9 months, based on a CPU infrastructure released almost 2 years ago, and a GPU infrastructure launched over a year ago, and it still isn't running properly with current Kernels and MESA drivers.

They really need to get this shit working right, and shortly after launch if they want to claim good open source chops.

IMHO, if you don't have full hardware support in current distributions by 2 months after launch, you are done. PC product cycles may be longer today than they were 20 years ago, but even so, no one wants to buy hardware and have it depreciate in front of their eyes before they can even fully use it.
S

basically just talking about features and simulation stuff right now for machine learning. i'm officially lost on this part of it since the guys hard to hear on the stream.
S

I mean, It has a useless level of detail, but still nice to see that they are optimistic!
Click to expand...

MI60 is slower but with much less power draw than Volta/Turing. Which while more plausible I don't really think AMD can pull it off either.

And that's not even taking into account nvidia at 7nm.

Stoly said:
So this would mean that MI60 would be faster than Volta/Turing at similar power comsuption which I don't think is anywhere near possible

MI60 is slower but with much less power draw than Volta/Turing. Which while more plausible I don't really think AMD can pull it off either.

I read this chart to apply to the CPU side, vs Intel, not the GPU side vs Nvidia, but I could be wrong.
S

drop in support for current socket same with Milan in 2020.

also thank god for Lisa Su, i was seriously starting to fall asleep until she went back on stage..
J

Lisa Su is my hero.
S

Alex on Tech says he'll be streaming the demo stuff in about 50 minutes or so.. sadly i need to go to sleep so i'll have to watch the vod.
You must log in or register to reply here.