AMD pushes back on Tiger Lake with Cezanne mobile CPUs

Looks like AMD is gearing up to release their Zen 3 mobile parts, as expected. The 4000u Renoir parts already gave the 11th gen parts strong competition, so looking forward to what these can do.

Major upgrades include Zen 3 cores (though only on certain models?) as well as increased cache.
K

All specifications for the new Cezanne and Lucienne parts:
https://www.techpowerup.com/275702/amd-ryzen-5000-mobile-series-specifications-leaked

AMD really is not giving TGL any slack, even when Renoir already performs well against Intel's new CPUs.

Early look at some of the H series Cezanne parts:
https://www.google.com/amp/s/www.to...md-ryzen-5-5600h-cezanne-zen-3-cpu-benchmarks

The performance boost of Cezanne should be able to match the 6 and 8 core TGL-H parts when they are eventually released.
https://www.google.com/amp/s/www.to...1th-gen-core-i7-11370h-tiger-lake-h-benchmark

Looks like both AMD and Intel will have very strong parts in the H series.
N

The 5900H already showed up on geekbench and it is a beast!
https://www.tomshardware.com/news/ryzen-9-5900h-hits-geekbench-5
(yes not the best benchmark but it should scale similar when comparing with dame architecture)

Scores are not far behind the 5800x and remember, this a mobile part!

A 5750g would be a great stop gap to go against RKL, especially for those wanting an iGPU.
N

Perhaps the desktop part is not far away and hopefully beyond OEM as it would be a great RKL counter.

As for the 5980HX, maybe a 12 or 16 core part to counter TGL-H since that will max out at 8 cores. If they can make an 8 core ultrabook, a higher core count full frame seems.
A

Good luck finding one. Supposedly most of AMDs capacity at TSMC goes to consoles. They can introduce all the products they want, they can't supply the demand.
K

looks like rocket lake gonna beat cezanne to the punch

Check out TPUs feed as well. Performance laptop manufactures are already switching to AMD. They want more than 4 cores and do not want to blow their power envelope on CML-H nor fart around waiting for higher core TGL-H.
K

no mention of desktop APU.

I'm not looking to overspend for an AMD laptop. Desktop for me only, and it looks like AMD is still gonna have supply issues.
A

I thought I saw the desktop apus mentioned. I tend to pay little attention to these products from AMD because I doubt they can supply the different markets. Odds are OEM only for some things.
K

no. Those 5000 series OEM chips they mentioned are non-apu
M

I'm not looking to overspend for an AMD laptop. Desktop for me only, and it looks like AMD is still gonna have supply issues.
Click to expand...

CES stuff but at the top 5k Mobile

Cezanne H series desktops dominates as expected and Asus even managed to stuff it in a 13" ultrabook.

TGL is expected to get an 8 core part to replace the 8 core CML-H eventually, but for now, AMD is dominates on all mobile form factors.

based on that topology diagram, AMD could have updated their multimedia engines.

but there are no major improvements in vega

Kdawg said:
based on that topology diagram, AMD could have updated their multimedia engines.

but there are no major improvements in vega
Click to expand...

Looks good but I'm also interested in battery life tests, which appear to be missing
N

Kalessian said:
Looks good but I'm also interested in battery life tests, which appear to be missing
Click to expand...

If you know the power consumption of the application (w) and the battery rating (w/h) you should be able to math it relatively close.
K

Nightfire said:
If you know the power consumption of the application (w) and the battery rating (w/h) you should be able to math it relatively close.
Click to expand...

Still waiting to see availability. Might not be worth even looking for one if specs are all over the place and its hard to find the good ones (nice screen etc)
N

More Cezanne-H goodness with a more popular cpu. Intel launched TGL-H in "special edition" but it is just a 4 core cpu!

It would really be a shame if Cezanne didn't make it to DIY. It has the potential of taking on TGL-U/H as well as RKL-S.
https://www.tomshardware.com/news/amd-ryzen-7-pro-5750g-zen-3-apu-reaches-475ghz-all-cores

chip shortage is severe, so maybe DIY won't get it in time.

i'm impressed that the Intel Xe 96eu beats vega on the cezanne.

i just wish they could squeeze the same thing into alder lake.
alder lake will only have 1/3 the power
Last edited: Feb 11, 2021
T

Kdawg said:
chip shortage is severe, so maybe DIY won't get it in time.
Click to expand...

If it's like Renoir, grab a chip when there's reports of reputable (European) sellers selling them, if you wait, you'll probably need to buy from Aliexpress.
K

highly likely i'm gonna be getting Alder Lake from Microcenter, if mobos are cheap enough and ddr5 isn't too expensive
M

Good luck with that
N

would be killer if they didn't cut the igpu in half.

Are there any laptops with these things out there yet? I have had my eye out but I can't find any at all. Is there even an ETA? Especially interested in the HP ProBook line for my organization.

compgeek89 said:
Are there any laptops with these things out there yet? I have had my eye out but I can't find any at all. Is there even an ETA? Especially interested in the HP ProBook line for my organization.
Click to expand...

Lenovo has 4 week build delays (and no stock) on Zen2 APUs right now so would expect they are keeping channel clear for them.
B

compgeek89 said:
Are there any laptops with these things out there yet? I have had my eye out but I can't find any at all. Is there even an ETA? Especially interested in the HP ProBook line for my organization.
Click to expand...

Not yet, all say 'coming soon.' They've moved up a bit in price, so be prepared, but they took the performance lead with zen2 and extended it another 15-20% with zen3, so not surprising.

Sweet! Unlike Renoir, Cezanne will come to DIY desktop.
https://www.techpowerup.com/280964/amd-launches-ryzen-5000g-cezanne-apu-lineup-for-oems
With the iGPU, these match up well to RKL-S. With a dGPU, they should be very close to Verneer despite having half the cache and PCI-3.0.
N

Cezanne U series hits reviews and it is a beast as expected.

TGL-U has a stronger igpu but Cezanne is a beast everywhere else, especially at 15w. 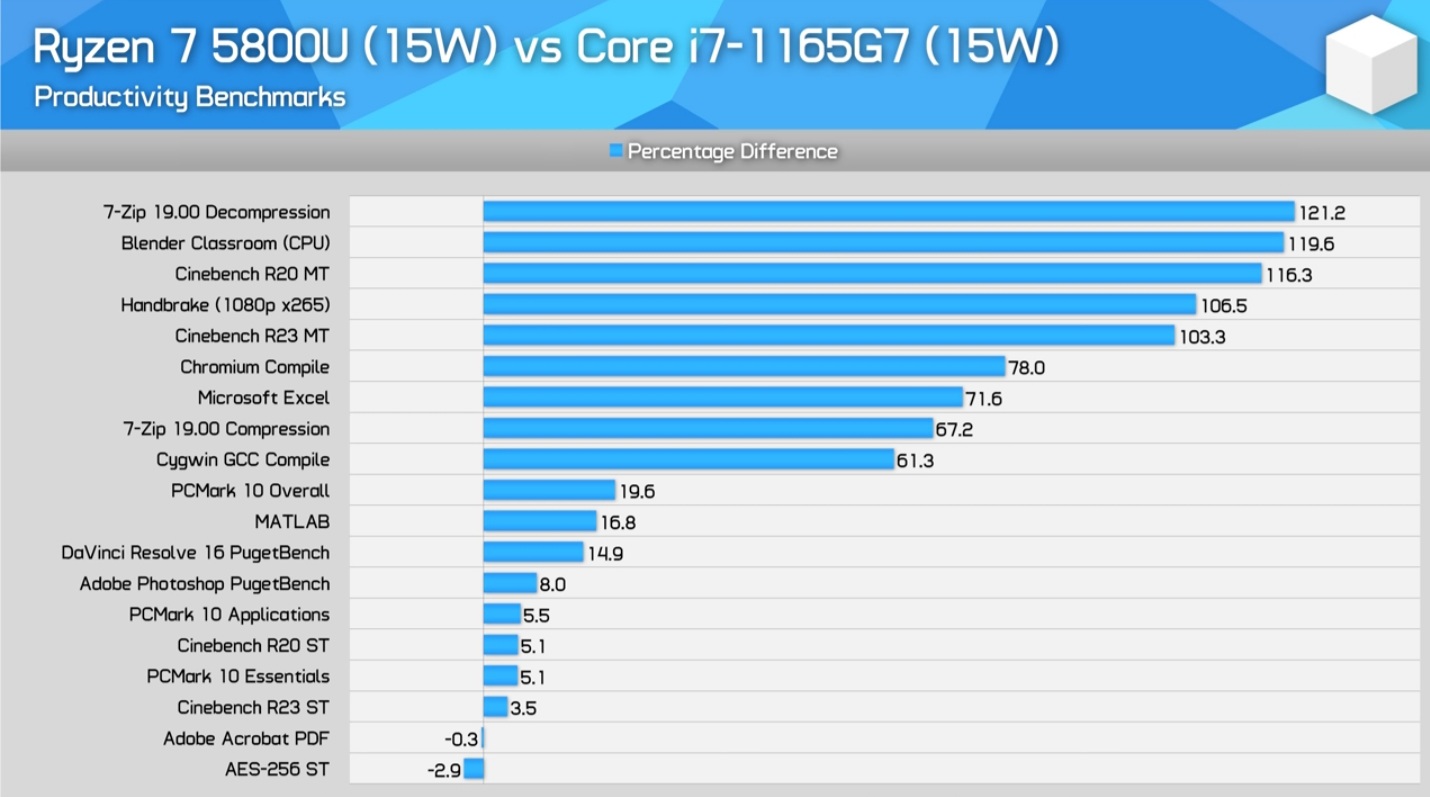 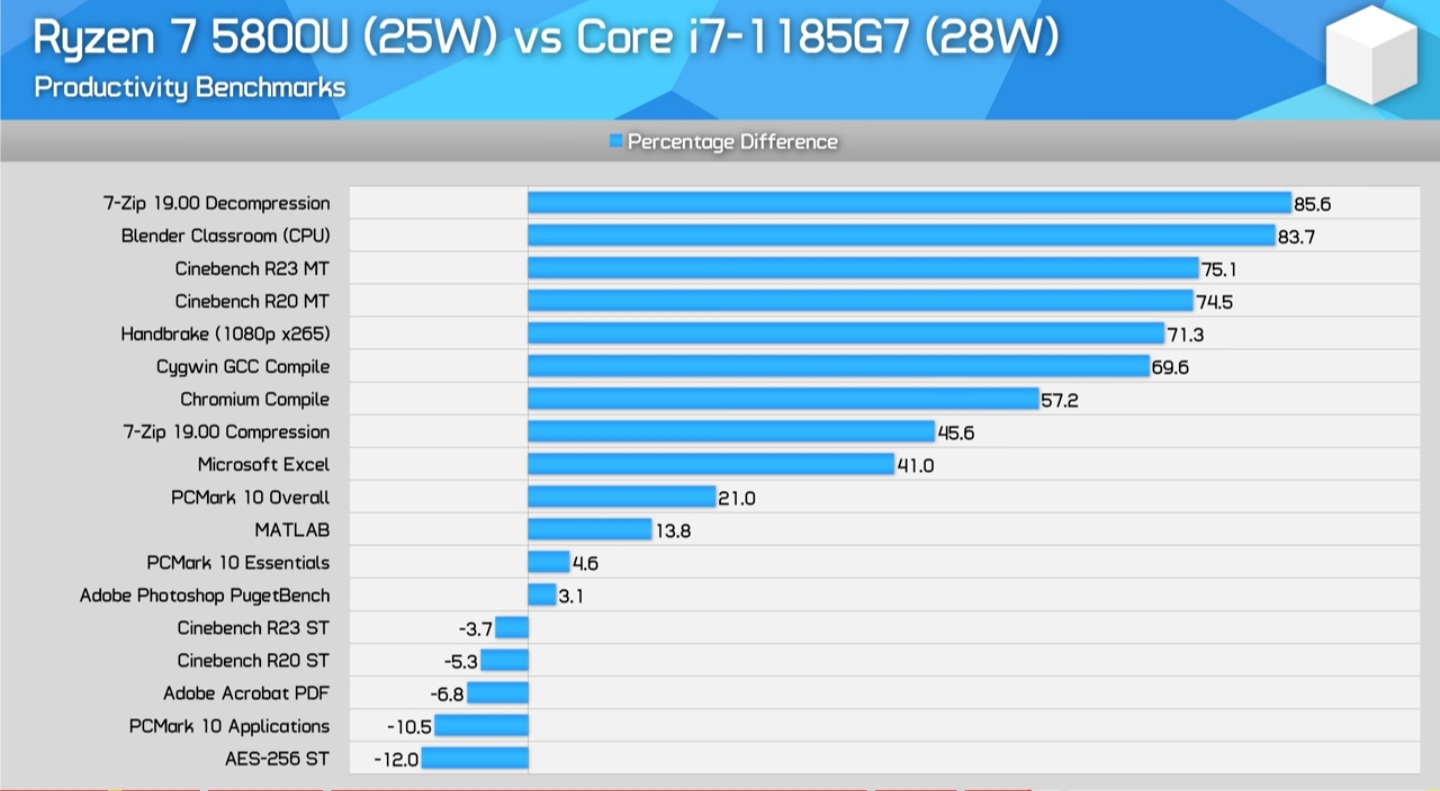 The Intel i7-11370H CPU. This CPU deserves its own meme. With 4 cores (despite being named an i7!) it loses in most tests against the last gen 6 and 8 core CML-H parts to include gaming - and sometimes by a very large margin. The 5600H will demolish this CPU as well. ASUS was the only laptop manufacture that even bothered with it.

I'm in the market for a "sub-mITX" mobo for an upcoming project and I've been looking at options for NUC / 4x4 styles , with the AMD 5800U seemingly the best option for CPUs - IF I can find one! Its clear that the Zen3 cores with 8c/16t are quite powerful and efficient vs the somewhat pitiful 4-core max Intel offerings. Unfortunately, coming with the Vega GPU cores makes it fall short next to Intel's Iris XE which wouldn't be too big a deal except for one thing - Intel seems to have better chipset features?!

One reason I was considering going for the 5800U and its decent but not exceptional graphics cores could be worked around with an eGPU solution, but so far from what I've read it seems Cezanne U only supports PCI-e 3.0 instead of 4.0, frustratingly. This means that its likely a 4x4/NUC style mobo will only have an electrical/data connection for PCI-E 3.0 x4 (unless anyone has heard otherwise), meaning that the best external GPU performance will only work at that speed. I'm guessing these boards (look at comparative Zen2 style 4800U 4x4 ) can only "fit" a x4 slot but it would have been much better if it was 4 lanes of PCI-E 4.0 bandwidth instead. Looking at some of the Intel NUCs, they seem to offer PCIe 4.0 spec, as well as USB4 / Thunderbolt 4 40gbps connectivity which is nice for eGPU among other uses. I do wonder why AMD could not have set Cezanne-U with PCI-E 4.0 lanes at least, if not Thunderbolt / USB4 style USB-C (I know Thunderbolt itself is a licensing thing, but USB-C 40gbps would have been nice), if Intel is putting these features even on their compact NUC devices?

Granted I know it is a niche use but it is kind of disappointing that Cezanne-U seems to lag behind on GPU and more importantly connectivity/chipset features vs Intel, despite their phenomenal CPU performance. Still, I'm waiting to see when Cezanne-U style NUCs (or even better, just the SoC / mobo alone) are actually able to be purchased and hope its soon.
N 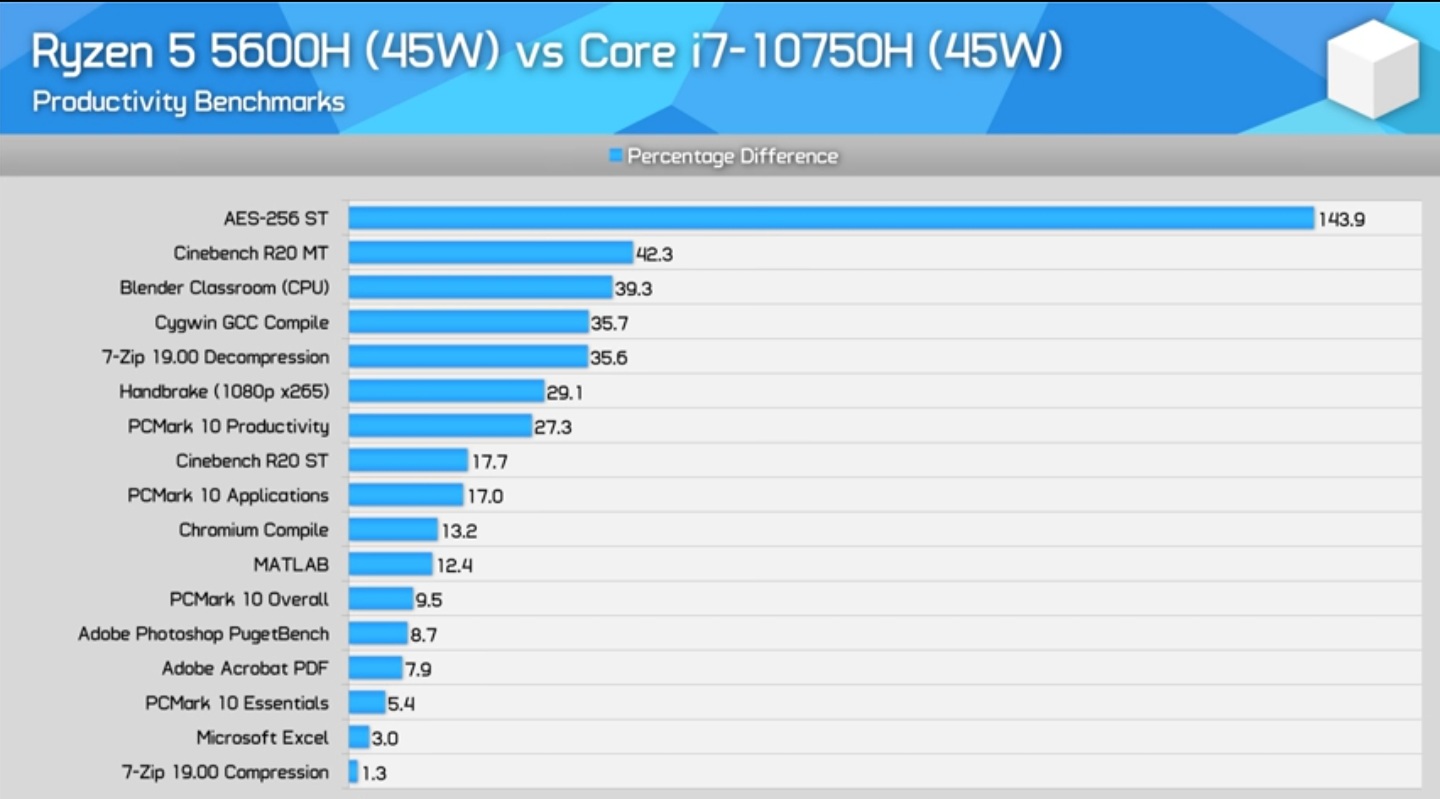 The new 6 core Cezanne OUTMATCHES the 6 core CML-H, though the upcoming 6 core TGL-H should match up well.

That said, the yet to be released mainstream 5600u will have no equal as Intel will not have anything past 4 cores in the 15w segment.
You must log in or register to reply here.
Share:
Reddit Pinterest Tumblr WhatsApp Email Share Link
Top