Altering others work for wallpaper - SFW/NSFW-ish, use caution (I read the rules to double check).

Remember several years back, decade +, and in desktop wallpaper thread, I think. someone, a model photographer posted one of his live works of woman wearing jeans without a shirt but had her arm covering her nips in his studio apartment and was OK to post. So hopefully this is OK as long as I censor it, right?

OK, so, I use live models and animated works as my desktop WPs as long as there are no men in them so I alter what I can if I like it and there are no other alt versions of them.

Deleted figure behind her, added earbuds and blue wire, filled in center part of straw, soda under her breasts and above legs.....
Might fix/darken the soda above her lower legs added, and need to blackout white background or make transparent to make it easier to add her other alts.

-Adding ice cube dropping in effects to have her a reason to look back.
--Using ice art on saved on trans layer from web, scaled down, colored to alpha to make it look like they're in glass. 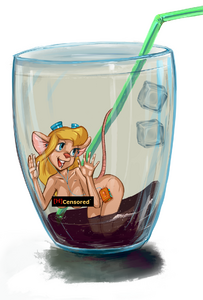 Ice 2. Using transparent ice on trans layer from web, rest same as above. 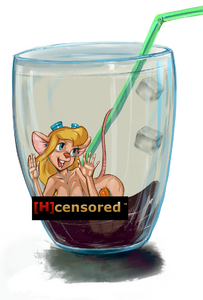 Ice 3. don't know about this effect. Same steps as Ice 1. 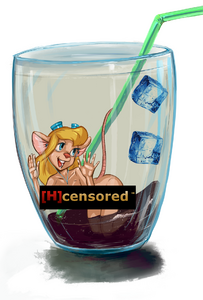