Many of us use the shower to excite our senses and snap out of last night's sleep. Now engineers in China have developed a 220V 30A heated shower head that is almost guaranteed to break the sleep cycle; maybe even permanently! Dubbed the "suicide shower" by users in Latin America, the simplistic device has a bare resistive wire directly connected to 220V main power. The ground wire connects to nothing as it uses the water running through the shower head as its connection point. When tested without the ground connected in the second video at the 7:15 marker, up to 125V was measured in the water; thus the reason for the "suicide shower" moniker.


The shower head is marked 5400 watts -- basic math for the 220 V at 30 A has us expecting more like 6600. Based on actual measurements, it looks like the high power coil is 9 ohms and you'll see in the video, he does the math not only to look at the power consumed but also how much power it should take to heat up water in an instant water heater arrangement like this. It was interesting to watch him measure the flow rate of the shower with a low tech method. The final answer is that the head really needs to draw much more power to really give you a hot shower.

Do people have nothing better to do
N

His voice cracked me up. You can tell he really didn't want to touch the water... nervous.

bigclivedotcom posted a YouTube video of this about 2.5 years ago. 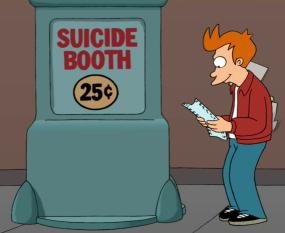 You have picked 'slow and painful'

What is the next model going to include, a toaster oven and a hair dryer?

I am guessing it has no UIL sticker on it !
E

Is it UL and CE approved?
V

I heard setting the toaster to bagel and dropping it in the tub plugged in heats the water in a few seconds...........

A hair dryer is a much more energy efficient way to heat water. Turn it on, drop it in the tub and viola,....hot water.
B

sneak attack on the rest of the world, or a form of population controll ?
D

A perfect gift for those people you wish weren't in your life.
J

Couldn't they use this for hunting lion fish?
C

When I lived in China, there was a similar device we had on our kitchen sink faucet. I don't think the electric circuitry was nearly as strong, but it did the similar thing of heating water on the fly.

We never opened it up, so not sure if it had the same lack-of-safety in the design, but it did the similar task. It was at least self-contained; I didn't have to wire it up to anything.
Last edited: Aug 29, 2018
S

As mentioned this is not uncommon in central America, my cousin told me about the janky shower he had in a hotel that involved electricity heating the water and if you touched the shower head it zapped you good.

That said WTF with all that physics in the first video, was he showing off? Just test the thing for current/voltage and call it a day.
C

I have used these during my two years living in Uruguay. Have been shocked many many times.

che said:
I have used these during my two years living in Uruguay. Have been shocked many many times.
Click to expand...

i am not shocked at all.

I predict no more than 3 weeks until we see a electrified shower challenge...
W

His voice is annoying.

Crazy though how when there's a base need all semblance of safety can go right out the window.
M

have I really been watching Clive for that long? Shit, the time flies on youtube.
P

got used to cold showers when living in panama, as everyone does there. saw these a few times, gave them a hard nope. cold showers are refreshing in a lot of those humid countries.
U

Ive used similar... No issues. They were grounded though.
T

It works, doesn't it?

I expected something more along the lines of...

dgz said:
I expected something more along the lines of...

I quote that scene once in a while. Usually when I don't quite get what someone is saying, I'll say "wait, you want me to drop the tape deck into the tub when white rabbit peaks?"

Occasionally I get a laugh, other times it's blank stares.
M

Damn, sometimes I really need a good shower but I sure don't want the dirt shocked off me.

Seems legit. What could possibly go wrong with a 30a 220v heater coil inside your shower head?
A

Reminds me of this.

I forgot about that guy! . You may have just wasted my time sometime in the future.
B