The component you have marked as the "memory controller" is an inductor. It's just a dumb spool of wire inside that ferrite overmolding, and is not part of your problem.

Look at the component I've marked in blue, here: 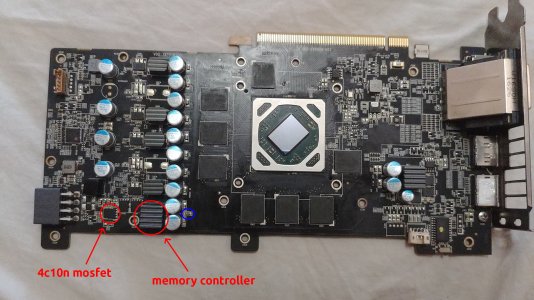 You'll see it has two terminals - one on the left and one on the right, when you look at the card in the same orientation as your photo. Take a resistance measurement from each terminal, by putting your multimeter's red probe on the terminal, and the black probe on the housing of the DVI connector.

1.5 ohms on both sides means you have a short to ground. Your next step is to find the short.

Do you have the ability to inject voltage into the circuit with a bench power supply?
R

Set the voltage of the power supply to 1.5V or less. Do not exceed 1.5V. Limiting the amperage is less important, but start around 10 amps and see if that's enough. If not, go higher.
R

grofmarton said:
Hm, I was trying to introduce 1.5V and the current went up to 1A. I let it warm up for a few minutes, but nothing, I didn’t feel anything warm.

Maybe I should try to use freezer spray? Although it is quite expensive.
Click to expand...

With the right safety precautions, you can use isopropyl alcohol instead of freeze spray. You put a little bit of it on the board in the area you suspect lies, and look for it evaporating. Edit: You can also use a thermal camera, if you have one.

Also, you'll need a lot more than one amp. 1.5V times 1A is only 1.5 watts. You'll need more like 20 or 30 watts if you don't have a really good thermal camera. Dial the power supply up to 10 amps and see what happens.

With the coil removed, solder the positive lead to the pad where the coil was - the one you're probing in that second photo. Start at like 5A, and go up to 10 if you don't find anything. Keep in mind that most of the replaceable components in the memory circuit tend to be on the back of the board.
Last edited: Apr 22, 2021
R

grofmarton said:
I suspect the GPU, so I tried the PCI-E 16x connector diode measurement again, more carefully to see if I missed something and I think I found something. On side A, #81 pin is faulty. I attached a picture.

Given the mysterious memory rail short (those are the worst), I'd probably move on to an easier case at this point. Keep in mind that it's also possible for the short to occur inside the board itself. In those cases, you're unlikely to find it without an X-ray machine, and you can't really repair it, even if you did.
You must log in or register to reply here.
Share:
Reddit Pinterest Tumblr WhatsApp Email Share Link
Top