A buddy of mine wants me to build him a complete, long lasting gaming machine that’ll play everything maxed out, with new monitor for $1600 budget. It’ll primarily be a gaming box but also a general purpose home use PC for anything and everything. He holds onto his equipment a long time. He’s rocking a hex core x58 Xeon, 12GB RAM, and a 970 right now that I built him in the past. He wants a solid upgrade from that. All in at $1600.

Ryzen 2700 CPU with SPIRE heatsink and fan - $230 (I want an 8 core CPU because the next generation Xbox and Sony consoles are using 8 Core Ryzens - this should allow for greatest gaming longevity, matching core count with the upcoming consoles. I'd choose Intel for the clock speed improvement and IPC, but buying an 8 Core/16 thread intel would swing the price up at least $300 and that isn't in this budget)
https://www.microcenter.com/single_...&MccGuid=cf519e30-c48a-4608-acca-710302e71efb

AMD Vega 64 - $370 (nothing faster from AMD right now, and the Radeon VII will be $700 and is out of budget. The Vega 64 is basically NVidia 1080 level performance these days, and is cheaper than a 1080 - plus native freesync is ?potentially? more reliable than Nvidia's recent announcement that they will support freesync?)
https://www.ebay.com/itm/PowerColor...AAOSwHIlZ0Oi9:rk:4:pf:0&LH_ItemCondition=1000

This totals to $1462, but doesn’t include tax. Some of this will be purchased at microcenter so there will be tax. It should come out a hair under $1600ish.

Giving the requirement for it to be a long running gaming machine with the best performance for the dollar, and as much future proofing as possible for the budget, does anyone have any alternate suggestions I should consider?
Last edited: Jan 24, 2019
A

Looking at prebuilt machines to see how that compares -- here's a couple options:

Another option from Ibuypower

Looks like the Vega64 is the faster card by maybe 15-20%, but RTX2060 might have more reliable drivers on some older or lesser known indie games. The RTX2060 seems to line up closer to the Vega56 in performance.

You know, another option here:

Keep the existing computer. The x58 is old, but it's not bad, especially if it can handle a modest overclock.

Throw that entire budget at new monitor + video card. $500-$1000 (assuming ~$500+ for monitor) doesn't go nearly as far on GPU power as it used to, but it will still get you into an entirely new class of power than a Vega64/RTX2060. It may bottleneck on that platform some, but I think the overall experience would be better than new platform with weaker GPU, especially if the aim is to max everything at Ultrawide 2K or hit 4K resolutions.

Then, when you get another chunk of money later on, the rest of the computer comes up around that GPU/monitor.
Last edited: Jan 24, 2019
A

I offered that as a viable option. Buy a 1080TI for ~ $500 used and a nice monitor and it should breath new life into his existing. He replied that he preferred just getting something all new. He'll keep his old PC to give to his kids and do some family LAN gaming.

He has the Xeon x5660 hex core CPU which is still pretty darn decent all these years later. He can't overclock his chip though because his motherboard doesn't allow for overclocking - so it's just at 2.8Ghz hex core, and by the time you buy a more capable x58 motherboard the gig is up on saving money. Enthusiast X58 motherboards command a rather outrageous premium now.

Stay away from the Western Digital Blue. Use Slickdeals.net to find better SSD prices. I think I saw a NVMe 512gb SSD for around $65 on there today.

Here is something much better an additional $12 dollars. Crucial NVMe 500GB for $75

The drive you actually have linked is not NVMe ... it's sata3. WD "blue" anything is their lowest performance tier.

However, protip about Microcenter and their house brand Powerspec, EVGA and Powerspec PSU's are the same PSU's ( ask for the most knowledgeable BYOC guy there and he will confirm this ) ... I think you can get a 850watt gold Powerspec for around $69 or $79. So that's another $10 to $20 savings. Maybe. Depends if the other PSU you listed was tax free. The only difference is that Powerspec PSU uses slightly less pretty cabling, I think.

Great deal performance wise on the Vega .. def get that if you can for the amount of money you have it budgeted for. That GPU is kinda close but behind the 1080 so that's a great deal IMHO.

As far as the case goes I very VERY higly recommend the NZXT 500 for $69 ... it's easily a steal. It's an amazing case for cheap. It's powder coated steal with tempered glass. Bad ass case for super cheap.

That gives you $30 to put toward something else.

Consider the NVMe drive I linked and case I also linked and I think you have a banging system.

Build looks good overall. I see where you can cut some additional fat but it would probably not be worth the hassles that I go thru.

I also strongly disagree with saving your old system. Dude, that shit is old as fck. Money is easy come easy go. In the grand scheme of things, $1600 is not a lot of money unless you have a life style that is full of waste and bad money decisions. I don't like to hear people speak from a broke or frugal point of view when it concerns a passion and love in any given hobby. Also, you don't want to prop up a condemned foundation when you know it's going to collapse eventually. I love building new systems for myself and do so at least twice a year.
Last edited: Jan 24, 2019
A

Bought a new EVGA 1080 FTW from TahoeDust in the FSFT forums for $350. That'll do real nicely for the videocard.

Only problem I ran into was the MOBO might come out from case making an install of a RAD at top not do-able. But I installed a EVGA CLC 280mm up front.( a bit tight but very do-able)
Last edited: Jan 26, 2019
A

I actually thought I was buying NVME with that Crucial drive I bought. Derp.

But I looked at some benchmarks with trepidation (because Newegg shipped fast and I already have the Crucial m.2 drive in hand), and fortunately it really just doesn't matter.

That Crucial MX500 is right up there at the top of the pack anyway.
https://www.tweaktown.com/articles/8661/best-ssd-gaming-over-120-ssds-tested/index2.html

and compared to a Western Digital Black NVME:

14.75 seconds loading time on the Crucial m.2 vs. 14.46 seconds with the WDBlack NVME on the same test. (The WD Black NVME cost's over twice as much!)

That amount of time is immaterial to me. I'd rather have saved the $20 as compared to the $75 500GB NVME at least for gaming purposes.

Reading up a bit it appears that NVME is really most useful for database operations - something this particular friend will never be doing.

Build is now all picked. Here's the final list. I've now ordered everything.

We broke budget very slightly but on the willing request of my buddy to pick up a 1TB SSD as a gaming drive so he didn't have to re-use his 2TB platter drive on this new machine, and to pick up some RGB fans that were on a newegg flash sale to make it sooo purdy. Had we not added the fans and the extra gaming hard-drive we would have came in well under budget!

It'll be a nice looking and performing machine!

Let's get some pictures of the build
S

How is that monitor working out?
A

Stryke1983 said:
How is that monitor working out?
Click to expand...

It’s actually well worth the cost. Not all the components are here yet, but I pulled that out of the box and used it for a couple gaming sessions on my PC. I have the alienware aw3418dw, and it’s a nicer display overall, (mostly because for the alienware’s adjustable stand) but it’s 2xs the cost of the MSI 34” and it’s not 2xs as nice for sure.
Last edited: Feb 5, 2019
A

SixFootDuo said:
Let's get some pictures of the build
Click to expand...

Building it tonight and tomorrow. My buddy asked that I supervise him building it.

That Cougar case looks really nice. That’s the first Cougar case I’ve seen in person and it’s got it made cosmetically.
A 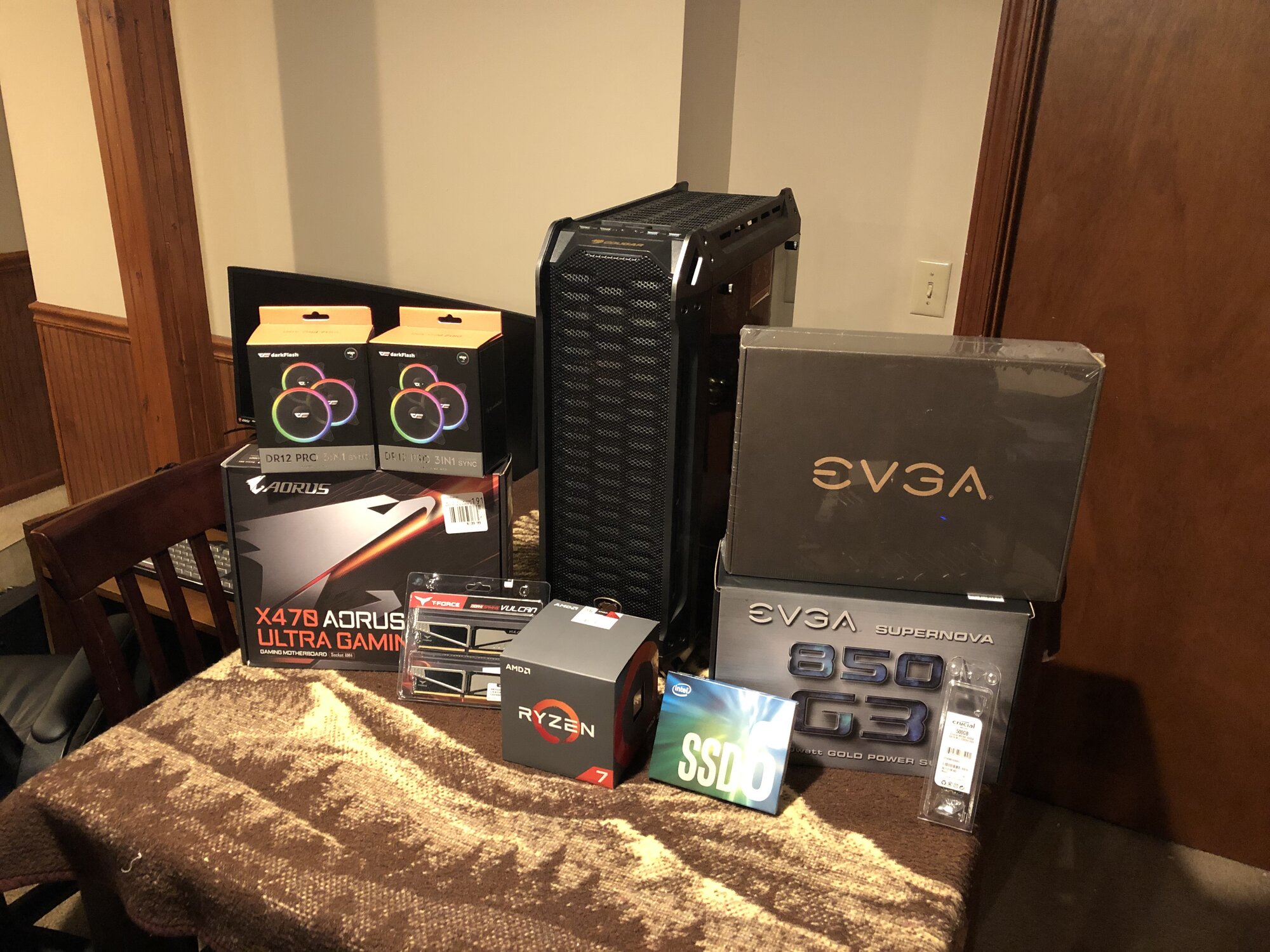 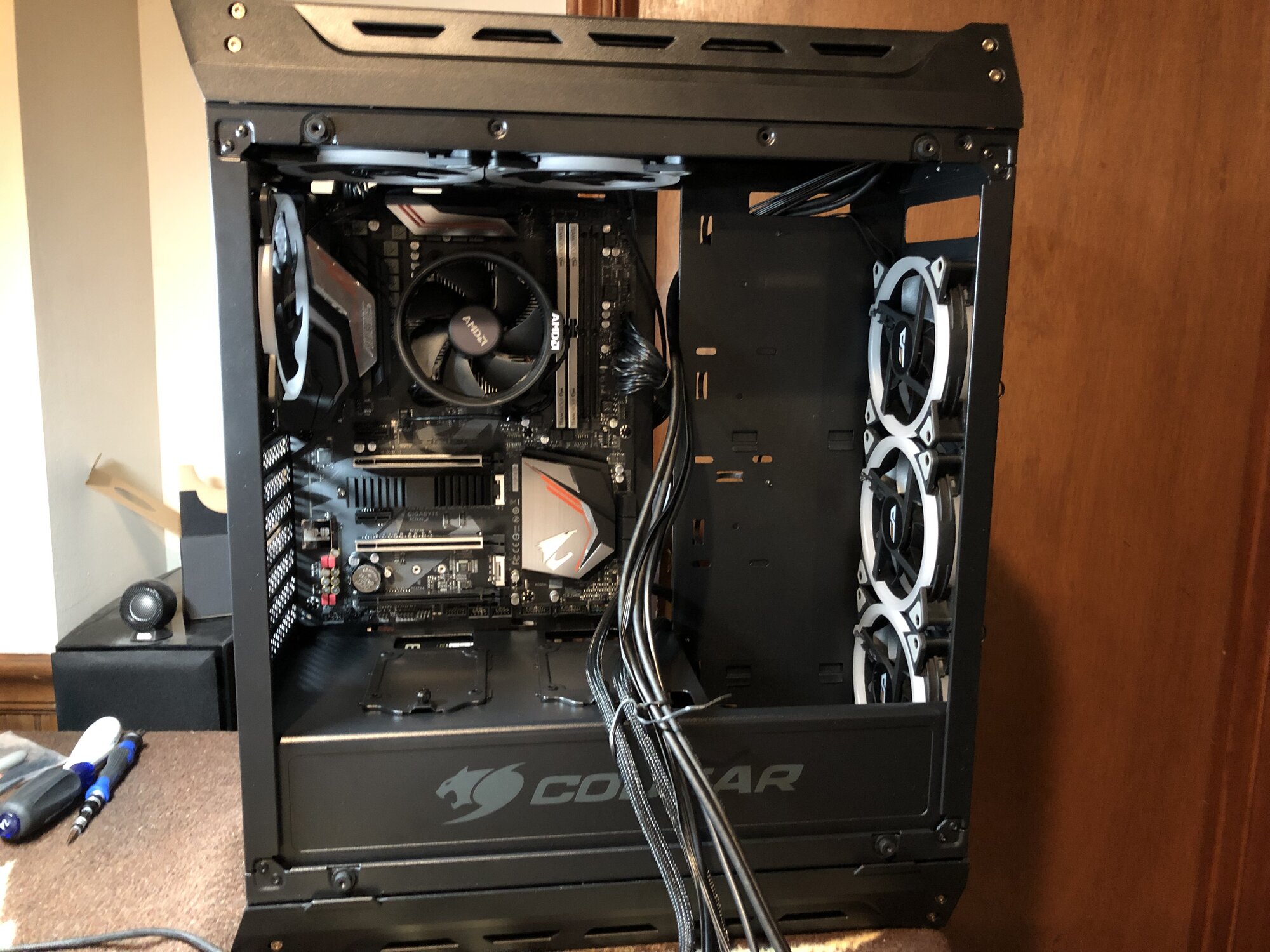 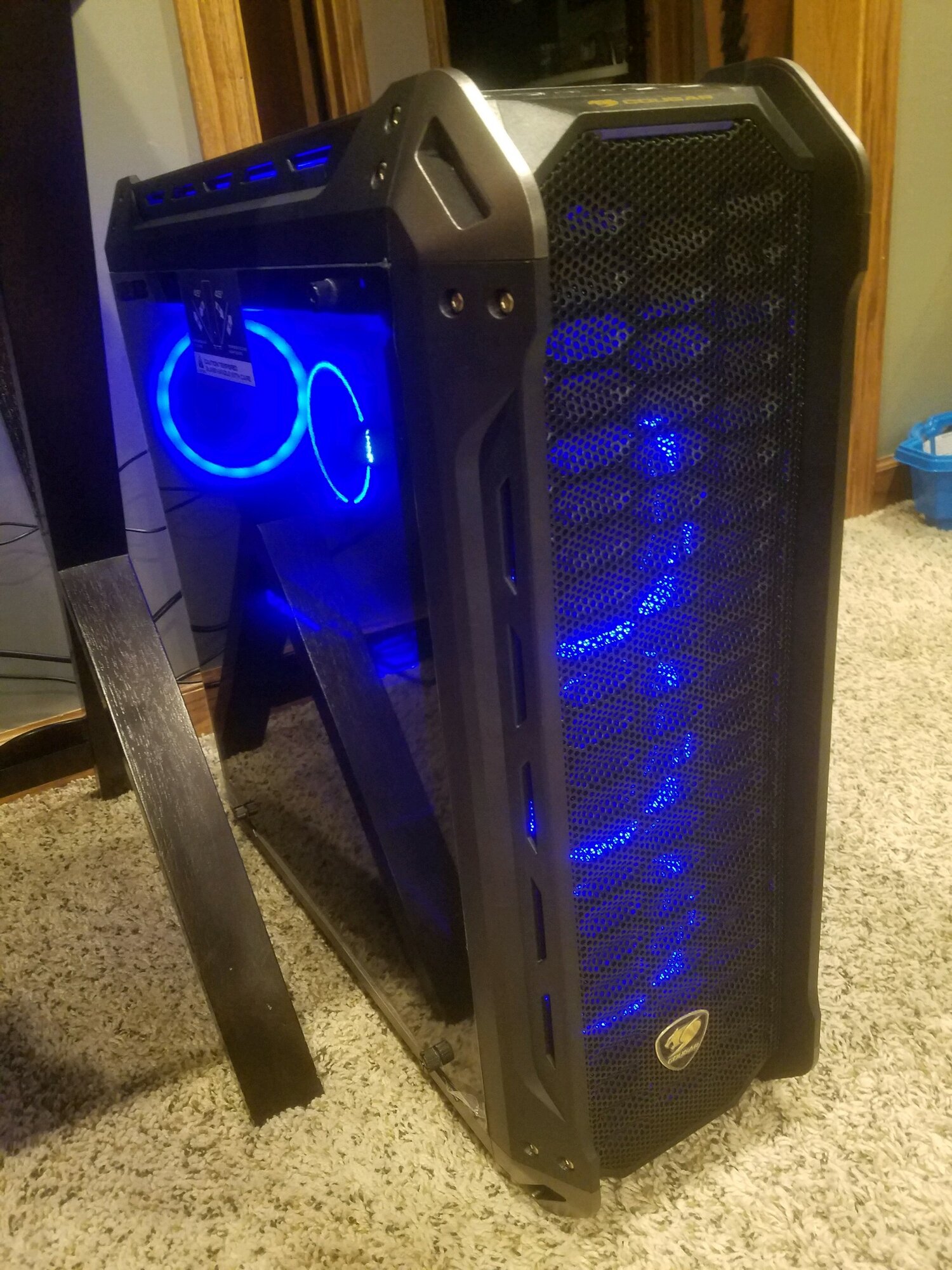 The Intel 660P is NVME and faster than the Sata MX500, I would put the OS on the Intel drive.
A

It was happenstance that everything we purchased turned out to have brushed aluminum, because I was looking for deals, but you note the motherboard has it, the RAM has it, and the EVGA 1080 FTW (not pictured) has it. It’s one of the better looking PCs I’ve ever made. I really like the cosmetics of this setup! The cougar case was a pleasure to work with and seemed well made. The RGB fans are really nice. All six (and more) can be controlled by one controller or all synced to the motherboards control via a three pin connection. It also includes a remote that isn’t line of sight. You can control fan noise and there is no whining at slow speeds. They are very quiet on low speed. I’d definately buy more of this fans if they were still on sale. I regret not buying a set for myself and more for future builds.

All in all a great setup and my friend was very pleased when he picked it up today after he test drove it. That monitor is nice in user mode and even without Gsync exhibits no noticable/observable tearing in gaming in a range of 60FPS to 100FPS with the single game he tried, PubG. 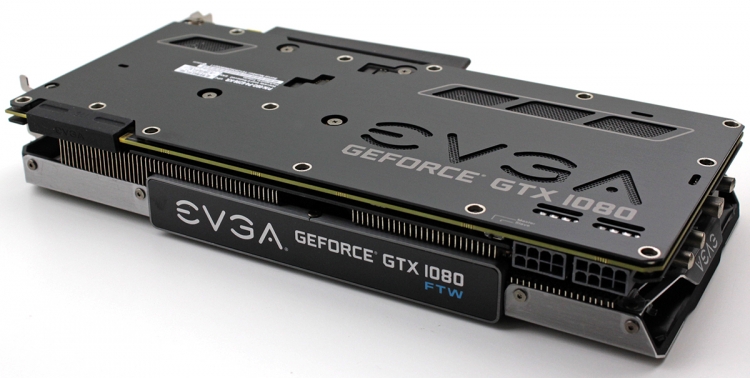